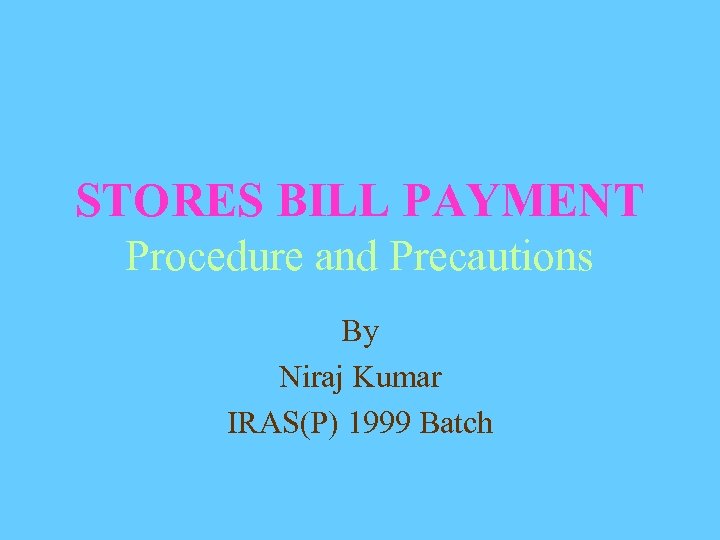 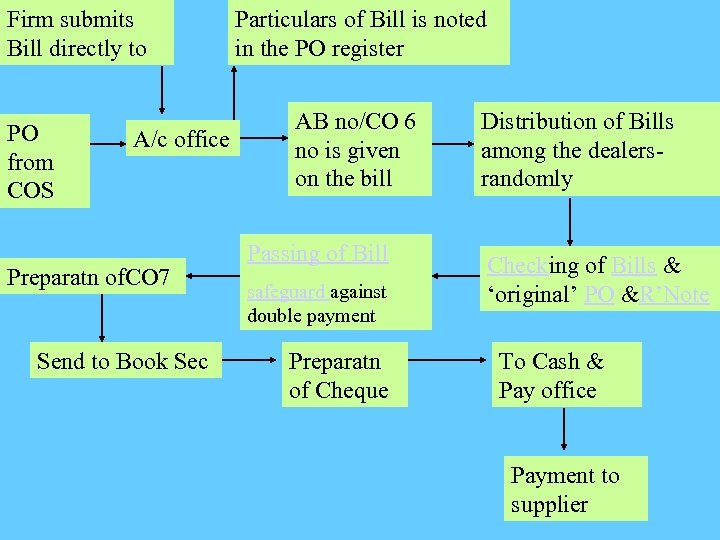 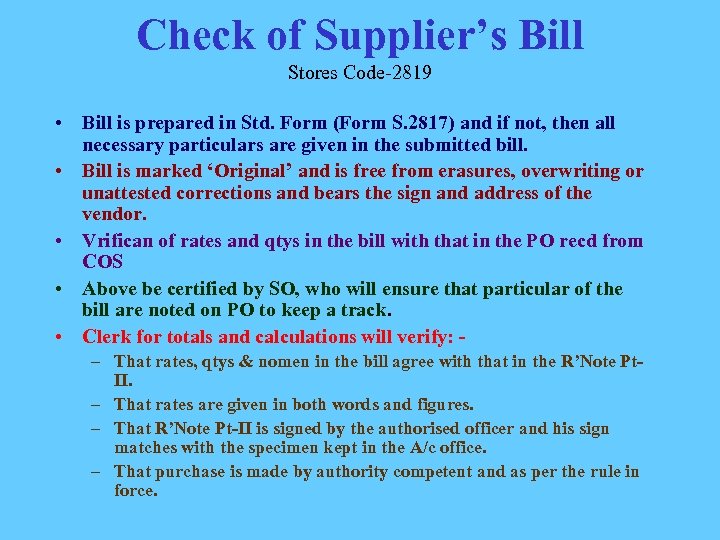 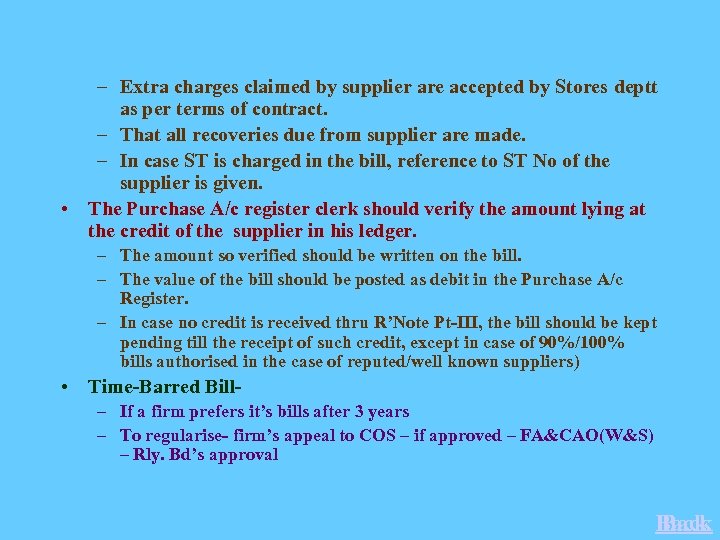 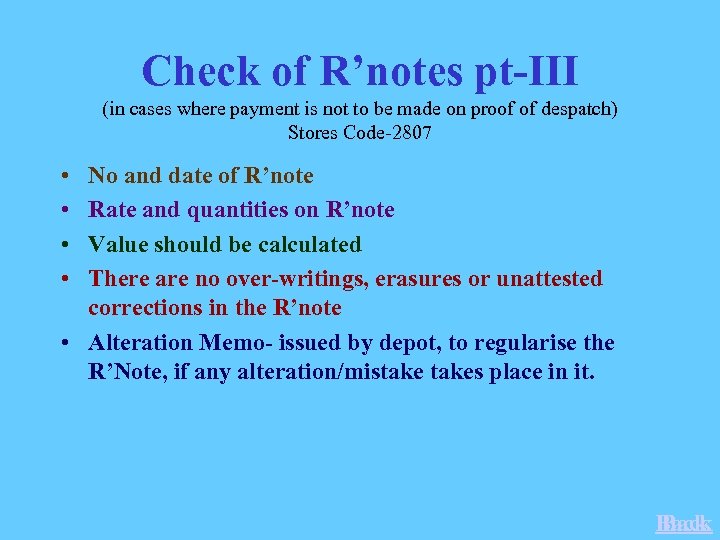 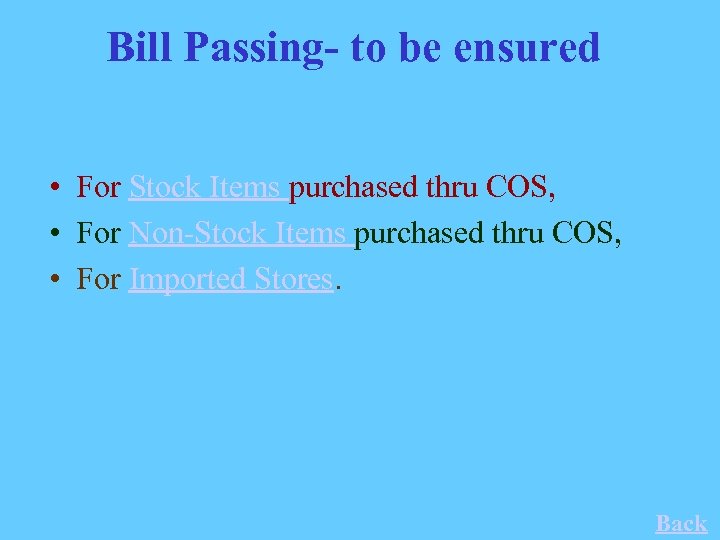 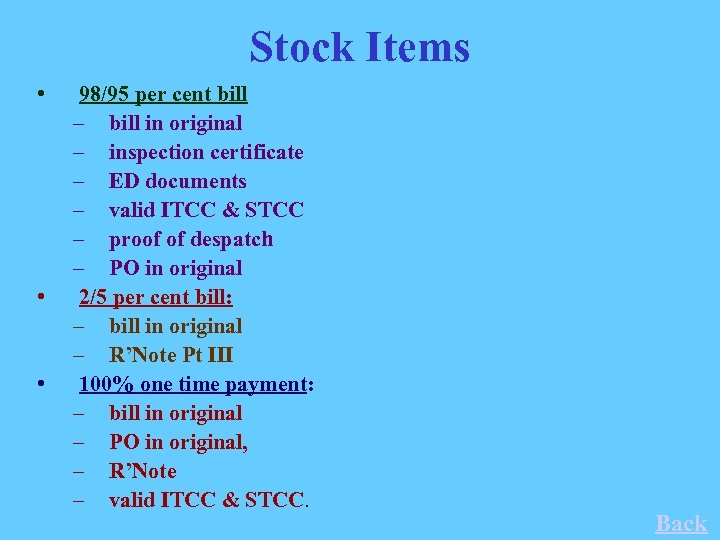 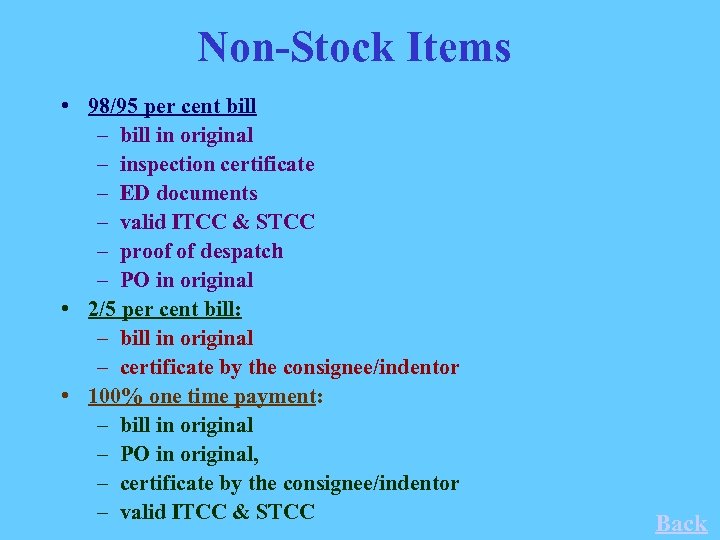 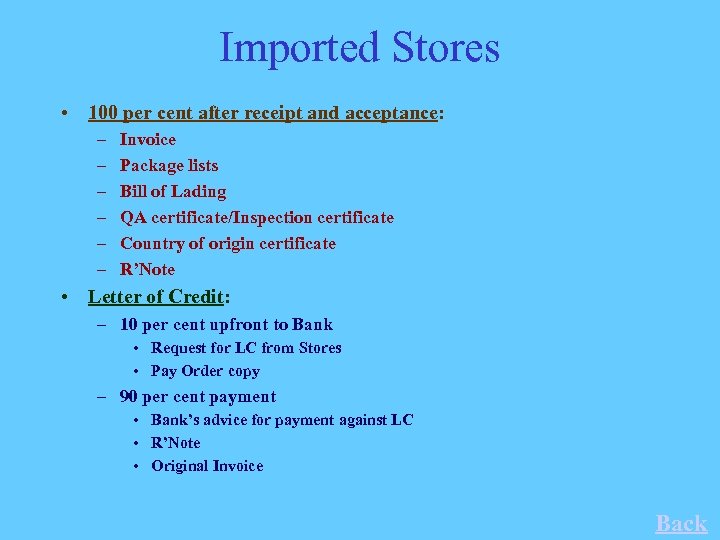 Firm submits Bill directly to PO from COS A/c office Preparatn of. CO 7 Send to Book Sec Particulars of Bill is noted in the PO register AB no/CO 6 no is given on the bill Passing of Bill safeguard against double payment Preparatn of Cheque Distribution of Bills among the dealersrandomly Checking of Bills & ‘original’ PO &R’Note To Cash & Pay office Payment to supplier

Check of Purchase Order Stores Code-2805 • Continuity in the no. of P. O. • Sanction of the Competent Authority. • P. O. do not infringe with the Purchase Policy Rules as given in Ch. III, Stores code-I • Items in P. O. are not that need to be purchased thru DGS&D • No variation in rate from time to time for same kind of item • Rates, qty, DP & other particulars are as per contract. • No erasures, overwriting or unattested corrections in P. O. • P. O. is signed by an authorized Gaz officer of Stores • Validity of D. P. , if expired, COS’s Modifican Advice(MA) on firms’ appeal. • Provision of fund vis-à-vis Fiscal year and Exchequre Back

Check of Supplier’s Bill Stores Code-2819 • Bill is prepared in Std. Form (Form S. 2817) and if not, then all necessary particulars are given in the submitted bill. • Bill is marked ‘Original’ and is free from erasures, overwriting or unattested corrections and bears the sign and address of the vendor. • Vrifican of rates and qtys in the bill with that in the PO recd from COS • Above be certified by SO, who will ensure that particular of the bill are noted on PO to keep a track. • Clerk for totals and calculations will verify: – That rates, qtys & nomen in the bill agree with that in the R’Note Pt. II. – That rates are given in both words and figures. – That R’Note Pt-II is signed by the authorised officer and his sign matches with the specimen kept in the A/c office. – That purchase is made by authority competent and as per the rule in force.

– Extra charges claimed by supplier are accepted by Stores deptt as per terms of contract. – That all recoveries due from supplier are made. – In case ST is charged in the bill, reference to ST No of the supplier is given. • The Purchase A/c register clerk should verify the amount lying at the credit of the supplier in his ledger. – The amount so verified should be written on the bill. – The value of the bill should be posted as debit in the Purchase A/c Register. – In case no credit is received thru R’Note Pt-III, the bill should be kept pending till the receipt of such credit, except in case of 90%/100% bills authorised in the case of reputed/well known suppliers) • Time-Barred Bill– If a firm prefers it’s bills after 3 years – To regularise- firm’s appeal to COS – if approved – FA&CAO(W&S) – Rly. Bd’s approval Back

Check of R’notes pt-III (in cases where payment is not to be made on proof of despatch) Stores Code-2807 • • No and date of R’note Rate and quantities on R’note Value should be calculated There are no over-writings, erasures or unattested corrections in the R’note • Alteration Memo- issued by depot, to regularise the R’Note, if any alteration/mistakes place in it. Back

Safeguards against double payment • No bill is passed for payment unless a credit for the amount billed for exists in the Purchase A/c register. • AB no/CO 6 no of the bill is quoted and value of the bill is posted as debit against the credit in the Purchase A/c register from R’Note pt-III • Pt-II of the R’Note received with bill is punched and defaced so that duplicate claims are not passed. • Duplicate copies of Part II of the Receipt Note should not in any circumstances be issued to the suppliers by the depots. • Particulars of the bill are noted on the PO to avoid that a duplicate bill is not received for the same qty for which the bill has already been passed. Back