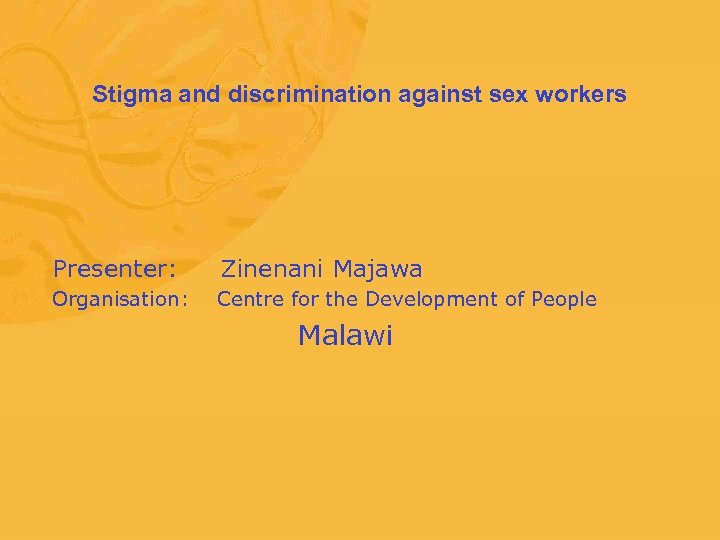 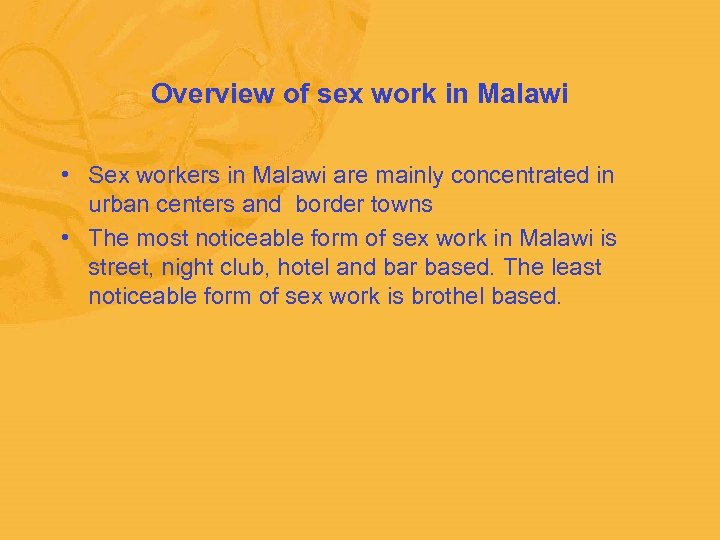 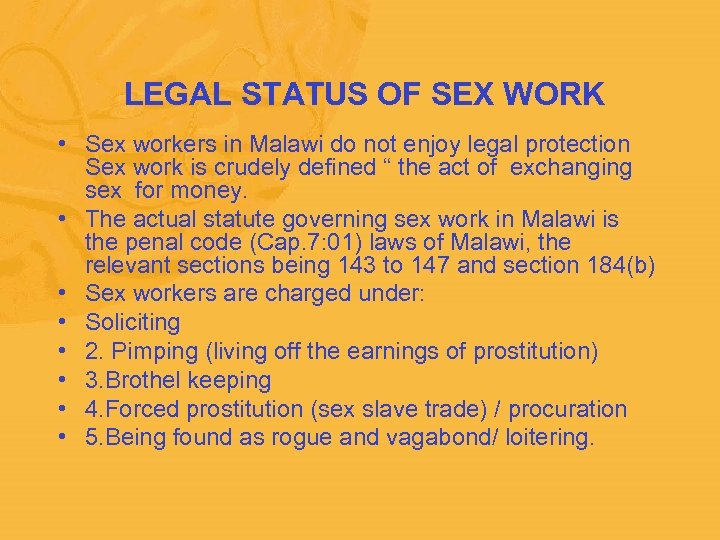 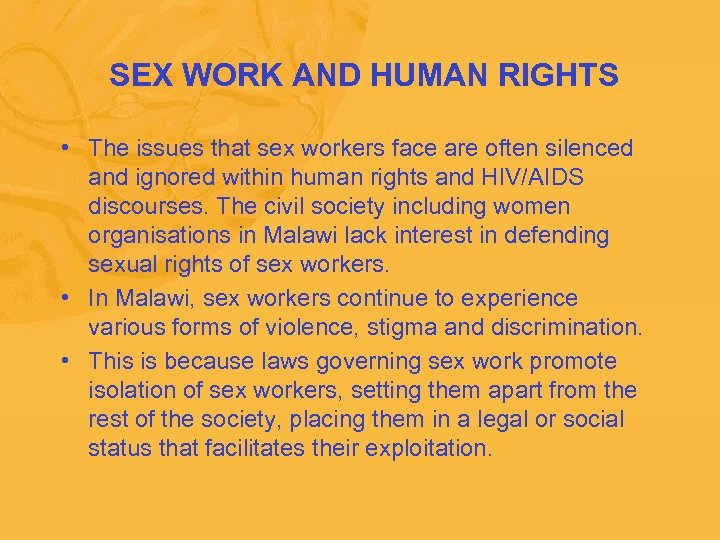 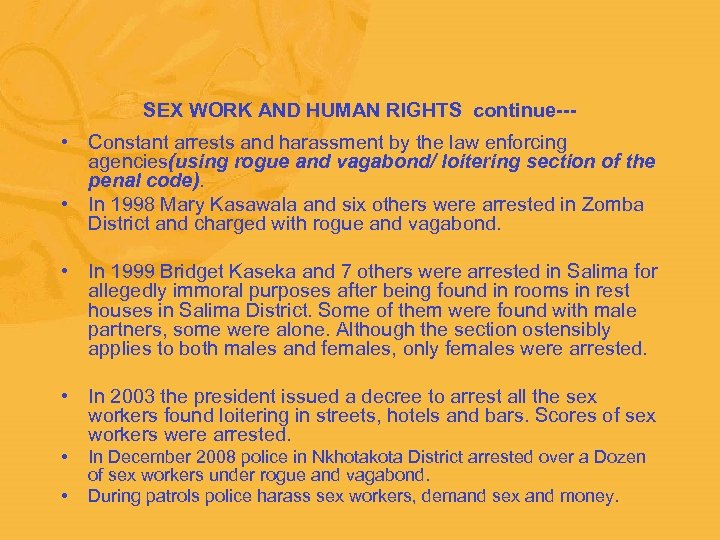 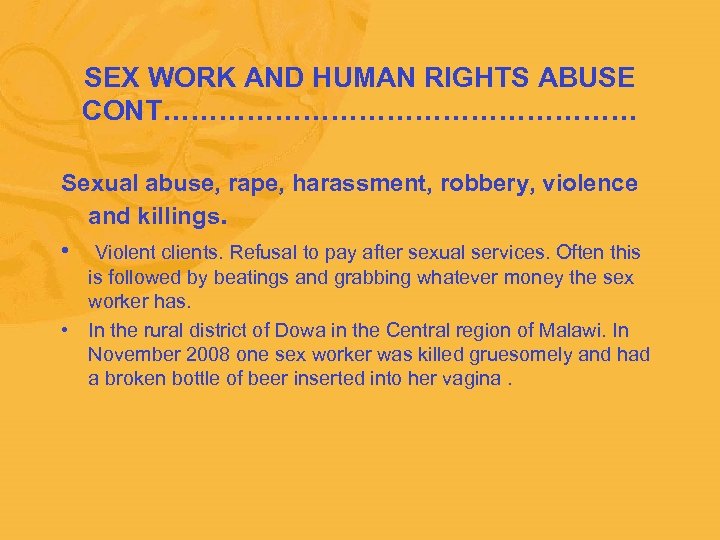 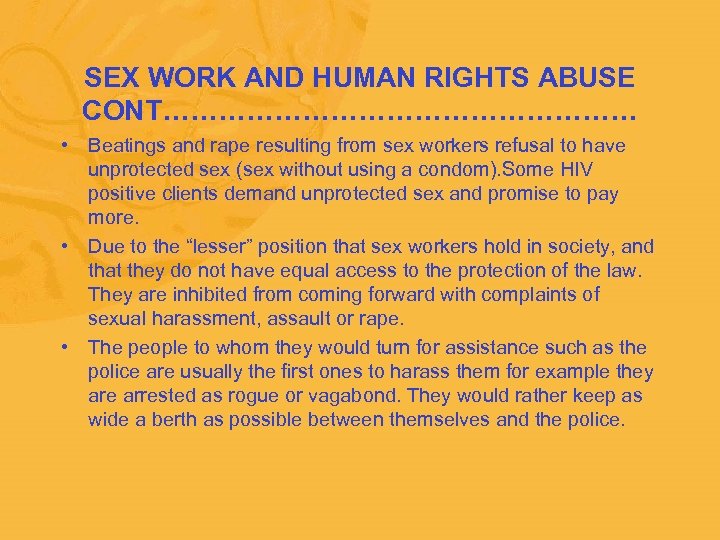 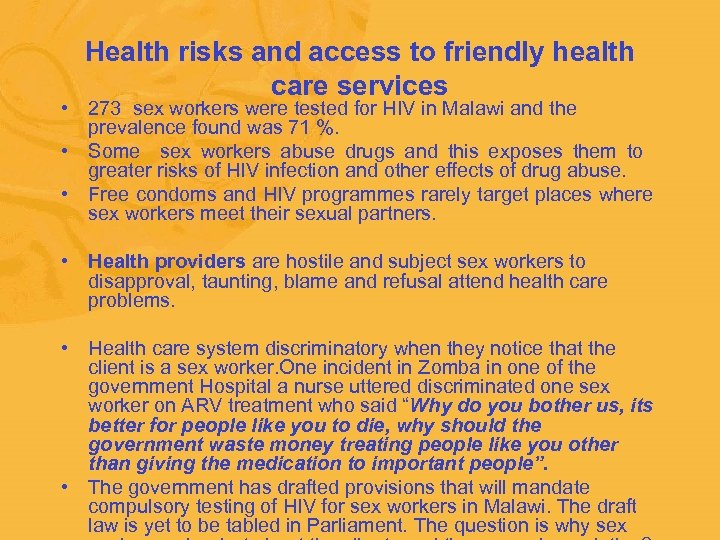 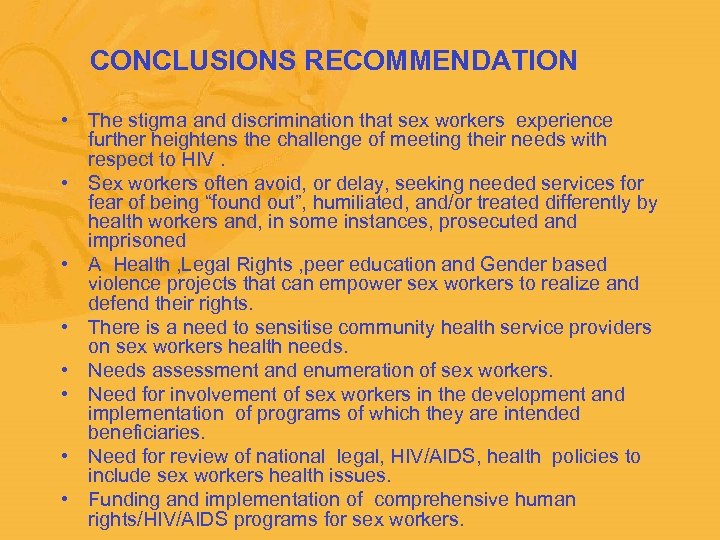 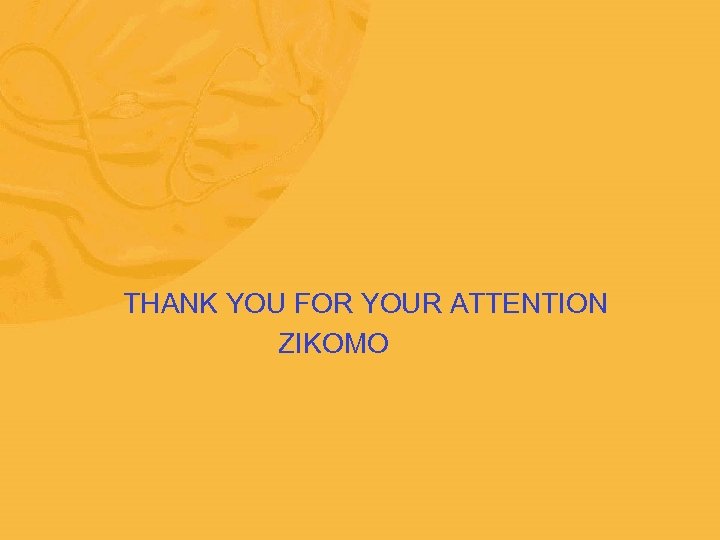 LEGAL STATUS OF SEX WORK • Sex workers in Malawi do not enjoy legal protection Sex work is crudely defined “ the act of exchanging sex for money. • The actual statute governing sex work in Malawi is the penal code (Cap. 7: 01) laws of Malawi, the relevant sections being 143 to 147 and section 184(b) • Sex workers are charged under: • Soliciting • 2. Pimping (living off the earnings of prostitution) • 3. Brothel keeping • 4. Forced prostitution (sex slave trade) / procuration • 5. Being found as rogue and vagabond/ loitering.

SEX WORK AND HUMAN RIGHTS • The issues that sex workers face are often silenced and ignored within human rights and HIV/AIDS discourses. The civil society including women organisations in Malawi lack interest in defending sexual rights of sex workers. • In Malawi, sex workers continue to experience various forms of violence, stigma and discrimination. • This is because laws governing sex work promote isolation of sex workers, setting them apart from the rest of the society, placing them in a legal or social status that facilitates their exploitation.

SEX WORK AND HUMAN RIGHTS continue--- • Constant arrests and harassment by the law enforcing agencies(using rogue and vagabond/ loitering section of the penal code). • In 1998 Mary Kasawala and six others were arrested in Zomba District and charged with rogue and vagabond. • In 1999 Bridget Kaseka and 7 others were arrested in Salima for allegedly immoral purposes after being found in rooms in rest houses in Salima District. Some of them were found with male partners, some were alone. Although the section ostensibly applies to both males and females, only females were arrested. • In 2003 the president issued a decree to arrest all the sex workers found loitering in streets, hotels and bars. Scores of sex workers were arrested. • • In December 2008 police in Nkhotakota District arrested over a Dozen of sex workers under rogue and vagabond. During patrols police harass sex workers, demand sex and money.

SEX WORK AND HUMAN RIGHTS ABUSE CONT……………………… Sexual abuse, rape, harassment, robbery, violence and killings. • Violent clients. Refusal to pay after sexual services. Often this is followed by beatings and grabbing whatever money the sex worker has. • In the rural district of Dowa in the Central region of Malawi. In November 2008 one sex worker was killed gruesomely and had a broken bottle of beer inserted into her vagina.

SEX WORK AND HUMAN RIGHTS ABUSE CONT……………………… • Beatings and rape resulting from sex workers refusal to have unprotected sex (sex without using a condom). Some HIV positive clients demand unprotected sex and promise to pay more. • Due to the “lesser” position that sex workers hold in society, and that they do not have equal access to the protection of the law. They are inhibited from coming forward with complaints of sexual harassment, assault or rape. • The people to whom they would turn for assistance such as the police are usually the first ones to harass them for example they are arrested as rogue or vagabond. They would rather keep as wide a berth as possible between themselves and the police.

Health risks and access to friendly health care services • 273 sex workers were tested for HIV in Malawi and the prevalence found was 71 %. • Some sex workers abuse drugs and this exposes them to greater risks of HIV infection and other effects of drug abuse. • Free condoms and HIV programmes rarely target places where sex workers meet their sexual partners. • Health providers are hostile and subject sex workers to disapproval, taunting, blame and refusal attend health care problems. • Health care system discriminatory when they notice that the client is a sex worker. One incident in Zomba in one of the government Hospital a nurse uttered discriminated one sex worker on ARV treatment who said “Why do you bother us, its better for people like you to die, why should the government waste money treating people like you other than giving the medication to important people”. • The government has drafted provisions that will mandate compulsory testing of HIV for sex workers in Malawi. The draft law is yet to be tabled in Parliament. The question is why sex

CONCLUSIONS RECOMMENDATION • The stigma and discrimination that sex workers experience further heightens the challenge of meeting their needs with respect to HIV. • Sex workers often avoid, or delay, seeking needed services for fear of being “found out”, humiliated, and/or treated differently by health workers and, in some instances, prosecuted and imprisoned • A Health , Legal Rights , peer education and Gender based violence projects that can empower sex workers to realize and defend their rights. • There is a need to sensitise community health service providers on sex workers health needs. • Needs assessment and enumeration of sex workers. • Need for involvement of sex workers in the development and implementation of programs of which they are intended beneficiaries. • Need for review of national legal, HIV/AIDS, health policies to include sex workers health issues. • Funding and implementation of comprehensive human rights/HIV/AIDS programs for sex workers.

THANK YOU FOR YOUR ATTENTION ZIKOMO