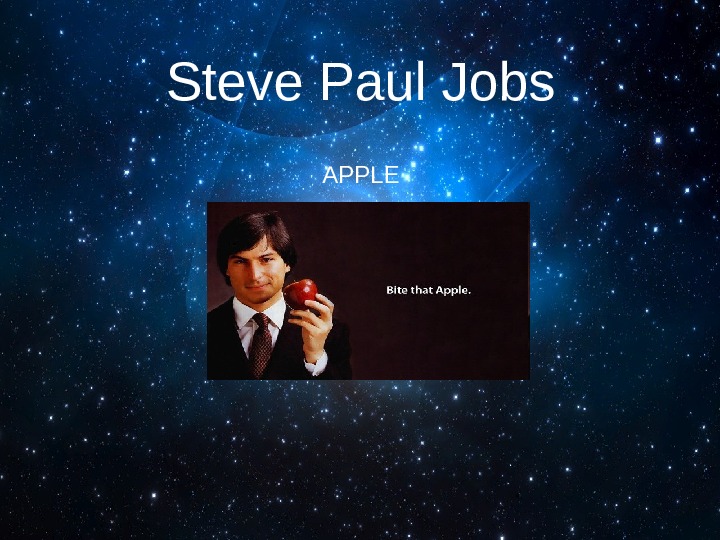 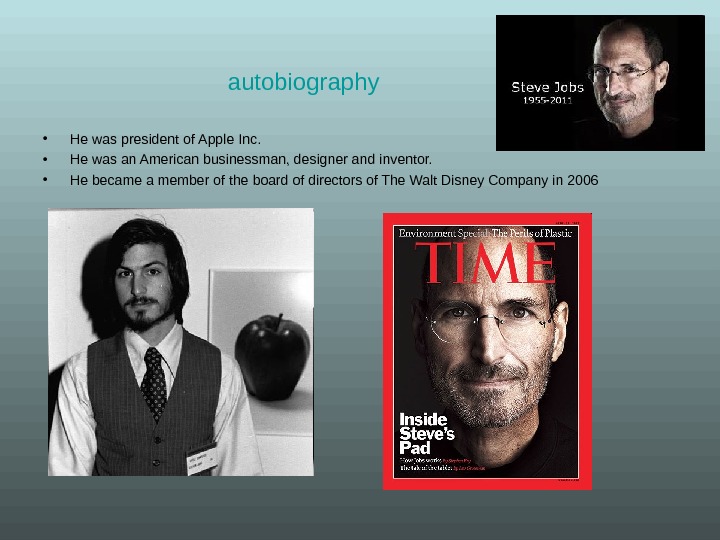 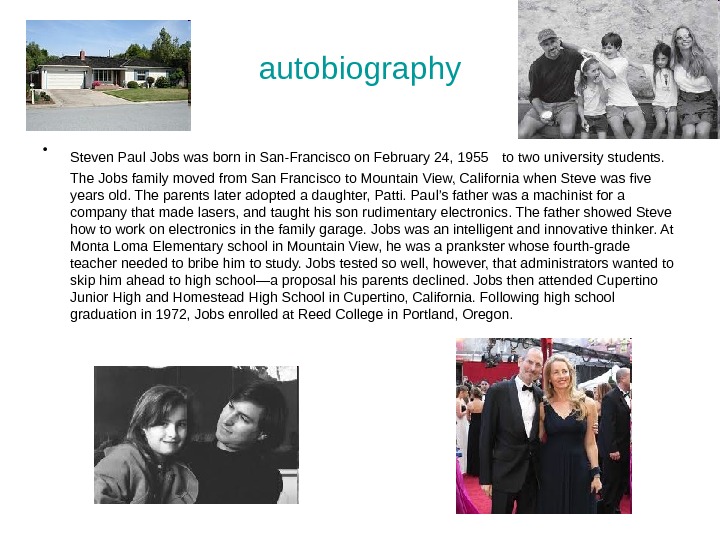 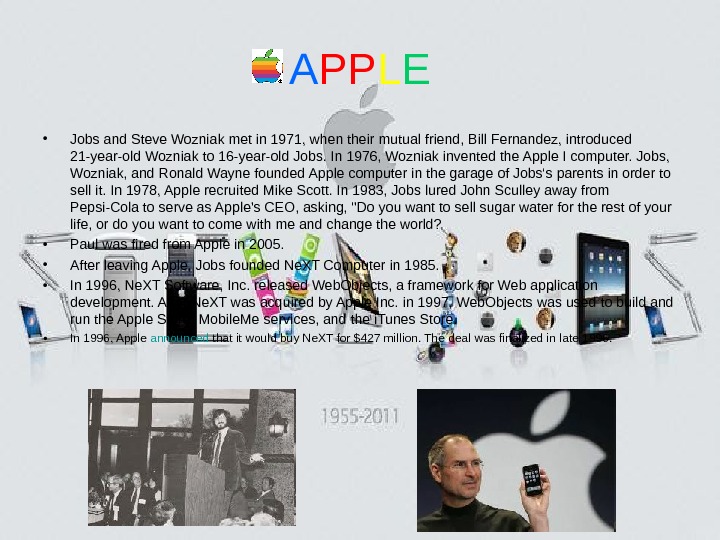 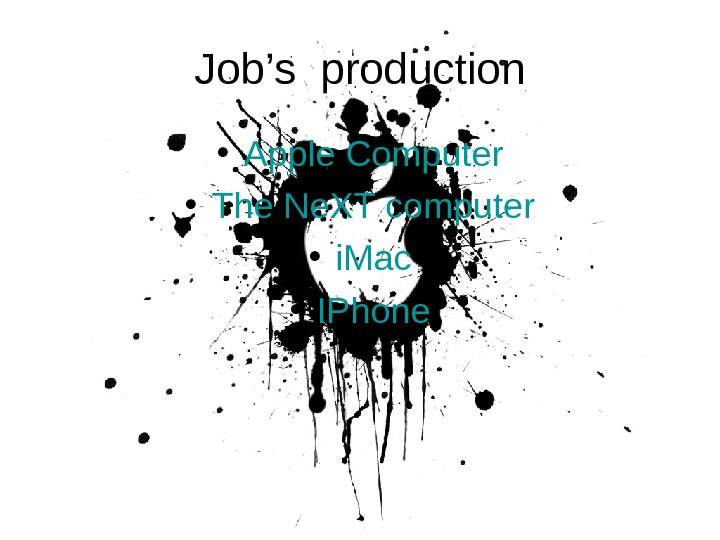 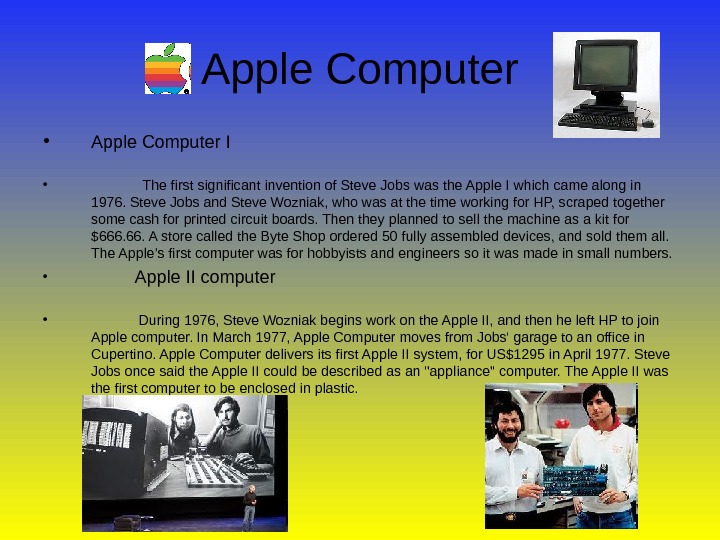 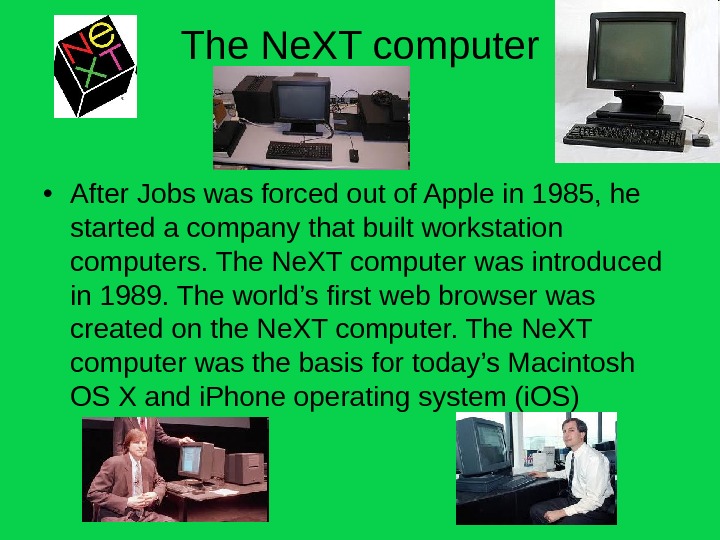 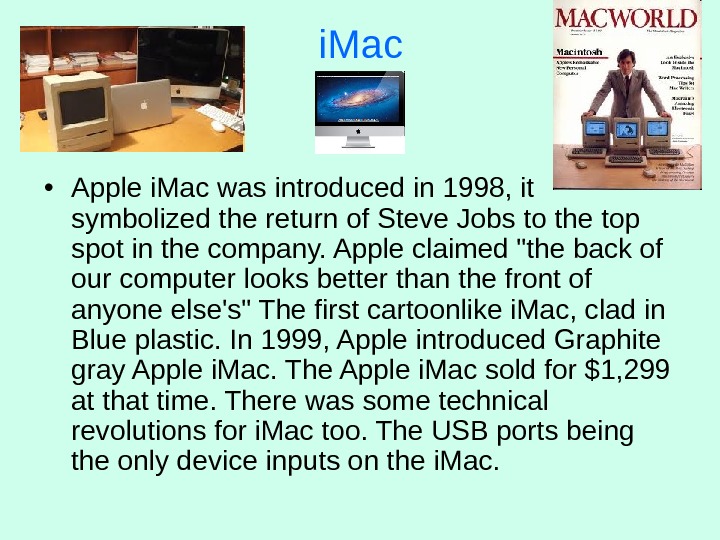 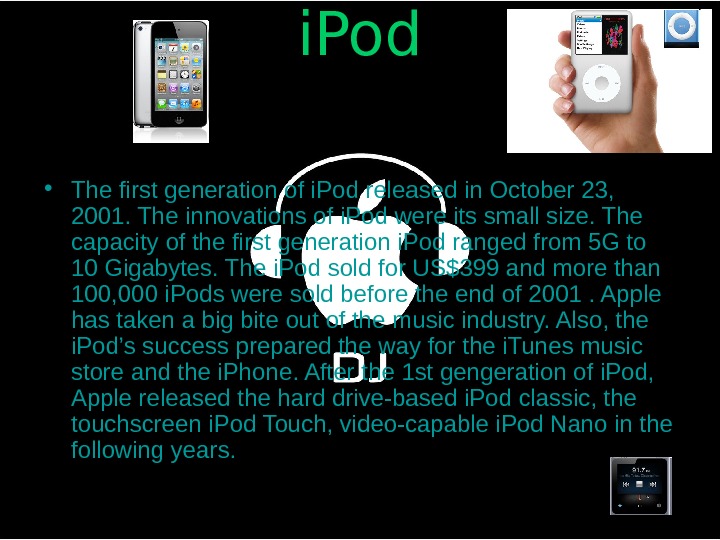 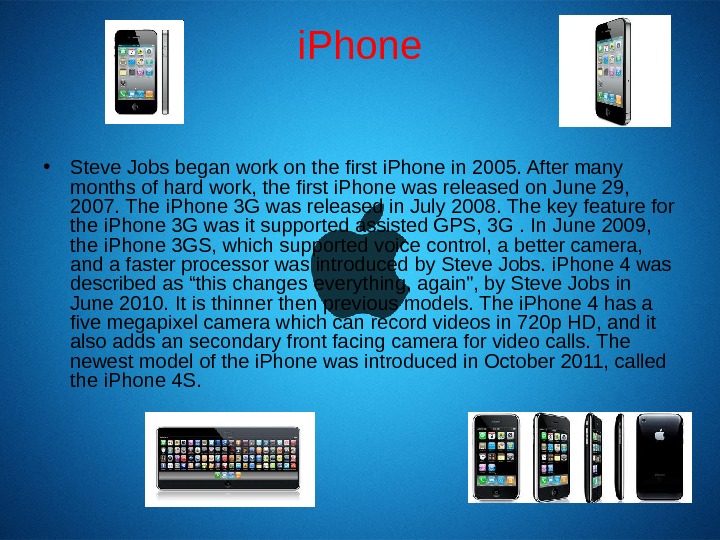 autobiography • He was president of Apple Inc. • He was an American businessman, designer and inventor. • He became a member of the board of directors of The Walt Disney Company in

autobiography • Steven Paul Jobs was born in San-Francisco on February 24, 1955 to two university students. The Jobs family moved from San Francisco to Mountain View, California when Steve was five years old. The parents later adopted a daughter, Patti. Paul’s father was a machinist for a company that made lasers, and taught his son rudimentary electronics. The father showed Steve how to work on electronics in the family garage. Jobs was an intelligent and innovative thinker. At Monta Loma Elementary school in Mountain View, he was a prankster whose fourth-grade teacher needed to bribe him to study. Jobs tested so well, however, that administrators wanted to skip him ahead to high school—a proposal his parents declined. Jobs then attended Cupertino Junior High and Homestead High School in Cupertino, California. Following high school graduation in 1972, Jobs enrolled at Reed College in Portland, Oregon.

A PP L E • Jobs and Steve Wozniak met in 1971, when their mutual friend, Bill Fernandez, introduced 21 -year-old Wozniak to 16 -year-old Jobs. In 1976, Wozniak invented the Apple I computer. Jobs, Wozniak, and Ronald Wayne founded Apple computer in the garage of Jobs’s parents in order to sell it. In 1978, Apple recruited Mike Scott. In 1983, Jobs lured John Sculley away from Pepsi-Cola to serve as Apple’s CEO, asking, «Do you want to sell sugar water for the rest of your life, or do you want to come with me and change the world? • Paul was fired from Apple in 2005. • After leaving Apple, Jobs founded Ne. XT Computer in 1985. • In 1996, Ne. XT Software, Inc. released Web. Objects, a framework for Web application development. After Ne. XT was acquired by Apple Inc. in 1997, Web. Objects was used to build and run the Apple Store, Mobile. Me services, and the i. Tunes Store. • In 1996, Apple announced that it would buy Ne. XT for $427 million. The deal was finalized in late 1996.

Apple Computer • Apple Computer I • The first significant invention of Steve Jobs was the Apple I which came along in 1976. Steve Jobs and Steve Wozniak, who was at the time working for HP, scraped together some cash for printed circuit boards. Then they planned to sell the machine as a kit for $666. A store called the Byte Shop ordered 50 fully assembled devices, and sold them all. The Apple’s first computer was for hobbyists and engineers so it was made in small numbers. • Apple II computer • During 1976, Steve Wozniak begins work on the Apple II, and then he left HP to join Apple computer. In March 1977, Apple Computer moves from Jobs’ garage to an office in Cupertino. Apple Computer delivers its first Apple II system, for US$1295 in April 1977. Steve Jobs once said the Apple II could be described as an «appliance» computer. The Apple II was the first computer to be enclosed in plastic.

i. Mac • Apple i. Mac was introduced in 1998, it symbolized the return of Steve Jobs to the top spot in the company. Apple claimed «the back of our computer looks better than the front of anyone else’s» The first cartoonlike i. Mac, clad in Blue plastic. In 1999, Apple introduced Graphite gray Apple i. Mac. The Apple i. Mac sold for $1, 299 at that time. There was some technical revolutions for i. Mac too. The USB ports being the only device inputs on the i. Mac.

i. Pod • The first generation of i. Pod released in October 23, 2001. The innovations of i. Pod were its small size. The capacity of the first generation i. Pod ranged from 5 G to 10 Gigabytes. The i. Pod sold for US$399 and more than 100, 000 i. Pods were sold before the end of 2001. Apple has taken a big bite out of the music industry. Also, the i. Pod’s success prepared the way for the i. Tunes music store and the i. Phone. After the 1 st gengeration of i. Pod, Apple released the hard drive-based i. Pod classic, the touchscreen i. Pod Touch, video-capable i. Pod Nano in the following years.