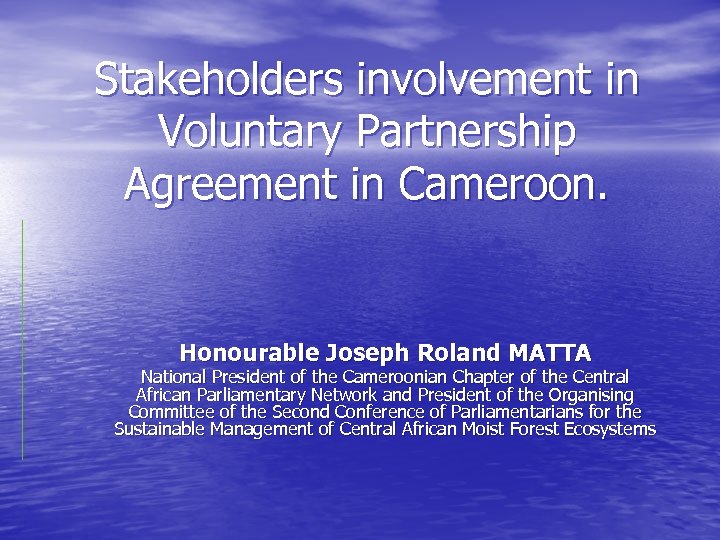 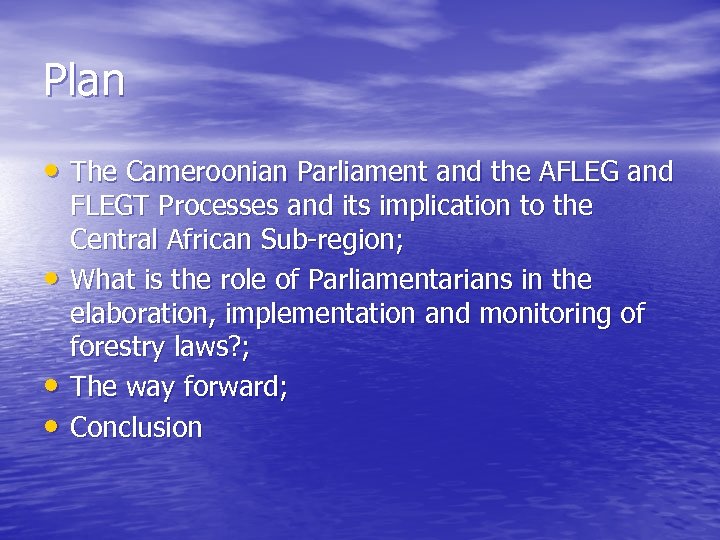 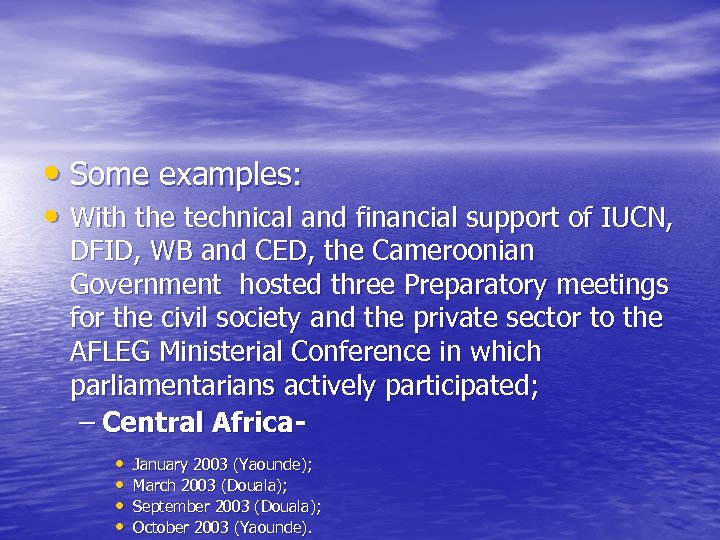 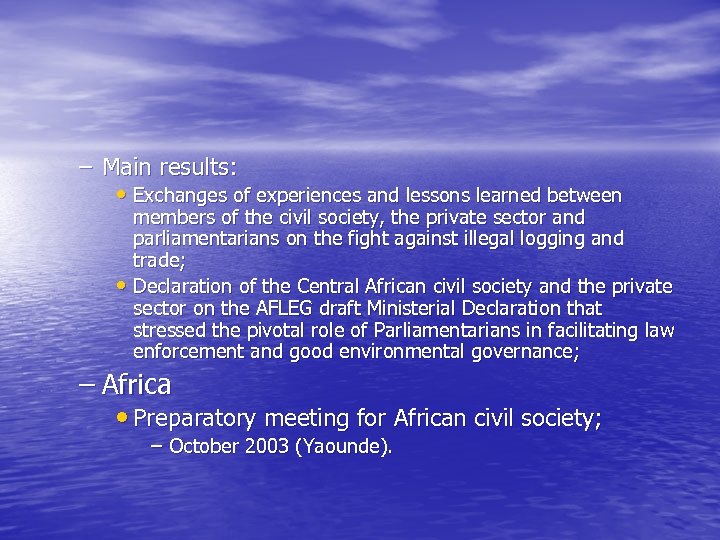 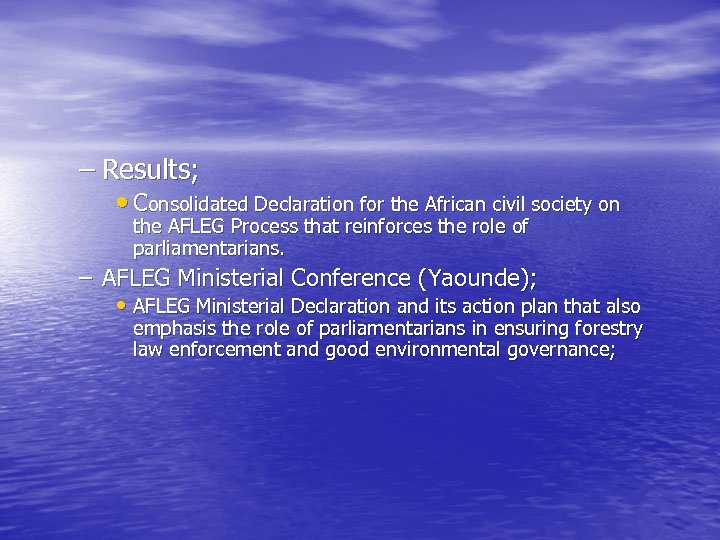 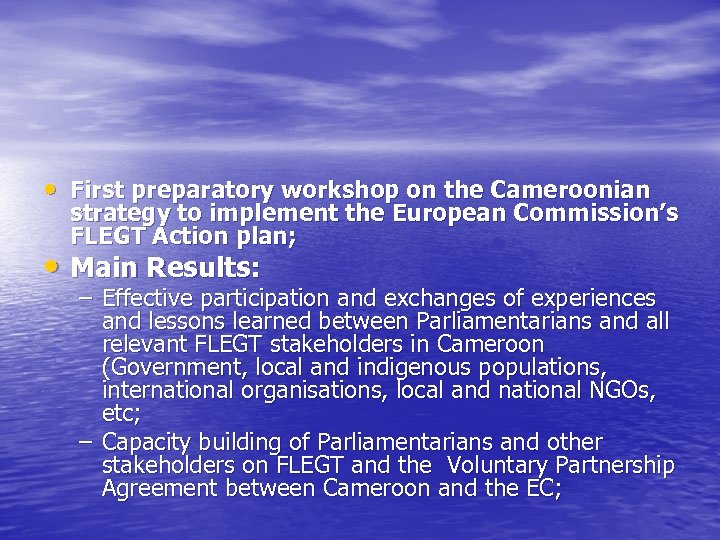 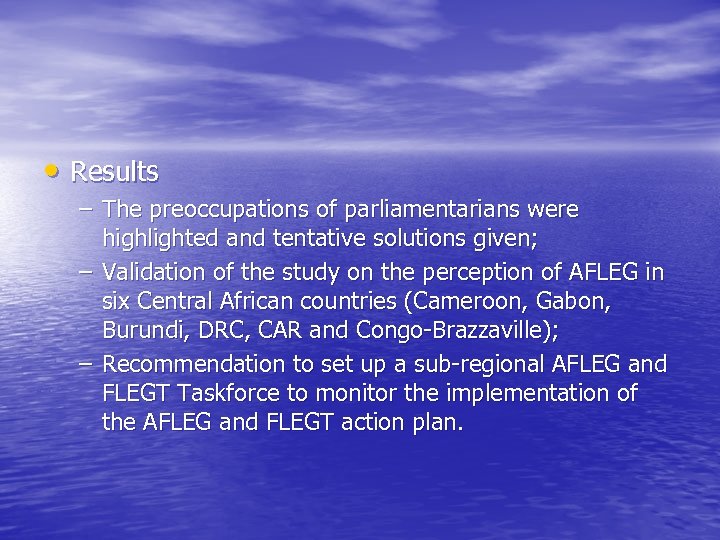 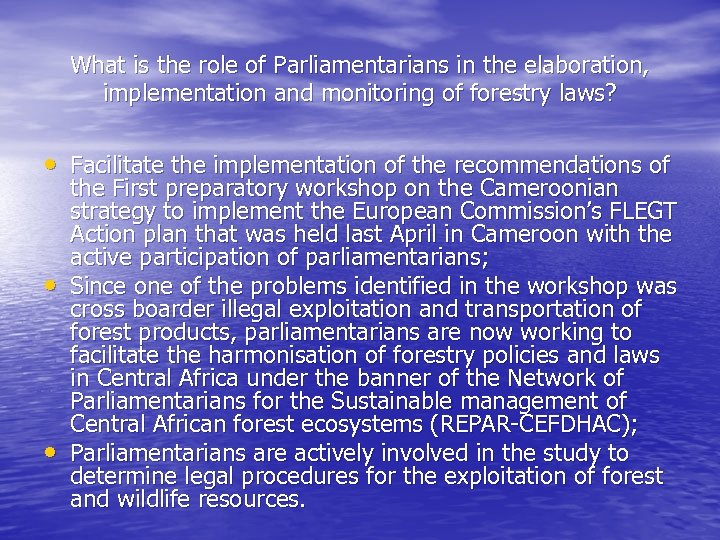 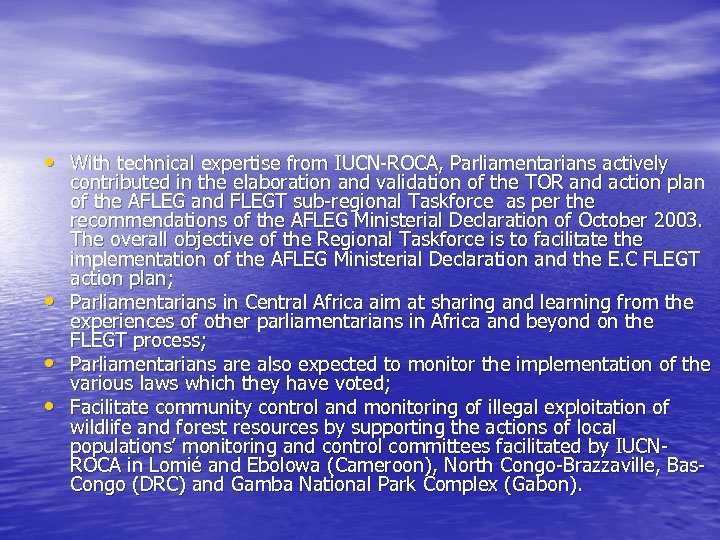 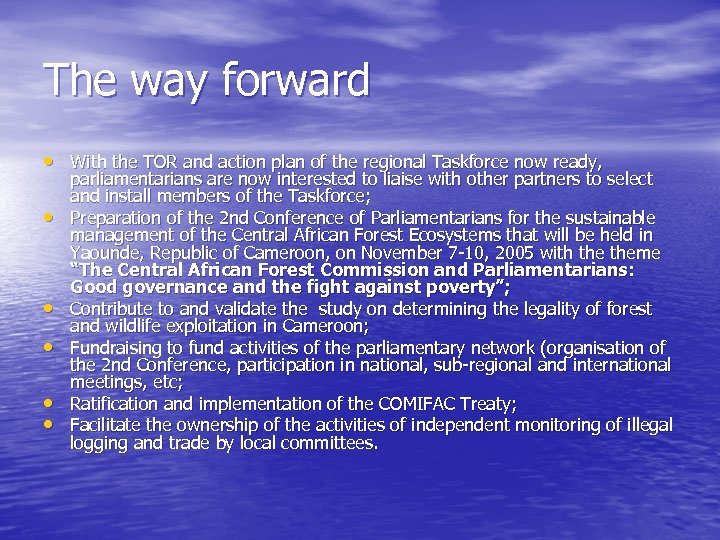 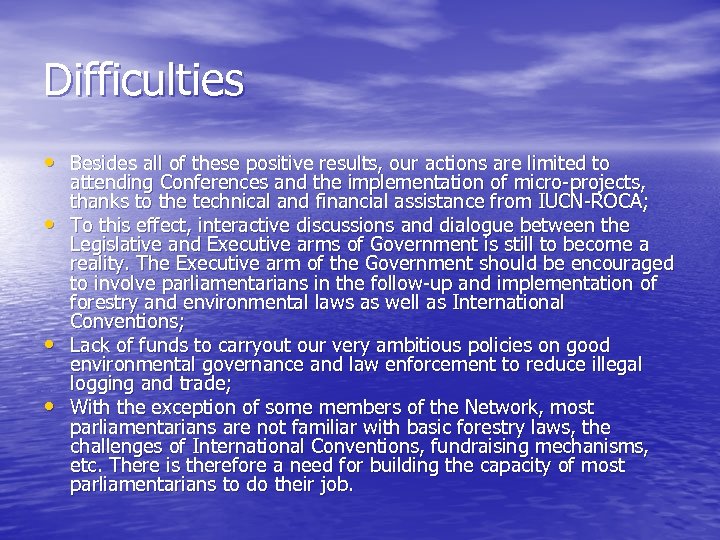 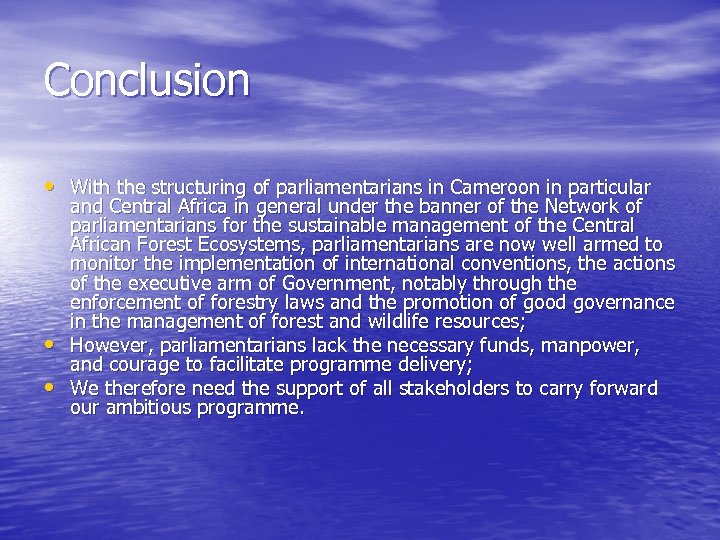 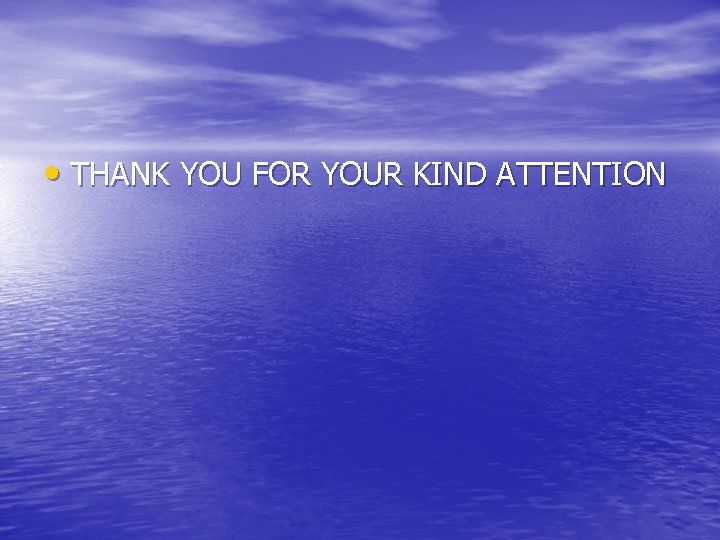 Plan • The Cameroonian Parliament and the AFLEG and • • • FLEGT Processes and its implication to the Central African Sub-region; What is the role of Parliamentarians in the elaboration, implementation and monitoring of forestry laws? ; The way forward; Conclusion

The Cameroonian Parliament and the AFLEG and FLEGT Processes and its implication to the Central African Sub-region • The Cameroonian Parliament has been actively involved in the AFLEG and FLEGT Process for a long time (closely monitoring the Asian FLEGT, AFLEG Pre-ministerial Conference, Preparatory process of the civil society and the private sector, AFLEG Ministerial Conference, etc. ).

• Some examples: • With the technical and financial support of IUCN, DFID, WB and CED, the Cameroonian Government hosted three Preparatory meetings for the civil society and the private sector to the AFLEG Ministerial Conference in which parliamentarians actively participated; – Central Africa • • January 2003 (Yaounde); March 2003 (Douala); September 2003 (Douala); October 2003 (Yaounde).

– Main results: • Exchanges of experiences and lessons learned between members of the civil society, the private sector and parliamentarians on the fight against illegal logging and trade; • Declaration of the Central African civil society and the private sector on the AFLEG draft Ministerial Declaration that stressed the pivotal role of Parliamentarians in facilitating law enforcement and good environmental governance; – Africa • Preparatory meeting for African civil society; – October 2003 (Yaounde).

• First preparatory workshop on the Cameroonian strategy to implement the European Commission’s FLEGT Action plan; • Main Results: – Effective participation and exchanges of experiences and lessons learned between Parliamentarians and all relevant FLEGT stakeholders in Cameroon (Government, local and indigenous populations, international organisations, local and national NGOs, etc; – Capacity building of Parliamentarians and other stakeholders on FLEGT and the Voluntary Partnership Agreement between Cameroon and the EC;

– Parliamentarians and other stakeholders had a better appraisal of the ills of illegal logging and trade in Cameroon and the various mitigating factors, including the reinforcement of the role of parliamentarians in checking the actions of the Executive actions on the issue; – IUCN was also encouraged in its mandate of involving the civil society in the VPA. • Active participation of parliamentarians in the Subregional meeting on the follow up of the AFLEG process in Africa last July 13 -14, 2005 (Libreville) organised by IUCN-ROCA, Intercooperation, World Bank, COMIFAC and the Gabonese Government;

• Results – The preoccupations of parliamentarians were highlighted and tentative solutions given; – Validation of the study on the perception of AFLEG in six Central African countries (Cameroon, Gabon, Burundi, DRC, CAR and Congo-Brazzaville); – Recommendation to set up a sub-regional AFLEG and FLEGT Taskforce to monitor the implementation of the AFLEG and FLEGT action plan.

What is the role of Parliamentarians in the elaboration, implementation and monitoring of forestry laws? • Facilitate the implementation of the recommendations of • • the First preparatory workshop on the Cameroonian strategy to implement the European Commission’s FLEGT Action plan that was held last April in Cameroon with the active participation of parliamentarians; Since one of the problems identified in the workshop was cross boarder illegal exploitation and transportation of forest products, parliamentarians are now working to facilitate the harmonisation of forestry policies and laws in Central Africa under the banner of the Network of Parliamentarians for the Sustainable management of Central African forest ecosystems (REPAR-CEFDHAC); Parliamentarians are actively involved in the study to determine legal procedures for the exploitation of forest and wildlife resources.

• With technical expertise from IUCN-ROCA, Parliamentarians actively • • • contributed in the elaboration and validation of the TOR and action plan of the AFLEG and FLEGT sub-regional Taskforce as per the recommendations of the AFLEG Ministerial Declaration of October 2003. The overall objective of the Regional Taskforce is to facilitate the implementation of the AFLEG Ministerial Declaration and the E. C FLEGT action plan; Parliamentarians in Central Africa aim at sharing and learning from the experiences of other parliamentarians in Africa and beyond on the FLEGT process; Parliamentarians are also expected to monitor the implementation of the various laws which they have voted; Facilitate community control and monitoring of illegal exploitation of wildlife and forest resources by supporting the actions of local populations’ monitoring and control committees facilitated by IUCNROCA in Lomié and Ebolowa (Cameroon), North Congo-Brazzaville, Bas. Congo (DRC) and Gamba National Park Complex (Gabon).

The way forward • With the TOR and action plan of the regional Taskforce now ready, • • • parliamentarians are now interested to liaise with other partners to select and install members of the Taskforce; Preparation of the 2 nd Conference of Parliamentarians for the sustainable management of the Central African Forest Ecosystems that will be held in Yaounde, Republic of Cameroon, on November 7 -10, 2005 with theme “The Central African Forest Commission and Parliamentarians: Good governance and the fight against poverty”; Contribute to and validate the study on determining the legality of forest and wildlife exploitation in Cameroon; Fundraising to fund activities of the parliamentary network (organisation of the 2 nd Conference, participation in national, sub-regional and international meetings, etc; Ratification and implementation of the COMIFAC Treaty; Facilitate the ownership of the activities of independent monitoring of illegal logging and trade by local committees.

Difficulties • Besides all of these positive results, our actions are limited to • • • attending Conferences and the implementation of micro-projects, thanks to the technical and financial assistance from IUCN-ROCA; To this effect, interactive discussions and dialogue between the Legislative and Executive arms of Government is still to become a reality. The Executive arm of the Government should be encouraged to involve parliamentarians in the follow-up and implementation of forestry and environmental laws as well as International Conventions; Lack of funds to carryout our very ambitious policies on good environmental governance and law enforcement to reduce illegal logging and trade; With the exception of some members of the Network, most parliamentarians are not familiar with basic forestry laws, the challenges of International Conventions, fundraising mechanisms, etc. There is therefore a need for building the capacity of most parliamentarians to do their job.

Conclusion • With the structuring of parliamentarians in Cameroon in particular • • and Central Africa in general under the banner of the Network of parliamentarians for the sustainable management of the Central African Forest Ecosystems, parliamentarians are now well armed to monitor the implementation of international conventions, the actions of the executive arm of Government, notably through the enforcement of forestry laws and the promotion of good governance in the management of forest and wildlife resources; However, parliamentarians lack the necessary funds, manpower, and courage to facilitate programme delivery; We therefore need the support of all stakeholders to carry forward our ambitious programme.

• THANK YOU FOR YOUR KIND ATTENTION