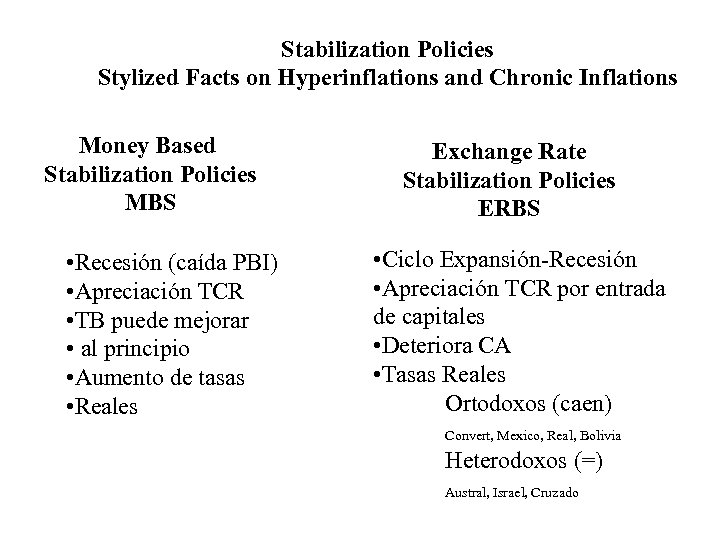 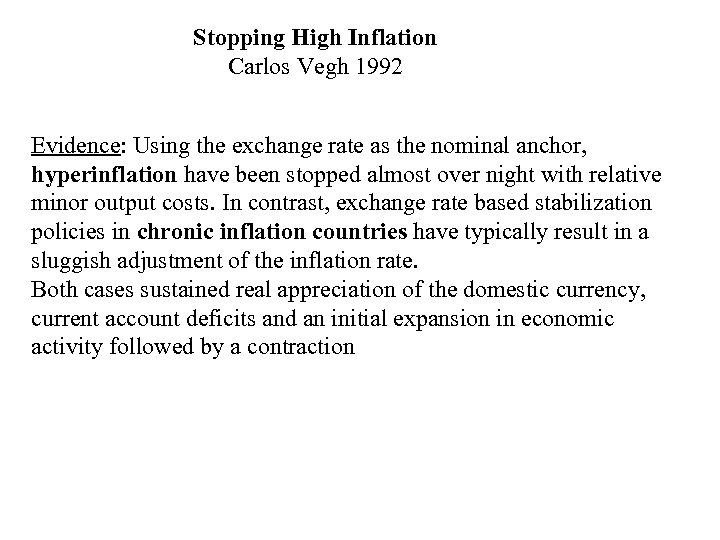 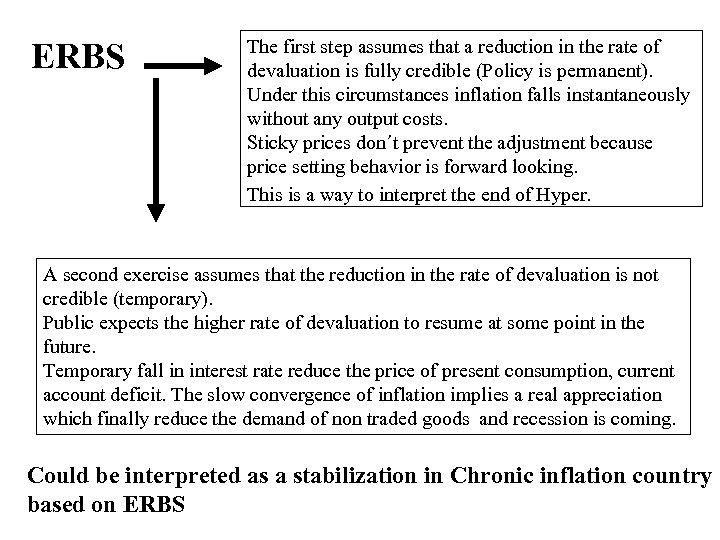 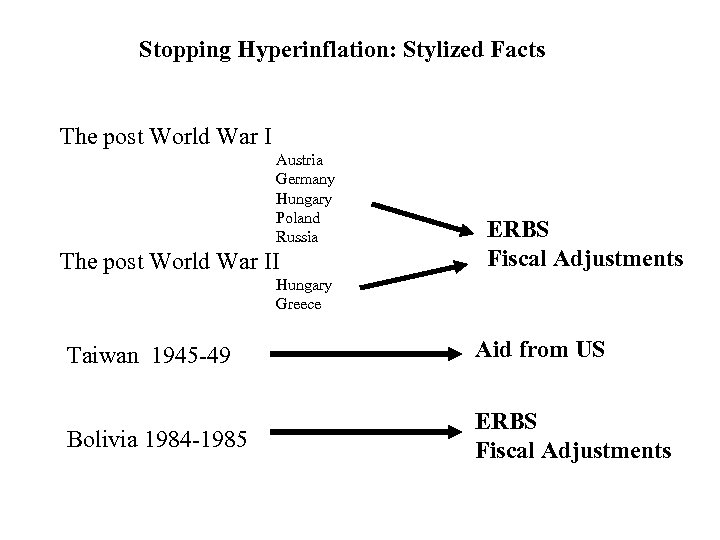 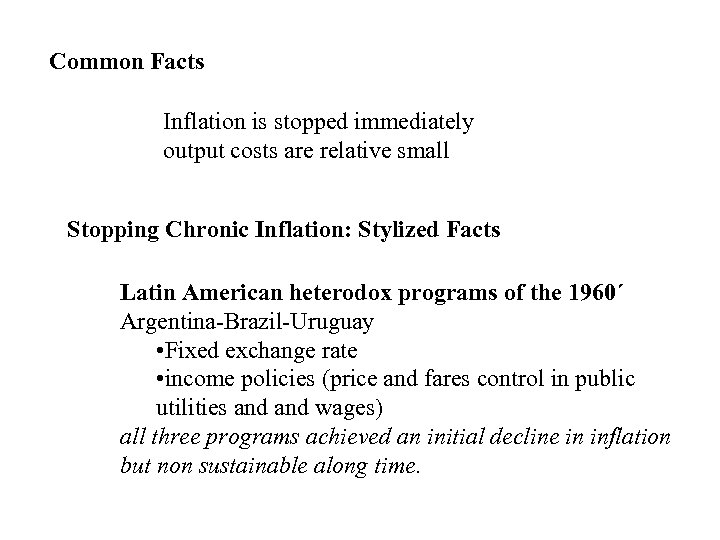 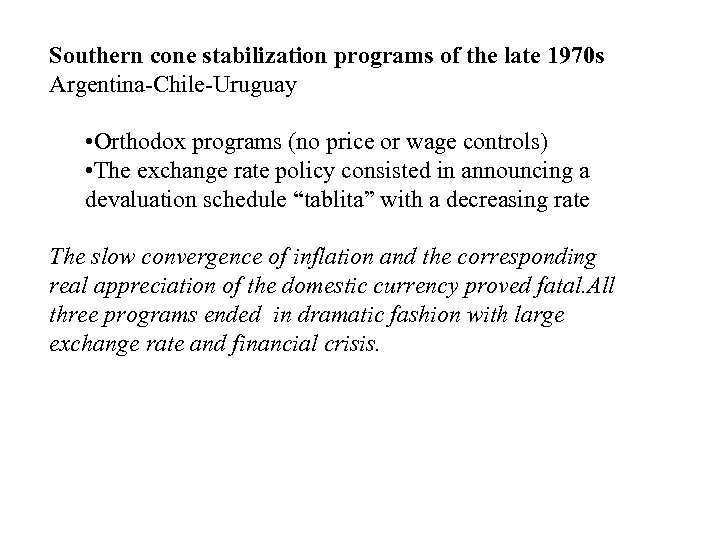 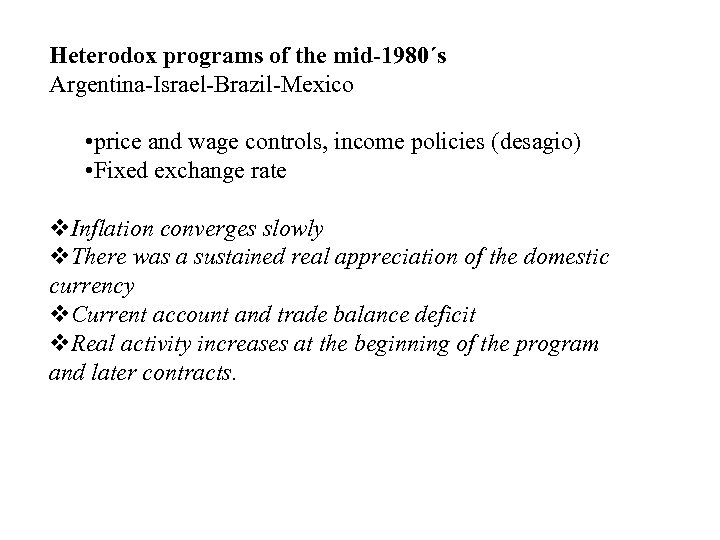 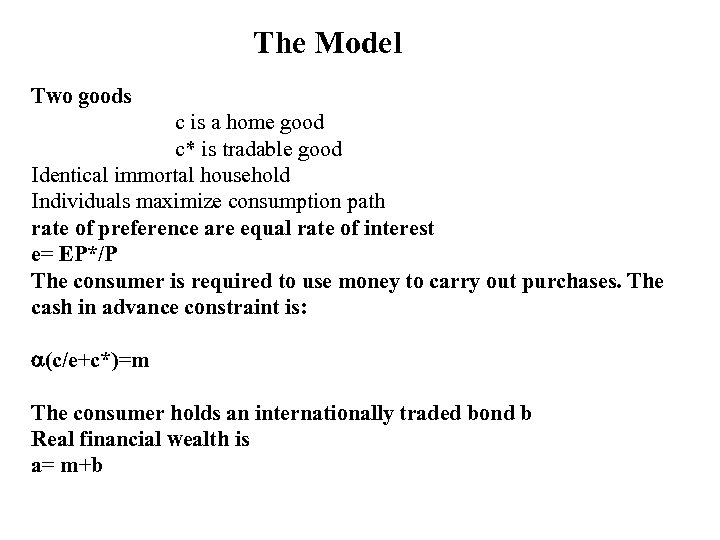 Stopping High Inflation Carlos Vegh 1992 Evidence: Using the exchange rate as the nominal anchor, hyperinflation have been stopped almost over night with relative minor output costs. In contrast, exchange rate based stabilization policies in chronic inflation countries have typically result in a sluggish adjustment of the inflation rate. Both cases sustained real appreciation of the domestic currency, current account deficits and an initial expansion in economic activity followed by a contraction

ERBS The first step assumes that a reduction in the rate of devaluation is fully credible (Policy is permanent). Under this circumstances inflation falls instantaneously without any output costs. Sticky prices don´t prevent the adjustment because price setting behavior is forward looking. This is a way to interpret the end of Hyper. A second exercise assumes that the reduction in the rate of devaluation is not credible (temporary). Public expects the higher rate of devaluation to resume at some point in the future. Temporary fall in interest rate reduce the price of present consumption, current account deficit. The slow convergence of inflation implies a real appreciation which finally reduce the demand of non traded goods and recession is coming. Could be interpreted as a stabilization in Chronic inflation country based on ERBS

Southern cone stabilization programs of the late 1970 s Argentina-Chile-Uruguay • Orthodox programs (no price or wage controls) • The exchange rate policy consisted in announcing a devaluation schedule “tablita” with a decreasing rate The slow convergence of inflation and the corresponding real appreciation of the domestic currency proved fatal. All three programs ended in dramatic fashion with large exchange rate and financial crisis.

The Model Two goods c is a home good c* is tradable good Identical immortal household Individuals maximize consumption path rate of preference are equal rate of interest e= EP*/P The consumer is required to use money to carry out purchases. The cash in advance constraint is: (c/e+c*)=m The consumer holds an internationally traded bond b Real financial wealth is a= m+b