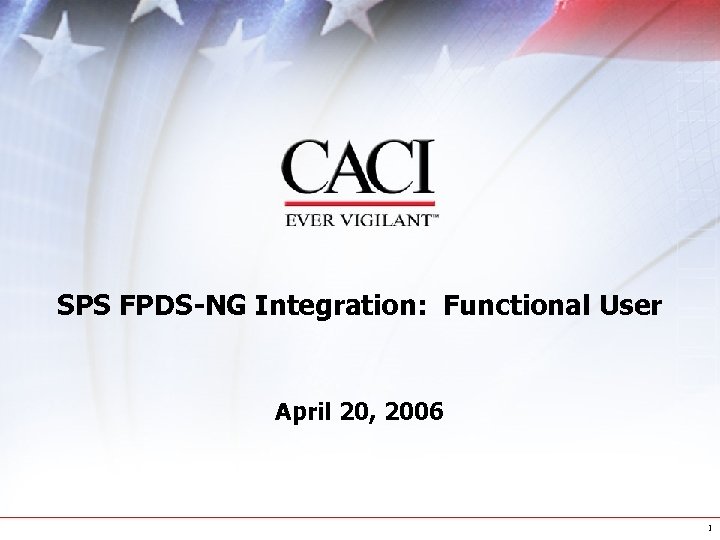 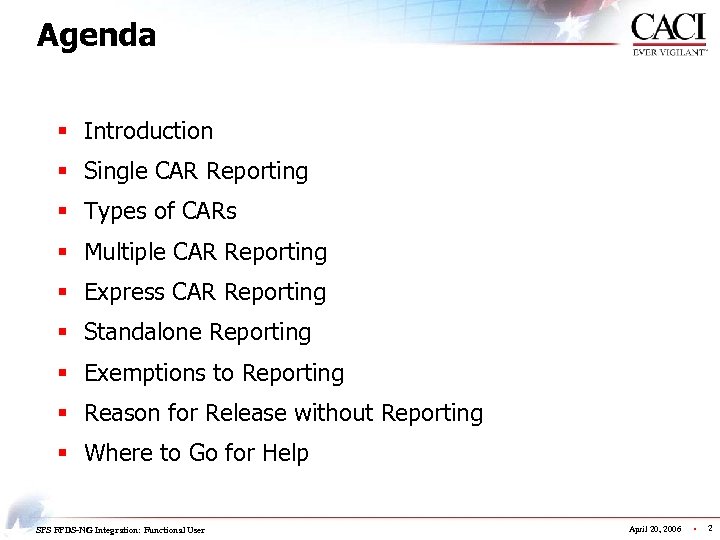 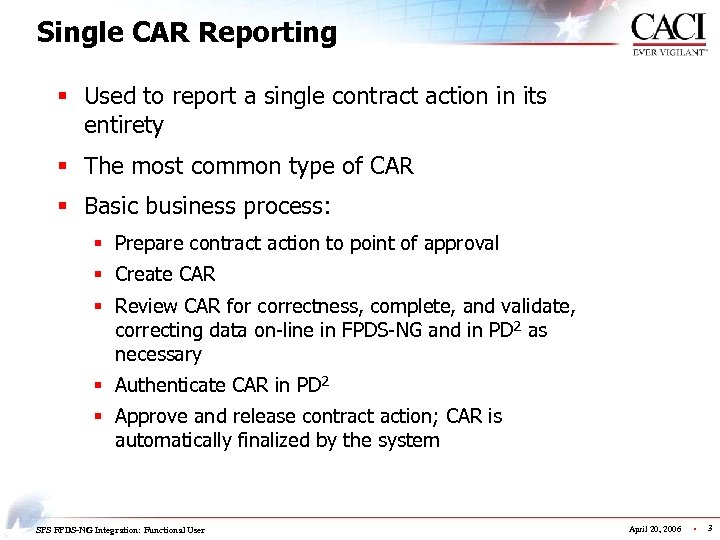 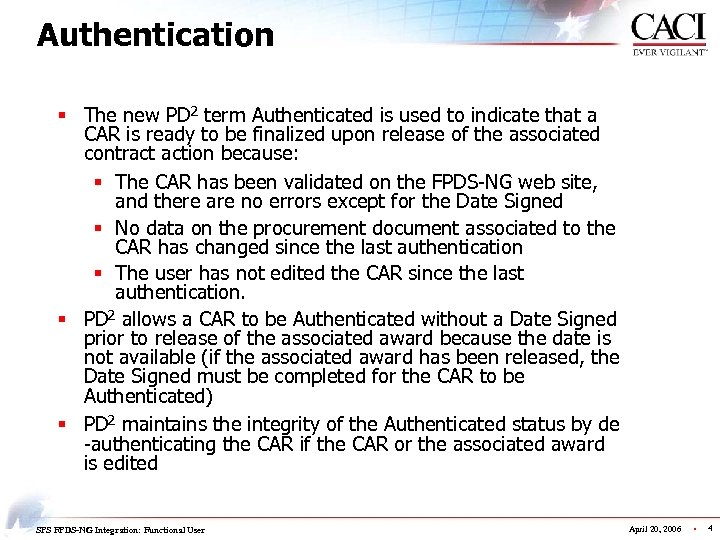 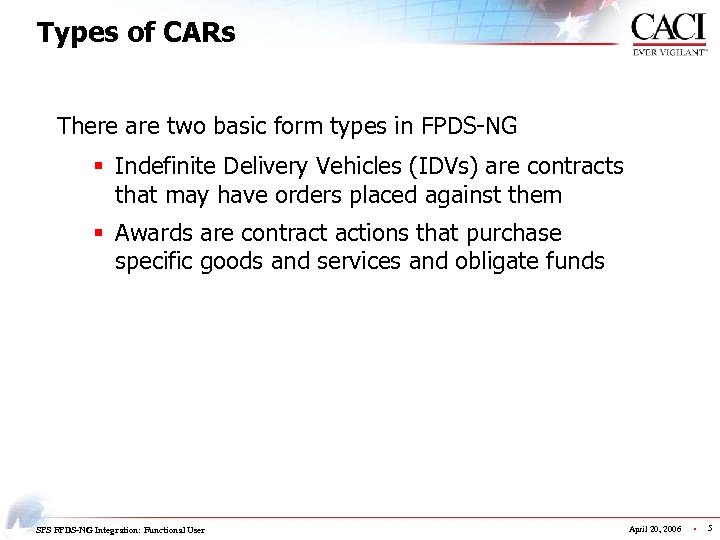 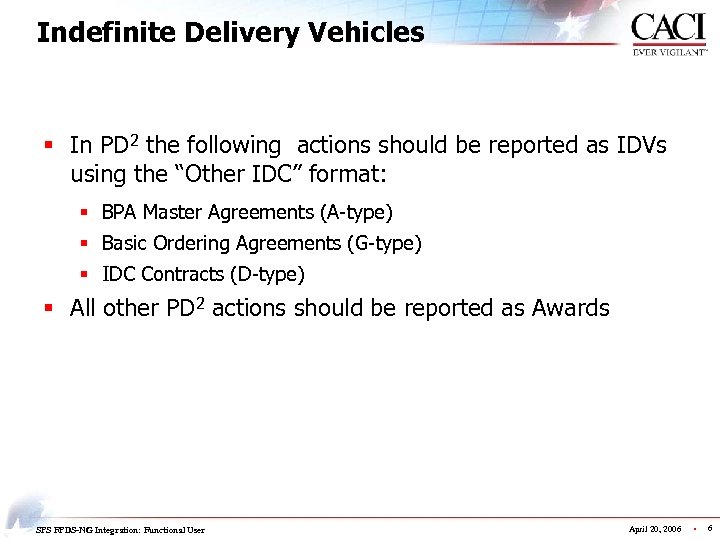 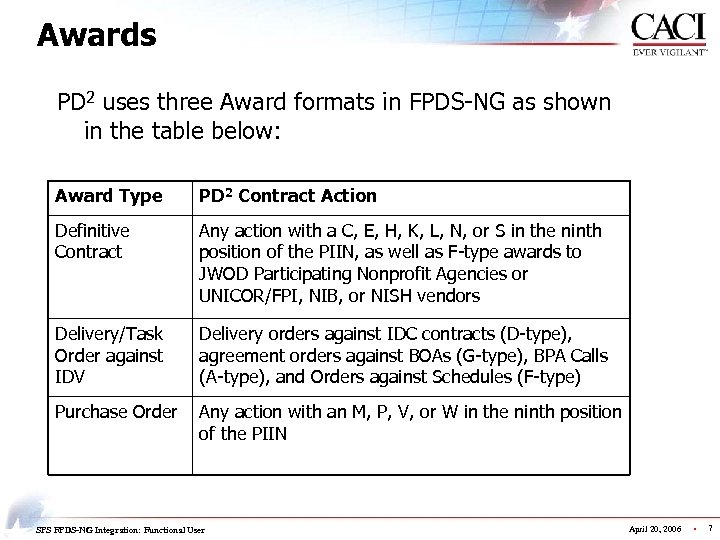 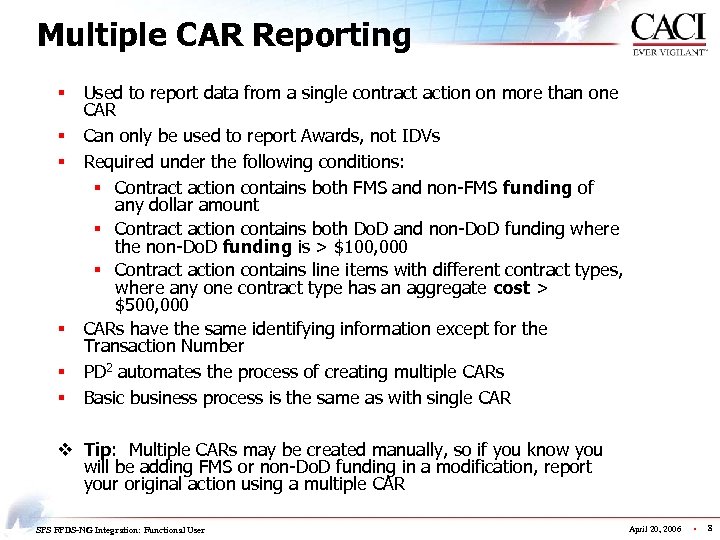 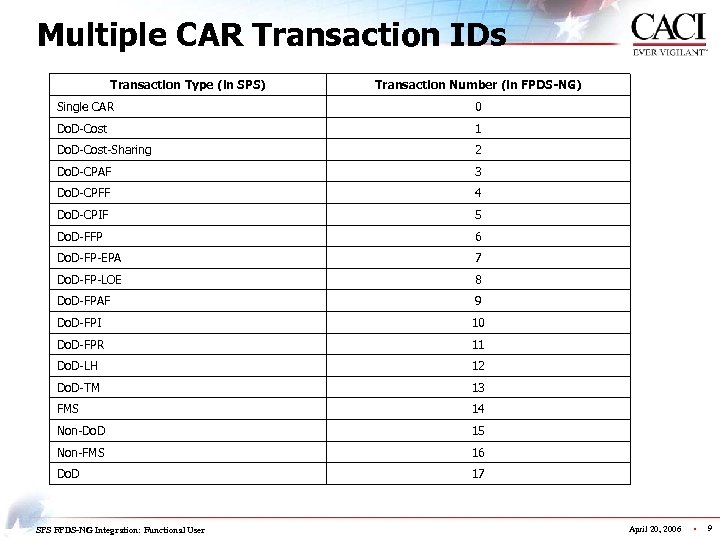 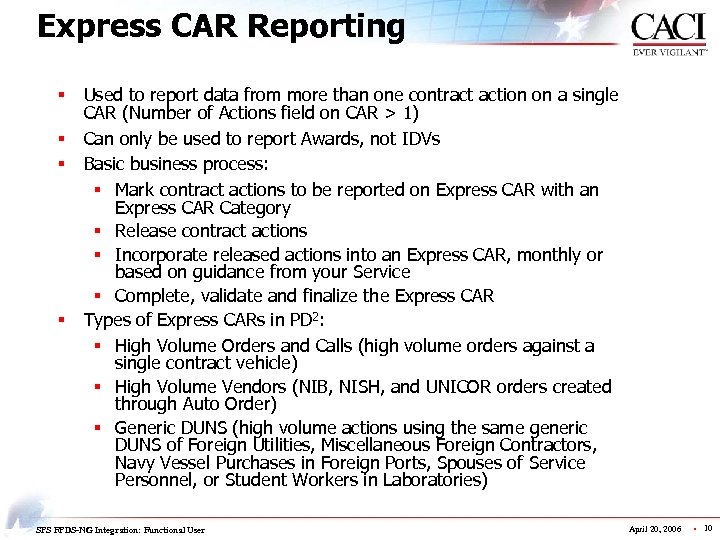 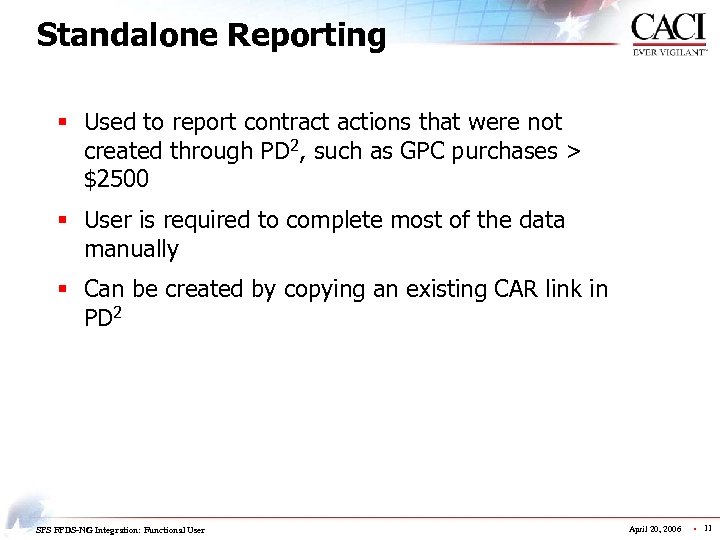 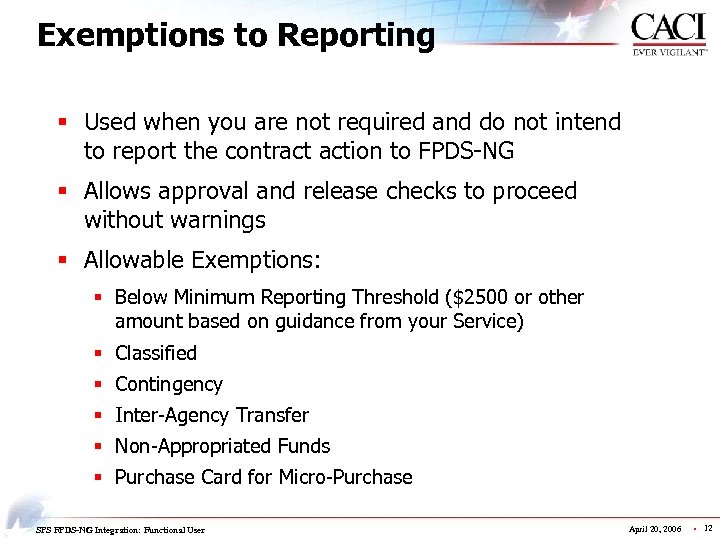 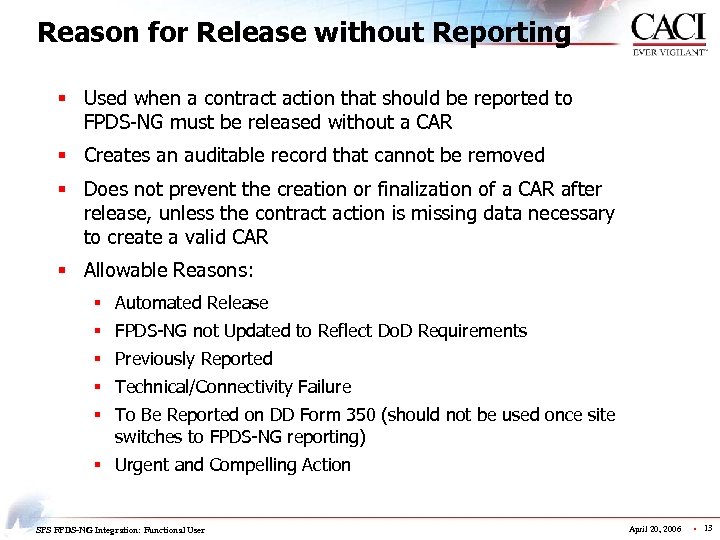 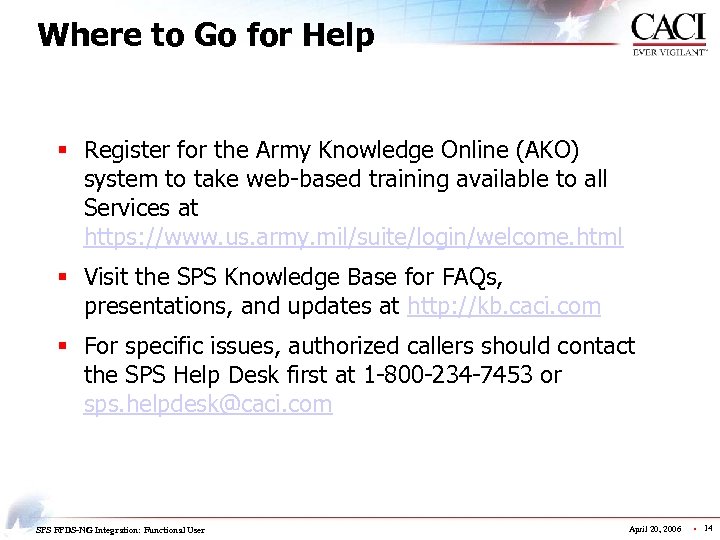 Types of CARs There are two basic form types in FPDS-NG § Indefinite Delivery Vehicles (IDVs) are contracts that may have orders placed against them § Awards are contract actions that purchase specific goods and services and obligate funds SPS FPDS-NG Integration: Functional User April 20, 2006 • 5

Awards PD 2 uses three Award formats in FPDS-NG as shown in the table below: Award Type PD 2 Contract Action Definitive Contract Any action with a C, E, H, K, L, N, or S in the ninth position of the PIIN, as well as F-type awards to JWOD Participating Nonprofit Agencies or UNICOR/FPI, NIB, or NISH vendors Delivery/Task Order against IDV Delivery orders against IDC contracts (D-type), agreement orders against BOAs (G-type), BPA Calls (A-type), and Orders against Schedules (F-type) Purchase Order Any action with an M, P, V, or W in the ninth position of the PIIN SPS FPDS-NG Integration: Functional User April 20, 2006 • 7

Standalone Reporting § Used to report contract actions that were not created through PD 2, such as GPC purchases > $2500 § User is required to complete most of the data manually § Can be created by copying an existing CAR link in PD 2 SPS FPDS-NG Integration: Functional User April 20, 2006 • 11

Exemptions to Reporting § Used when you are not required and do not intend to report the contract action to FPDS-NG § Allows approval and release checks to proceed without warnings § Allowable Exemptions: § Below Minimum Reporting Threshold ($2500 or other amount based on guidance from your Service) § Classified § Contingency § Inter-Agency Transfer § Non-Appropriated Funds § Purchase Card for Micro-Purchase SPS FPDS-NG Integration: Functional User April 20, 2006 • 12

Reason for Release without Reporting § Used when a contract action that should be reported to FPDS-NG must be released without a CAR § Creates an auditable record that cannot be removed § Does not prevent the creation or finalization of a CAR after release, unless the contract action is missing data necessary to create a valid CAR § Allowable Reasons: § Automated Release § FPDS-NG not Updated to Reflect Do. D Requirements § Previously Reported § Technical/Connectivity Failure § To Be Reported on DD Form 350 (should not be used once site switches to FPDS-NG reporting) § Urgent and Compelling Action SPS FPDS-NG Integration: Functional User April 20, 2006 • 13