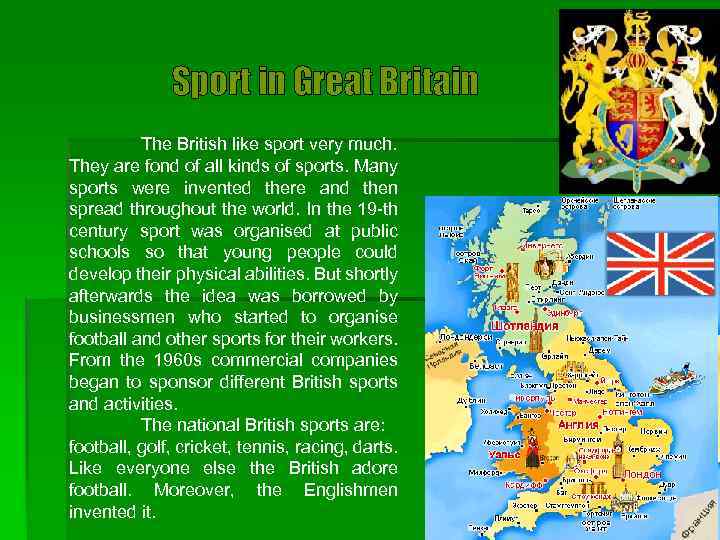 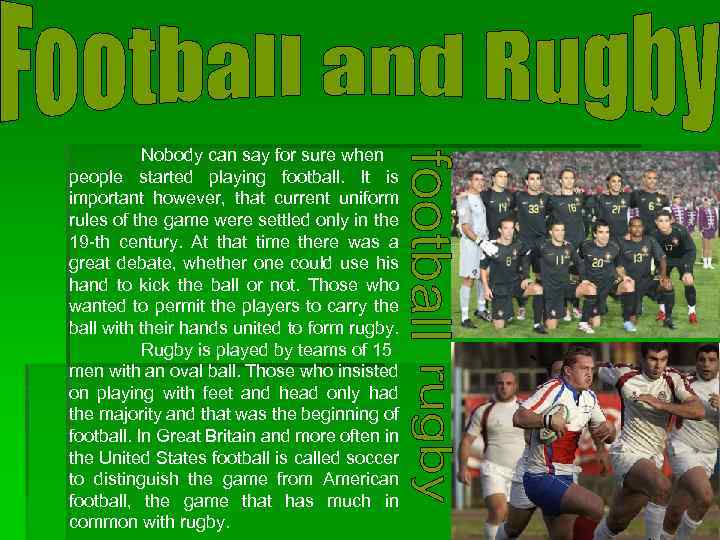 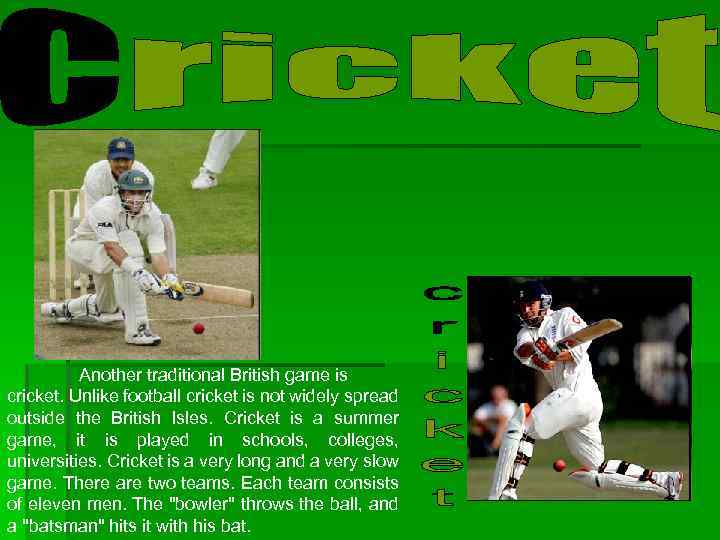 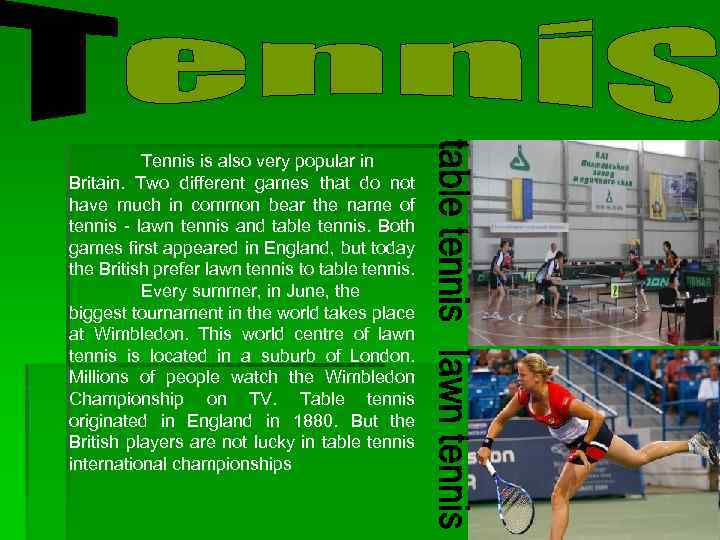 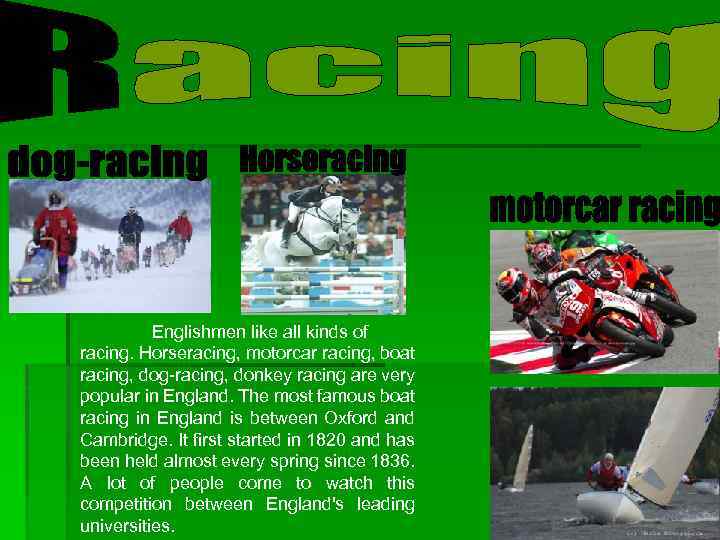 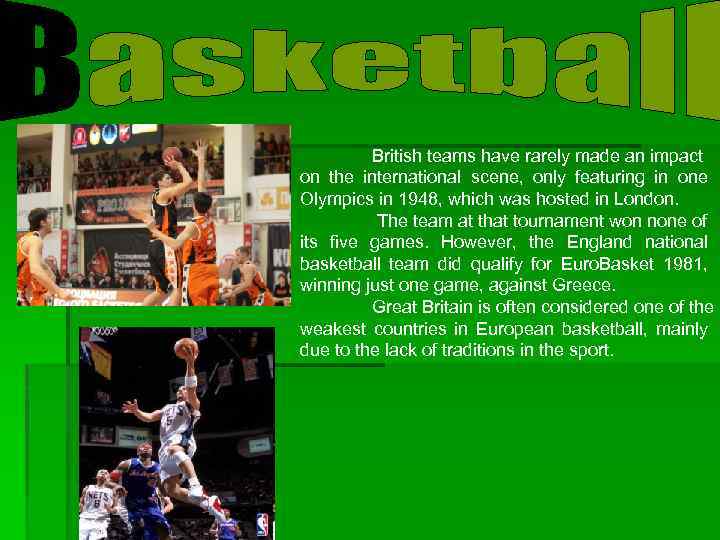 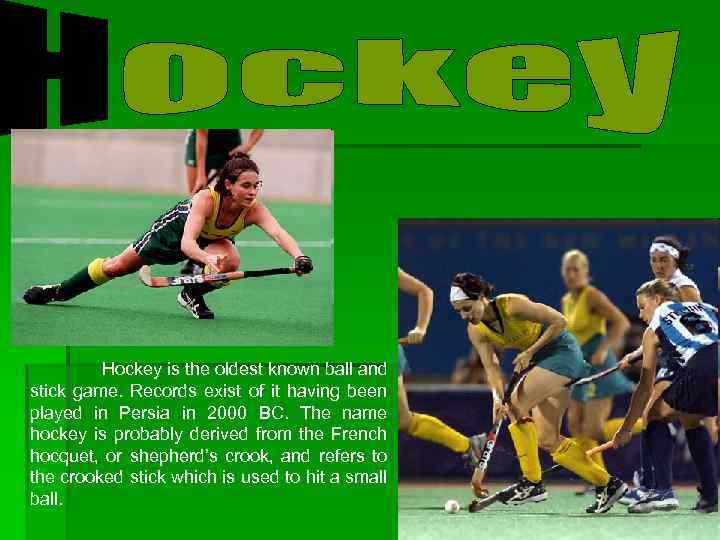 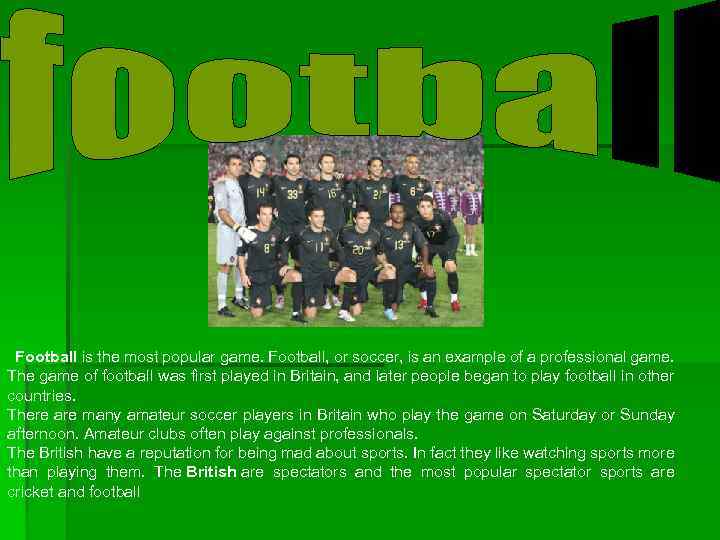 Скачать презентацию Sport in Great Britain The British like sport

Sport in Great Britain The British like sport very much. They are fond of all kinds of sports. Many sports were invented there and then spread throughout the world. In the 19 -th century sport was organised at public schools so that young people could develop their physical abilities. But shortly afterwards the idea was borrowed by businessmen who started to organise football and other sports for their workers. From the 1960 s commercial companies began to sponsor different British sports and activities. The national British sports are: football, golf, cricket, tennis, racing, darts. Like everyone else the British adore football. Moreover, the Englishmen invented it.

Nobody can say for sure when people started playing football. It is important however, that current uniform rules of the game were settled only in the 19 -th century. At that time there was a great debate, whether one could use his hand to kick the ball or not. Those who wanted to permit the players to carry the ball with their hands united to form rugby. Rugby is played by teams of 15 men with an oval ball. Those who insisted on playing with feet and head only had the majority and that was the beginning of football. In Great Britain and more often in the United States football is called soccer to distinguish the game from American football, the game that has much in common with rugby.

Another traditional British game is cricket. Unlike football cricket is not widely spread outside the British Isles. Cricket is a summer game, it is played in schools, colleges, universities. Cricket is a very long and a very slow game. There are two teams. Each team consists of eleven men. The "bowler" throws the ball, and a "batsman" hits it with his bat.

Tennis is also very popular in Britain. Two different games that do not have much in common bear the name of tennis - lawn tennis and table tennis. Both games first appeared in England, but today the British prefer lawn tennis to table tennis. Every summer, in June, the biggest tournament in the world takes place at Wimbledon. This world centre of lawn tennis is located in a suburb of London. Millions of people watch the Wimbledon Championship on TV. Table tennis originated in England in 1880. But the British players are not lucky in table tennis international championships

Englishmen like all kinds of racing. Horseracing, motorcar racing, boat racing, dog-racing, donkey racing are very popular in England. The most famous boat racing in England is between Oxford and Cambridge. It first started in 1820 and has been held almost every spring since 1836. A lot of people come to watch this competition between England's leading universities.

British teams have rarely made an impact on the international scene, only featuring in one Olympics in 1948, which was hosted in London. The team at that tournament won none of its five games. However, the England national basketball team did qualify for Euro. Basket 1981, winning just one game, against Greece. Great Britain is often considered one of the weakest countries in European basketball, mainly due to the lack of traditions in the sport.

Hockey is the oldest known ball and stick game. Records exist of it having been played in Persia in 2000 BC. The name hockey is probably derived from the French hocquet, or shepherd’s crook, and refers to the crooked stick which is used to hit a small ball.

Football is the most popular game. Football, or soccer, is an example of a professional game. The game of football was first played in Britain, and later people began to play football in other countries. There are many amateur soccer players in Britain who play the game on Saturday or Sunday afternoon. Amateur clubs often play against professionals. The British have a reputation for being mad about sports. In fact they like watching sports more than playing them. The British are spectators and the most popular spectator sports are cricket and football