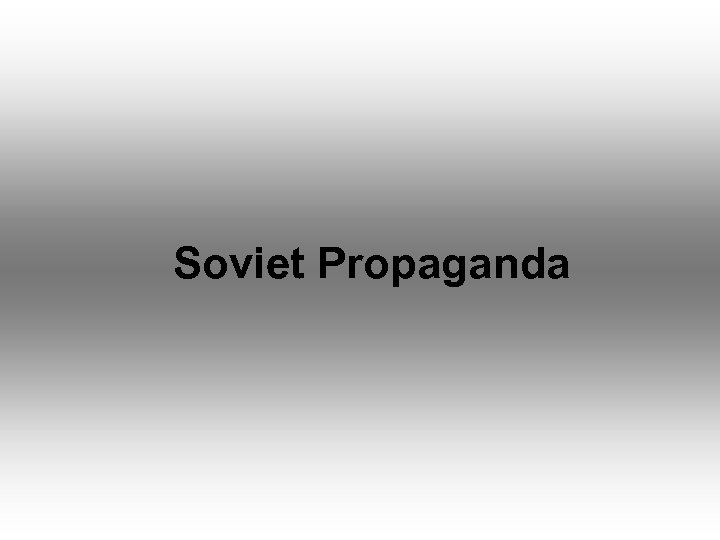 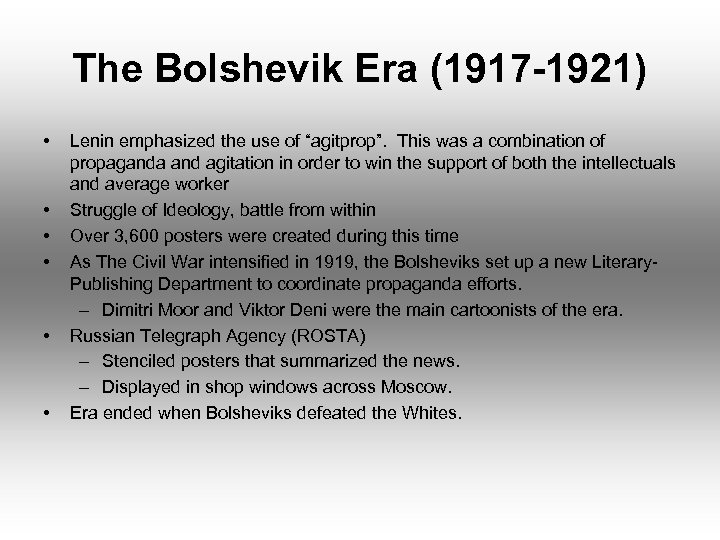 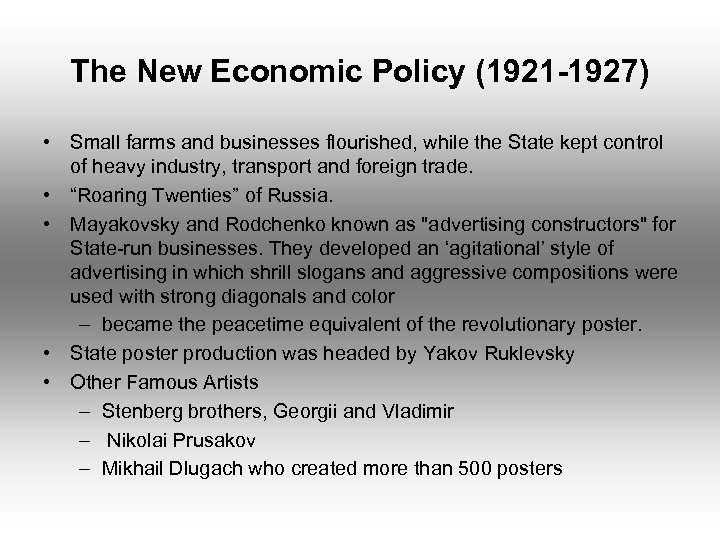 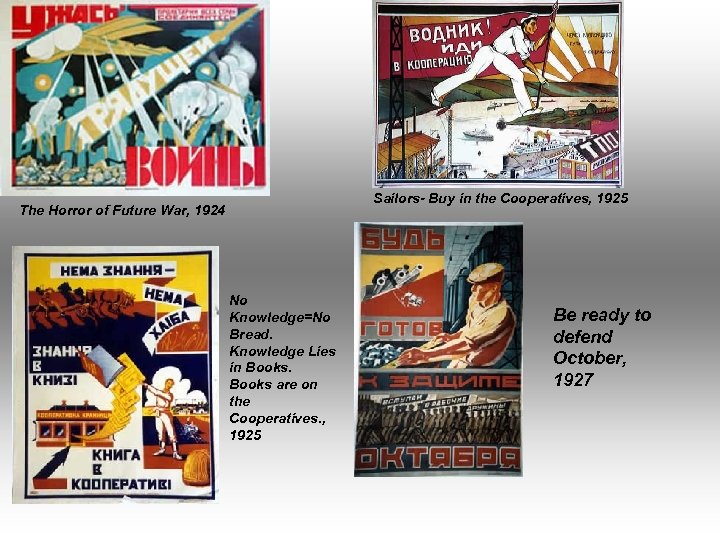 The Bolshevik Era (1917 -1921) • • • Lenin emphasized the use of “agitprop”. This was a combination of propaganda and agitation in order to win the support of both the intellectuals and average worker Struggle of Ideology, battle from within Over 3, 600 posters were created during this time As The Civil War intensified in 1919, the Bolsheviks set up a new Literary. Publishing Department to coordinate propaganda efforts. – Dimitri Moor and Viktor Deni were the main cartoonists of the era. Russian Telegraph Agency (ROSTA) – Stenciled posters that summarized the news. – Displayed in shop windows across Moscow. Era ended when Bolsheviks defeated the Whites.

Never buy in a Private Shop when you can buy in a Cossack - Who are you with, them or us? , 1920 cooperative, Universal War Training Education is the Key to Victory. The worker's hand is powerful with a rifle a, c. 1919 Rosta Window #216 (No Bureaucracy) 8 panels, 1921 Only the Red Army can bring peace to your farms and villages. Peasants, join your workers' and peasants’, 1920

The New Economic Policy (1921 -1927) • Small farms and businesses flourished, while the State kept control of heavy industry, transport and foreign trade. • “Roaring Twenties” of Russia. • Mayakovsky and Rodchenko known as "advertising constructors" for State-run businesses. They developed an ‘agitational’ style of advertising in which shrill slogans and aggressive compositions were used with strong diagonals and color – became the peacetime equivalent of the revolutionary poster. • State poster production was headed by Yakov Ruklevsky • Other Famous Artists – Stenberg brothers, Georgii and Vladimir – Nikolai Prusakov – Mikhail Dlugach who created more than 500 posters

The First and Second Five Year Plans (1928 -1937) • First Five Year plan – – Upon assuming complete control in 1928, Stalin immediately put an end to the New Economic Policy and embarked on a new course to full communism with the Five Year Plan. Intended to turn the USSR rapidly into a powerful industrial nation. Stalin demanded an increase in production and wide scale construction Created strictly controlled propaganda Posters appeared everywhere, in factories, farms and all public spaces, in vast quantities and variety Messages of Propaganda: ": fulfill the plan, exceed quotas, defend the USSR” • Master of this message was Gustav Klutsis • Used mostly red and black All designed to stress the monumental and heroic aspect of the age. • His propaganda attacked the enemies of the State both within and without, always portraying the Soviet Union as the victor of peace and social justice • Second Five Year Plan – – Beginning in 1934, Stalin embarked on a thorough purge of the Party, then the army. Anyone remotely suspected of opposition or even lack of enthusiasm was exiled to the camps or shot Purges claimed the lives of many artists even Gustav Klutsis Literature, art and posters of this period overwhelmingly stressed the role of the infallible Leader, Joseph Stalin. Terror, drove out originality and spontaneity in not only propaganda, but in art until the death of Stalin in 1953

Greeting to those who have joined the work at the worldwide giant Dneprostroi DGES (Dnieper Hydroelectirc Dam), 1932 A Country should know its Heroes, c. 1930 The Komsomol Fleet greets the great Stalin!, 1939 Marx, Engels, Lenin and Stalin, 1936

The Great Patriotic War (1939 1945) • The forces unleashed in the crisis of the Civil War were rekindled, and Soviet artists rose to the challenge. • The themes of Soviet propaganda shifted dramatically as the threat of the Nazis grew. Patriotic themes began to overshadow communism and class struggle. • Speeches and posters were populated by references to great pre-Soviet heroes. • Two most famous phrases, both by Moor. – “How have you helped the Front” – “Have you enrolled as a volunteer”.

The Cold War (1946 - 1984) • Return of “Social Realism” and other Utopian Views • Up until his death in 1953, posters focused on the glory of Stalin • The middle years of the Cold War depicted the Vietnam War and the great strides taken in the Space Race • Denounced the aims and goals of Capitalism, viewed as the main threat of communism • Denounced religion as a threat to the communist ideals – 12, 000 churches closed by Krushchev in 1959

Under Lenin's banner, with Stalin's leadership - ahead toward Communism, 1948 Religious rites - Young and old, Tear these strings!, c. 1966 The Republic of the Free The Hammer & Sickle forever forge the shield, 1966 Pledge to the Motherland Communist Ideas, 1978 Stop U. S. Agression in Vietnam, 1974