Some aspects of recent practice of the Supreme 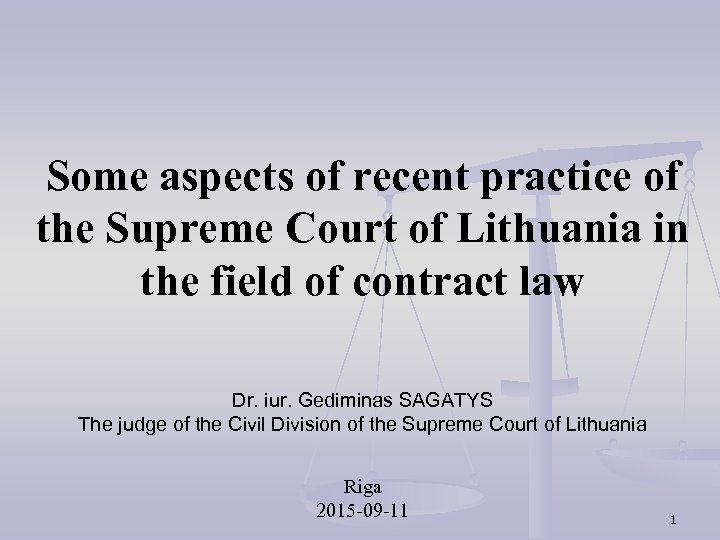 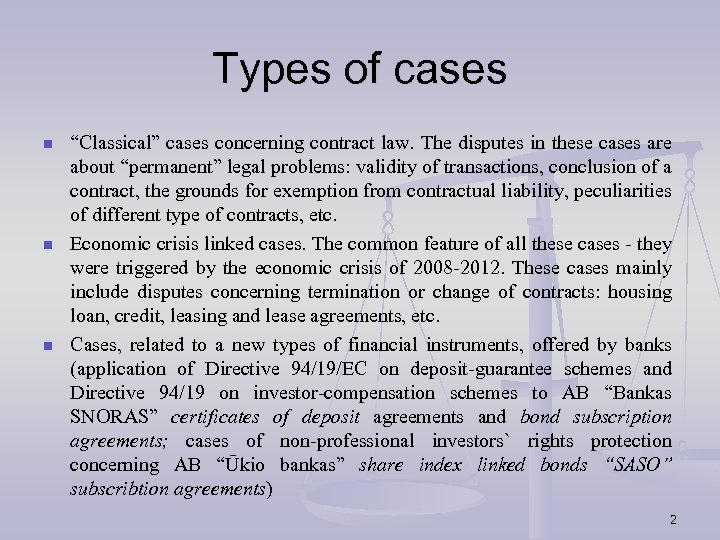 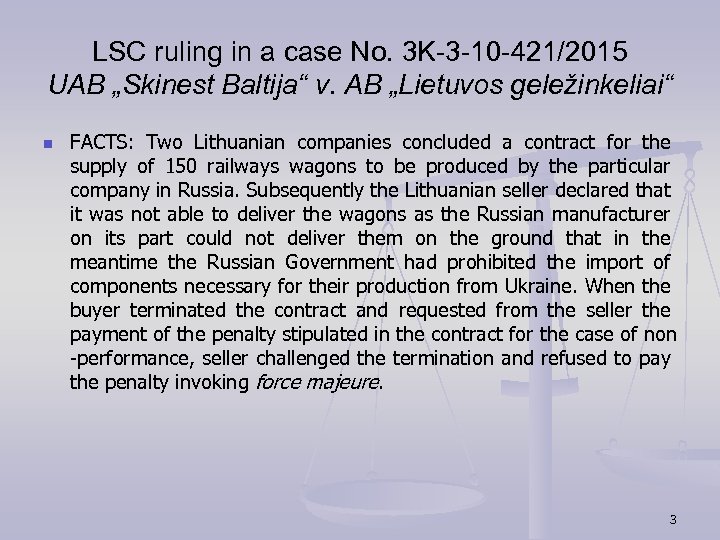 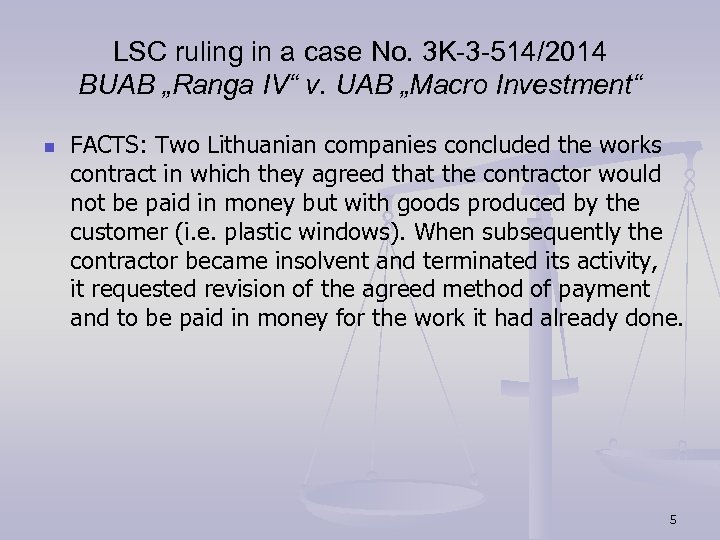 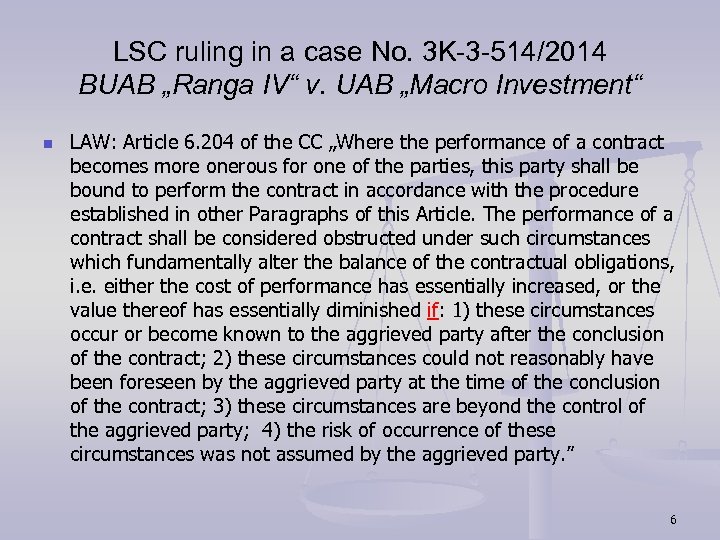 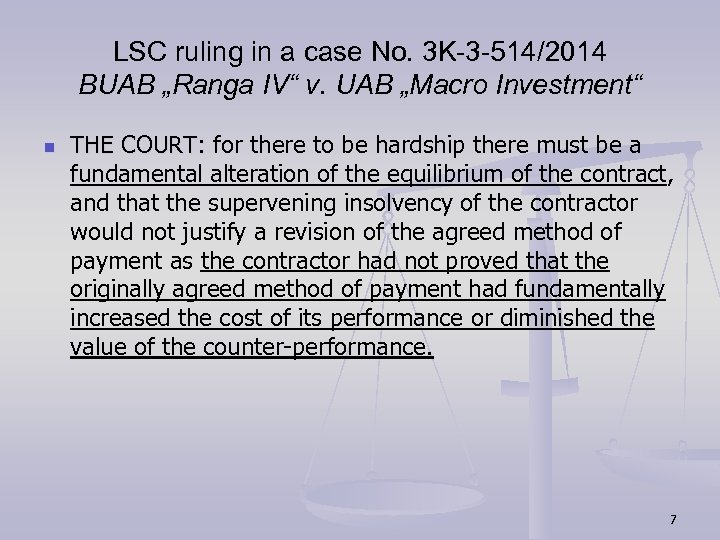 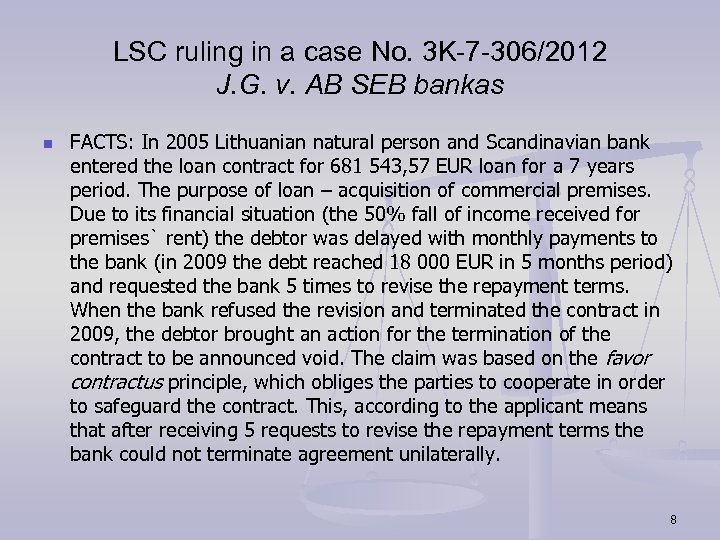 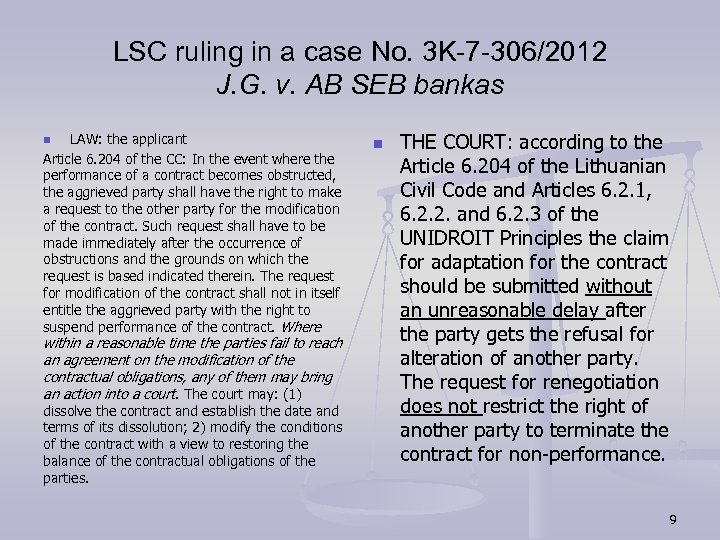 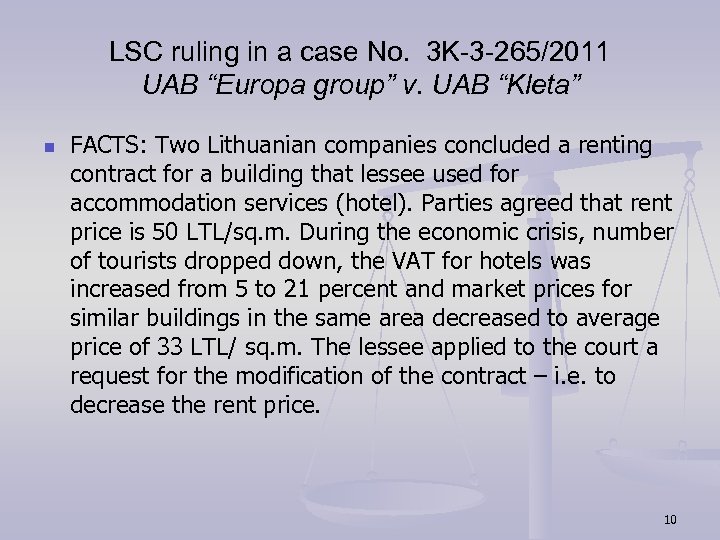 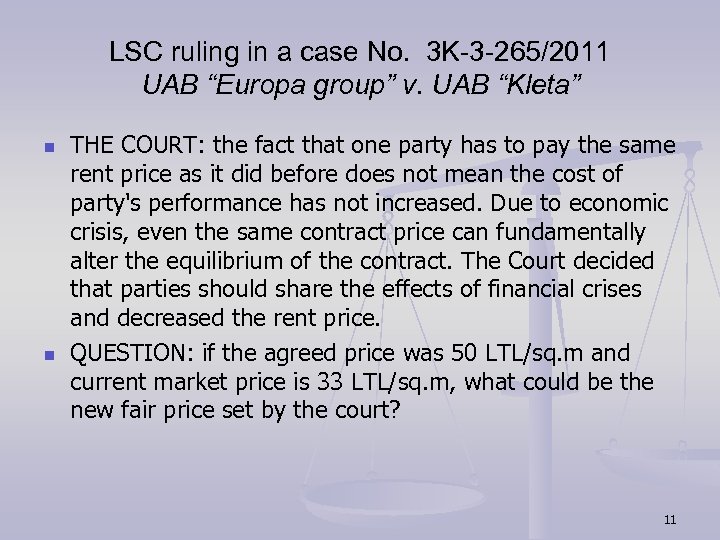 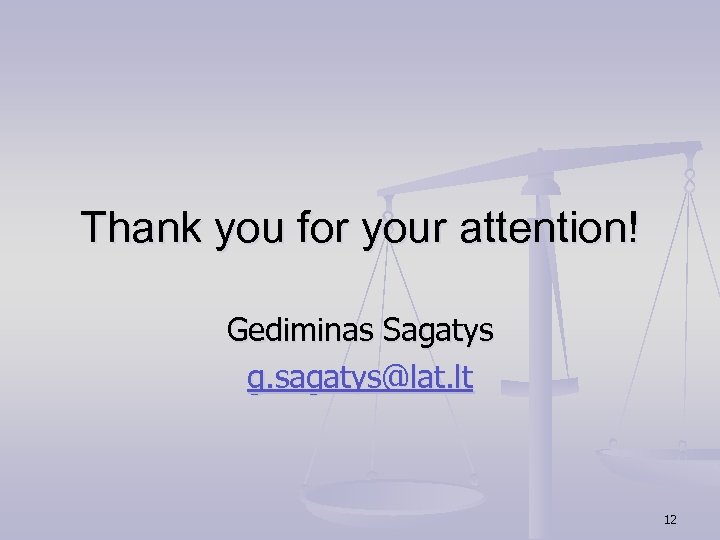 Скачать презентацию Some aspects of recent practice of the Supreme

Types of cases n n n “Classical” cases concerning contract law. The disputes in these cases are about “permanent” legal problems: validity of transactions, conclusion of a contract, the grounds for exemption from contractual liability, peculiarities of different type of contracts, etc. Economic crisis linked cases. The common feature of all these cases - they were triggered by the economic crisis of 2008 -2012. These cases mainly include disputes concerning termination or change of contracts: housing loan, credit, leasing and lease agreements, etc. Cases, related to a new types of financial instruments, offered by banks (application of Directive 94/19/EC on deposit-guarantee schemes and Directive 94/19 on investor-compensation schemes to AB “Bankas SNORAS” certificates of deposit agreements and bond subscription agreements; cases of non-professional investors` rights protection concerning AB “Ūkio bankas” share index linked bonds “SASO” subscribtion agreements) 2

LSC ruling in a case No. 3 K-3 -10 -421/2015 UAB „Skinest Baltija“ v. AB „Lietuvos geležinkeliai“ n FACTS: Two Lithuanian companies concluded a contract for the supply of 150 railways wagons to be produced by the particular company in Russia. Subsequently the Lithuanian seller declared that it was not able to deliver the wagons as the Russian manufacturer on its part could not deliver them on the ground that in the meantime the Russian Government had prohibited the import of components necessary for their production from Ukraine. When the buyer terminated the contract and requested from the seller the payment of the penalty stipulated in the contract for the case of non -performance, seller challenged the termination and refused to pay the penalty invoking force majeure. 3

LSC ruling in a case No. 3 K-3 -10 -421/2015 UAB „Skinest Baltija“ v. AB „Lietuvos geležinkeliai“ n LAW: the respondent Article 256 of the CC: Where an enterprise (businessman) fails to perform its/his contractual obligation or performs it defectively, it/he shall be liable in all cases unless it/he proves that non-performance or defective performance of the obligation has resulted from a superior force unless it is otherwise provided for by laws or the contract. n LAW: the Court Article 6. 212 of the CC: A party shall be exempted from liability for nonperformance of a contract if he proves that the non-performance was due to the circumstances which were beyond his control and could not have been reasonably expected by him at the time of the conclusion of the contract, and the arising of such circumstances or consequences thereof could not be prevented. A superior force (force majeure) shall not include such circumstances as absence in the market of goods needed for the performance of the obligation, or lack of the necessary financial resources on the part of the party, or violation of their own obligations committed by the contrahents of the 4 debtor.

LSC ruling in a case No. 3 K-3 -514/2014 BUAB „Ranga IV“ v. UAB „Macro Investment“ n FACTS: Two Lithuanian companies concluded the works contract in which they agreed that the contractor would not be paid in money but with goods produced by the customer (i. e. plastic windows). When subsequently the contractor became insolvent and terminated its activity, it requested revision of the agreed method of payment and to be paid in money for the work it had already done. 5

LSC ruling in a case No. 3 K-3 -514/2014 BUAB „Ranga IV“ v. UAB „Macro Investment“ n THE COURT: for there to be hardship there must be a fundamental alteration of the equilibrium of the contract, and that the supervening insolvency of the contractor would not justify a revision of the agreed method of payment as the contractor had not proved that the originally agreed method of payment had fundamentally increased the cost of its performance or diminished the value of the counter-performance. 7

LSC ruling in a case No. 3 K-7 -306/2012 J. G. v. AB SEB bankas n FACTS: In 2005 Lithuanian natural person and Scandinavian bank entered the loan contract for 681 543, 57 EUR loan for a 7 years period. The purpose of loan – acquisition of commercial premises. Due to its financial situation (the 50% fall of income received for premises` rent) the debtor was delayed with monthly payments to the bank (in 2009 the debt reached 18 000 EUR in 5 months period) and requested the bank 5 times to revise the repayment terms. When the bank refused the revision and terminated the contract in 2009, the debtor brought an action for the termination of the contract to be announced void. The claim was based on the favor contractus principle, which obliges the parties to cooperate in order to safeguard the contract. This, according to the applicant means that after receiving 5 requests to revise the repayment terms the bank could not terminate agreement unilaterally. 8

LSC ruling in a case No. 3 K-7 -306/2012 J. G. v. AB SEB bankas LAW: the applicant Article 6. 204 of the CC: In the event where the performance of a contract becomes obstructed, the aggrieved party shall have the right to make a request to the other party for the modification of the contract. Such request shall have to be made immediately after the occurrence of obstructions and the grounds on which the request is based indicated therein. The request for modification of the contract shall not in itself entitle the aggrieved party with the right to suspend performance of the contract. Where n within a reasonable time the parties fail to reach an agreement on the modification of the contractual obligations, any of them may bring an action into a court. The court may: (1) dissolve the contract and establish the date and terms of its dissolution; 2) modify the conditions of the contract with a view to restoring the balance of the contractual obligations of the parties. n THE COURT: according to the Article 6. 204 of the Lithuanian Civil Code and Articles 6. 2. 1, 6. 2. 2. and 6. 2. 3 of the UNIDROIT Principles the claim for adaptation for the contract should be submitted without an unreasonable delay after the party gets the refusal for alteration of another party. The request for renegotiation does not restrict the right of another party to terminate the contract for non-performance. 9

LSC ruling in a case No. 3 K-3 -265/2011 UAB “Europa group” v. UAB “Kleta” n FACTS: Two Lithuanian companies concluded a renting contract for a building that lessee used for accommodation services (hotel). Parties agreed that rent price is 50 LTL/sq. m. During the economic crisis, number of tourists dropped down, the VAT for hotels was increased from 5 to 21 percent and market prices for similar buildings in the same area decreased to average price of 33 LTL/ sq. m. The lessee applied to the court a request for the modification of the contract – i. e. to decrease the rent price. 10

LSC ruling in a case No. 3 K-3 -265/2011 UAB “Europa group” v. UAB “Kleta” n n THE COURT: the fact that one party has to pay the same rent price as it did before does not mean the cost of party's performance has not increased. Due to economic crisis, even the same contract price can fundamentally alter the equilibrium of the contract. The Court decided that parties should share the effects of financial crises and decreased the rent price. QUESTION: if the agreed price was 50 LTL/sq. m and current market price is 33 LTL/sq. m, what could be the new fair price set by the court? 11