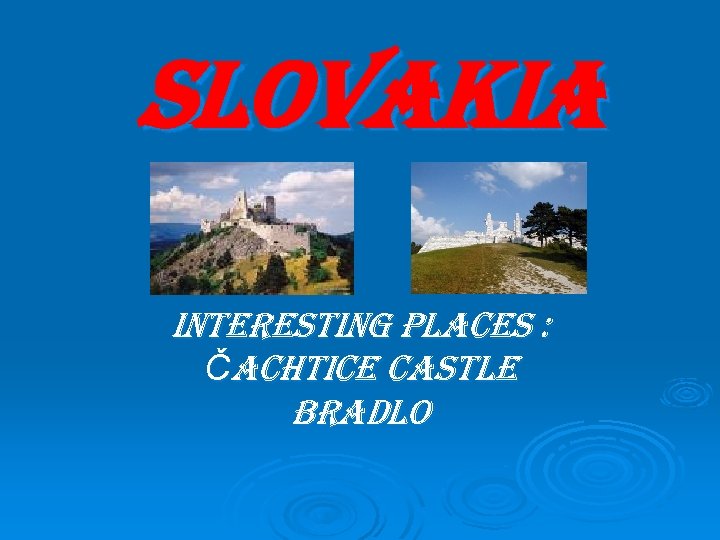 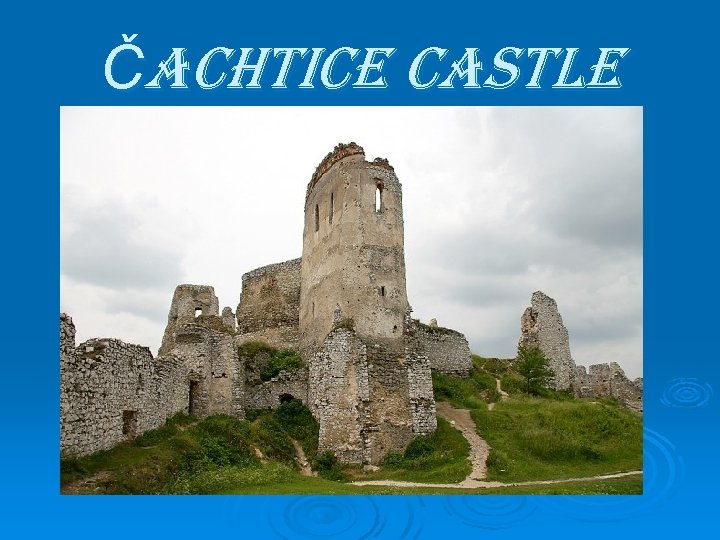 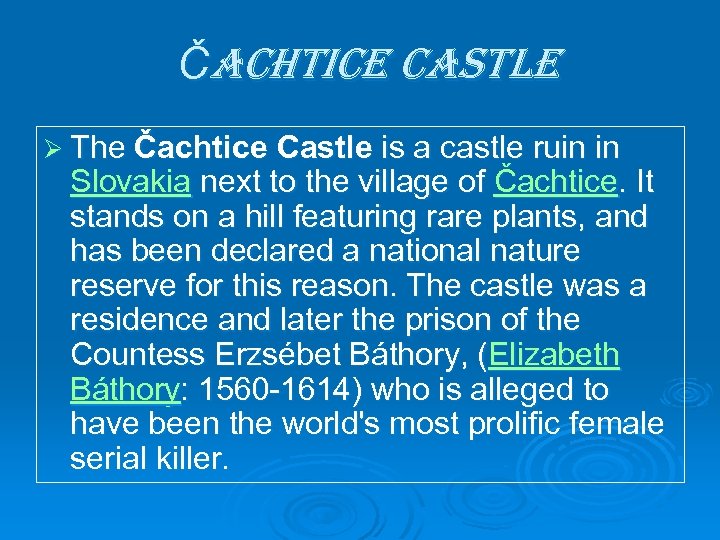 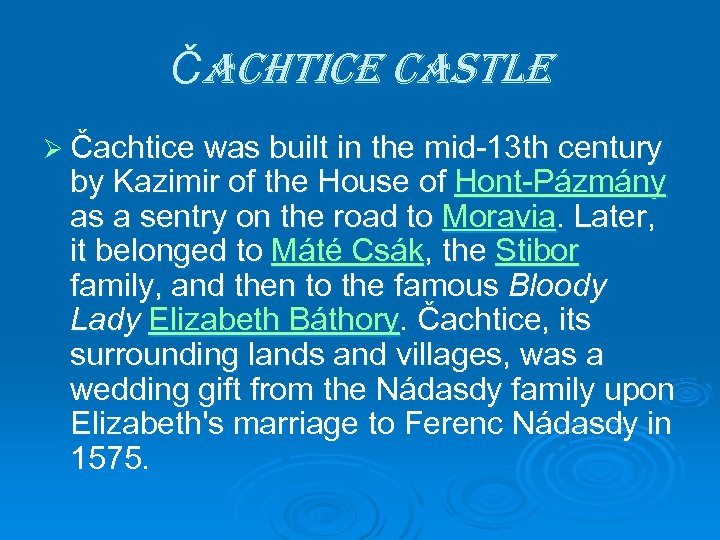 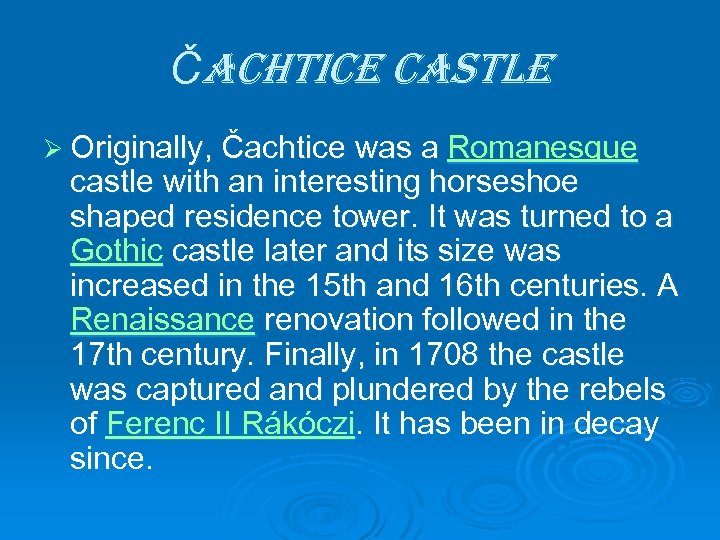 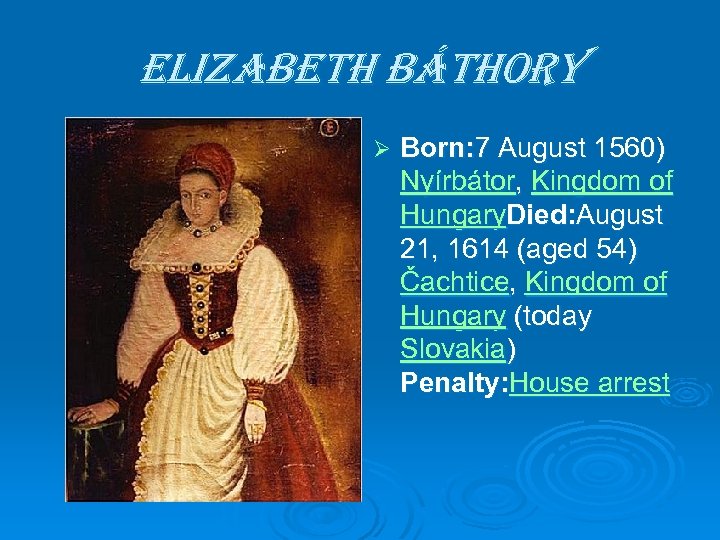 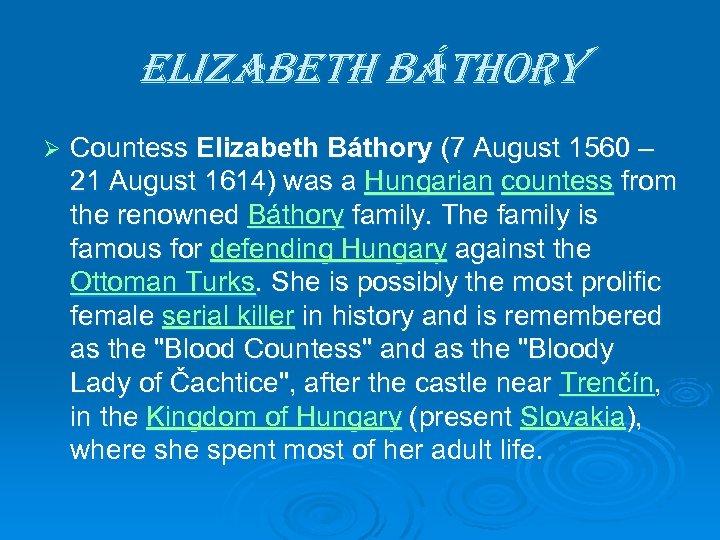 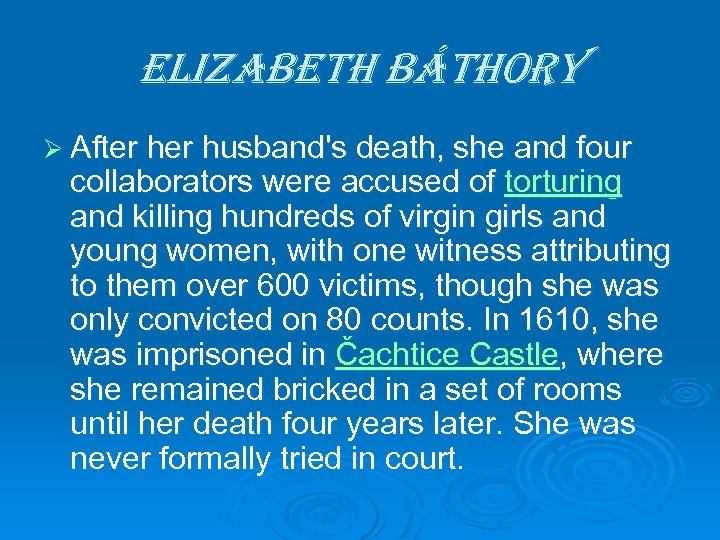 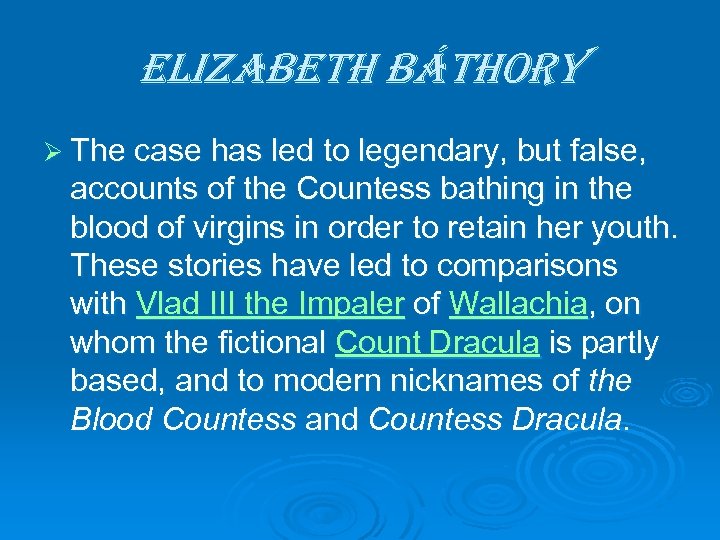 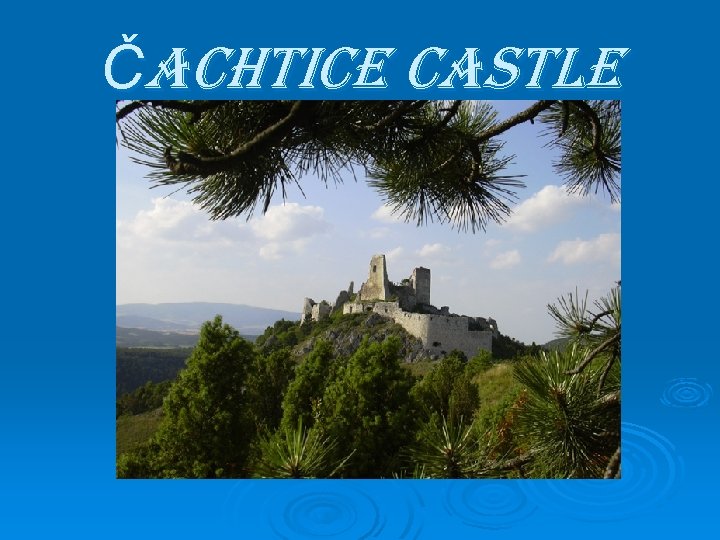 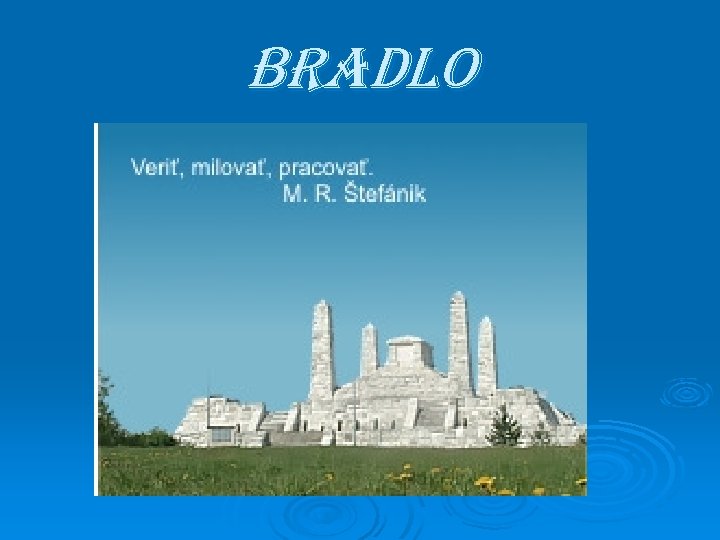 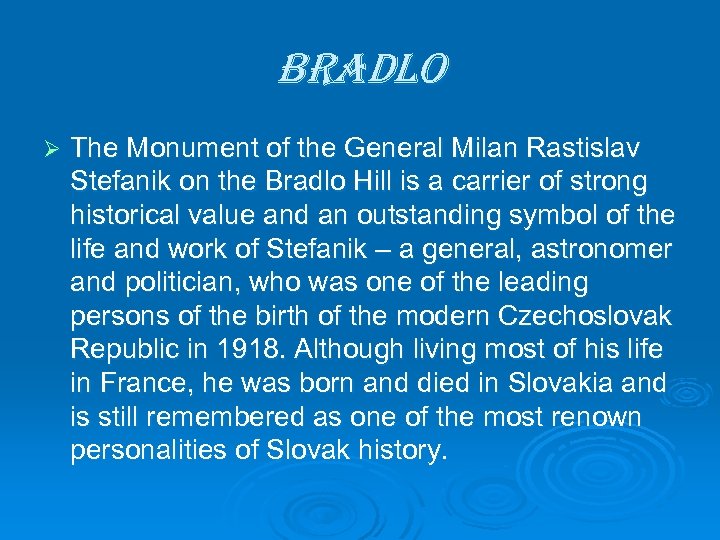 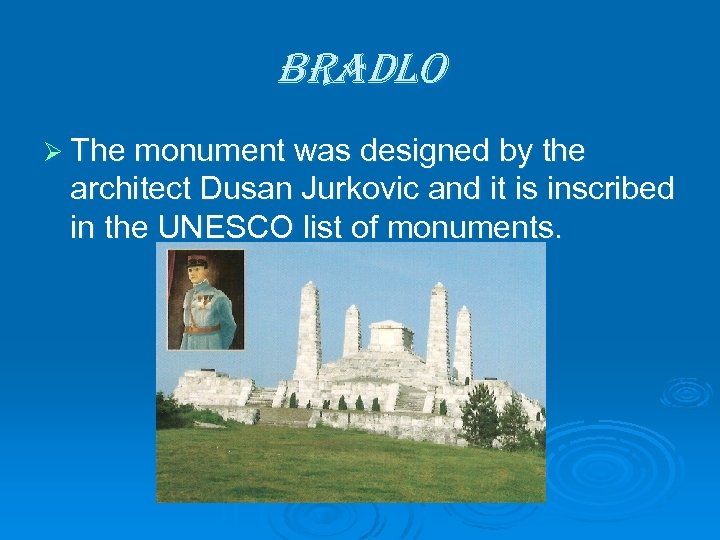 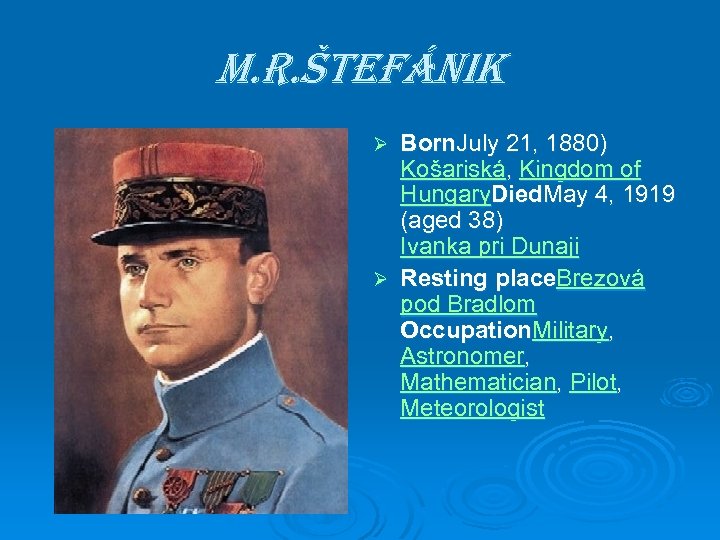 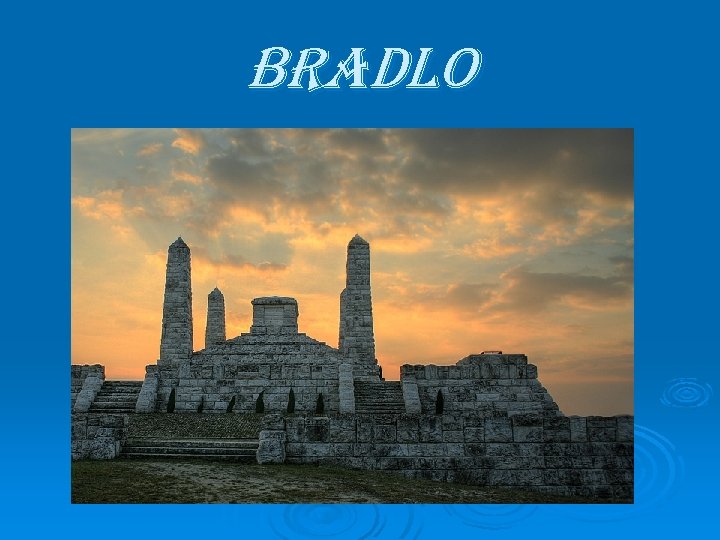 Čachtice castle Ø The Čachtice Castle is a castle ruin in Slovakia next to the village of Čachtice. It stands on a hill featuring rare plants, and has been declared a national nature reserve for this reason. The castle was a residence and later the prison of the Countess Erzsébet Báthory, (Elizabeth Báthory: 1560 -1614) who is alleged to have been the world's most prolific female serial killer.

Čachtice castle Ø Čachtice was built in the mid-13 th century by Kazimir of the House of Hont-Pázmány as a sentry on the road to Moravia. Later, it belonged to Máté Csák, the Stibor family, and then to the famous Bloody Lady Elizabeth Báthory. Čachtice, its surrounding lands and villages, was a wedding gift from the Nádasdy family upon Elizabeth's marriage to Ferenc Nádasdy in 1575.

Čachtice castle Ø Originally, Čachtice was a Romanesque castle with an interesting horseshoe shaped residence tower. It was turned to a Gothic castle later and its size was increased in the 15 th and 16 th centuries. A Renaissance renovation followed in the 17 th century. Finally, in 1708 the castle was captured and plundered by the rebels of Ferenc II Rákóczi. It has been in decay since.

elizabeth báthory Ø Countess Elizabeth Báthory (7 August 1560 – 21 August 1614) was a Hungarian countess from the renowned Báthory family. The family is famous for defending Hungary against the Ottoman Turks. She is possibly the most prolific female serial killer in history and is remembered as the "Blood Countess" and as the "Bloody Lady of Čachtice", after the castle near Trenčín, in the Kingdom of Hungary (present Slovakia), where she spent most of her adult life.

elizabeth báthory Ø After husband's death, she and four collaborators were accused of torturing and killing hundreds of virgin girls and young women, with one witness attributing to them over 600 victims, though she was only convicted on 80 counts. In 1610, she was imprisoned in Čachtice Castle, where she remained bricked in a set of rooms until her death four years later. She was never formally tried in court.

elizabeth báthory Ø The case has led to legendary, but false, accounts of the Countess bathing in the blood of virgins in order to retain her youth. These stories have led to comparisons with Vlad III the Impaler of Wallachia, on whom the fictional Count Dracula is partly based, and to modern nicknames of the Blood Countess and Countess Dracula.

bra. Dlo Ø The Monument of the General Milan Rastislav Stefanik on the Bradlo Hill is a carrier of strong historical value and an outstanding symbol of the life and work of Stefanik – a general, astronomer and politician, who was one of the leading persons of the birth of the modern Czechoslovak Republic in 1918. Although living most of his life in France, he was born and died in Slovakia and is still remembered as one of the most renown personalities of Slovak history.

bra. Dlo Ø The monument was designed by the architect Dusan Jurkovic and it is inscribed in the UNESCO list of monuments.

Enjoy your holiday in the unexplored beauty of

For much of the year, Buckingham Palace