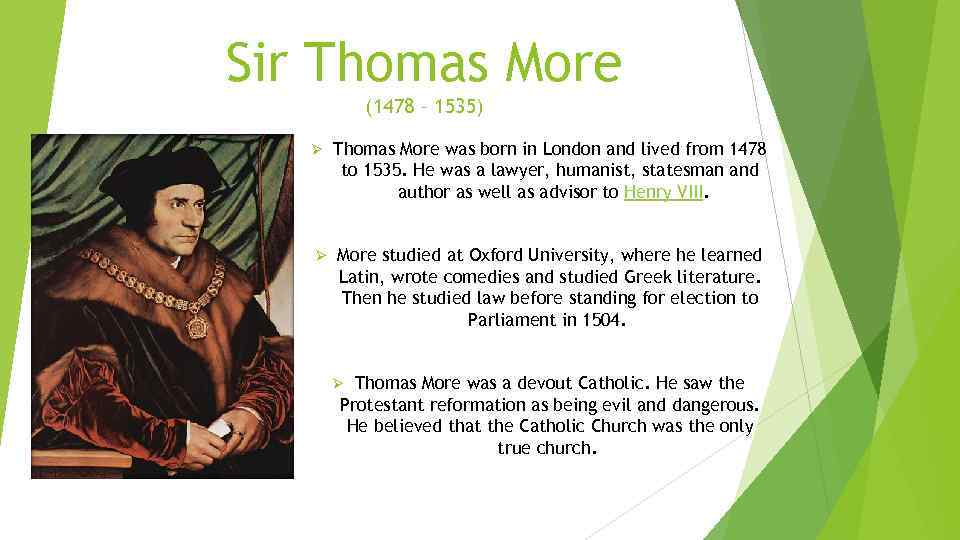 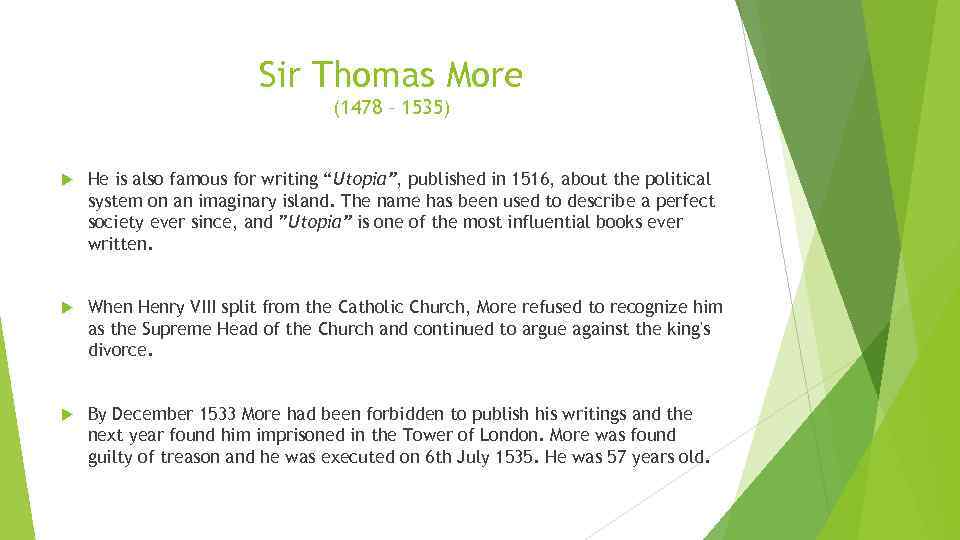 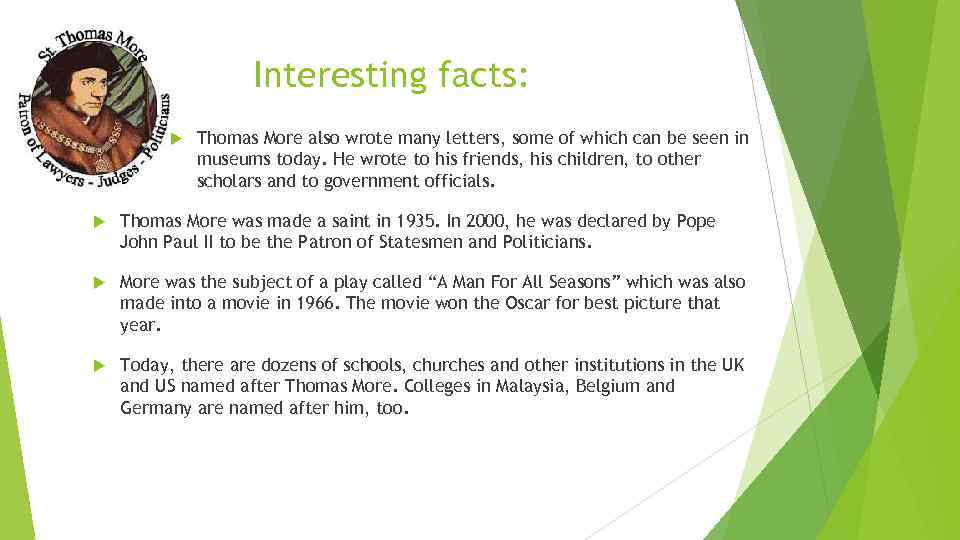 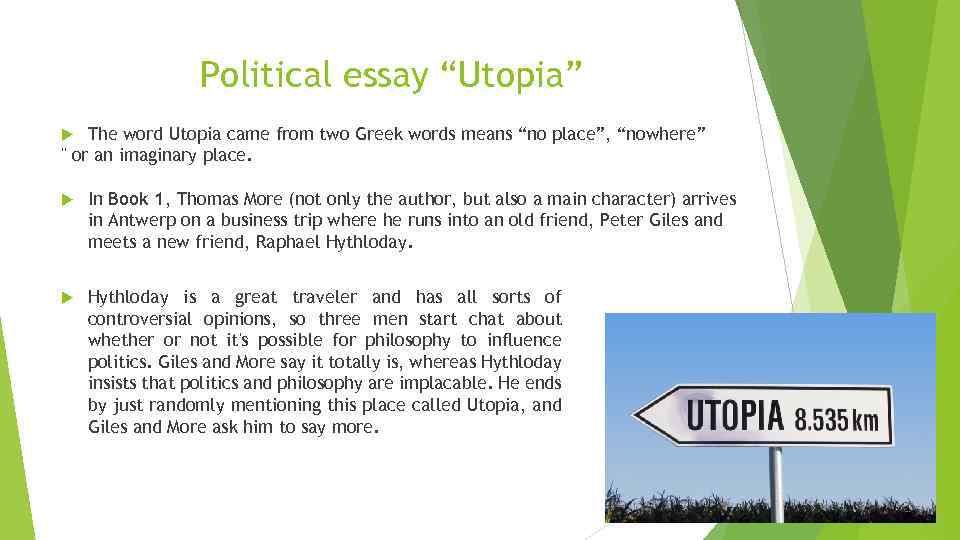 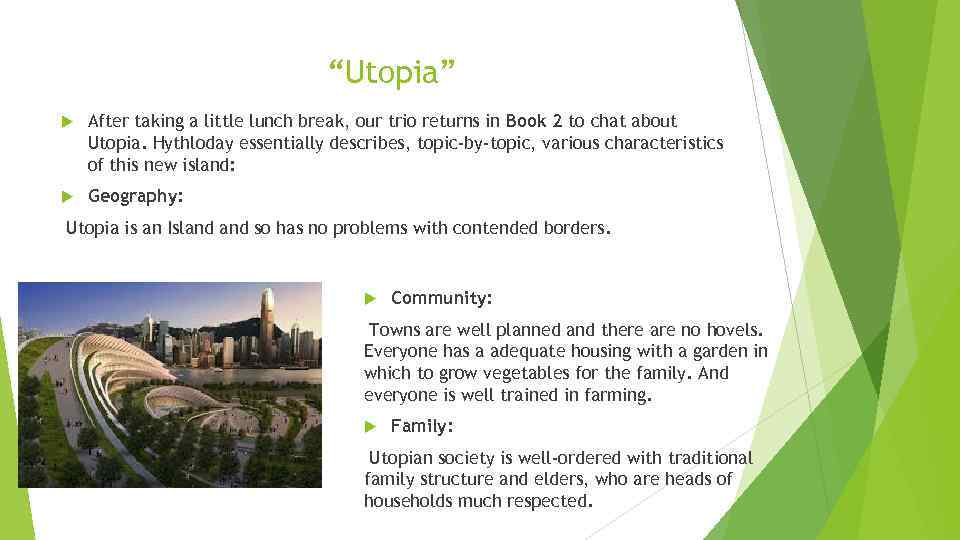 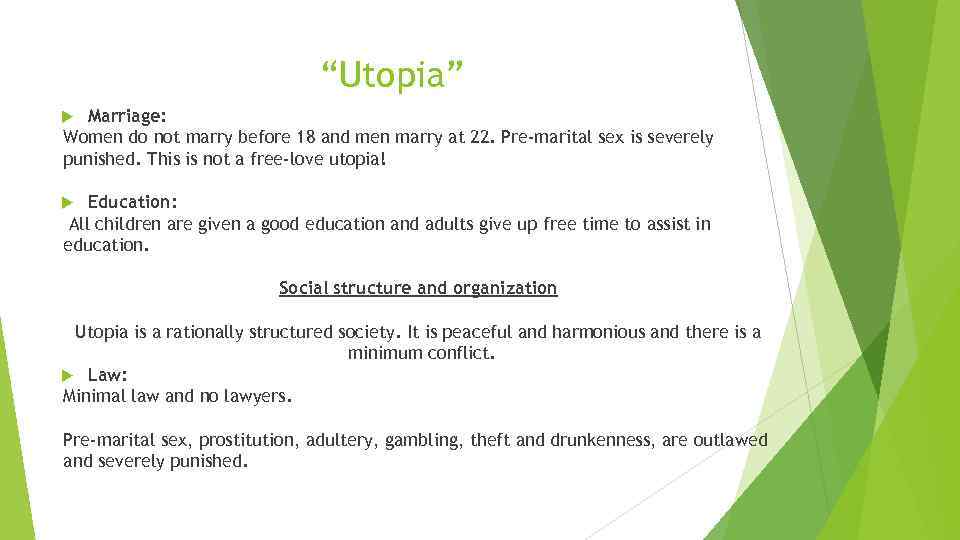 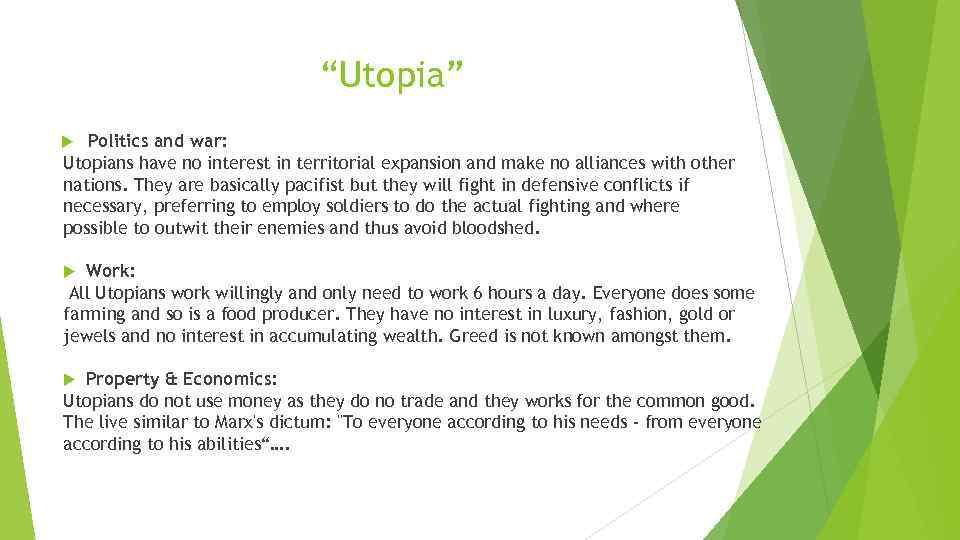 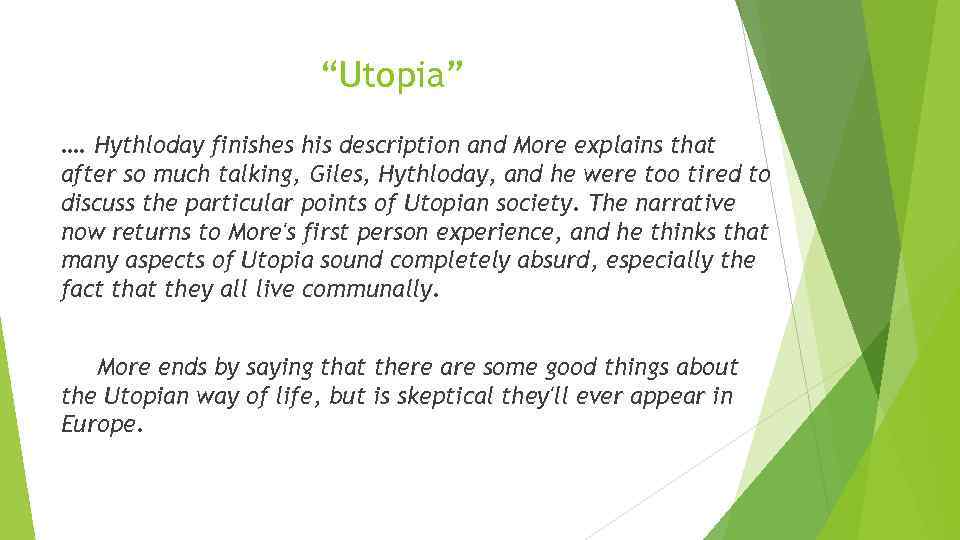 Sir Thomas More (1478 – 1535) Ø Thomas More was born in London and lived from 1478 to 1535. He was a lawyer, humanist, statesman and author as well as advisor to Henry VIII. Ø More studied at Oxford University, where he learned Latin, wrote comedies and studied Greek literature. Then he studied law before standing for election to Parliament in 1504. Thomas More was a devout Catholic. He saw the Protestant reformation as being evil and dangerous. He believed that the Catholic Church was the only true church. Ø

Sir Thomas More (1478 – 1535) He is also famous for writing “Utopia”, published in 1516, about the political system on an imaginary island. The name has been used to describe a perfect society ever since, and ”Utopia” is one of the most influential books ever written. When Henry VIII split from the Catholic Church, More refused to recognize him as the Supreme Head of the Church and continued to argue against the king's divorce. By December 1533 More had been forbidden to publish his writings and the next year found him imprisoned in the Tower of London. More was found guilty of treason and he was executed on 6 th July 1535. He was 57 years old.

Interesting facts: Thomas More also wrote many letters, some of which can be seen in museums today. He wrote to his friends, his children, to other scholars and to government officials. Thomas More was made a saint in 1935. In 2000, he was declared by Pope John Paul II to be the Patron of Statesmen and Politicians. More was the subject of a play called “A Man For All Seasons” which was also made into a movie in 1966. The movie won the Oscar for best picture that year. Today, there are dozens of schools, churches and other institutions in the UK and US named after Thomas More. Colleges in Malaysia, Belgium and Germany are named after him, too.

Political essay “Utopia” The word Utopia came from two Greek words means “no place”, “nowhere” " or an imaginary place. In Book 1, Thomas More (not only the author, but also a main character) arrives in Antwerp on a business trip where he runs into an old friend, Peter Giles and meets a new friend, Raphael Hythloday is a great traveler and has all sorts of controversial opinions, so three men start chat about whether or not it's possible for philosophy to influence politics. Giles and More say it totally is, whereas Hythloday insists that politics and philosophy are implacable. He ends by just randomly mentioning this place called Utopia, and Giles and More ask him to say more.

“Utopia” After taking a little lunch break, our trio returns in Book 2 to chat about Utopia. Hythloday essentially describes, topic-by-topic, various characteristics of this new island: Geography: Utopia is an Island so has no problems with contended borders. Community: Towns are well planned and there are no hovels. Everyone has a adequate housing with a garden in which to grow vegetables for the family. And everyone is well trained in farming. Family: Utopian society is well-ordered with traditional family structure and elders, who are heads of households much respected.

“Utopia” Marriage: Women do not marry before 18 and men marry at 22. Pre-marital sex is severely punished. This is not a free-love utopia! Education: All children are given a good education and adults give up free time to assist in education. Social structure and organization Utopia is a rationally structured society. It is peaceful and harmonious and there is a minimum conflict. Law: Minimal law and no lawyers. Pre-marital sex, prostitution, adultery, gambling, theft and drunkenness, are outlawed and severely punished.

“Utopia” Politics and war: Utopians have no interest in territorial expansion and make no alliances with other nations. They are basically pacifist but they will fight in defensive conflicts if necessary, preferring to employ soldiers to do the actual fighting and where possible to outwit their enemies and thus avoid bloodshed. Work: All Utopians work willingly and only need to work 6 hours a day. Everyone does some farming and so is a food producer. They have no interest in luxury, fashion, gold or jewels and no interest in accumulating wealth. Greed is not known amongst them. Property & Economics: Utopians do not use money as they do no trade and they works for the common good. The live similar to Marx's dictum: "To everyone according to his needs - from everyone according to his abilities“….

“Utopia” …. Hythloday finishes his description and More explains that after so much talking, Giles, Hythloday, and he were too tired to discuss the particular points of Utopian society. The narrative now returns to More's first person experience, and he thinks that many aspects of Utopia sound completely absurd, especially the fact that they all live communally. More ends by saying that there are some good things about the Utopian way of life, but is skeptical they'll ever appear in Europe.