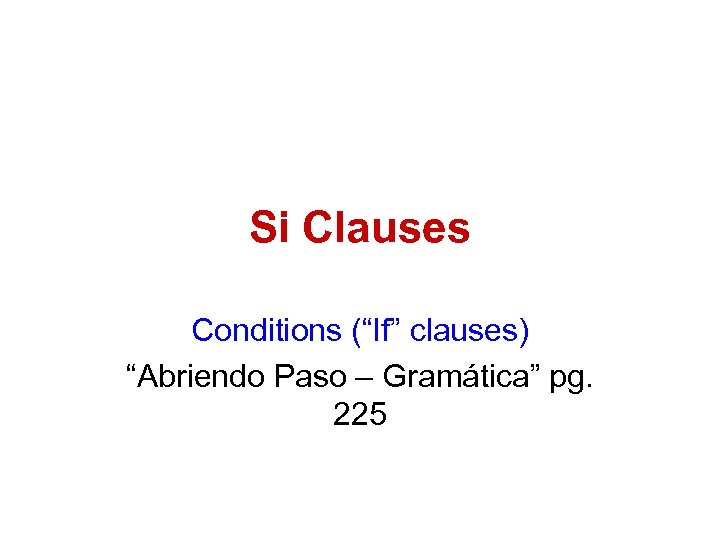 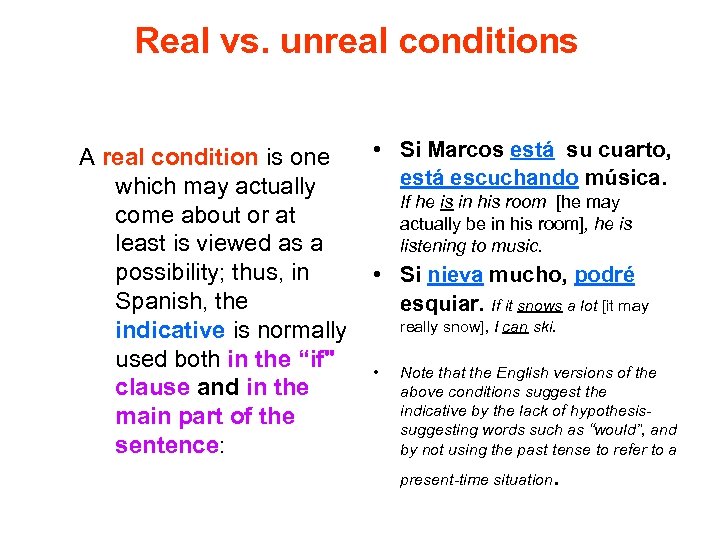 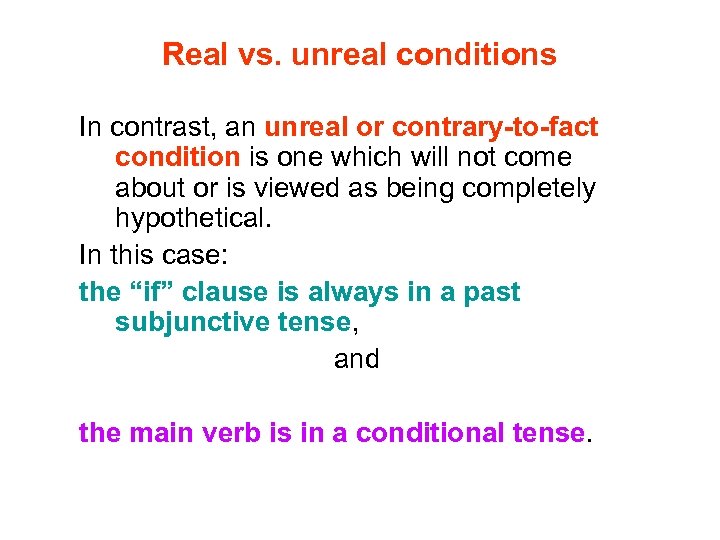 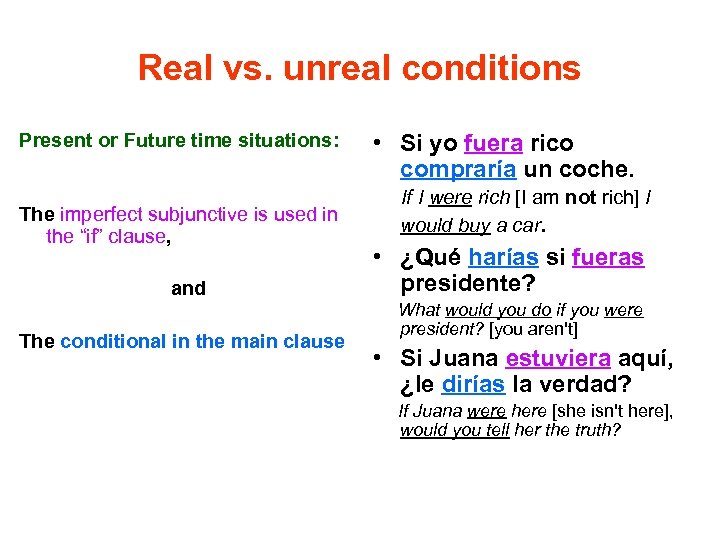 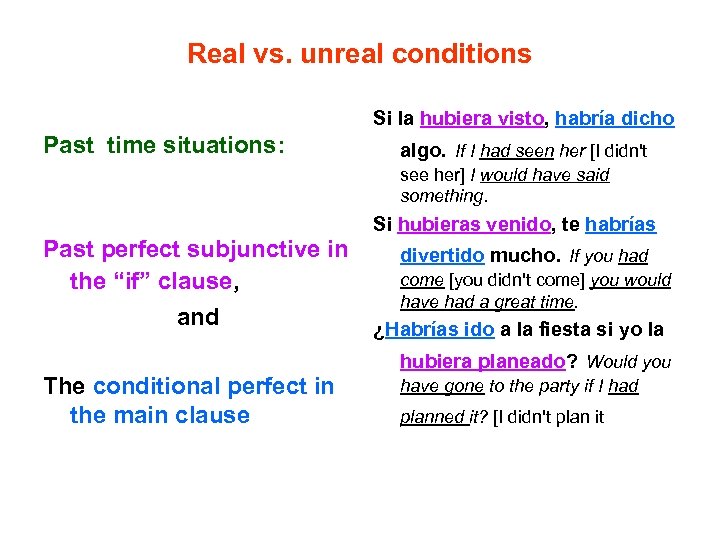 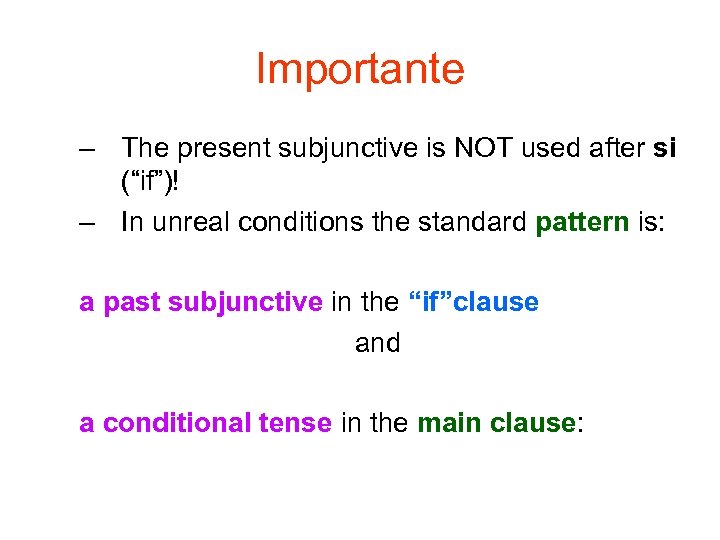 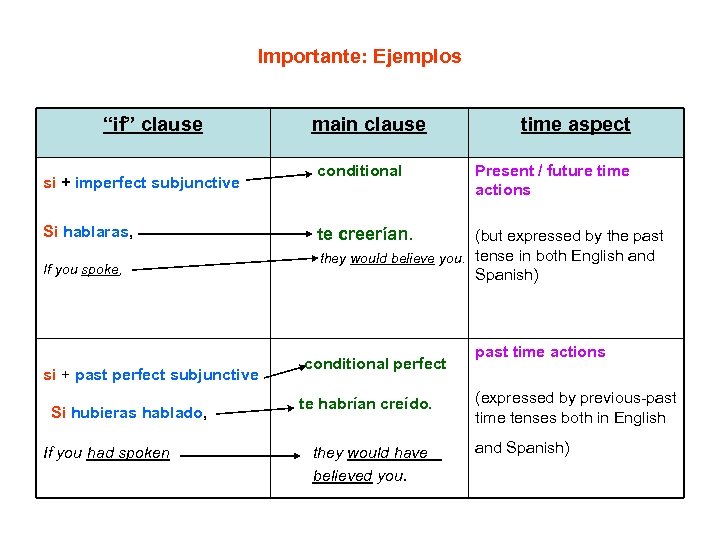 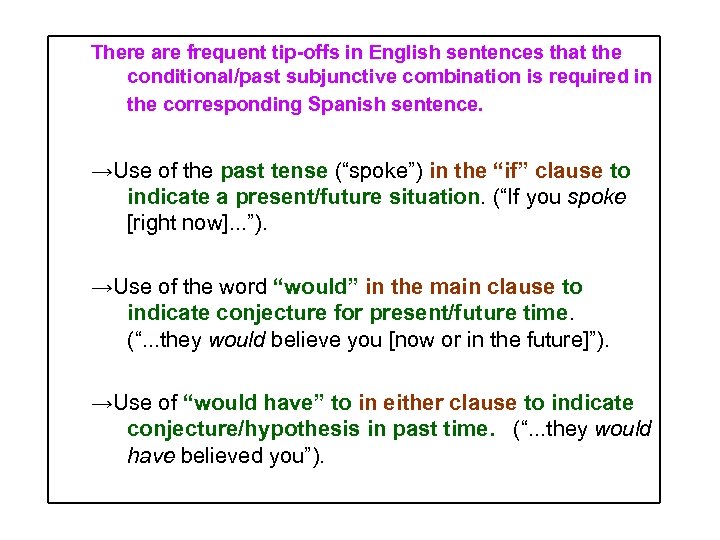 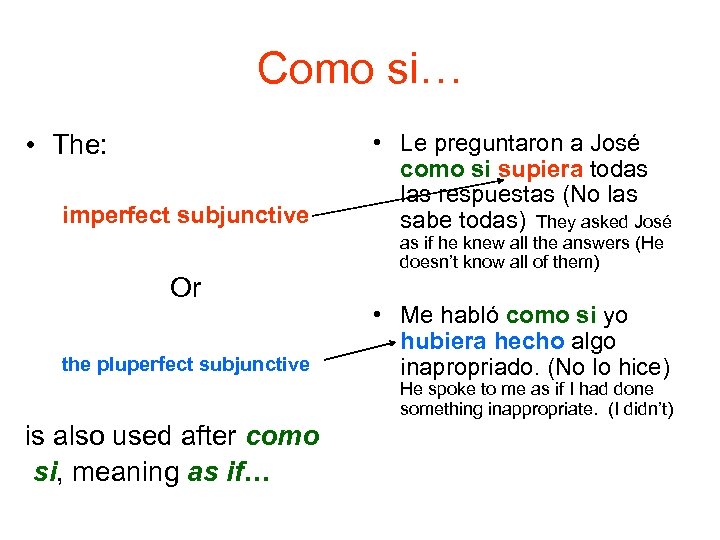 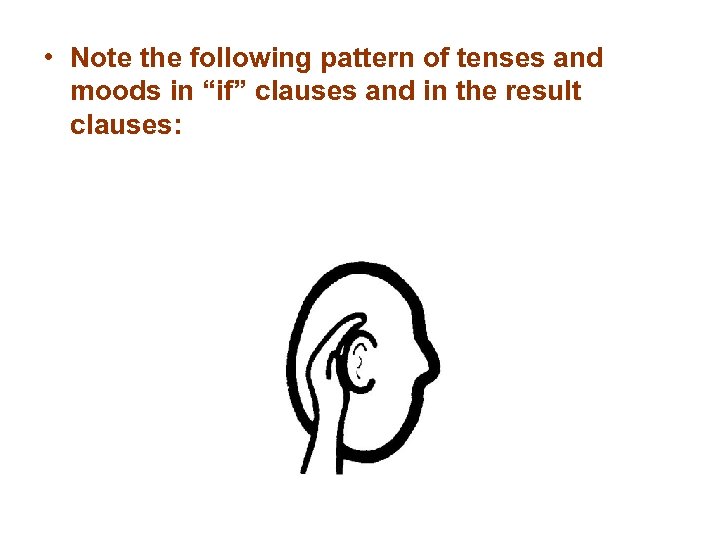 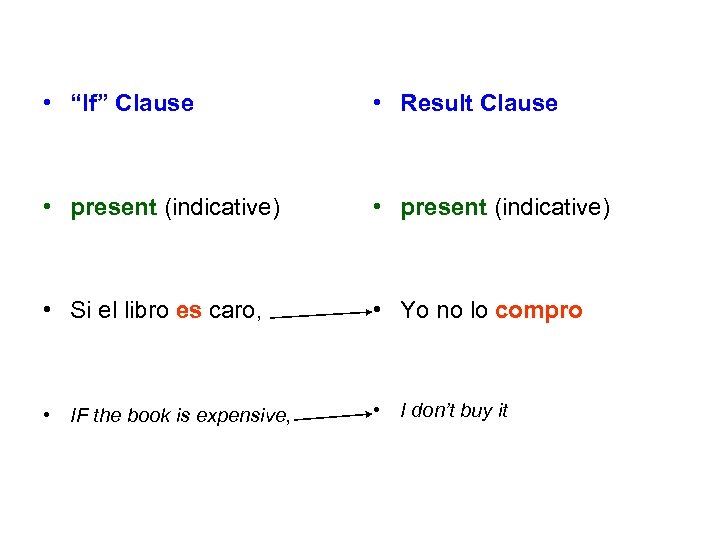 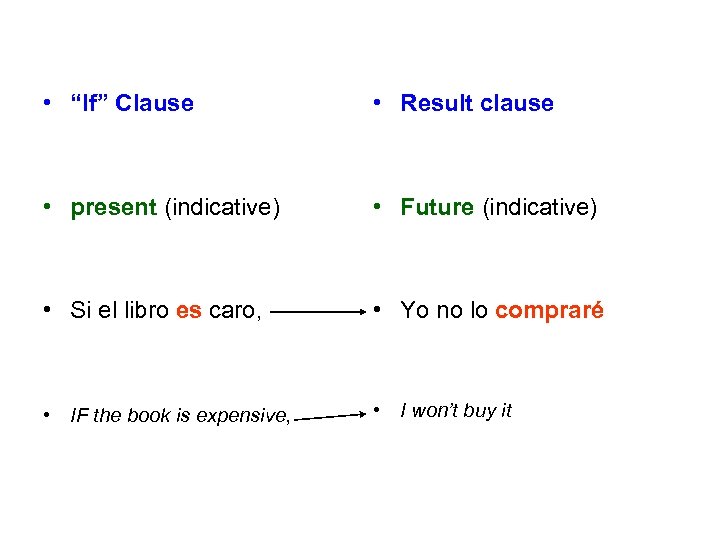 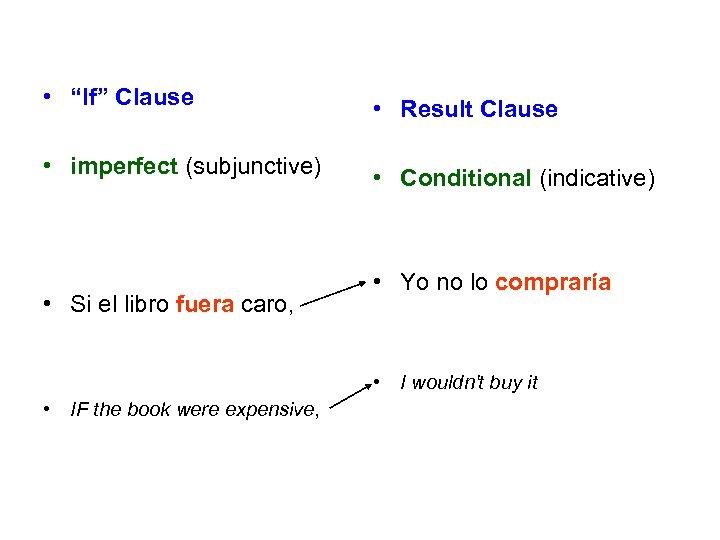 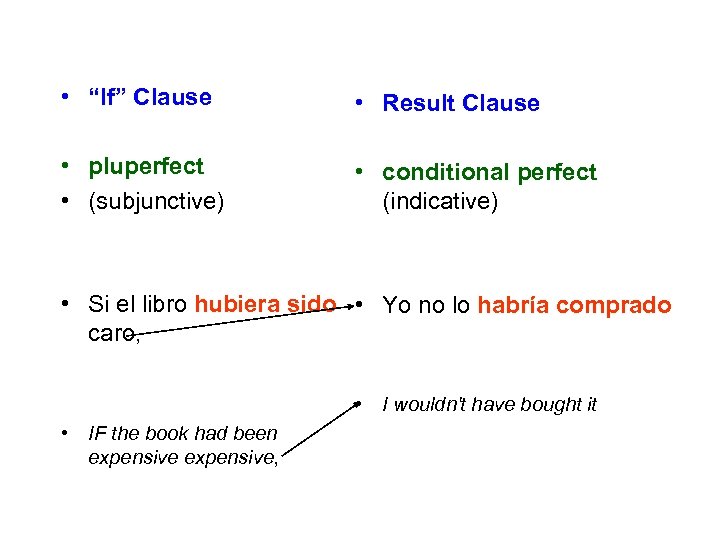 Real vs. unreal conditions A real condition is one which may actually come about or at least is viewed as a possibility; thus, in Spanish, the indicative is normally used both in the “if" clause and in the main part of the sentence: • Si Marcos está su cuarto, está escuchando música. If he is in his room [he may actually be in his room], he is listening to music. • Si nieva mucho, podré esquiar. If it snows a lot [it may really snow], I can ski. • Note that the English versions of the above conditions suggest the indicative by the lack of hypothesissuggesting words such as “would”, and by not using the past tense to refer to a present-time situation .

Real vs. unreal conditions In contrast, an unreal or contrary-to-fact condition is one which will not come about or is viewed as being completely hypothetical. In this case: the “if” clause is always in a past subjunctive tense, and the main verb is in a conditional tense.

Real vs. unreal conditions Present or Future time situations: The imperfect subjunctive is used in the “if” clause, and The conditional in the main clause • Si yo fuera rico compraría un coche. If I were rich [I am not rich] I would buy a car. • ¿Qué harías si fueras presidente? What would you do if you were president? [you aren't] • Si Juana estuviera aquí, ¿le dirías la verdad? If Juana were here [she isn't here], would you tell her the truth?

Real vs. unreal conditions Si la hubiera visto, habría dicho Past time situations: algo. If I had seen her [I didn't see her] I would have said something. Si hubieras venido, te habrías Past perfect subjunctive in divertido mucho. If you had come [you didn't come] you would the “if” clause, have had a great time. and ¿Habrías ido a la fiesta si yo la The conditional perfect in the main clause hubiera planeado? Would you have gone to the party if I had planned it? [I didn't plan it

Importante – The present subjunctive is NOT used after si (“if”)! – In unreal conditions the standard pattern is: a past subjunctive in the “if”clause and a conditional tense in the main clause:

Importante: Ejemplos “if” clause si + imperfect subjunctive Si hablaras, If you spoke, si + past perfect subjunctive Si hubieras hablado, If you had spoken main clause conditional time aspect Present / future time actions te creerían. (but expressed by the past they would believe you. tense in both English and Spanish) conditional perfect te habrían creído. they would have believed you. past time actions (expressed by previous-past time tenses both in English and Spanish)

There are frequent tip-offs in English sentences that the conditional/past subjunctive combination is required in the corresponding Spanish sentence. →Use of the past tense (“spoke”) in the “if” clause to indicate a present/future situation. (“If you spoke [right now]. . . ”). →Use of the word “would” in the main clause to indicate conjecture for present/future time. (“. . . they would believe you [now or in the future]”). →Use of “would have” to in either clause to indicate conjecture/hypothesis in past time. (“. . . they would have believed you”).

Como si… • The: imperfect subjunctive Or the pluperfect subjunctive • Le preguntaron a José como si supiera todas las respuestas (No las sabe todas) They asked José as if he knew all the answers (He doesn’t know all of them) • Me habló como si yo hubiera hecho algo inapropriado. (No lo hice) He spoke to me as if I had done something inappropriate. (I didn’t) is also used after como si, meaning as if…

• Note the following pattern of tenses and moods in “if” clauses and in the result clauses:

• “If” Clause • Result Clause • imperfect (subjunctive) • Conditional (indicative) • Si el libro fuera caro, • Yo no lo compraría • I wouldn't buy it • IF the book were expensive,

• “If” Clause • Result Clause • pluperfect • (subjunctive) • conditional perfect (indicative) • Si el libro hubiera sido • Yo no lo habría comprado caro, • I wouldn't have bought it • IF the book had been expensive,