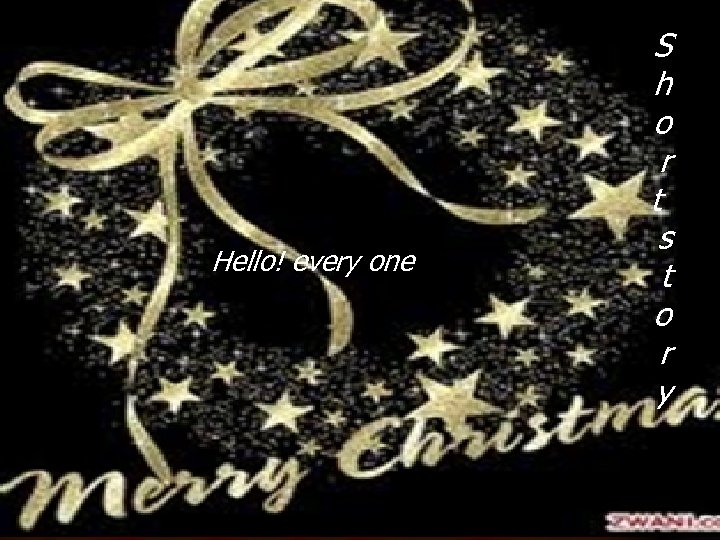 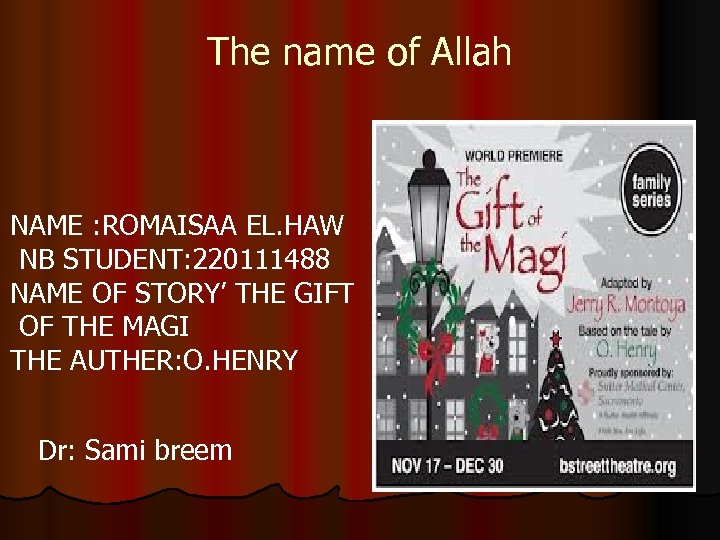 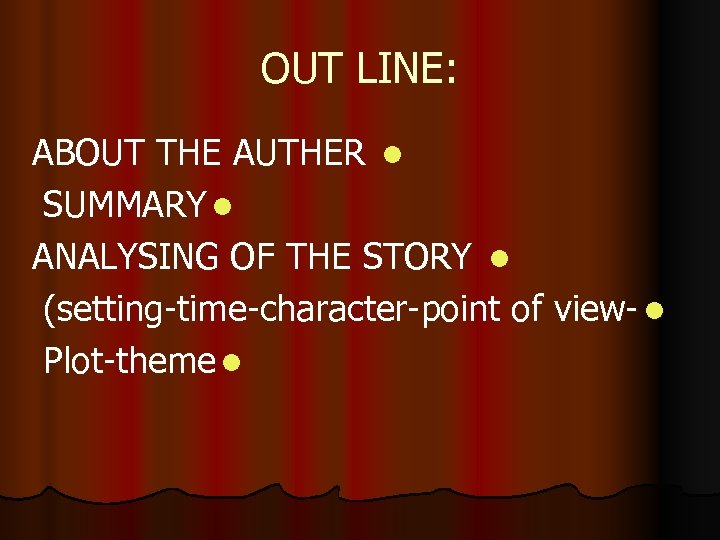 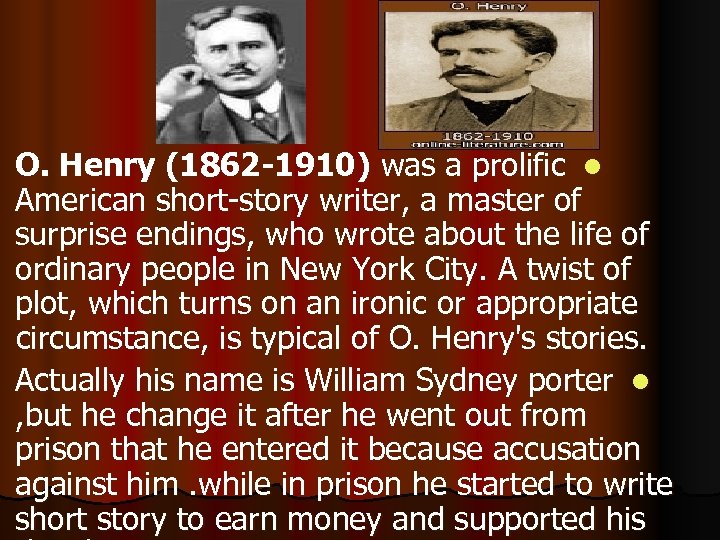 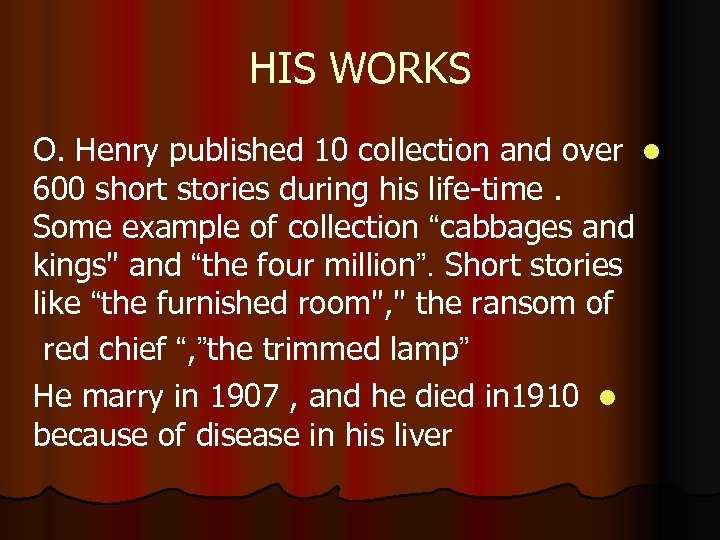 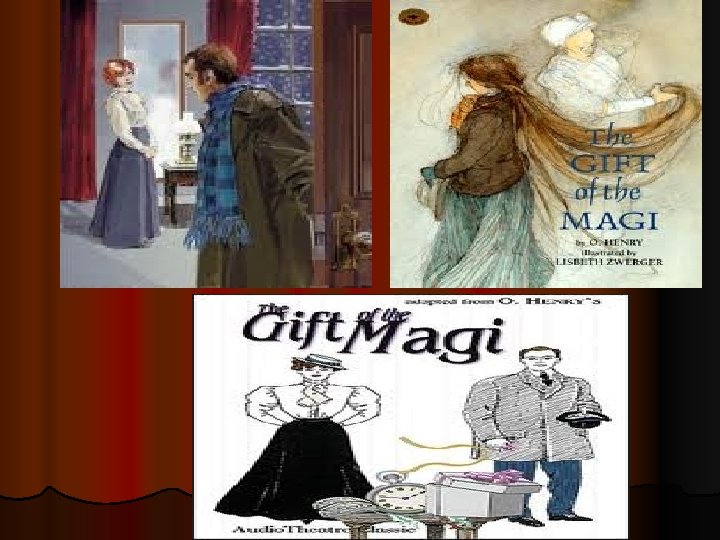 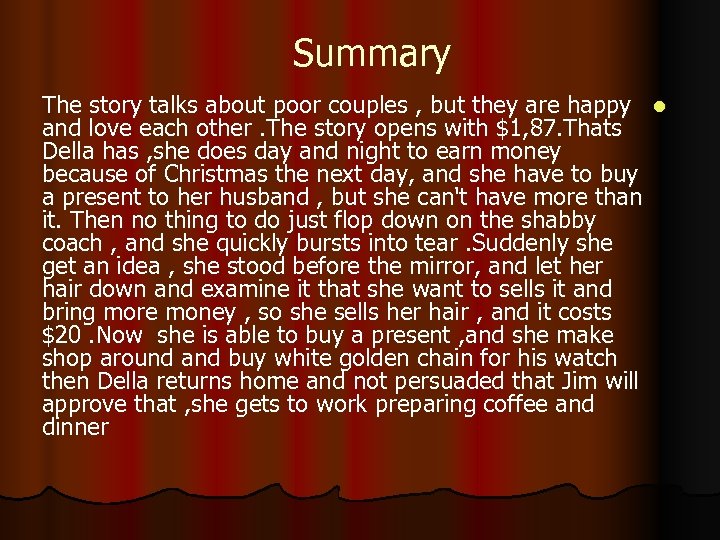 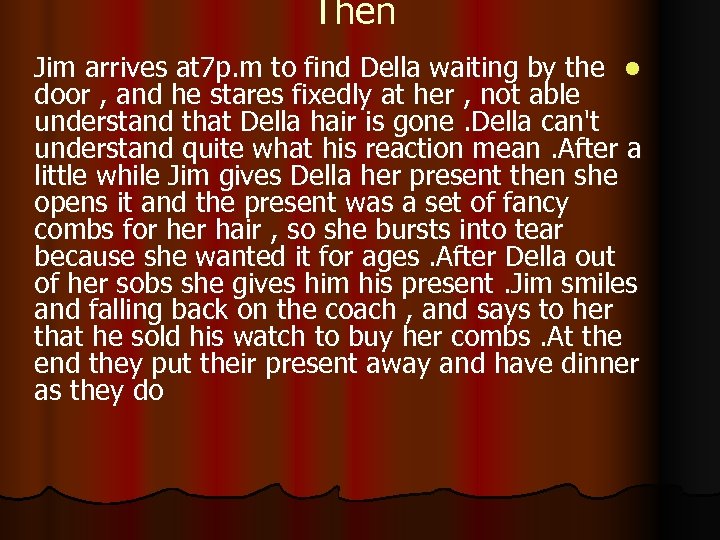 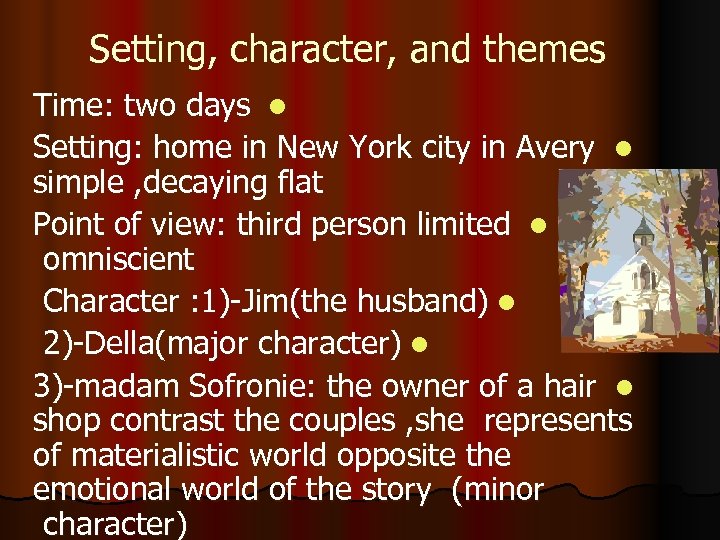 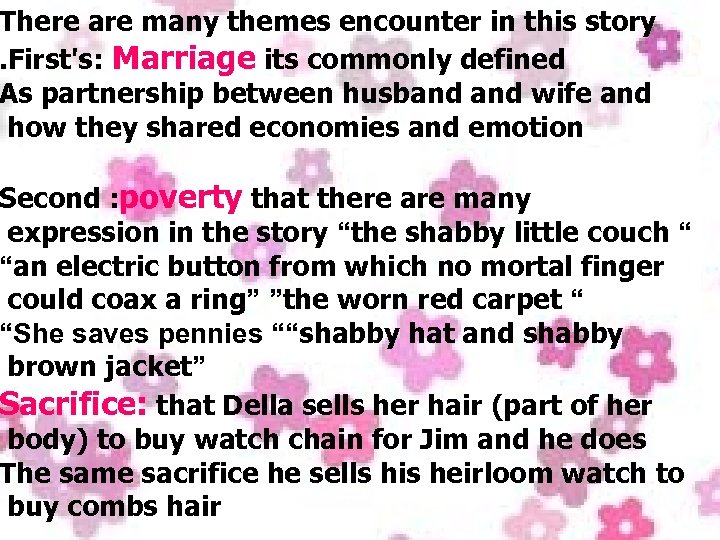 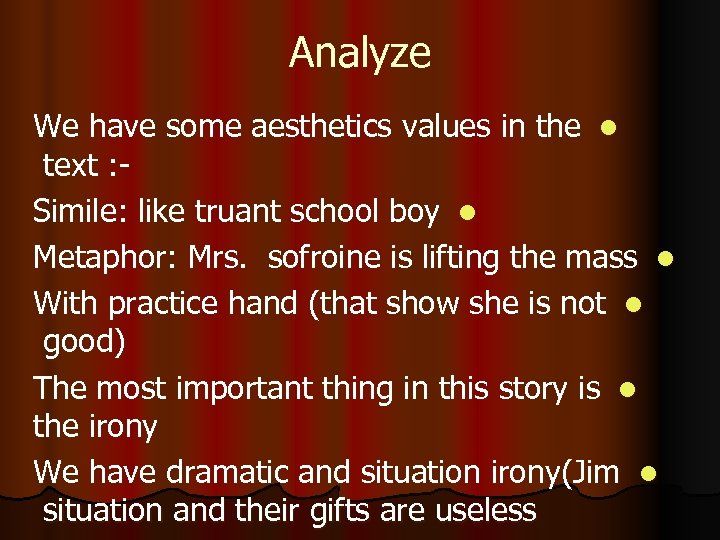 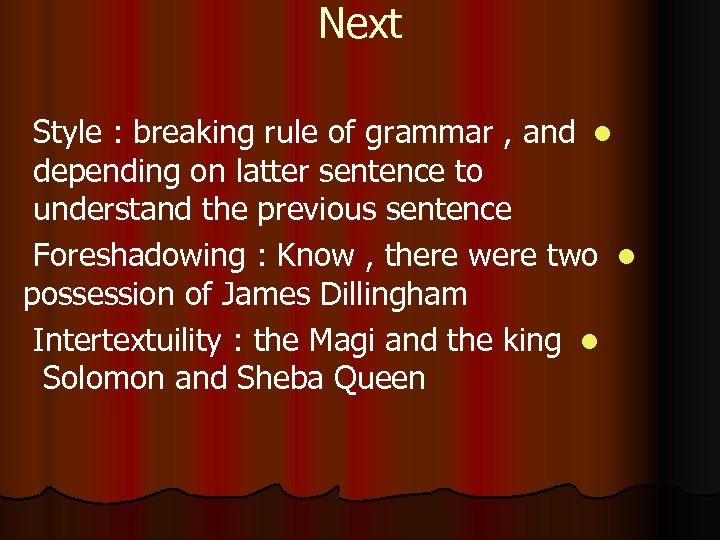 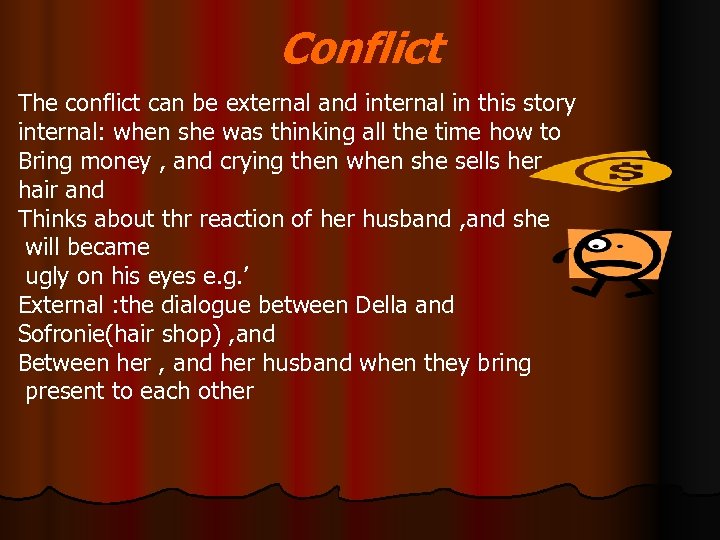 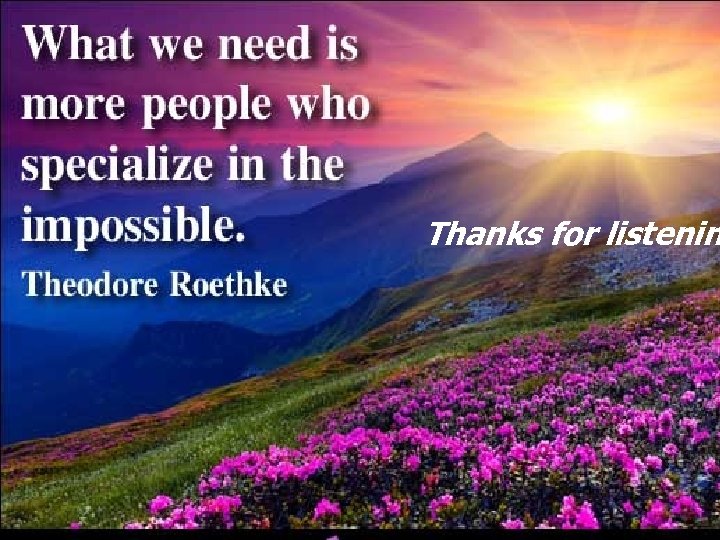 OUT LINE: ABOUT THE AUTHER l SUMMARY l ANALYSING OF THE STORY l (setting-time-character-point of view- l Plot-theme l

O. Henry (1862 -1910) was a prolific l American short-story writer, a master of surprise endings, who wrote about the life of ordinary people in New York City. A twist of plot, which turns on an ironic or appropriate circumstance, is typical of O. Henry's stories. Actually his name is William Sydney porter l , but he change it after he went out from prison that he entered it because accusation against him. while in prison he started to write short story to earn money and supported his

HIS WORKS O. Henry published 10 collection and over l 600 short stories during his life-time. Some example of collection “cabbages and kings" and “the four million”. Short stories like “the furnished room", " the ransom of red chief “, ”the trimmed lamp” He marry in 1907 , and he died in 1910 l because of disease in his liver

Summary The story talks about poor couples , but they are happy l and love each other. The story opens with $1, 87. Thats Della has , she does day and night to earn money because of Christmas the next day, and she have to buy a present to her husband , but she can't have more than it. Then no thing to do just flop down on the shabby coach , and she quickly bursts into tear. Suddenly she get an idea , she stood before the mirror, and let her hair down and examine it that she want to sells it and bring more money , so she sells her hair , and it costs $20. Now she is able to buy a present , and she make shop around and buy white golden chain for his watch then Della returns home and not persuaded that Jim will approve that , she gets to work preparing coffee and dinner

Then Jim arrives at 7 p. m to find Della waiting by the l door , and he stares fixedly at her , not able understand that Della hair is gone. Della can't understand quite what his reaction mean. After a little while Jim gives Della her present then she opens it and the present was a set of fancy combs for her hair , so she bursts into tear because she wanted it for ages. After Della out of her sobs she gives him his present. Jim smiles and falling back on the coach , and says to her that he sold his watch to buy her combs. At the end they put their present away and have dinner as they do

The plot When Jim arrive and shocked by Dell’s short Hair , and she didn’t no his looks what mean climax The only solution is selling her long Hair in hair shop She was thinking how to earn money In front of the window Della opens the present, and Finds it combs to her hair Della gives her husband the chain , But he sells the watch to buy Della’s present Initial situation The story starts with sentence “one dollar and 87 cents” That was all. So the story starts with problem Denouement Jim smiles , puts present away , and they have The dinner. The narrator Says they are the magi

There are many themes encounter in this story. First's: Marriage its commonly defined As partnership between husband wife and how they shared economies and emotion Second : poverty that there are many expression in the story “the shabby little couch “ “an electric button from which no mortal finger could coax a ring” ”the worn red carpet “ “She saves pennies ““shabby hat and shabby brown jacket” Sacrifice: that Della sells her hair (part of her body) to buy watch chain for Jim and he does The same sacrifice he sells his heirloom watch to buy combs hair

Analyze We have some aesthetics values in the l text : Simile: like truant school boy l Metaphor: Mrs. sofroine is lifting the mass l With practice hand (that show she is not l good) The most important thing in this story is l the irony We have dramatic and situation irony(Jim l situation and their gifts are useless

Next Style : breaking rule of grammar , and l depending on latter sentence to understand the previous sentence Foreshadowing : Know , there were two l possession of James Dillingham Intertextuility : the Magi and the king l Solomon and Sheba Queen

Conflict The conflict can be external and internal in this story internal: when she was thinking all the time how to Bring money , and crying then when she sells her hair and Thinks about thr reaction of her husband , and she will became ugly on his eyes e. g. ’ External : the dialogue between Della and Sofronie(hair shop) , and Between her , and her husband when they bring present to each other