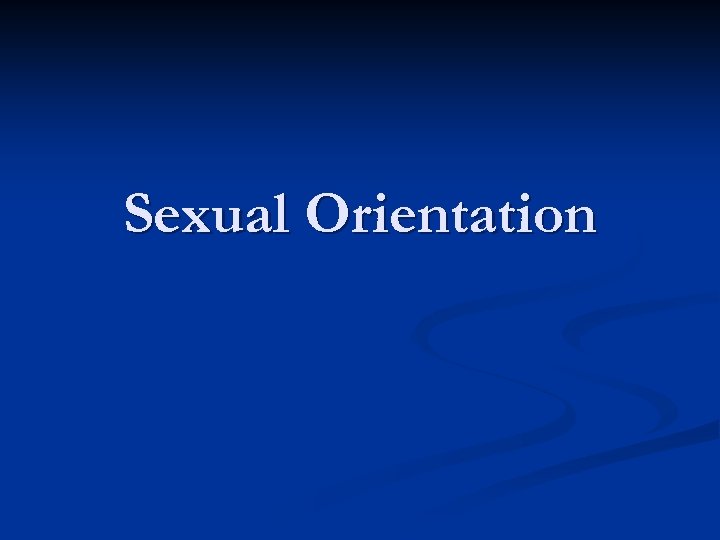 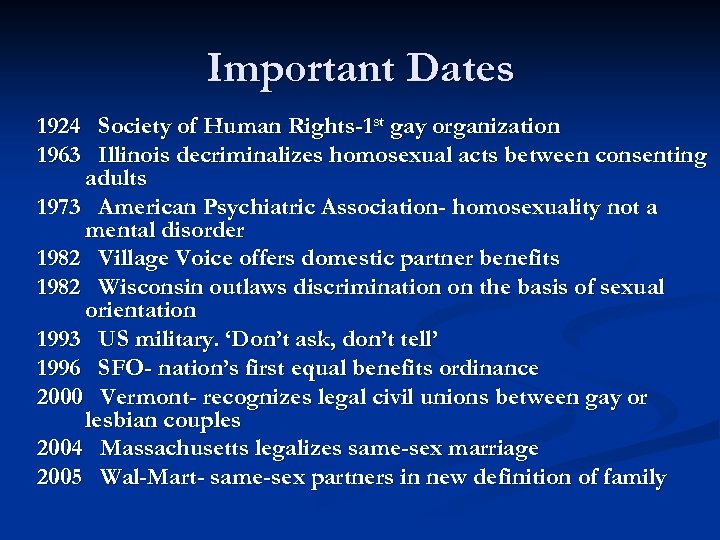 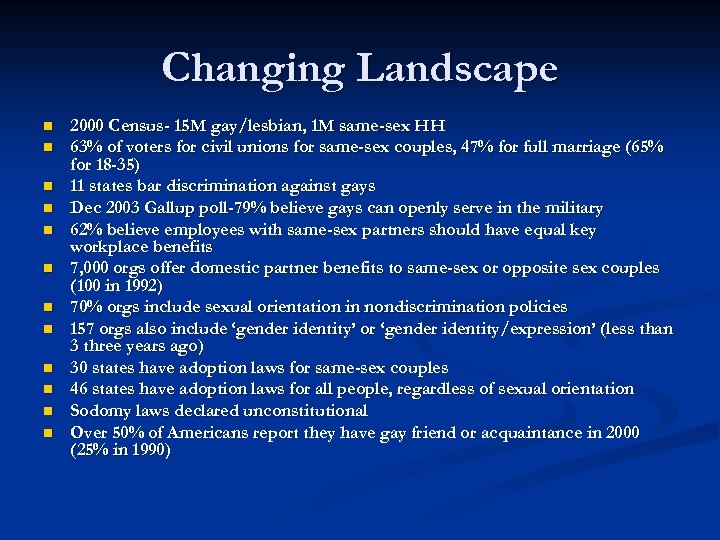 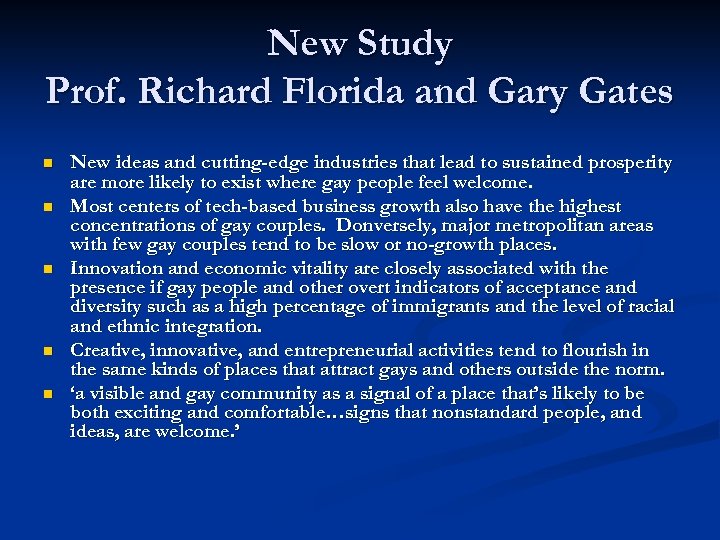 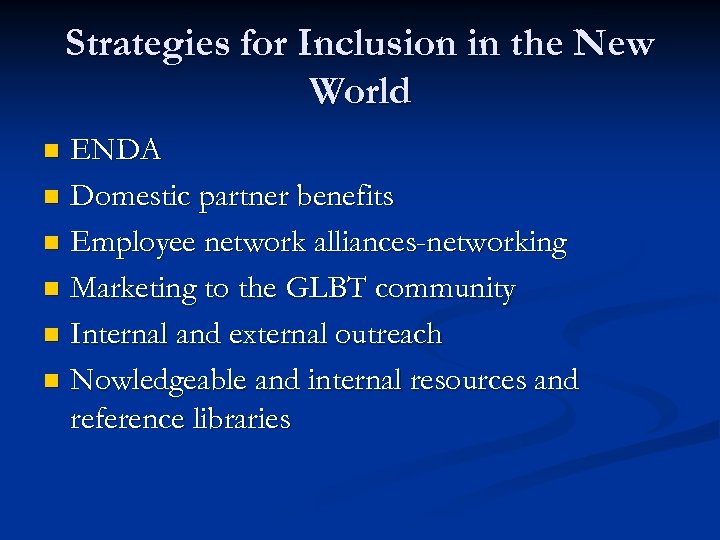 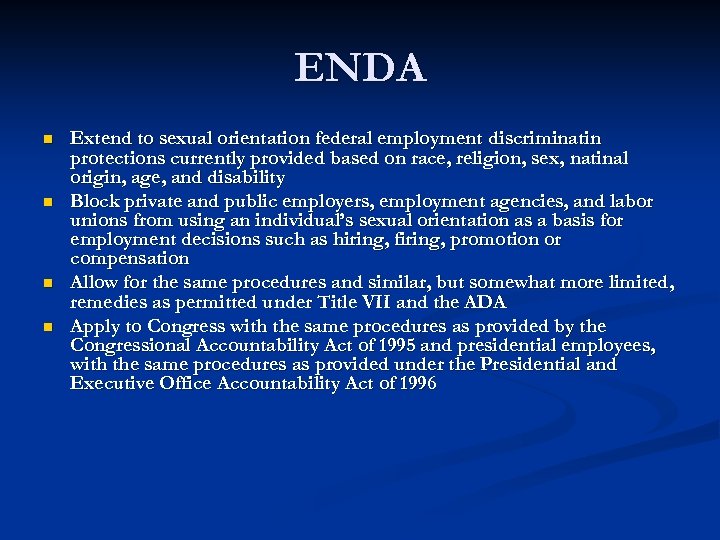 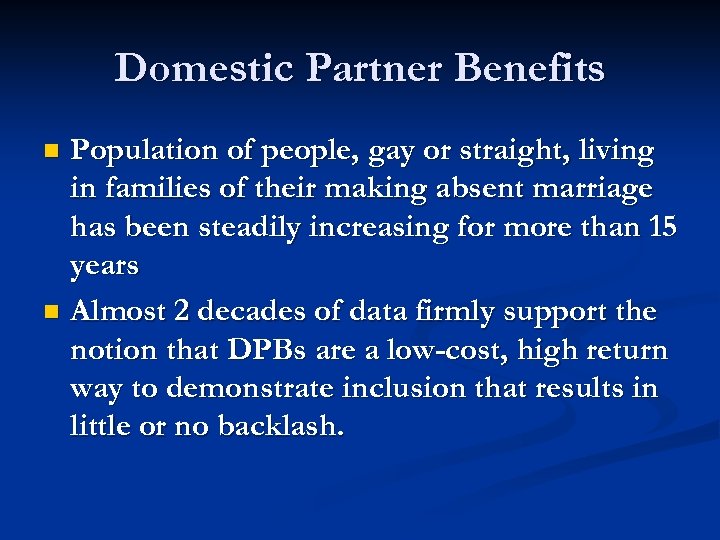 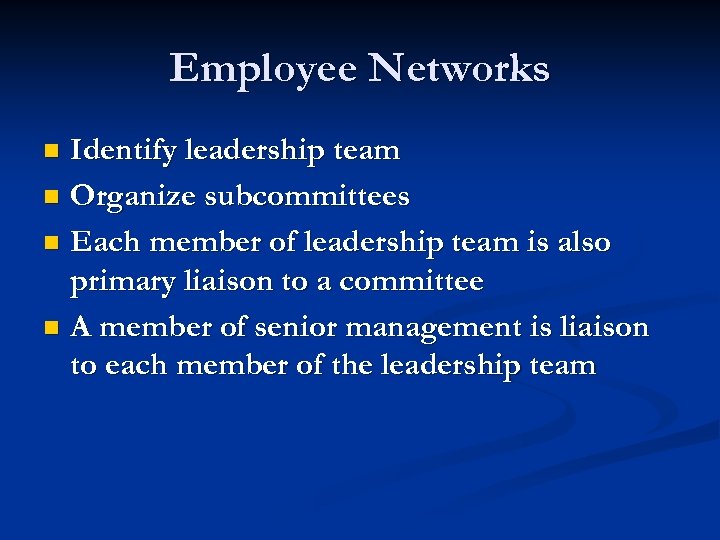 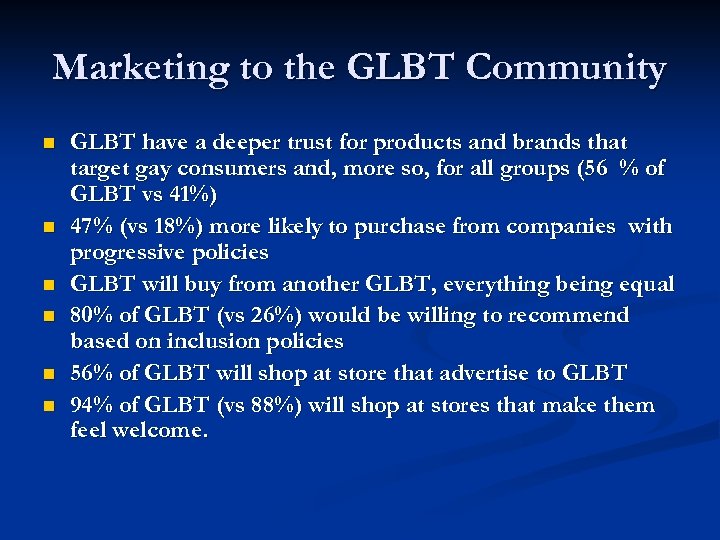 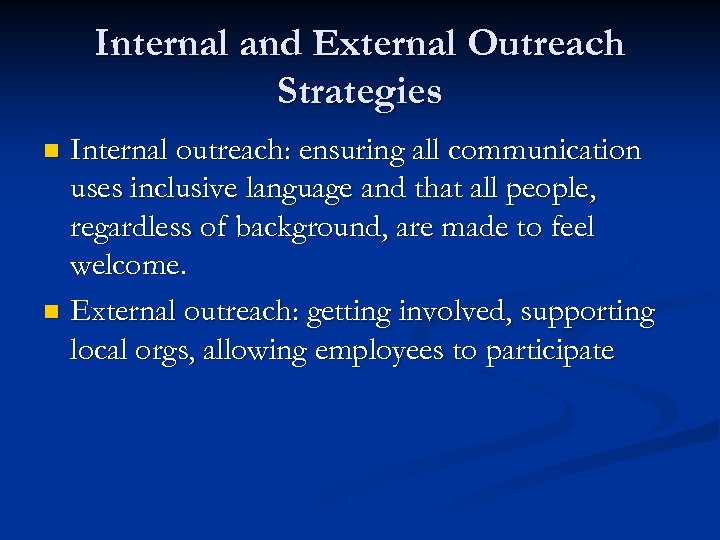 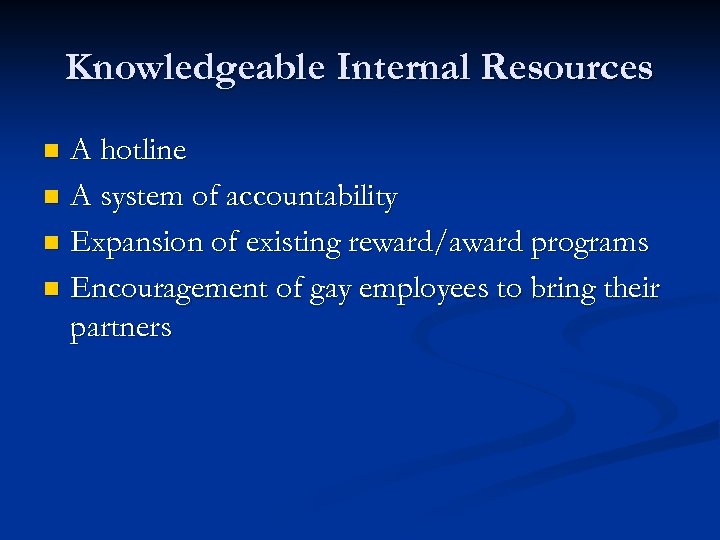 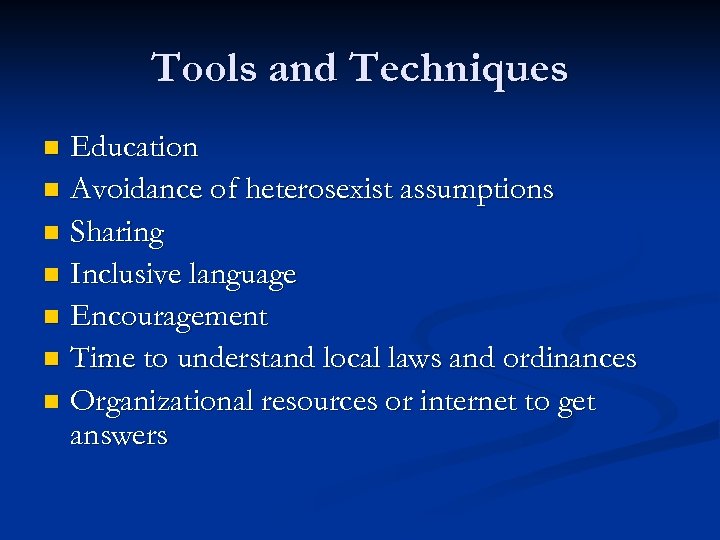 Changing Landscape n n n 2000 Census- 15 M gay/lesbian, 1 M same-sex HH 63% of voters for civil unions for same-sex couples, 47% for full marriage (65% for 18 -35) 11 states bar discrimination against gays Dec 2003 Gallup poll-79% believe gays can openly serve in the military 62% believe employees with same-sex partners should have equal key workplace benefits 7, 000 orgs offer domestic partner benefits to same-sex or opposite sex couples (100 in 1992) 70% orgs include sexual orientation in nondiscrimination policies 157 orgs also include ‘gender identity’ or ‘gender identity/expression’ (less than 3 three years ago) 30 states have adoption laws for same-sex couples 46 states have adoption laws for all people, regardless of sexual orientation Sodomy laws declared unconstitutional Over 50% of Americans report they have gay friend or acquaintance in 2000 (25% in 1990)

New Study Prof. Richard Florida and Gary Gates n n n New ideas and cutting-edge industries that lead to sustained prosperity are more likely to exist where gay people feel welcome. Most centers of tech-based business growth also have the highest concentrations of gay couples. Donversely, major metropolitan areas with few gay couples tend to be slow or no-growth places. Innovation and economic vitality are closely associated with the presence if gay people and other overt indicators of acceptance and diversity such as a high percentage of immigrants and the level of racial and ethnic integration. Creative, innovative, and entrepreneurial activities tend to flourish in the same kinds of places that attract gays and others outside the norm. ‘a visible and gay community as a signal of a place that’s likely to be both exciting and comfortable…signs that nonstandard people, and ideas, are welcome. ’

ENDA n n Extend to sexual orientation federal employment discriminatin protections currently provided based on race, religion, sex, natinal origin, age, and disability Block private and public employers, employment agencies, and labor unions from using an individual’s sexual orientation as a basis for employment decisions such as hiring, firing, promotion or compensation Allow for the same procedures and similar, but somewhat more limited, remedies as permitted under Title VII and the ADA Apply to Congress with the same procedures as provided by the Congressional Accountability Act of 1995 and presidential employees, with the same procedures as provided under the Presidential and Executive Office Accountability Act of 1996

Domestic Partner Benefits Population of people, gay or straight, living in families of their making absent marriage has been steadily increasing for more than 15 years n Almost 2 decades of data firmly support the notion that DPBs are a low-cost, high return way to demonstrate inclusion that results in little or no backlash. n

Marketing to the GLBT Community n n n GLBT have a deeper trust for products and brands that target gay consumers and, more so, for all groups (56 % of GLBT vs 41%) 47% (vs 18%) more likely to purchase from companies with progressive policies GLBT will buy from another GLBT, everything being equal 80% of GLBT (vs 26%) would be willing to recommend based on inclusion policies 56% of GLBT will shop at store that advertise to GLBT 94% of GLBT (vs 88%) will shop at stores that make them feel welcome.

Internal and External Outreach Strategies Internal outreach: ensuring all communication uses inclusive language and that all people, regardless of background, are made to feel welcome. n External outreach: getting involved, supporting local orgs, allowing employees to participate n