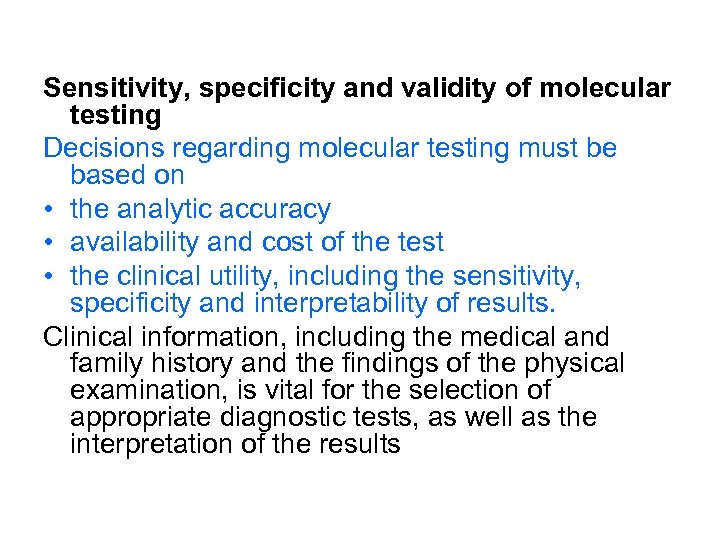 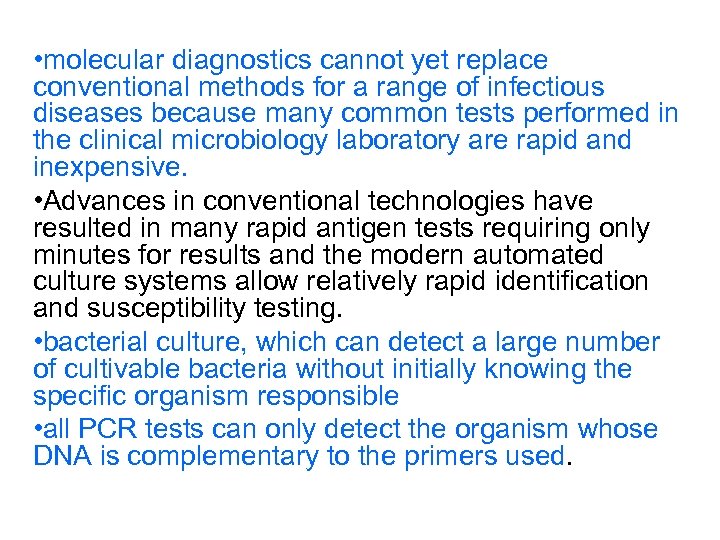 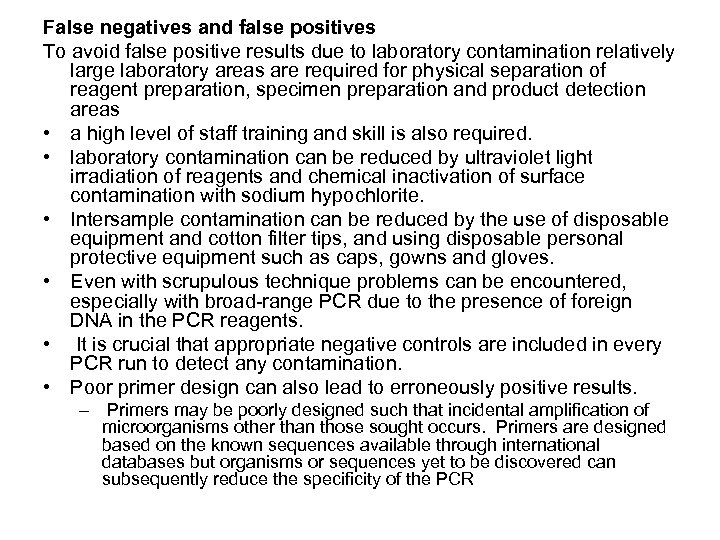 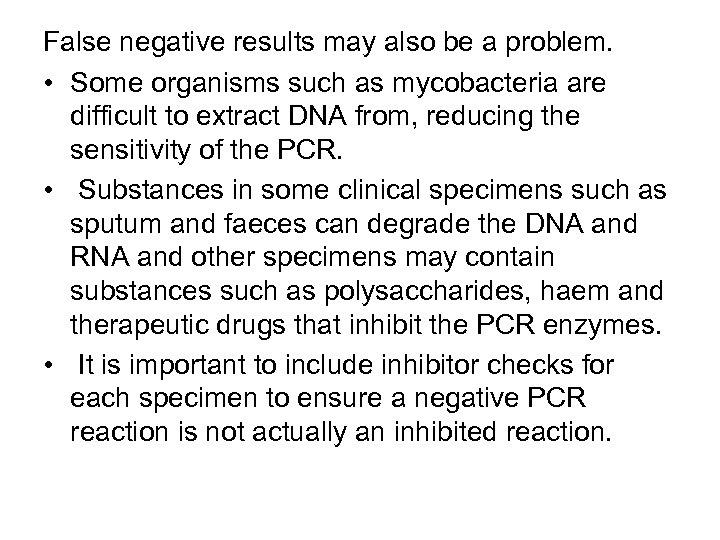 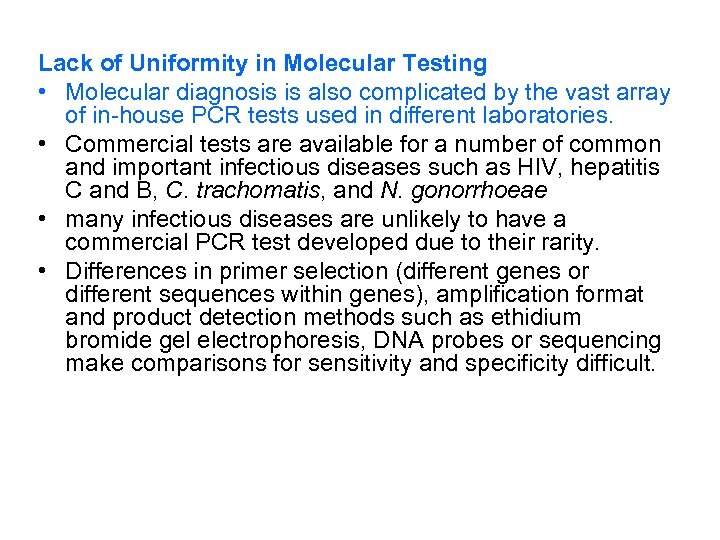 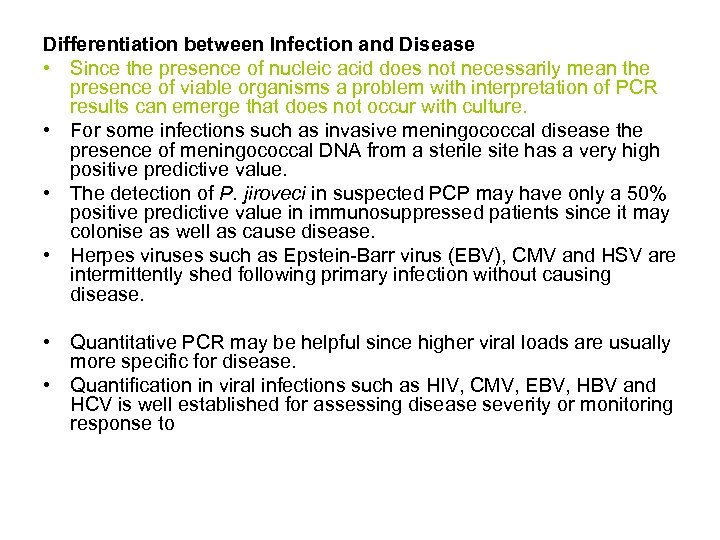 Sensitivity, specificity and validity of molecular testing Decisions regarding molecular testing must be based on • the analytic accuracy • availability and cost of the test • the clinical utility, including the sensitivity, specificity and interpretability of results. Clinical information, including the medical and family history and the findings of the physical examination, is vital for the selection of appropriate diagnostic tests, as well as the interpretation of the results

• molecular diagnostics cannot yet replace conventional methods for a range of infectious diseases because many common tests performed in the clinical microbiology laboratory are rapid and inexpensive. • Advances in conventional technologies have resulted in many rapid antigen tests requiring only minutes for results and the modern automated culture systems allow relatively rapid identification and susceptibility testing. • bacterial culture, which can detect a large number of cultivable bacteria without initially knowing the specific organism responsible • all PCR tests can only detect the organism whose DNA is complementary to the primers used.

False negatives and false positives To avoid false positive results due to laboratory contamination relatively large laboratory areas are required for physical separation of reagent preparation, specimen preparation and product detection areas • a high level of staff training and skill is also required. • laboratory contamination can be reduced by ultraviolet light irradiation of reagents and chemical inactivation of surface contamination with sodium hypochlorite. • Intersample contamination can be reduced by the use of disposable equipment and cotton filter tips, and using disposable personal protective equipment such as caps, gowns and gloves. • Even with scrupulous technique problems can be encountered, especially with broad-range PCR due to the presence of foreign DNA in the PCR reagents. • It is crucial that appropriate negative controls are included in every PCR run to detect any contamination. • Poor primer design can also lead to erroneously positive results. – Primers may be poorly designed such that incidental amplification of microorganisms other than those sought occurs. Primers are designed based on the known sequences available through international databases but organisms or sequences yet to be discovered can subsequently reduce the specificity of the PCR

False negative results may also be a problem. • Some organisms such as mycobacteria are difficult to extract DNA from, reducing the sensitivity of the PCR. • Substances in some clinical specimens such as sputum and faeces can degrade the DNA and RNA and other specimens may contain substances such as polysaccharides, haem and therapeutic drugs that inhibit the PCR enzymes. • It is important to include inhibitor checks for each specimen to ensure a negative PCR reaction is not actually an inhibited reaction.

Lack of Uniformity in Molecular Testing • Molecular diagnosis is also complicated by the vast array of in-house PCR tests used in different laboratories. • Commercial tests are available for a number of common and important infectious diseases such as HIV, hepatitis C and B, C. trachomatis, and N. gonorrhoeae • many infectious diseases are unlikely to have a commercial PCR test developed due to their rarity. • Differences in primer selection (different genes or different sequences within genes), amplification format and product detection methods such as ethidium bromide gel electrophoresis, DNA probes or sequencing make comparisons for sensitivity and specificity difficult.

Differentiation between Infection and Disease • Since the presence of nucleic acid does not necessarily mean the presence of viable organisms a problem with interpretation of PCR results can emerge that does not occur with culture. • For some infections such as invasive meningococcal disease the presence of meningococcal DNA from a sterile site has a very high positive predictive value. • The detection of P. jiroveci in suspected PCP may have only a 50% positive predictive value in immunosuppressed patients since it may colonise as well as cause disease. • Herpes viruses such as Epstein-Barr virus (EBV), CMV and HSV are intermittently shed following primary infection without causing disease. • Quantitative PCR may be helpful since higher viral loads are usually more specific for disease. • Quantification in viral infections such as HIV, CMV, EBV, HBV and HCV is well established for assessing disease severity or monitoring response to