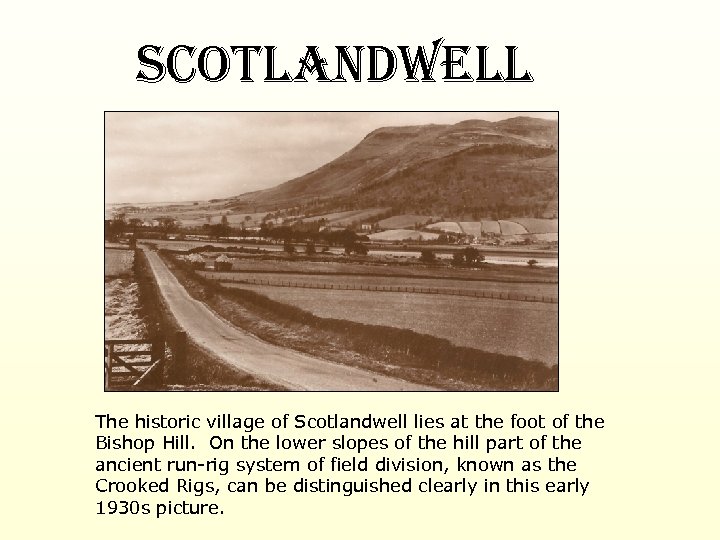 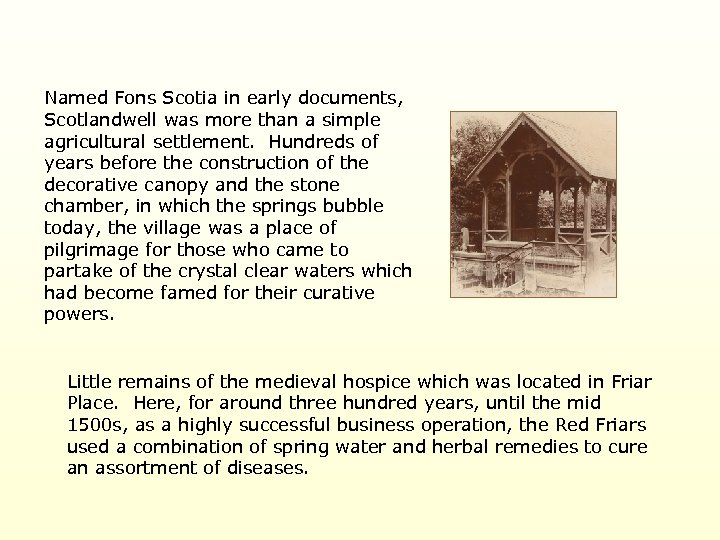 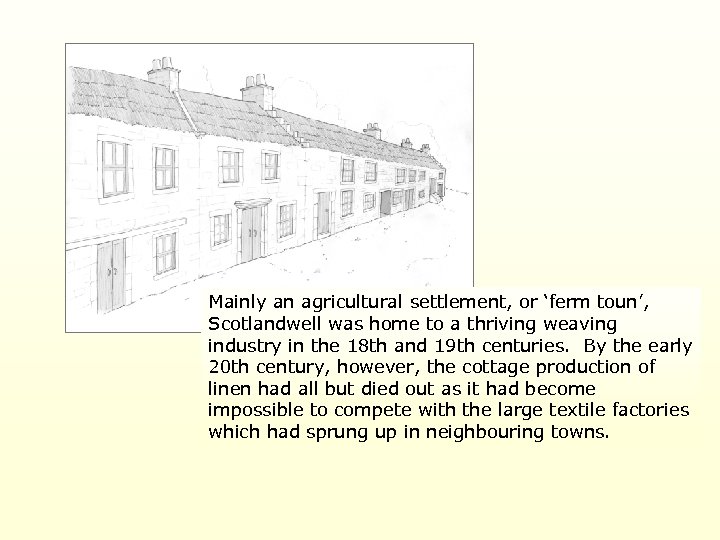 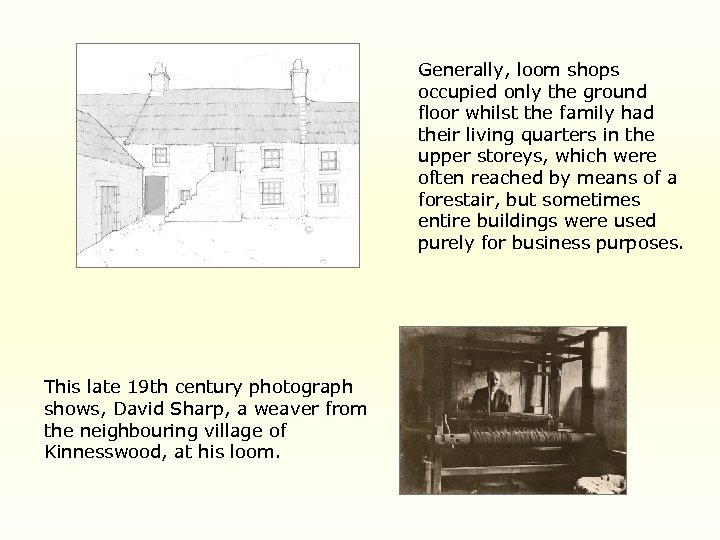 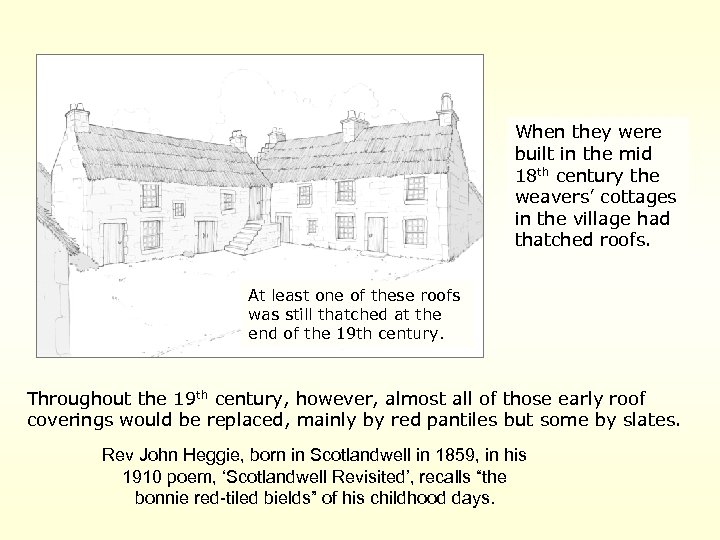 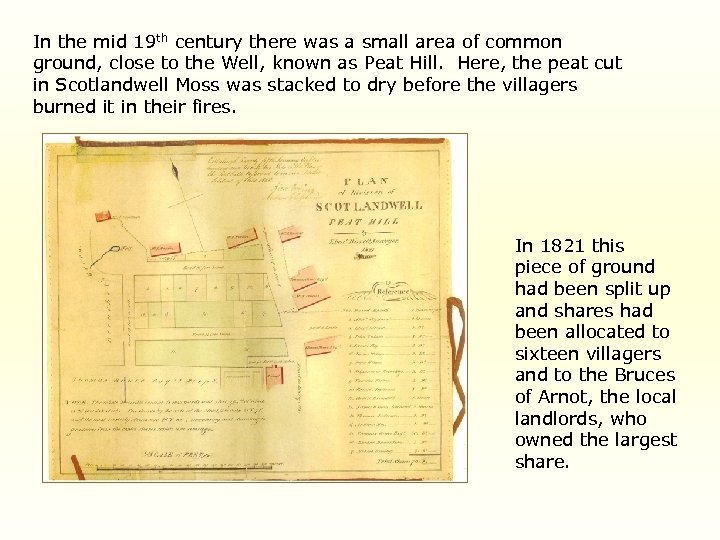 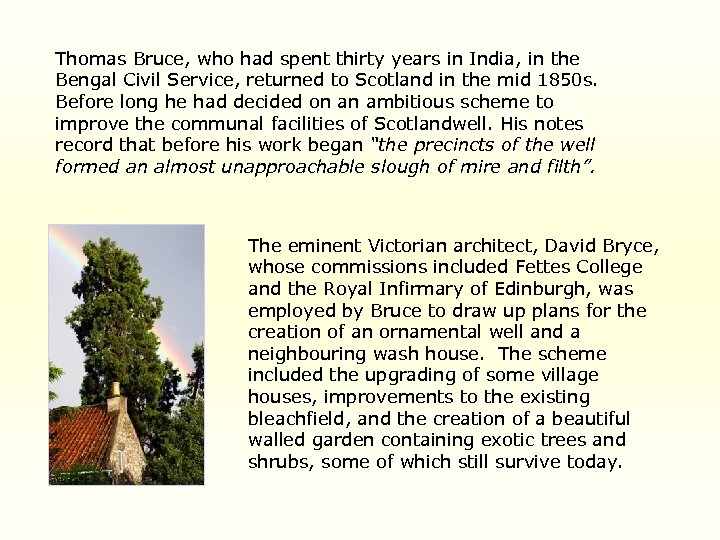 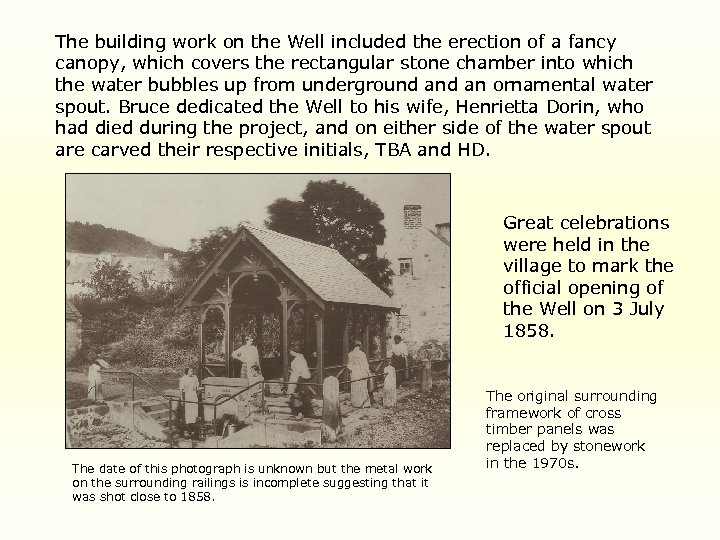 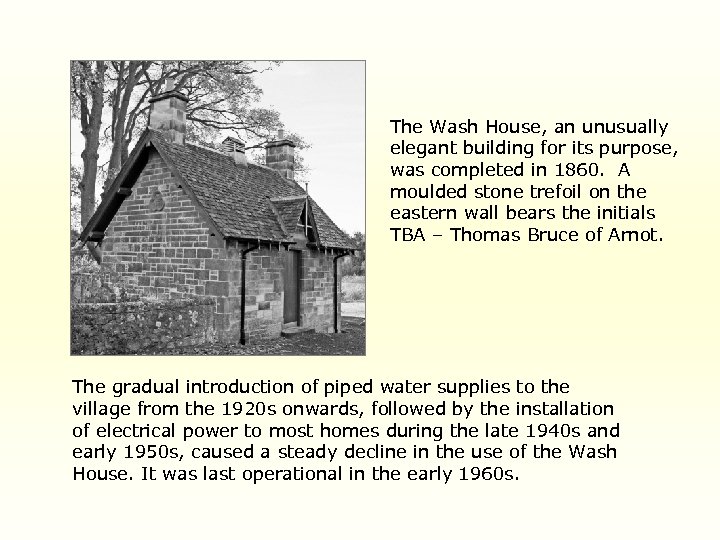 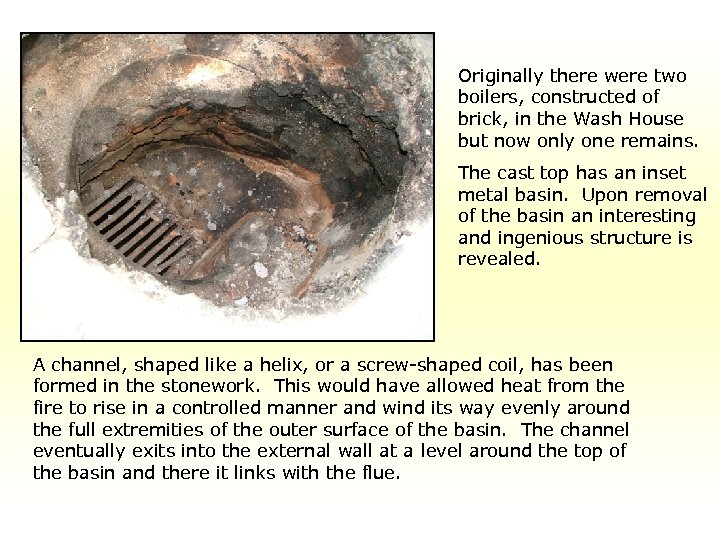 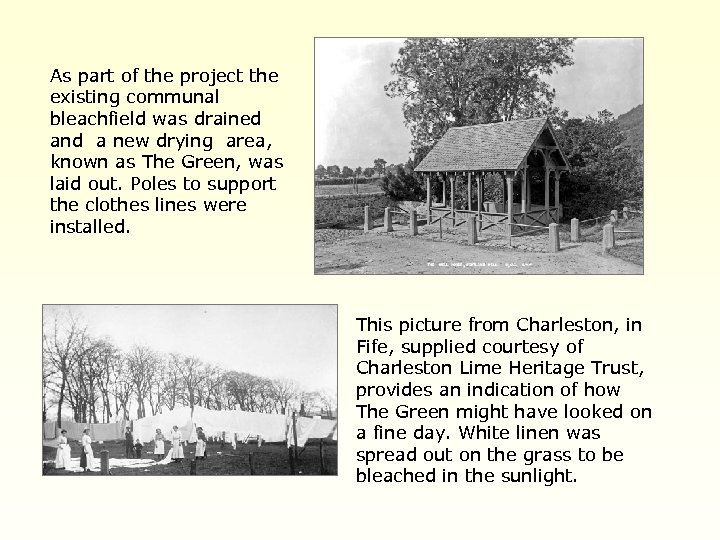 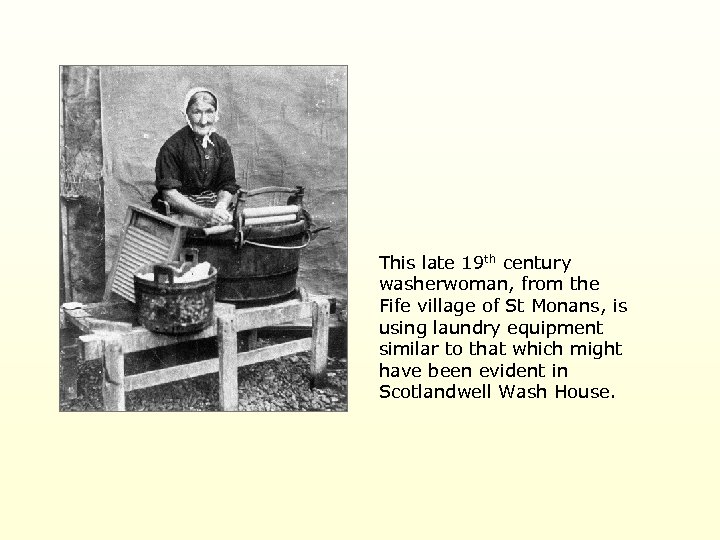 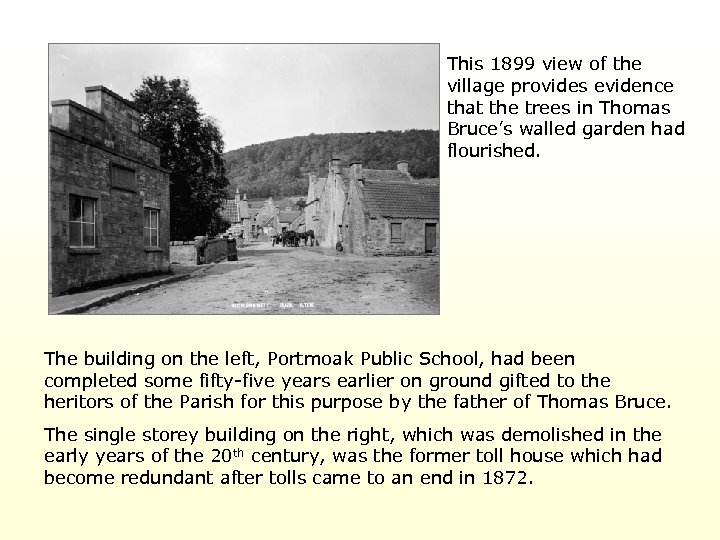 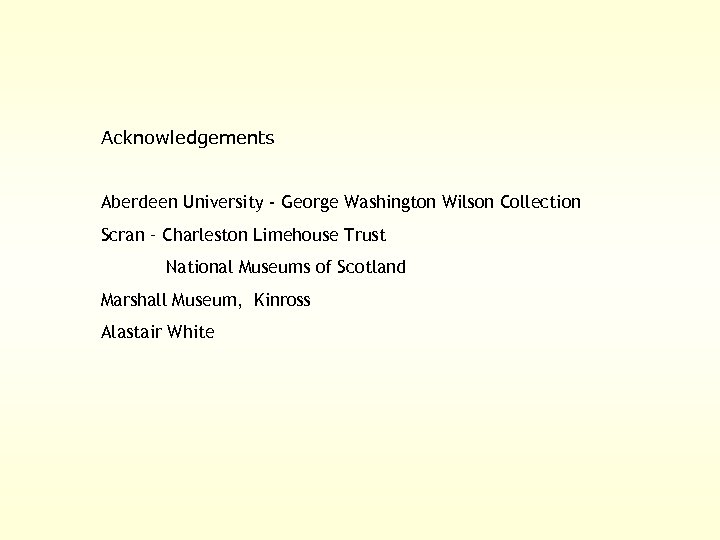 SCOTLANDWELL The historic village of Scotlandwell lies at the foot of the Bishop Hill. On the lower slopes of the hill part of the ancient run-rig system of field division, known as the Crooked Rigs, can be distinguished clearly in this early 1930 s picture.

Named Fons Scotia in early documents, Scotlandwell was more than a simple agricultural settlement. Hundreds of years before the construction of the decorative canopy and the stone chamber, in which the springs bubble today, the village was a place of pilgrimage for those who came to partake of the crystal clear waters which had become famed for their curative powers. Little remains of the medieval hospice which was located in Friar Place. Here, for around three hundred years, until the mid 1500 s, as a highly successful business operation, the Red Friars used a combination of spring water and herbal remedies to cure an assortment of diseases.

Mainly an agricultural settlement, or ‘ferm toun’, Scotlandwell was home to a thriving weaving industry in the 18 th and 19 th centuries. By the early 20 th century, however, the cottage production of linen had all but died out as it had become impossible to compete with the large textile factories which had sprung up in neighbouring towns.

Generally, loom shops occupied only the ground floor whilst the family had their living quarters in the upper storeys, which were often reached by means of a forestair, but sometimes entire buildings were used purely for business purposes. This late 19 th century photograph shows, David Sharp, a weaver from the neighbouring village of Kinnesswood, at his loom.

When they were built in the mid 18 th century the weavers’ cottages in the village had thatched roofs. At least one of these roofs was still thatched at the end of the 19 th century. Throughout the 19 th century, however, almost all of those early roof coverings would be replaced, mainly by red pantiles but some by slates. Rev John Heggie, born in Scotlandwell in 1859, in his 1910 poem, ‘Scotlandwell Revisited’, recalls “the bonnie red-tiled bields” of his childhood days.

In the mid 19 th century there was a small area of common ground, close to the Well, known as Peat Hill. Here, the peat cut in Scotlandwell Moss was stacked to dry before the villagers burned it in their fires. In 1821 this piece of ground had been split up and shares had been allocated to sixteen villagers and to the Bruces of Arnot, the local landlords, who owned the largest share.

Thomas Bruce, who had spent thirty years in India, in the Bengal Civil Service, returned to Scotland in the mid 1850 s. Before long he had decided on an ambitious scheme to improve the communal facilities of Scotlandwell. His notes record that before his work began “the precincts of the well formed an almost unapproachable slough of mire and filth”. The eminent Victorian architect, David Bryce, whose commissions included Fettes College and the Royal Infirmary of Edinburgh, was employed by Bruce to draw up plans for the creation of an ornamental well and a neighbouring wash house. The scheme included the upgrading of some village houses, improvements to the existing bleachfield, and the creation of a beautiful walled garden containing exotic trees and shrubs, some of which still survive today.

The building work on the Well included the erection of a fancy canopy, which covers the rectangular stone chamber into which the water bubbles up from underground an ornamental water spout. Bruce dedicated the Well to his wife, Henrietta Dorin, who had died during the project, and on either side of the water spout are carved their respective initials, TBA and HD. Great celebrations were held in the village to mark the official opening of the Well on 3 July 1858. The date of this photograph is unknown but the metal work on the surrounding railings is incomplete suggesting that it was shot close to 1858. The original surrounding framework of cross timber panels was replaced by stonework in the 1970 s.

The Wash House, an unusually elegant building for its purpose, was completed in 1860. A moulded stone trefoil on the eastern wall bears the initials TBA – Thomas Bruce of Arnot. The gradual introduction of piped water supplies to the village from the 1920 s onwards, followed by the installation of electrical power to most homes during the late 1940 s and early 1950 s, caused a steady decline in the use of the Wash House. It was last operational in the early 1960 s.

Originally there were two boilers, constructed of brick, in the Wash House but now only one remains. The cast top has an inset metal basin. Upon removal of the basin an interesting and ingenious structure is revealed. A channel, shaped like a helix, or a screw-shaped coil, has been formed in the stonework. This would have allowed heat from the fire to rise in a controlled manner and wind its way evenly around the full extremities of the outer surface of the basin. The channel eventually exits into the external wall at a level around the top of the basin and there it links with the flue.

As part of the project the existing communal bleachfield was drained and a new drying area, known as The Green, was laid out. Poles to support the clothes lines were installed. This picture from Charleston, in Fife, supplied courtesy of Charleston Lime Heritage Trust, provides an indication of how The Green might have looked on a fine day. White linen was spread out on the grass to be bleached in the sunlight.

This late 19 th century washerwoman, from the Fife village of St Monans, is using laundry equipment similar to that which might have been evident in Scotlandwell Wash House.

This 1899 view of the village provides evidence that the trees in Thomas Bruce’s walled garden had flourished. The building on the left, Portmoak Public School, had been completed some fifty-five years earlier on ground gifted to the heritors of the Parish for this purpose by the father of Thomas Bruce. The single storey building on the right, which was demolished in the early years of the 20 th century, was the former toll house which had become redundant after tolls came to an end in 1872.