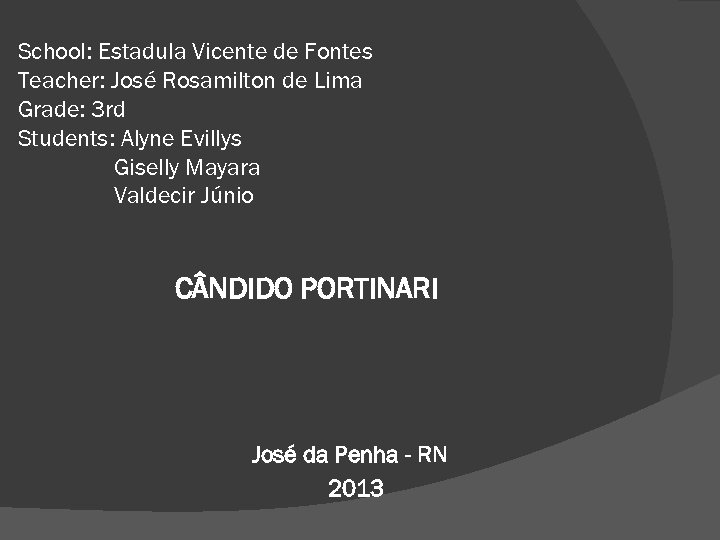 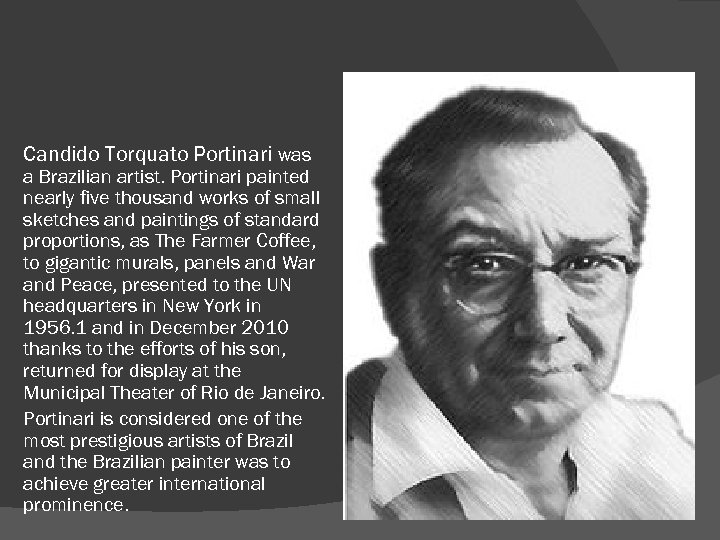 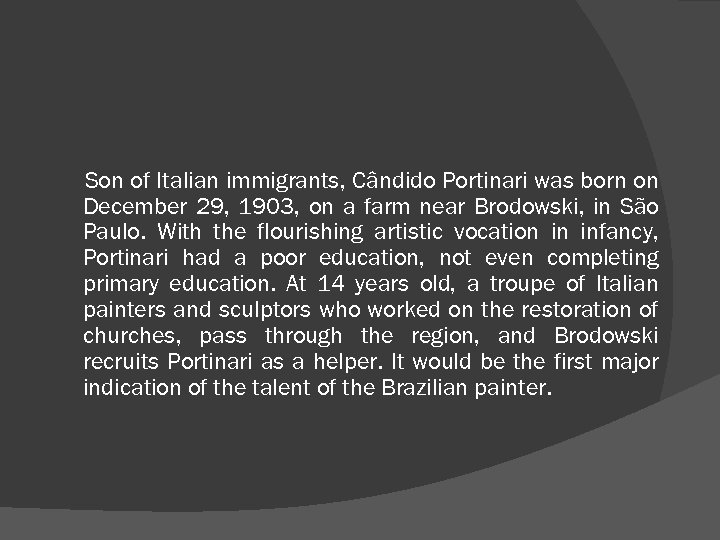 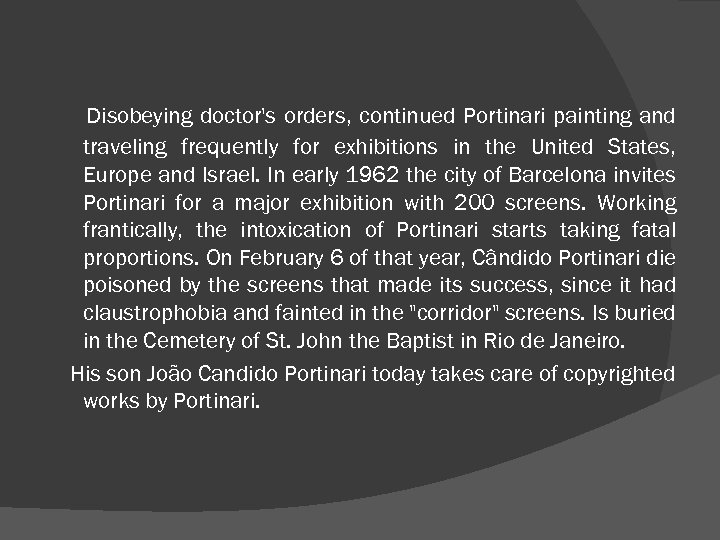 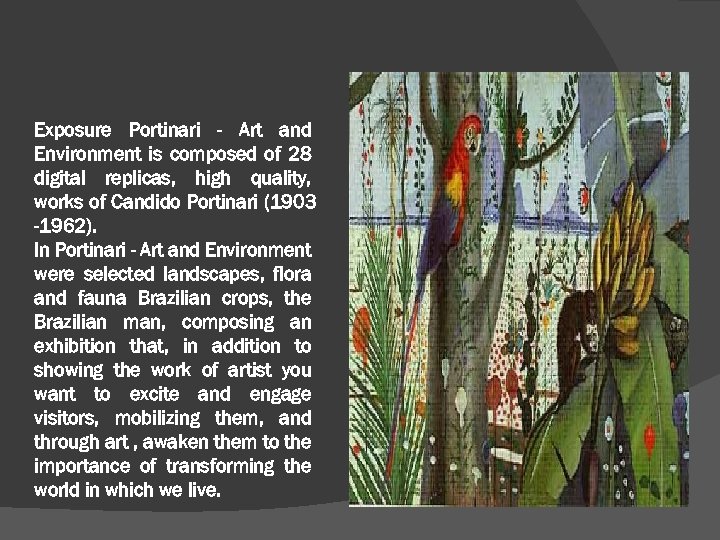 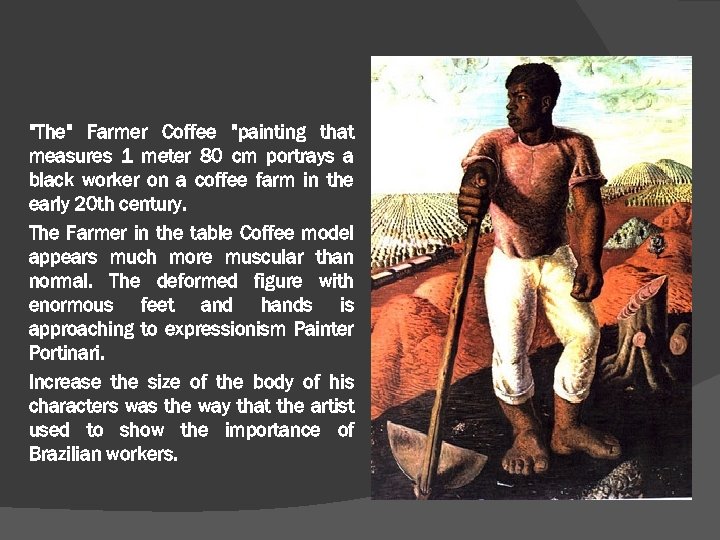 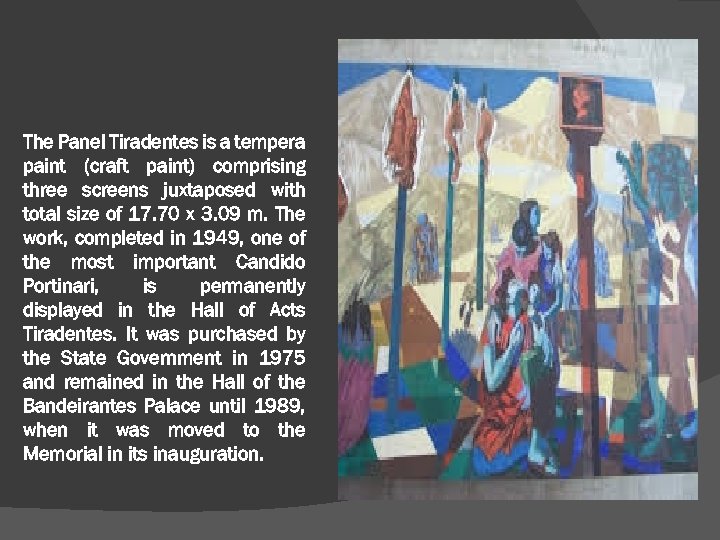 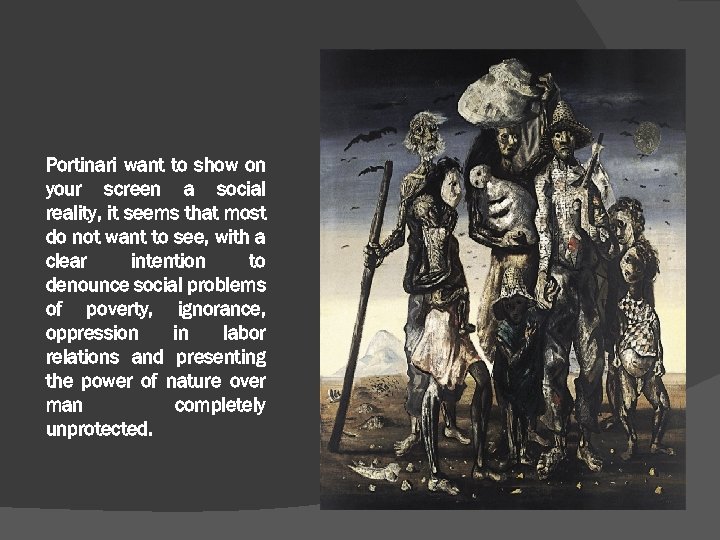 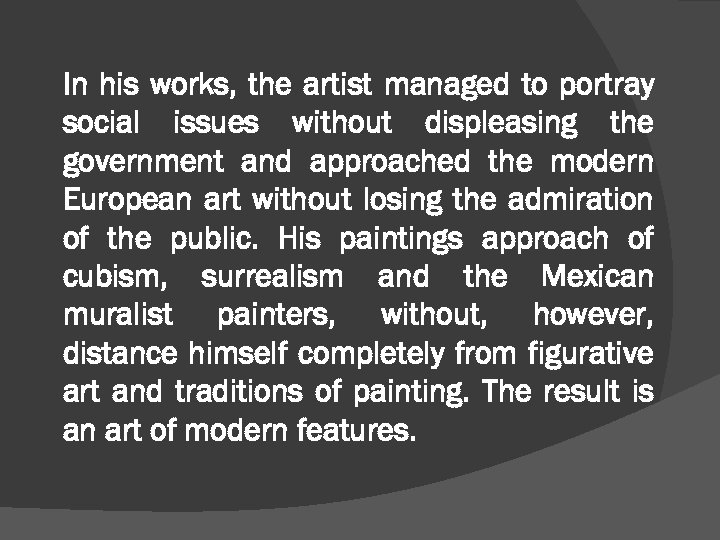 Candido Torquato Portinari was a Brazilian artist. Portinari painted nearly five thousand works of small sketches and paintings of standard proportions, as The Farmer Coffee, to gigantic murals, panels and War and Peace, presented to the UN headquarters in New York in 1956. 1 and in December 2010 thanks to the efforts of his son, returned for display at the Municipal Theater of Rio de Janeiro. Portinari is considered one of the most prestigious artists of Brazil and the Brazilian painter was to achieve greater international prominence.

Son of Italian immigrants, Cândido Portinari was born on December 29, 1903, on a farm near Brodowski, in São Paulo. With the flourishing artistic vocation in infancy, Portinari had a poor education, not even completing primary education. At 14 years old, a troupe of Italian painters and sculptors who worked on the restoration of churches, pass through the region, and Brodowski recruits Portinari as a helper. It would be the first major indication of the talent of the Brazilian painter.

Disobeying doctor's orders, continued Portinari painting and traveling frequently for exhibitions in the United States, Europe and Israel. In early 1962 the city of Barcelona invites Portinari for a major exhibition with 200 screens. Working frantically, the intoxication of Portinari starts taking fatal proportions. On February 6 of that year, Cândido Portinari die poisoned by the screens that made its success, since it had claustrophobia and fainted in the "corridor" screens. Is buried in the Cemetery of St. John the Baptist in Rio de Janeiro. His son João Candido Portinari today takes care of copyrighted works by Portinari.

Exposure Portinari - Art and Environment is composed of 28 digital replicas, high quality, works of Candido Portinari (1903 -1962). In Portinari - Art and Environment were selected landscapes, flora and fauna Brazilian crops, the Brazilian man, composing an exhibition that, in addition to showing the work of artist you want to excite and engage visitors, mobilizing them, and through art , awaken them to the importance of transforming the world in which we live.

"The" Farmer Coffee "painting that measures 1 meter 80 cm portrays a black worker on a coffee farm in the early 20 th century. The Farmer in the table Coffee model appears much more muscular than normal. The deformed figure with enormous feet and hands is approaching to expressionism Painter Portinari. Increase the size of the body of his characters was the way that the artist used to show the importance of Brazilian workers.

The Panel Tiradentes is a tempera paint (craft paint) comprising three screens juxtaposed with total size of 17. 70 x 3. 09 m. The work, completed in 1949, one of the most important Candido Portinari, is permanently displayed in the Hall of Acts Tiradentes. It was purchased by the State Government in 1975 and remained in the Hall of the Bandeirantes Palace until 1989, when it was moved to the Memorial in its inauguration.

Portinari want to show on your screen a social reality, it seems that most do not want to see, with a clear intention to denounce social problems of poverty, ignorance, oppression in labor relations and presenting the power of nature over man completely unprotected.

In his works, the artist managed to portray social issues without displeasing the government and approached the modern European art without losing the admiration of the public. His paintings approach of cubism, surrealism and the Mexican muralist painters, without, however, distance himself completely from figurative art and traditions of painting. The result is an art of modern features.