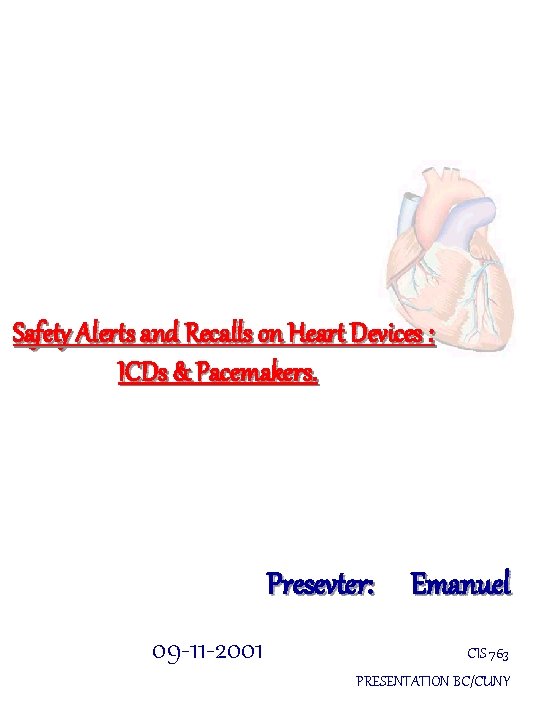 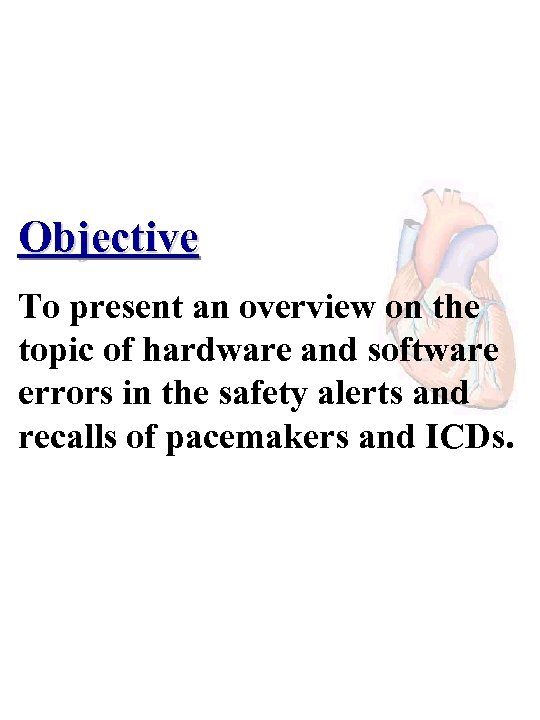 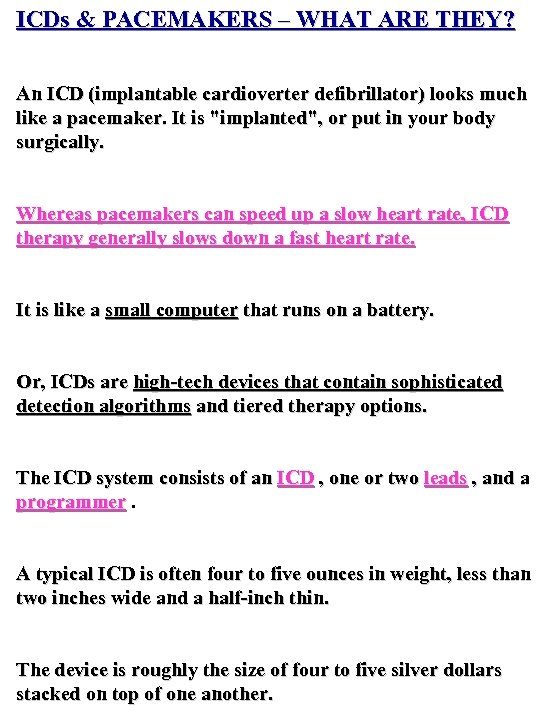 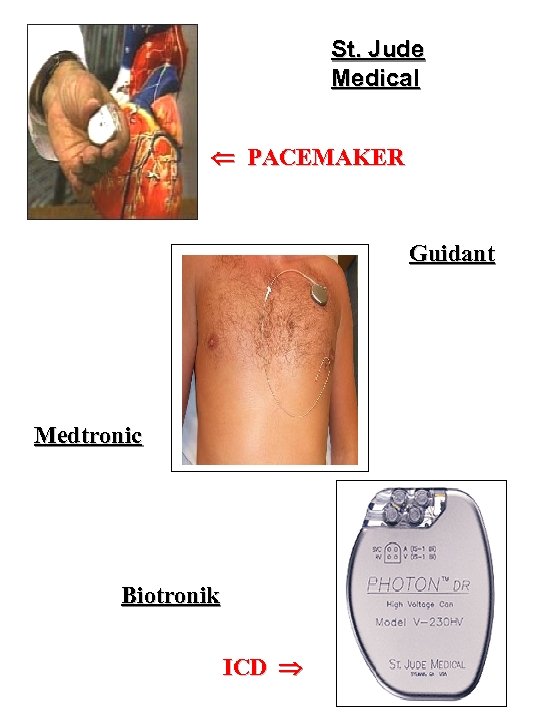 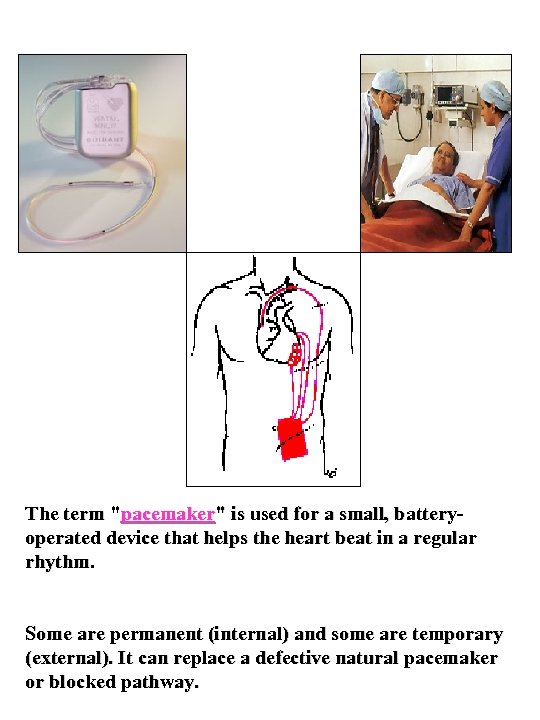 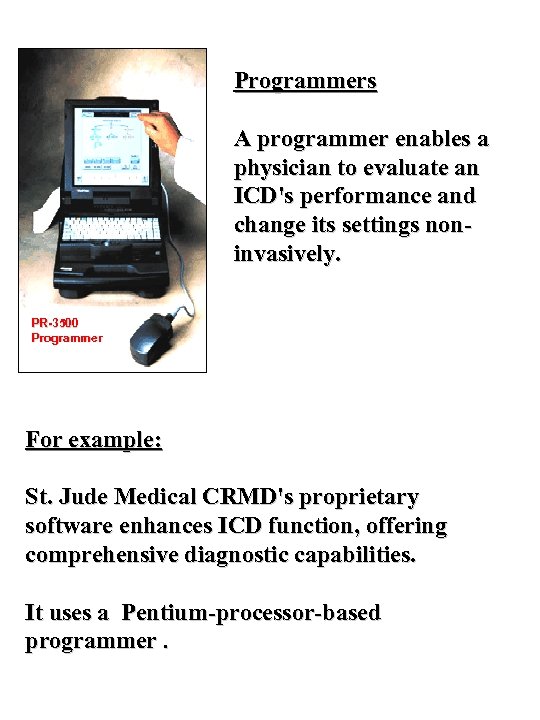 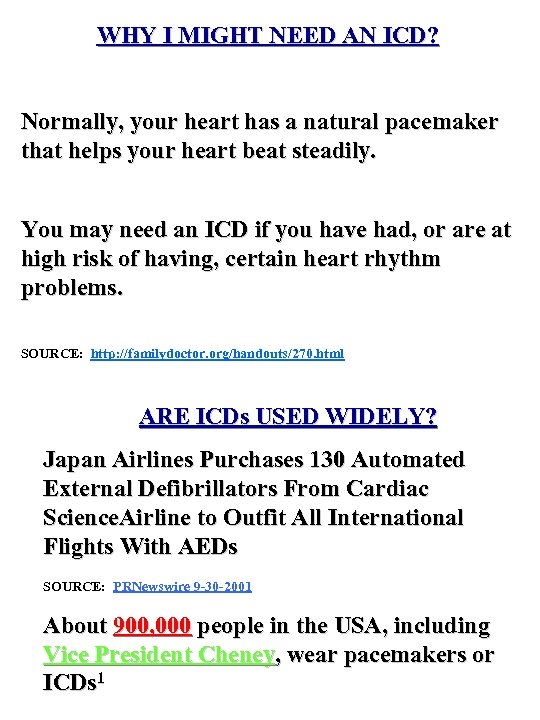 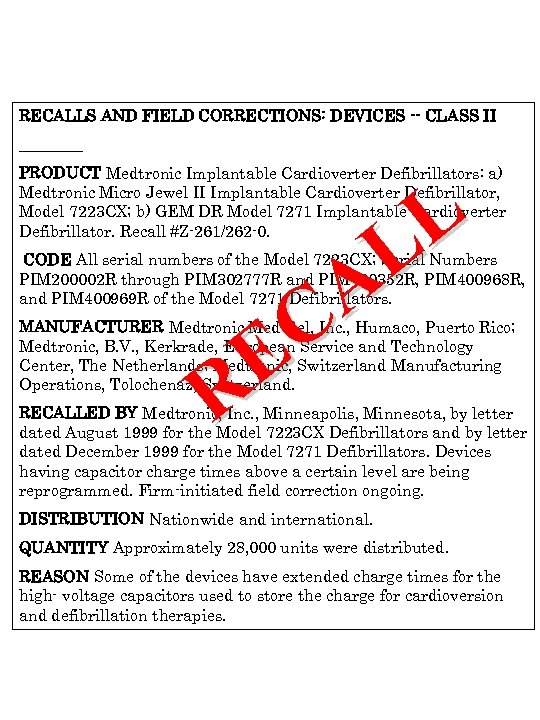 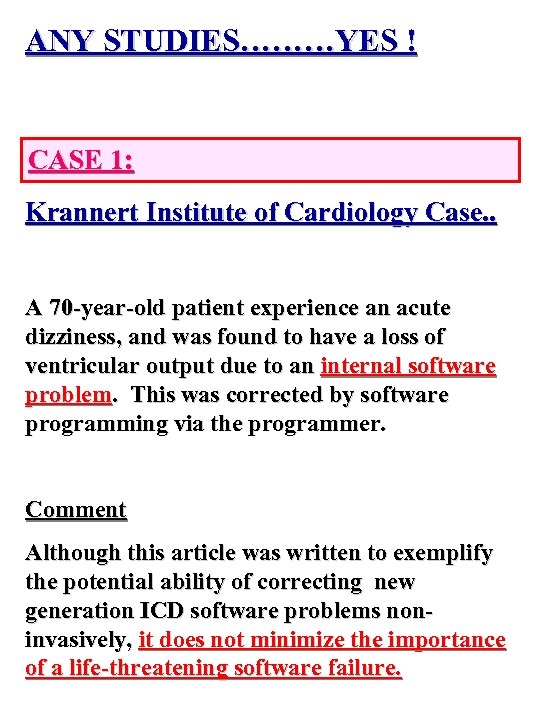 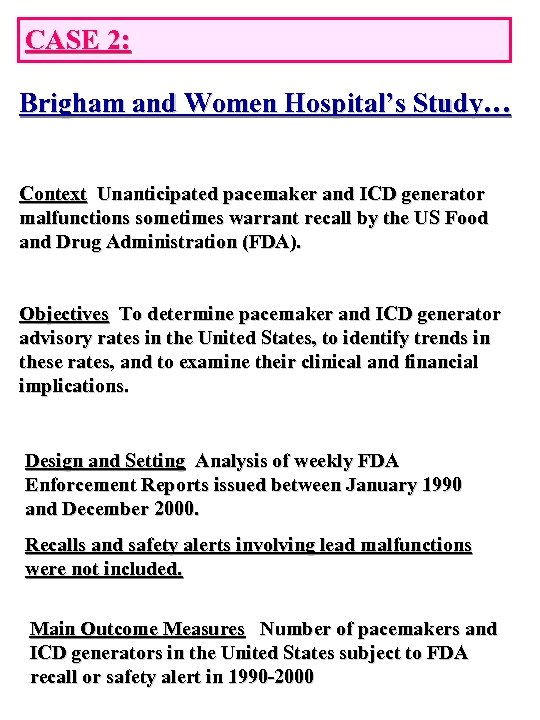 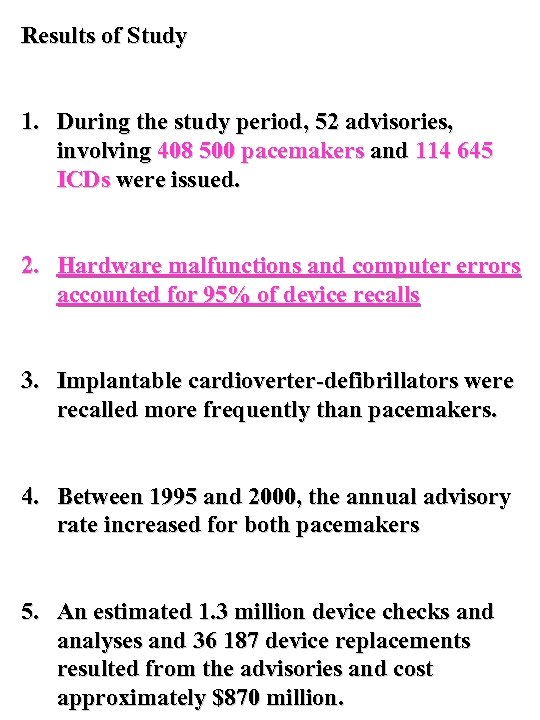 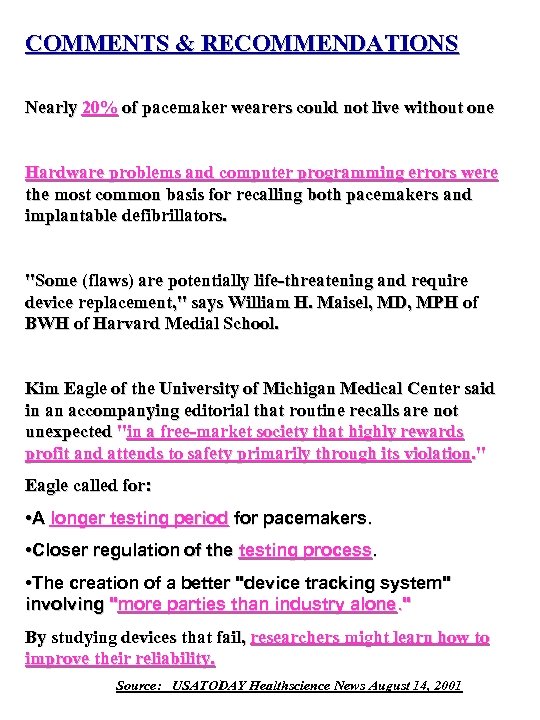 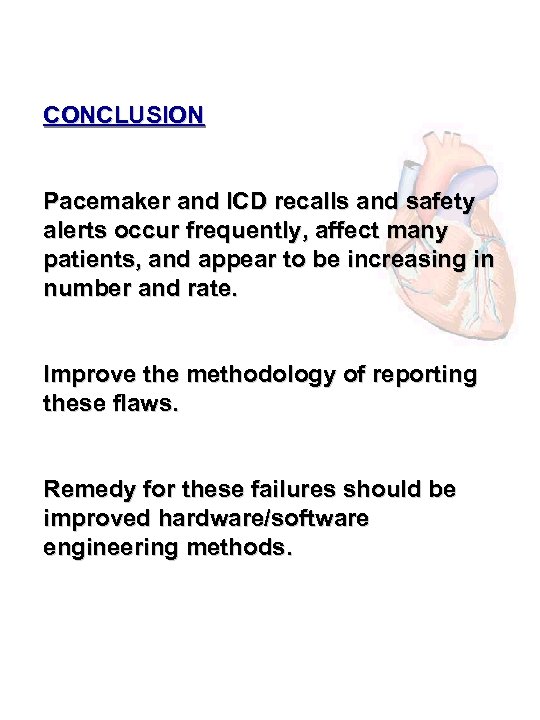 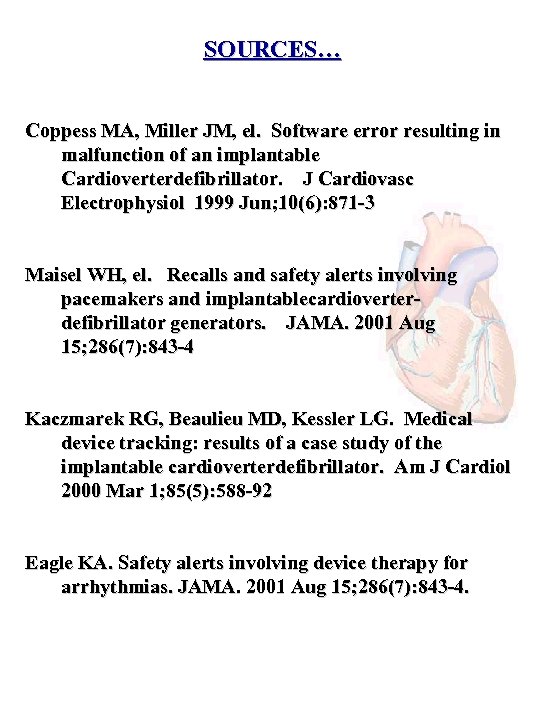 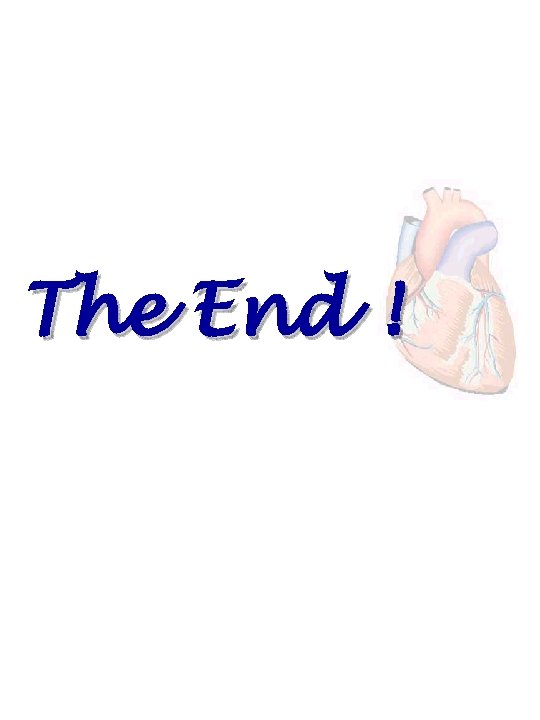 Objective To present an overview on the topic of hardware and software errors in the safety alerts and recalls of pacemakers and ICDs.

ICDs & PACEMAKERS – WHAT ARE THEY? An ICD (implantable cardioverter defibrillator) looks much like a pacemaker. It is "implanted", or put in your body surgically. Whereas pacemakers can speed up a slow heart rate, ICD therapy generally slows down a fast heart rate. It is like a small computer that runs on a battery. Or, ICDs are high-tech devices that contain sophisticated detection algorithms and tiered therapy options. The ICD system consists of an ICD , one or two leads , and a programmer. A typical ICD is often four to five ounces in weight, less than two inches wide and a half-inch thin. The device is roughly the size of four to five silver dollars stacked on top of one another.

The term "pacemaker" is used for a small, batteryoperated device that helps the heart beat in a regular rhythm. Some are permanent (internal) and some are temporary (external). It can replace a defective natural pacemaker or blocked pathway.

WHY I MIGHT NEED AN ICD? Normally, your heart has a natural pacemaker that helps your heart beat steadily. You may need an ICD if you have had, or are at high risk of having, certain heart rhythm problems. SOURCE: http: //familydoctor. org/handouts/270. html ARE ICDs USED WIDELY? Japan Airlines Purchases 130 Automated External Defibrillators From Cardiac Science. Airline to Outfit All International Flights With AEDs SOURCE: PRNewswire 9 -30 -2001 About 900, 000 people in the USA, including Vice President Cheney, wear pacemakers or ICDs 1

ANY STUDIES………YES ! CASE 1: Krannert Institute of Cardiology Case. . A 70 -year-old patient experience an acute dizziness, and was found to have a loss of ventricular output due to an internal software problem. This was corrected by software programming via the programmer. Comment Although this article was written to exemplify the potential ability of correcting new generation ICD software problems non- invasively, it does not minimize the importance of a life-threatening software failure.

CASE 2: Brigham and Women Hospital’s Study… Context Unanticipated pacemaker and ICD generator malfunctions sometimes warrant recall by the US Food and Drug Administration (FDA). Objectives To determine pacemaker and ICD generator advisory rates in the United States, to identify trends in these rates, and to examine their clinical and financial implications. Design and Setting Analysis of weekly FDA Enforcement Reports issued between January 1990 and December 2000. Recalls and safety alerts involving lead malfunctions were not included. Main Outcome Measures Number of pacemakers and ICD generators in the United States subject to FDA recall or safety alert in 1990 -2000

Results of Study 1. During the study period, 52 advisories, involving 408 500 pacemakers and 114 645 ICDs were issued. 2. Hardware malfunctions and computer errors accounted for 95% of device recalls 3. Implantable cardioverter-defibrillators were recalled more frequently than pacemakers. 4. Between 1995 and 2000, the annual advisory rate increased for both pacemakers 5. An estimated 1. 3 million device checks and analyses and 36 187 device replacements resulted from the advisories and cost approximately $870 million.

COMMENTS & RECOMMENDATIONS Nearly 20% of pacemaker wearers could not live without one Hardware problems and computer programming errors were the most common basis for recalling both pacemakers and implantable defibrillators. "Some (flaws) are potentially life-threatening and require device replacement, " says William H. Maisel, MD, MPH of BWH of Harvard Medial School. Kim Eagle of the University of Michigan Medical Center said in an accompanying editorial that routine recalls are not unexpected "in a free-market society that highly rewards profit and attends to safety primarily through its violation. " Eagle called for: • A longer testing period for pacemakers. • Closer regulation of the testing process. • The creation of a better "device tracking system" involving "more parties than industry alone. " By studying devices that fail, researchers might learn how to improve their reliability. Source: USATODAY Healthscience News August 14, 2001

CONCLUSION Pacemaker and ICD recalls and safety alerts occur frequently, affect many patients, and appear to be increasing in number and rate. Improve the methodology of reporting these flaws. Remedy for these failures should be improved hardware/software engineering methods.

AP 151 Physiology of the Heart Functions