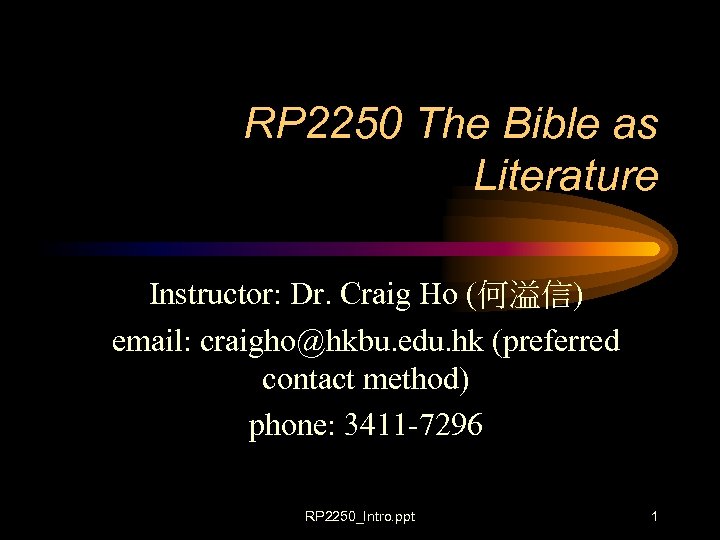 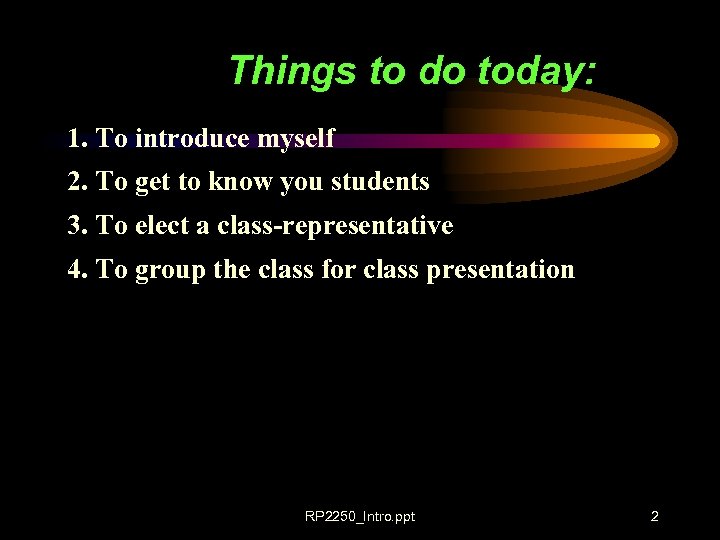 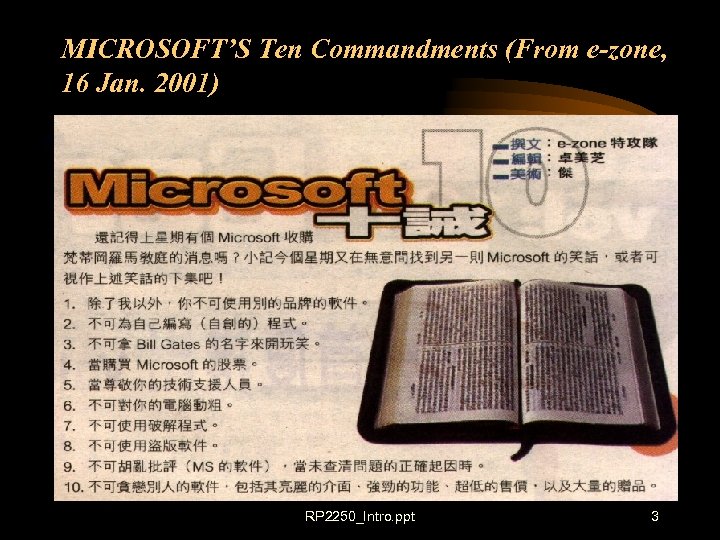 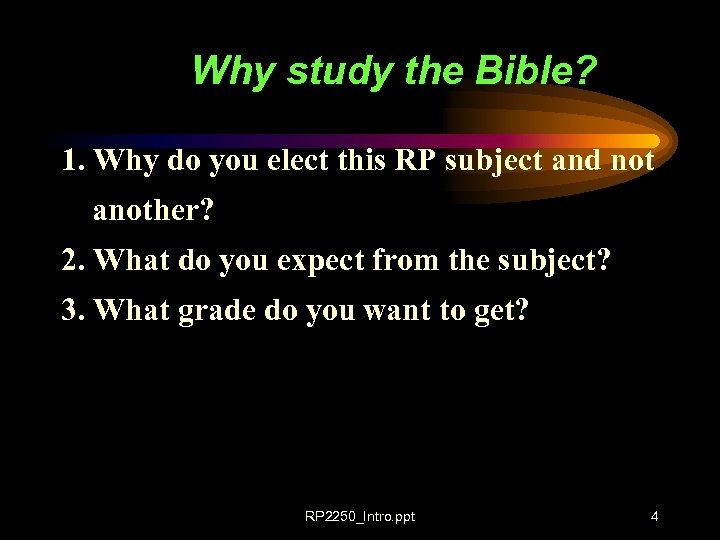 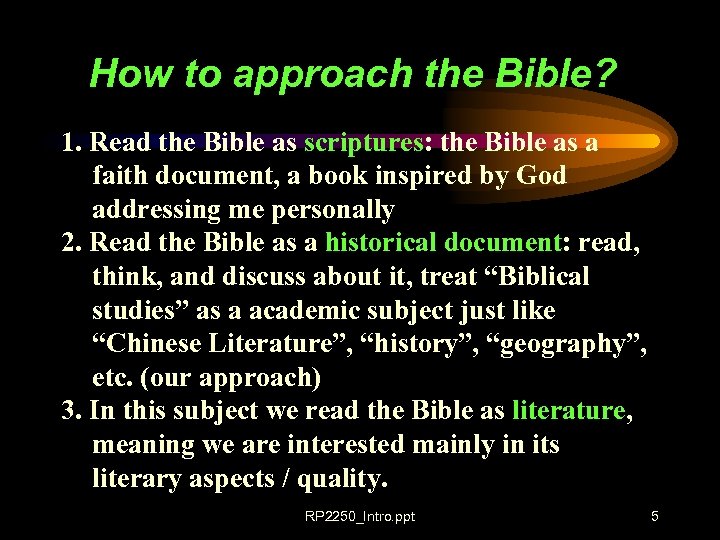 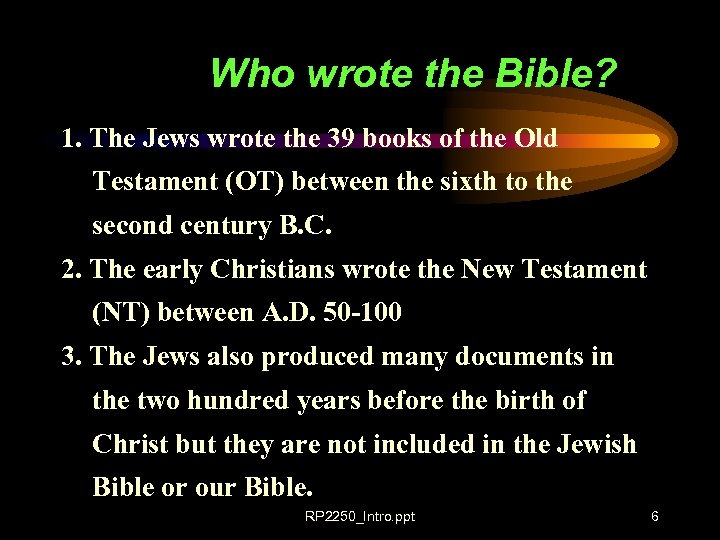 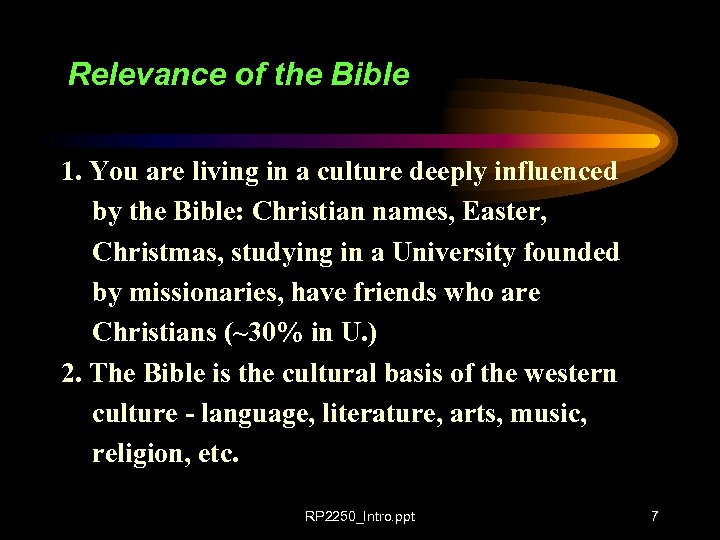 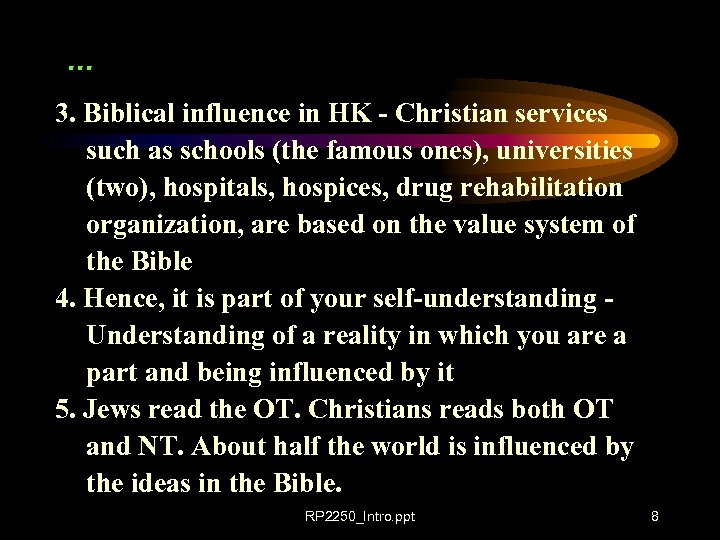 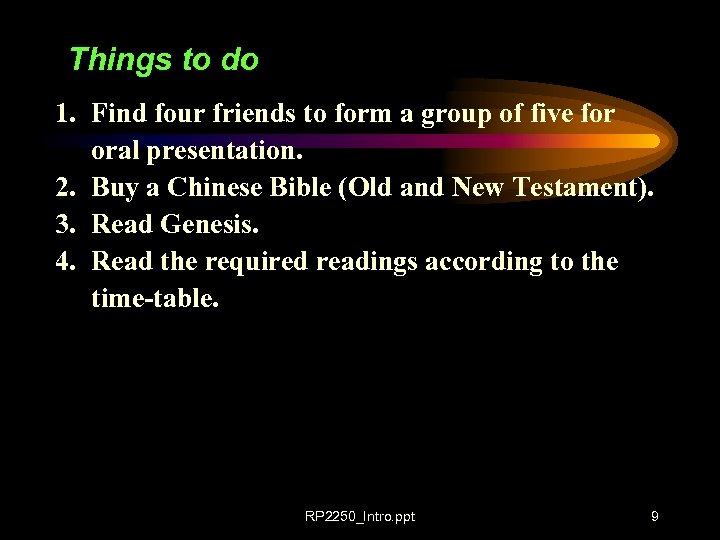 Things to do today: 1. To introduce myself 2. To get to know you students 3. To elect a class-representative 4. To group the class for class presentation RP 2250_Intro. ppt 2

How to approach the Bible? 1. Read the Bible as scriptures: the Bible as a faith document, a book inspired by God addressing me personally 2. Read the Bible as a historical document: read, think, and discuss about it, treat “Biblical studies” as a academic subject just like “Chinese Literature”, “history”, “geography”, etc. (our approach) 3. In this subject we read the Bible as literature, meaning we are interested mainly in its literary aspects / quality. RP 2250_Intro. ppt 5

Who wrote the Bible? 1. The Jews wrote the 39 books of the Old Testament (OT) between the sixth to the second century B. C. 2. The early Christians wrote the New Testament (NT) between A. D. 50 -100 3. The Jews also produced many documents in the two hundred years before the birth of Christ but they are not included in the Jewish Bible or our Bible. RP 2250_Intro. ppt 6

Relevance of the Bible 1. You are living in a culture deeply influenced by the Bible: Christian names, Easter, Christmas, studying in a University founded by missionaries, have friends who are Christians (~30% in U. ) 2. The Bible is the cultural basis of the western culture - language, literature, arts, music, religion, etc. RP 2250_Intro. ppt 7

. . . 3. Biblical influence in HK - Christian services such as schools (the famous ones), universities (two), hospitals, hospices, drug rehabilitation organization, are based on the value system of the Bible 4. Hence, it is part of your self-understanding Understanding of a reality in which you are a part and being influenced by it 5. Jews read the OT. Christians reads both OT and NT. About half the world is influenced by the ideas in the Bible. RP 2250_Intro. ppt 8

Things to do 1. Find four friends to form a group of five for oral presentation. 2. Buy a Chinese Bible (Old and New Testament). 3. Read Genesis. 4. Read the required readings according to the time-table. RP 2250_Intro. ppt 9