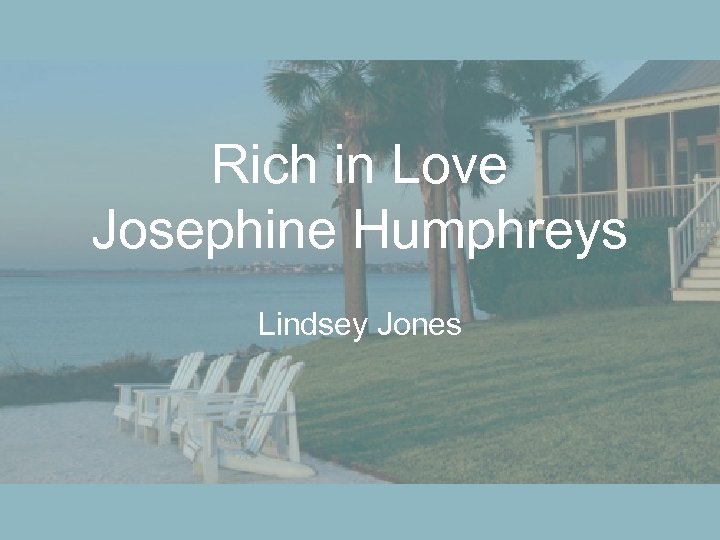 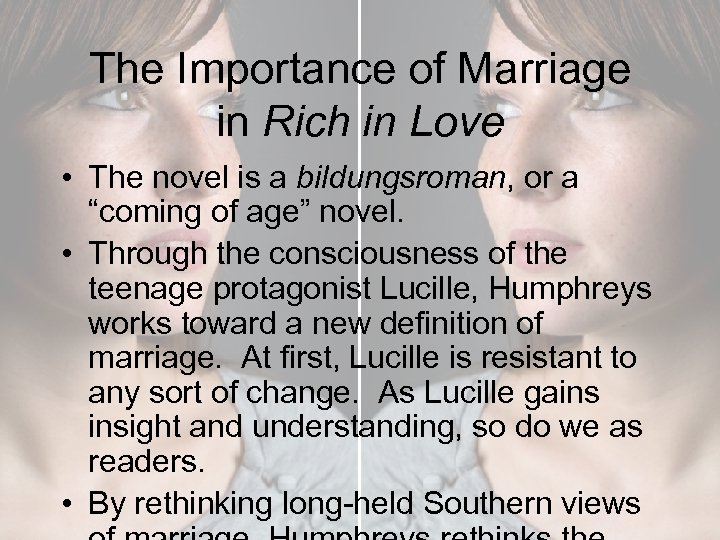 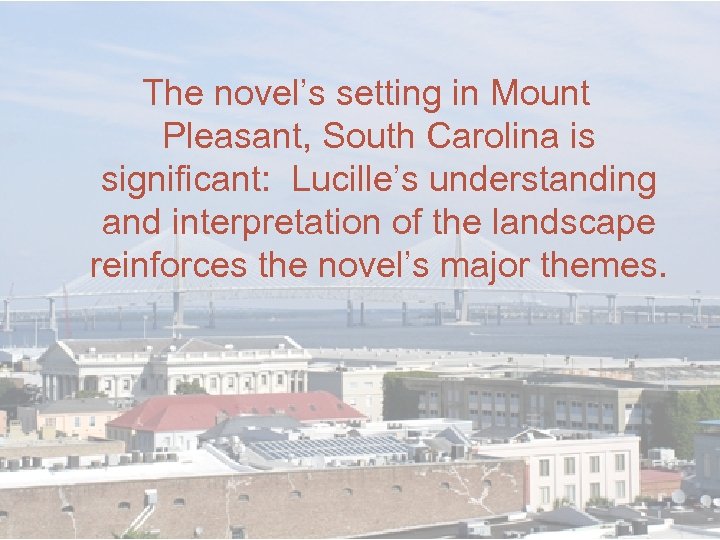 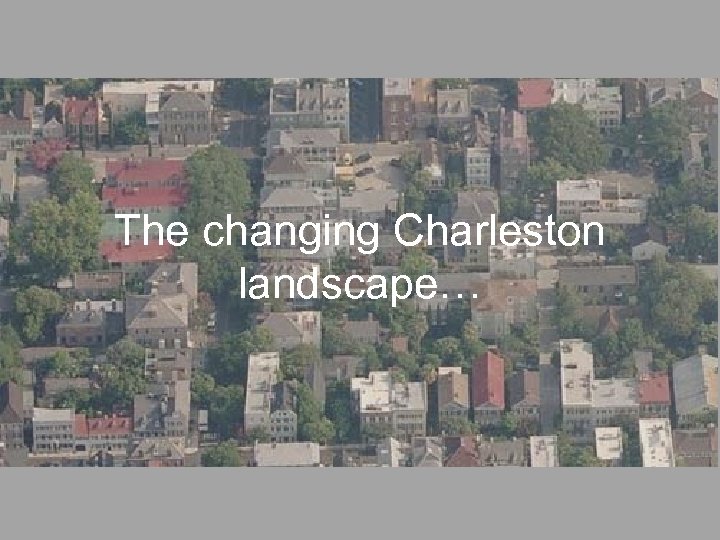 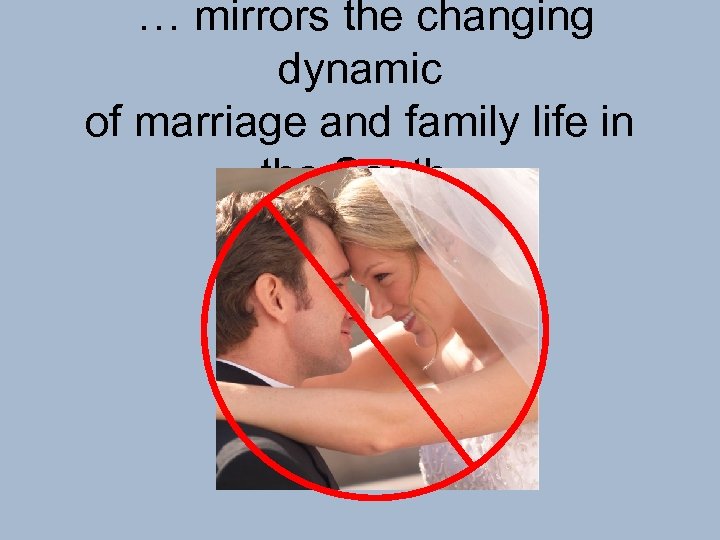 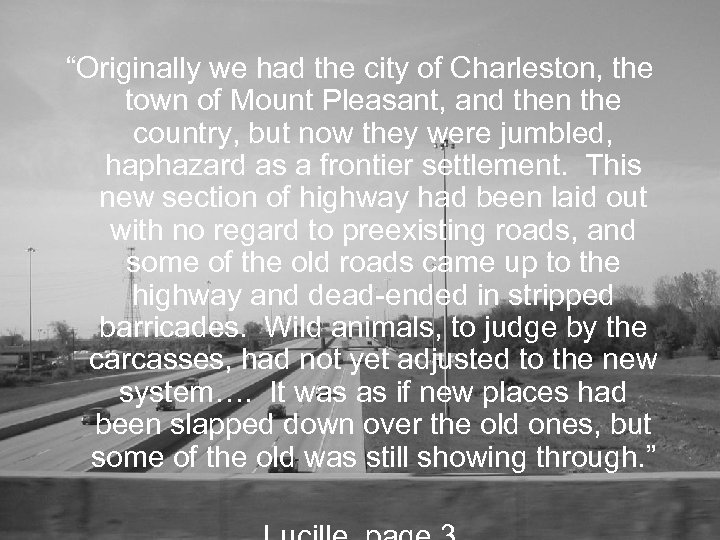 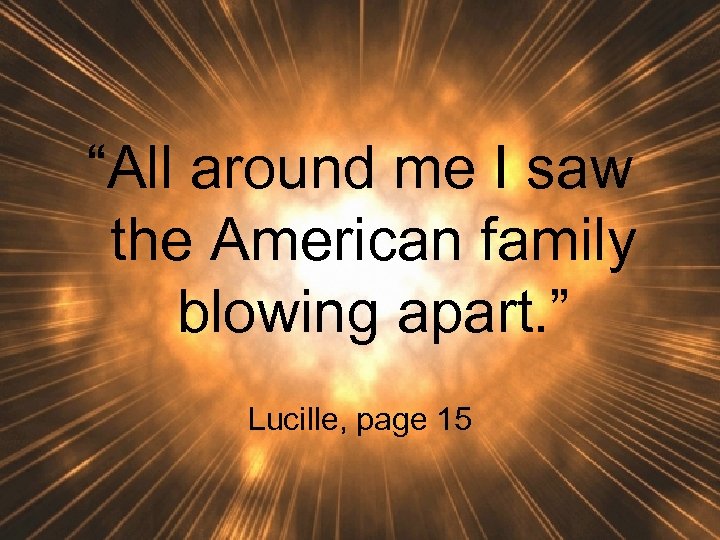 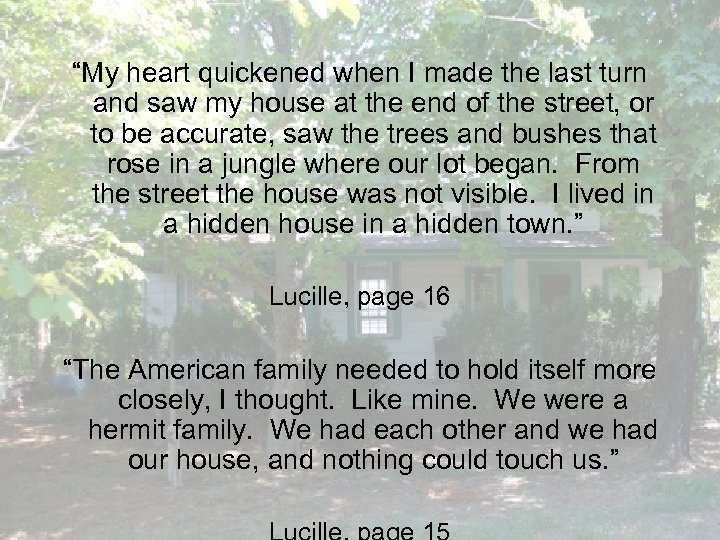 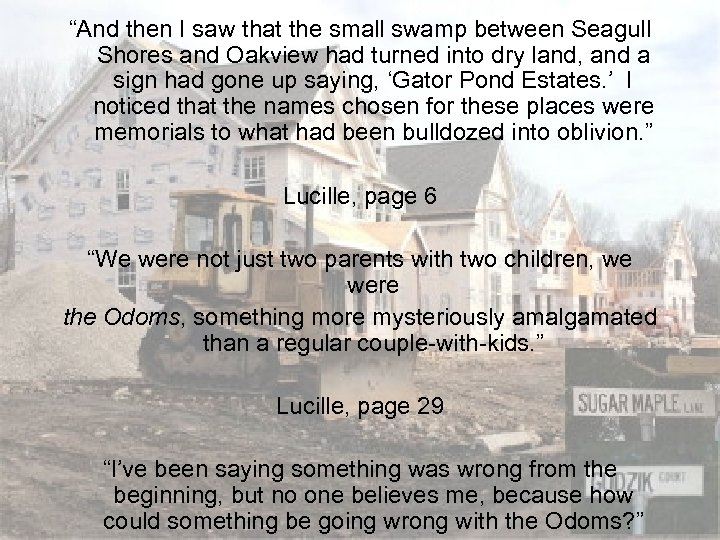 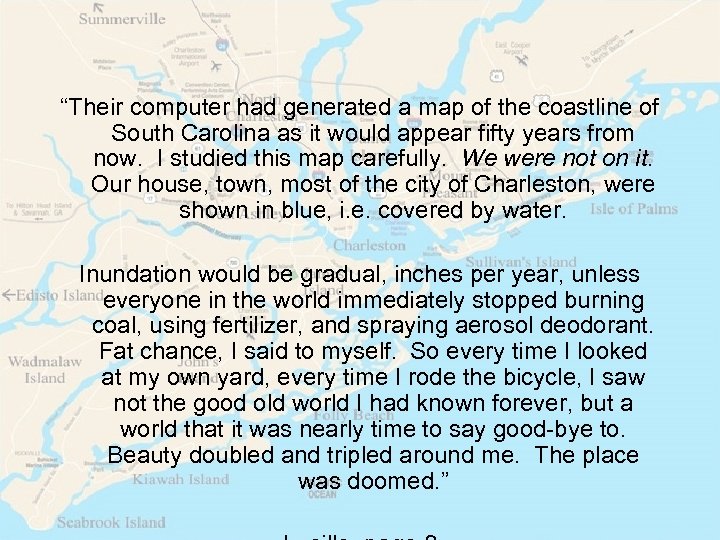 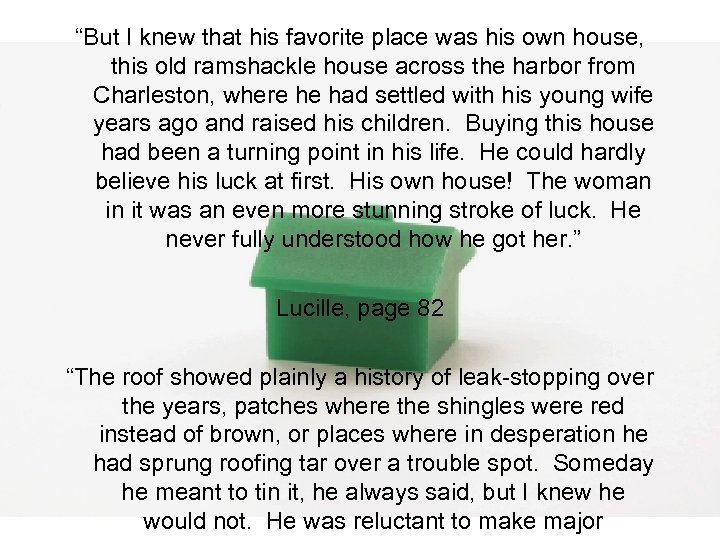 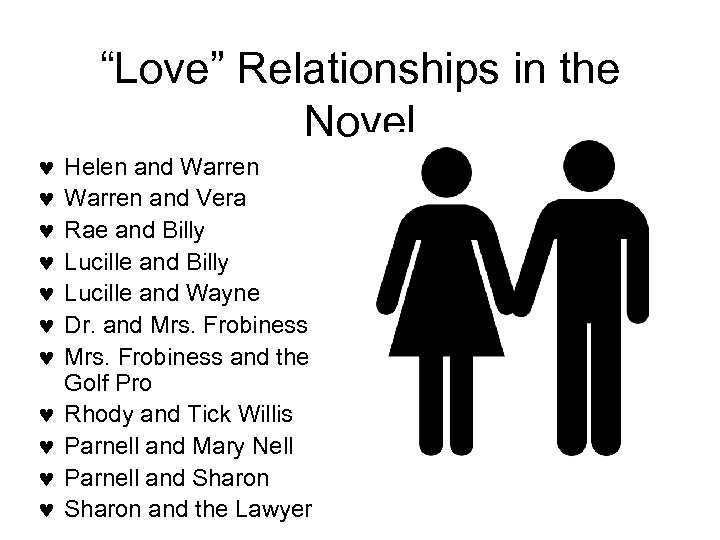 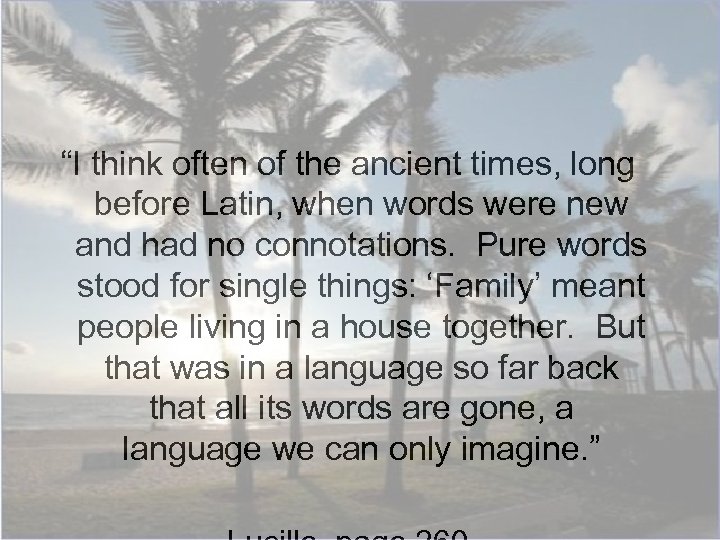 The Importance of Marriage in Rich in Love • The novel is a bildungsroman, or a “coming of age” novel. • Through the consciousness of the teenage protagonist Lucille, Humphreys works toward a new definition of marriage. At first, Lucille is resistant to any sort of change. As Lucille gains insight and understanding, so do we as readers. • By rethinking long-held Southern views

The novel’s setting in Mount Pleasant, South Carolina is significant: Lucille’s understanding and interpretation of the landscape reinforces the novel’s major themes.

… mirrors the changing dynamic of marriage and family life in the South.

“Originally we had the city of Charleston, the town of Mount Pleasant, and then the country, but now they were jumbled, haphazard as a frontier settlement. This new section of highway had been laid out with no regard to preexisting roads, and some of the old roads came up to the highway and dead-ended in stripped barricades. Wild animals, to judge by the carcasses, had not yet adjusted to the new system…. It was as if new places had been slapped down over the old ones, but some of the old was still showing through. ”

“All around me I saw the American family blowing apart. ” Lucille, page 15

“My heart quickened when I made the last turn and saw my house at the end of the street, or to be accurate, saw the trees and bushes that rose in a jungle where our lot began. From the street the house was not visible. I lived in a hidden house in a hidden town. ” Lucille, page 16 “The American family needed to hold itself more closely, I thought. Like mine. We were a hermit family. We had each other and we had our house, and nothing could touch us. ”

“And then I saw that the small swamp between Seagull Shores and Oakview had turned into dry land, and a sign had gone up saying, ‘Gator Pond Estates. ’ I noticed that the names chosen for these places were memorials to what had been bulldozed into oblivion. ” Lucille, page 6 “We were not just two parents with two children, we were the Odoms, something more mysteriously amalgamated than a regular couple-with-kids. ” Lucille, page 29 “I’ve been saying something was wrong from the beginning, but no one believes me, because how could something be going wrong with the Odoms? ”

“Their computer had generated a map of the coastline of South Carolina as it would appear fifty years from now. I studied this map carefully. We were not on it. Our house, town, most of the city of Charleston, were shown in blue, i. e. covered by water. Inundation would be gradual, inches per year, unless everyone in the world immediately stopped burning coal, using fertilizer, and spraying aerosol deodorant. Fat chance, I said to myself. So every time I looked at my own yard, every time I rode the bicycle, I saw not the good old world I had known forever, but a world that it was nearly time to say good-bye to. Beauty doubled and tripled around me. The place was doomed. ”

“But I knew that his favorite place was his own house, this old ramshackle house across the harbor from Charleston, where he had settled with his young wife years ago and raised his children. Buying this house had been a turning point in his life. He could hardly believe his luck at first. His own house! The woman in it was an even more stunning stroke of luck. He never fully understood how he got her. ” Lucille, page 82 “The roof showed plainly a history of leak-stopping over the years, patches where the shingles were red instead of brown, or places where in desperation he had sprung roofing tar over a trouble spot. Someday he meant to tin it, he always said, but I knew he would not. He was reluctant to make major

“Love” Relationships in the Novel Helen and Warren and Vera Rae and Billy Lucille and Wayne Dr. and Mrs. Frobiness and the Golf Pro Rhody and Tick Willis Parnell and Mary Nell Parnell and Sharon and the Lawyer

“I think often of the ancient times, long before Latin, when words were new and had no connotations. Pure words stood for single things: ‘Family’ meant people living in a house together. But that was in a language so far back that all its words are gone, a language we can only imagine. ”

VALENTINE’S DAY IS A DAY OF LOVE WHERE