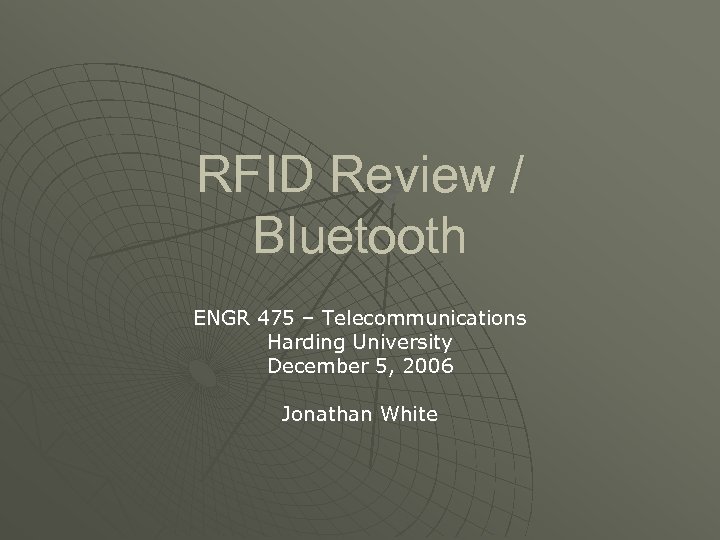 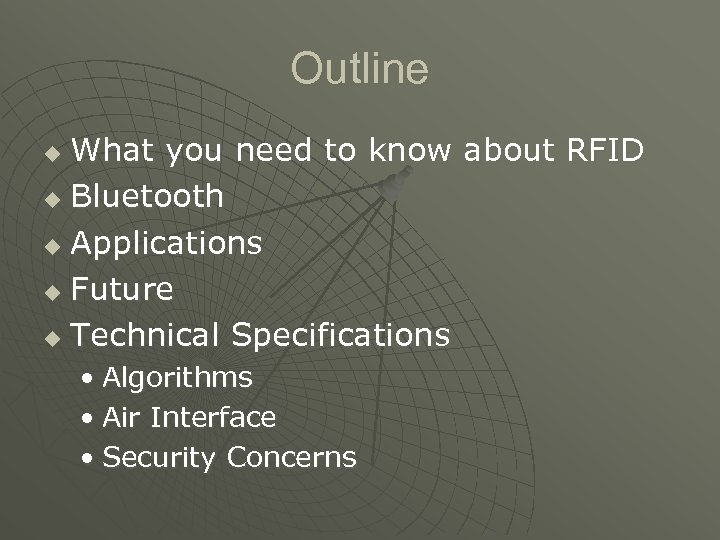 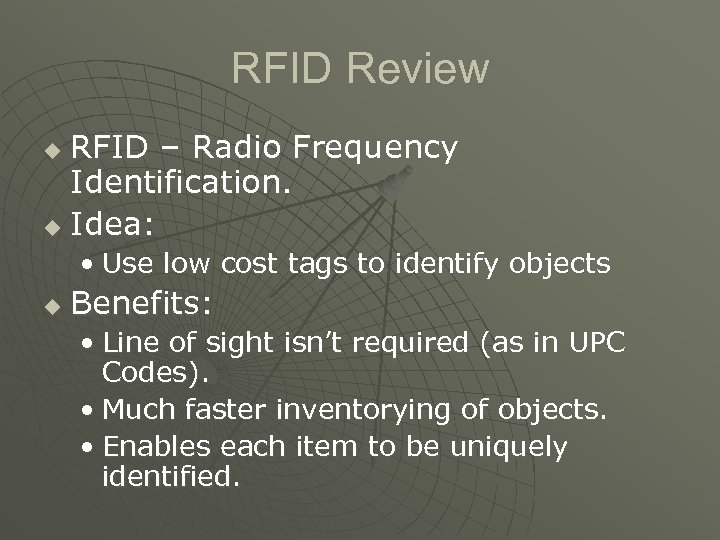 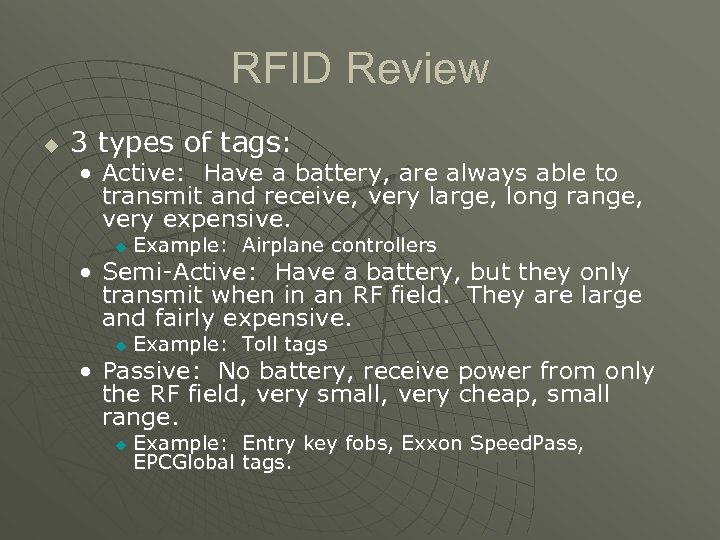 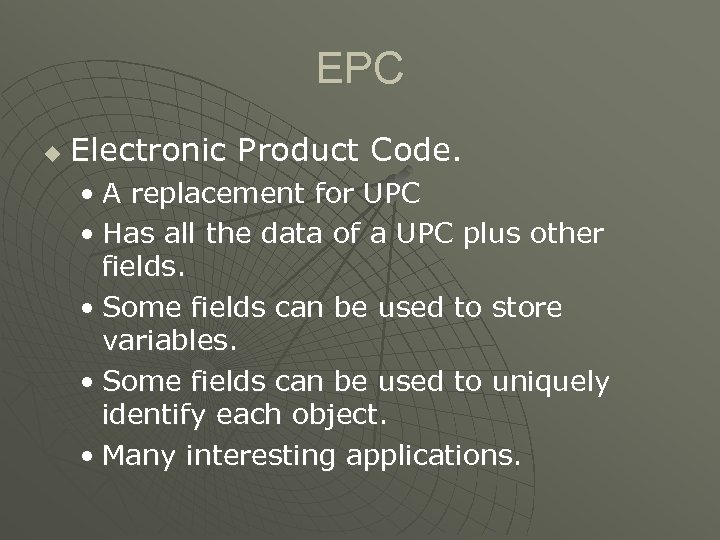 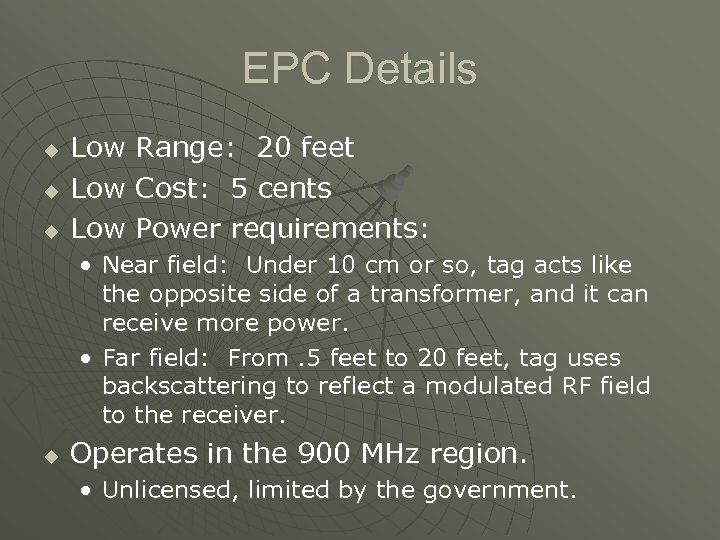 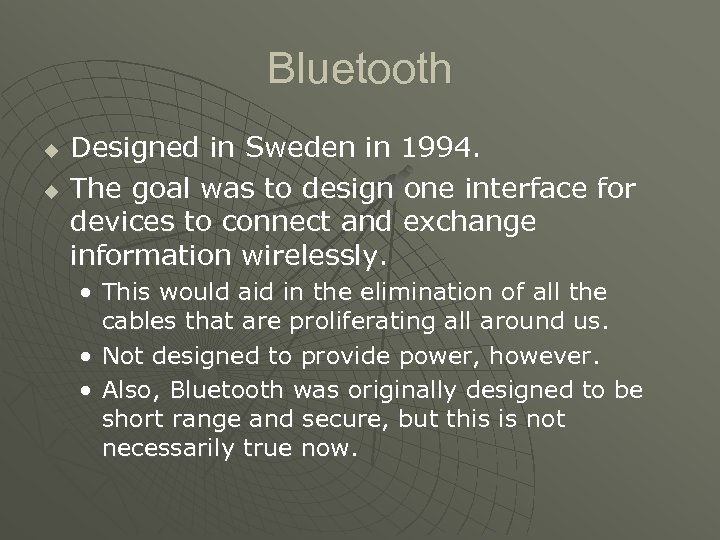 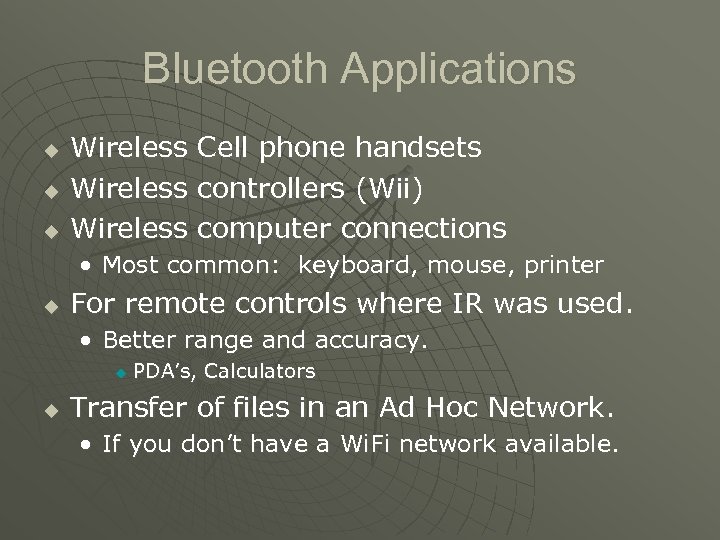 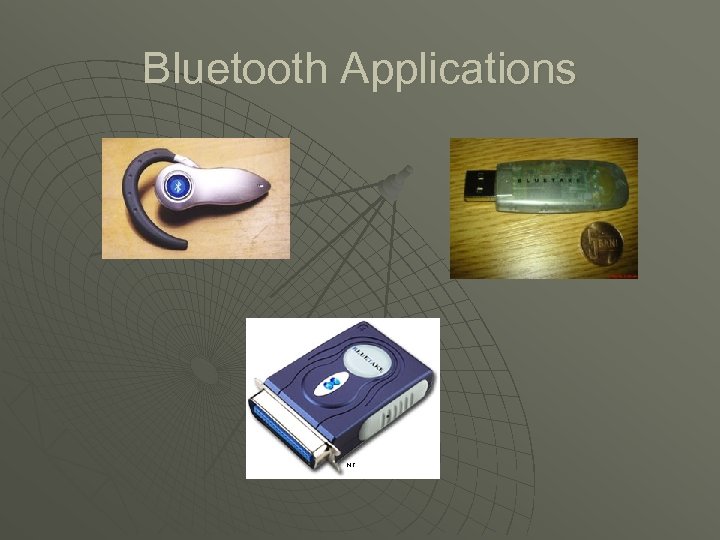 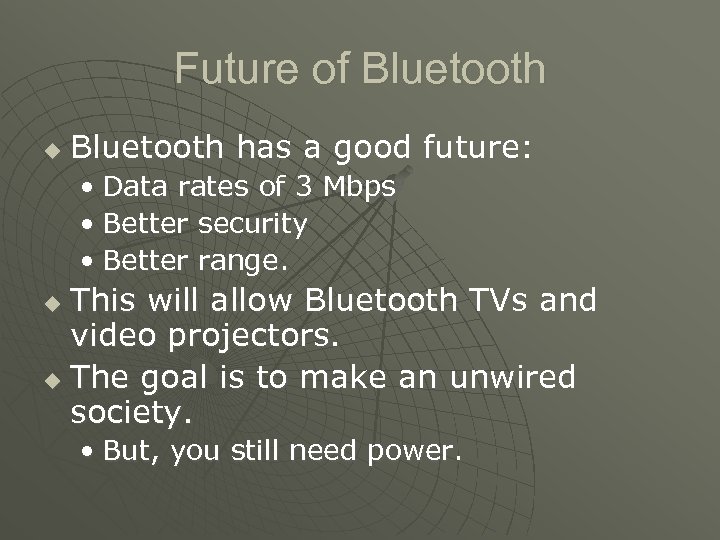 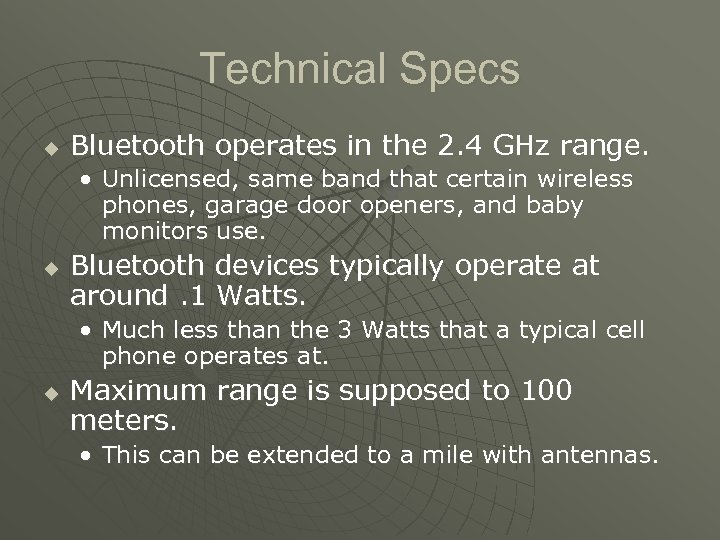 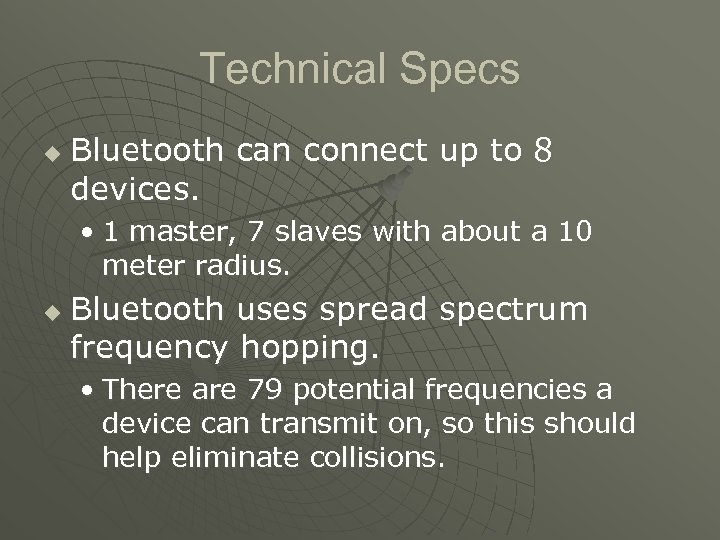 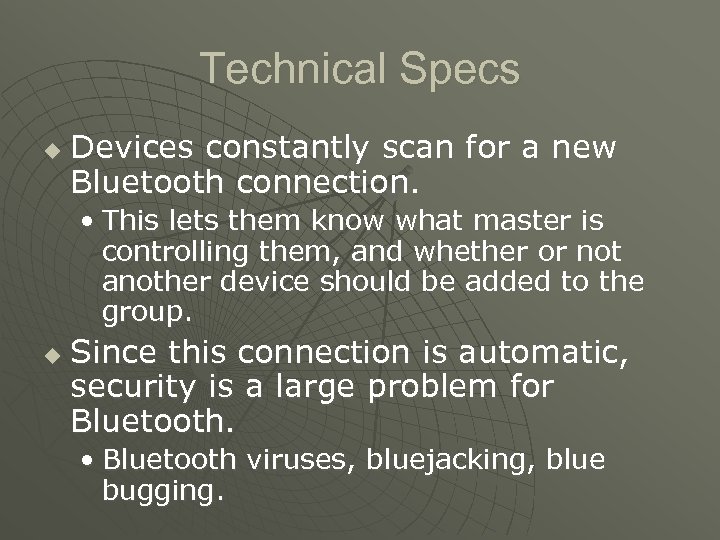 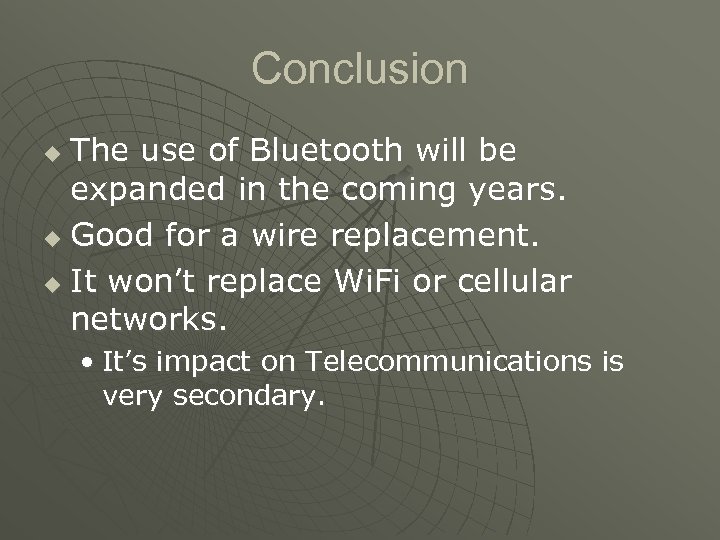 RFID Review RFID – Radio Frequency Identification. u Idea: u • Use low cost tags to identify objects u Benefits: • Line of sight isn’t required (as in UPC Codes). • Much faster inventorying of objects. • Enables each item to be uniquely identified.

EPC Details u u u Low Range: 20 feet Low Cost: 5 cents Low Power requirements: • Near field: Under 10 cm or so, tag acts like the opposite side of a transformer, and it can receive more power. • Far field: From. 5 feet to 20 feet, tag uses backscattering to reflect a modulated RF field to the receiver. u Operates in the 900 MHz region. • Unlicensed, limited by the government.

Bluetooth u u Designed in Sweden in 1994. The goal was to design one interface for devices to connect and exchange information wirelessly. • This would aid in the elimination of all the cables that are proliferating all around us. • Not designed to provide power, however. • Also, Bluetooth was originally designed to be short range and secure, but this is not necessarily true now.

Bluetooth Applications u u u Wireless Cell phone handsets Wireless controllers (Wii) Wireless computer connections • Most common: keyboard, mouse, printer u For remote controls where IR was used. • Better range and accuracy. u u PDA’s, Calculators Transfer of files in an Ad Hoc Network. • If you don’t have a Wi. Fi network available.

Future of Bluetooth u Bluetooth has a good future: • Data rates of 3 Mbps • Better security • Better range. This will allow Bluetooth TVs and video projectors. u The goal is to make an unwired society. u • But, you still need power.

Technical Specs u Bluetooth operates in the 2. 4 GHz range. • Unlicensed, same band that certain wireless phones, garage door openers, and baby monitors use. u Bluetooth devices typically operate at around. 1 Watts. • Much less than the 3 Watts that a typical cell phone operates at. u Maximum range is supposed to 100 meters. • This can be extended to a mile with antennas.

Technical Specs u Bluetooth can connect up to 8 devices. • 1 master, 7 slaves with about a 10 meter radius. u Bluetooth uses spread spectrum frequency hopping. • There are 79 potential frequencies a device can transmit on, so this should help eliminate collisions.

Technical Specs u Devices constantly scan for a new Bluetooth connection. • This lets them know what master is controlling them, and whether or not another device should be added to the group. u Since this connection is automatic, security is a large problem for Bluetooth. • Bluetooth viruses, bluejacking, blue bugging.

Conclusion The use of Bluetooth will be expanded in the coming years. u Good for a wire replacement. u It won’t replace Wi. Fi or cellular networks. u • It’s impact on Telecommunications is very secondary.