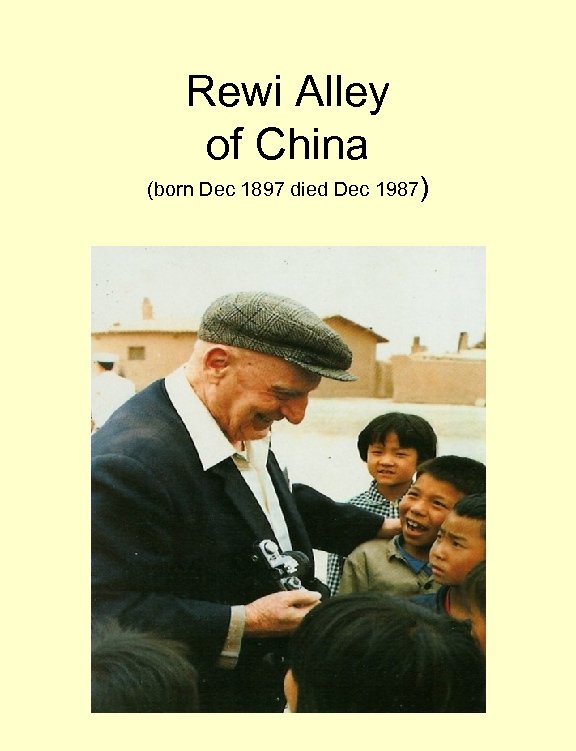 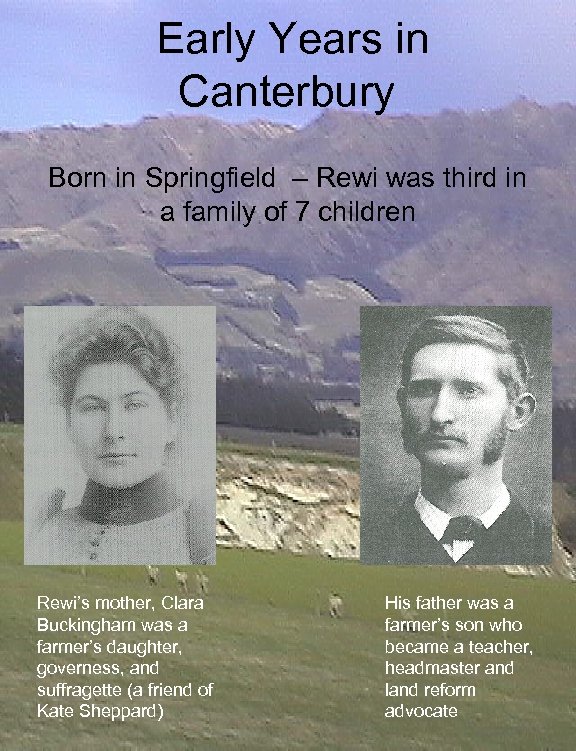 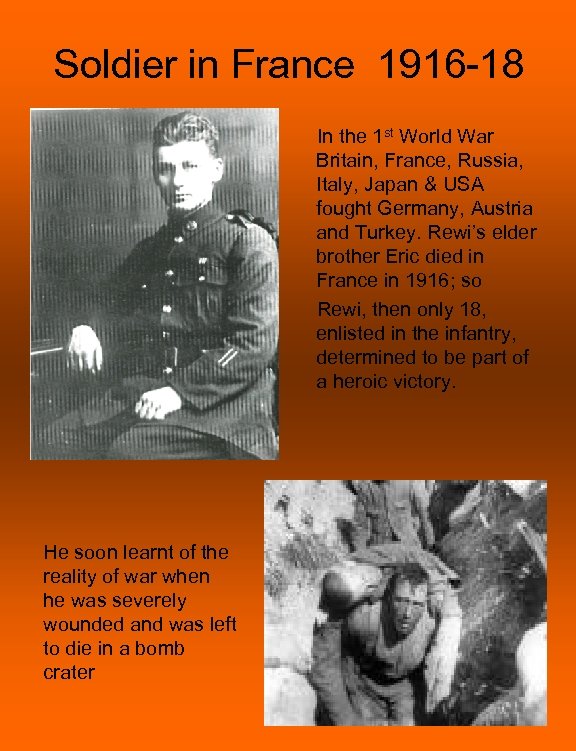 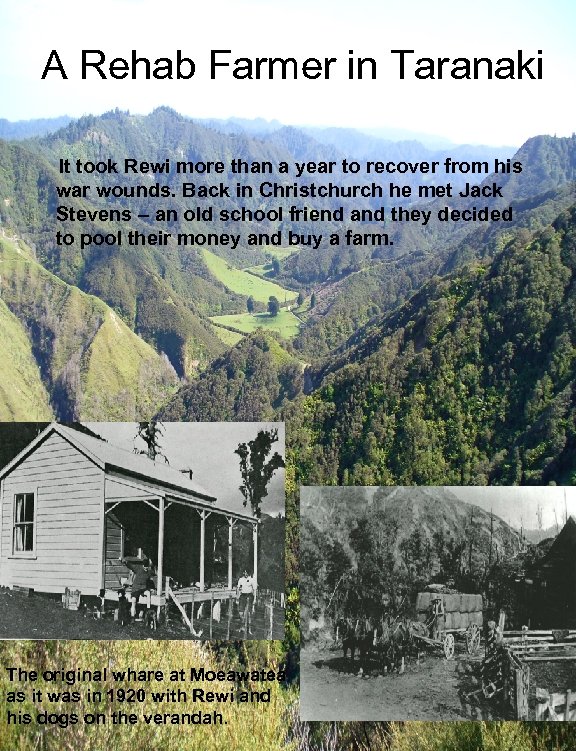 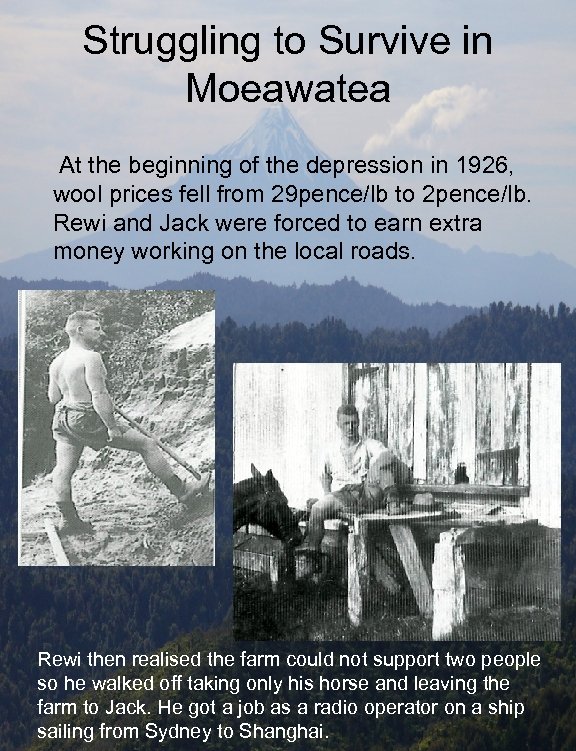 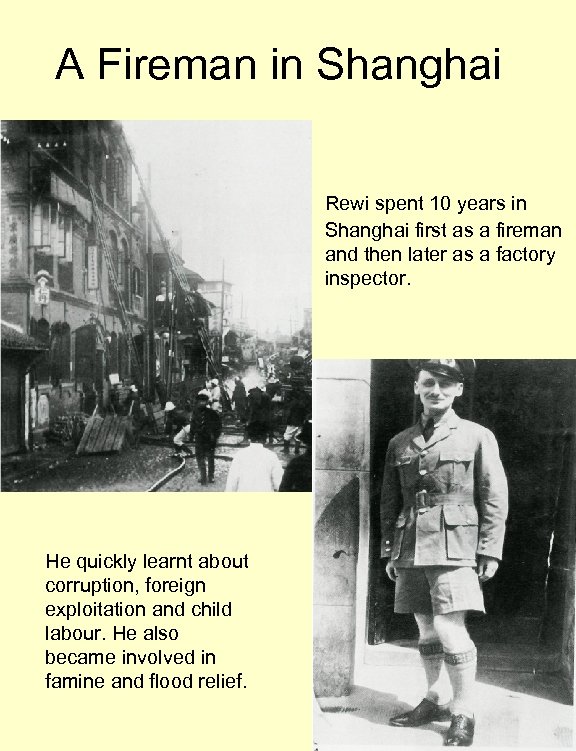 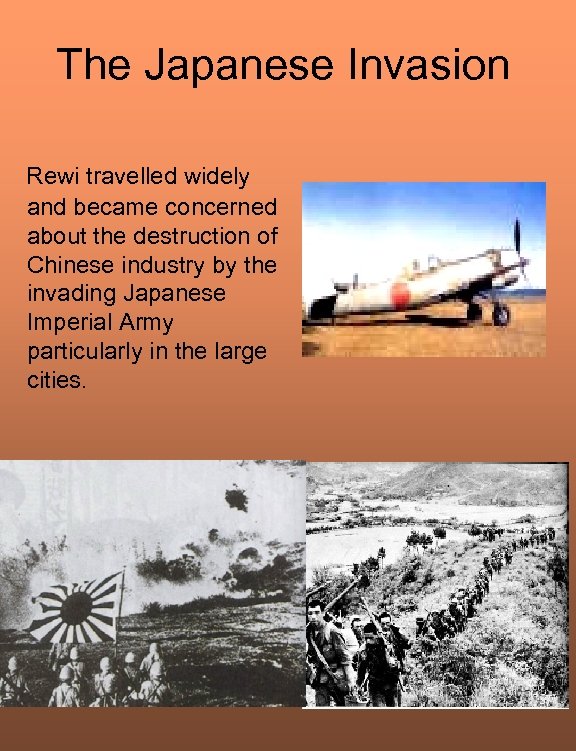 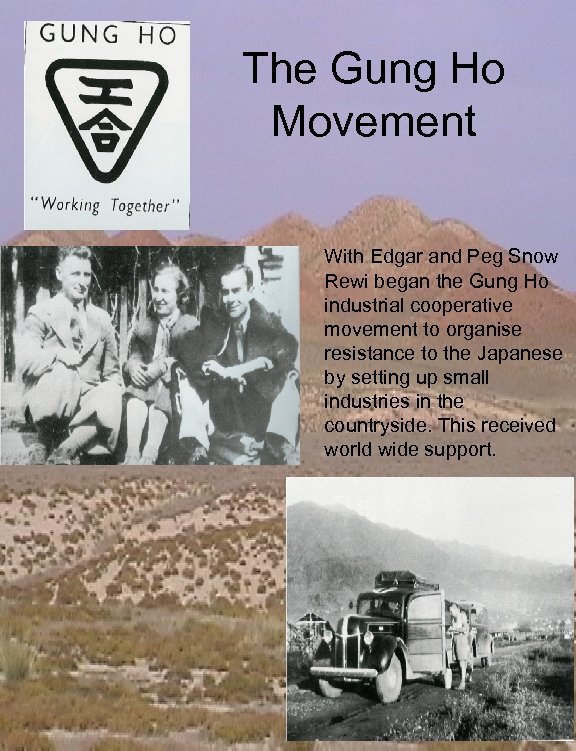 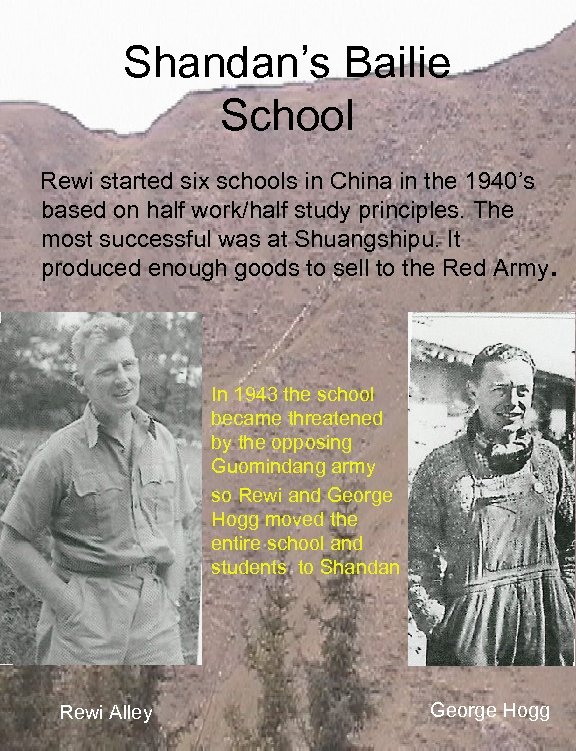 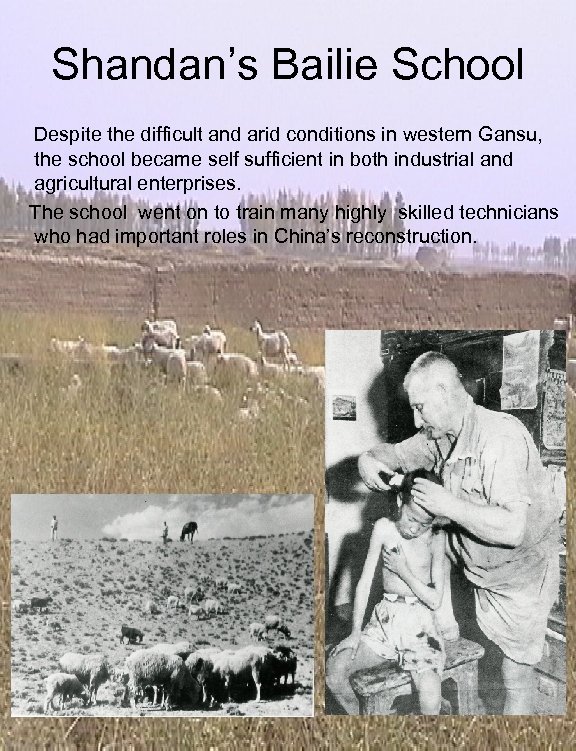 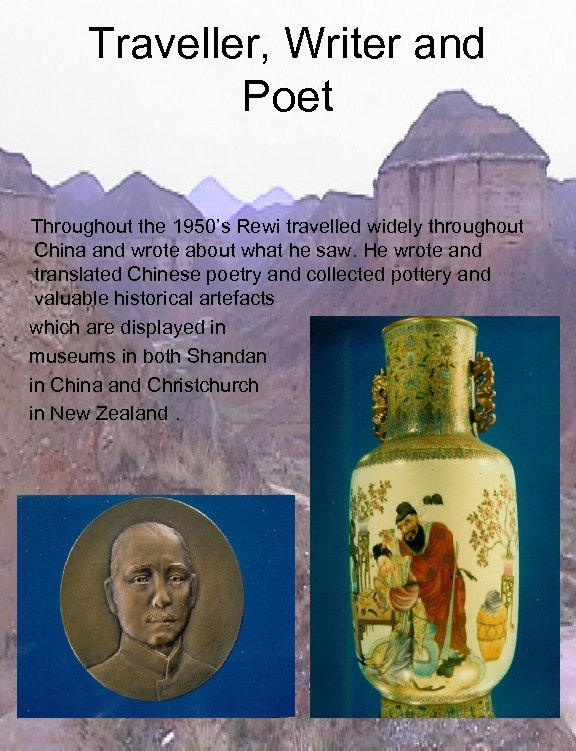 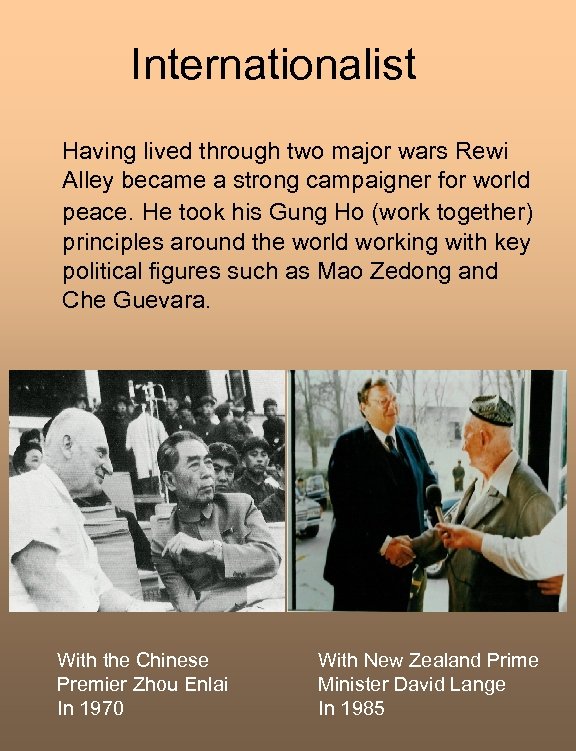 Early Years in Canterbury Born in Springfield – Rewi was third in a family of 7 children , Rewi’s mother, Clara Buckingham was a farmer’s daughter, governess, and suffragette (a friend of Kate Sheppard) His father was a farmer’s son who became a teacher, headmaster and land reform advocate

Soldier in France 1916 -18 In the 1 st World War Britain, France, Russia, Italy, Japan & USA fought Germany, Austria and Turkey. Rewi’s elder brother Eric died in France in 1916; so Rewi, then only 18, enlisted in the infantry, determined to be part of a heroic victory. He soon learnt of the reality of war when he was severely wounded and was left to die in a bomb crater

A Rehab Farmer in Taranaki It took Rewi more than a year to recover from his war wounds. Back in Christchurch he met Jack Stevens – an old school friend and they decided to pool their money and buy a farm. The original whare at Moeawatea as it was in 1920 with Rewi and his dogs on the verandah.

Struggling to Survive in Moeawatea At the beginning of the depression in 1926, wool prices fell from 29 pence/lb to 2 pence/lb. Rewi and Jack were forced to earn extra money working on the local roads. Rewi then realised the farm could not support two people so he walked off taking only his horse and leaving the farm to Jack. He got a job as a radio operator on a ship sailing from Sydney to Shanghai.

A Fireman in Shanghai Rewi spent 10 years in Shanghai first as a fireman and then later as a factory inspector. He quickly learnt about corruption, foreign exploitation and child labour. He also became involved in famine and flood relief.

The Japanese Invasion Rewi travelled widely and became concerned about the destruction of Chinese industry by the invading Japanese Imperial Army particularly in the large cities.

The Gung Ho Movement With Edgar and Peg Snow Rewi began the Gung Ho industrial cooperative movement to organise resistance to the Japanese by setting up small industries in the countryside. This received world wide support.

Shandan’s Bailie School Rewi started six schools in China in the 1940’s based on half work/half study principles. The most successful was at Shuangshipu. It produced enough goods to sell to the Red Army. In 1943 the school became threatened by the opposing Guomindang army so Rewi and George Hogg moved the entire school and students to Shandan Rewi Alley George Hogg

Shandan’s Bailie School Despite the difficult and arid conditions in western Gansu, the school became self sufficient in both industrial and agricultural enterprises. The school went on to train many highly skilled technicians who had important roles in China’s reconstruction.

Traveller, Writer and Poet Throughout the 1950’s Rewi travelled widely throughout China and wrote about what he saw. He wrote and translated Chinese poetry and collected pottery and valuable historical artefacts which are displayed in museums in both Shandan in China and Christchurch in New Zealand.

Internationalist Having lived through two major wars Rewi Alley became a strong campaigner for world peace. He took his Gung Ho (work together) principles around the world working with key political figures such as Mao Zedong and Che Guevara. With the Chinese Premier Zhou Enlai In 1970 With New Zealand Prime Minister David Lange In 1985