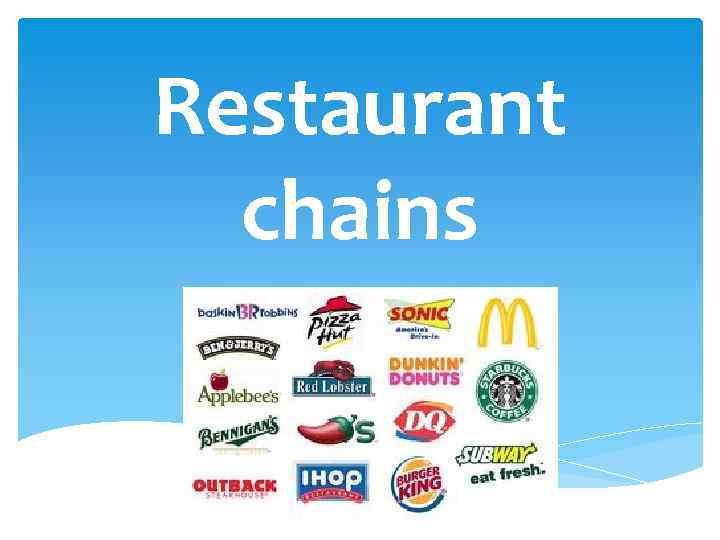 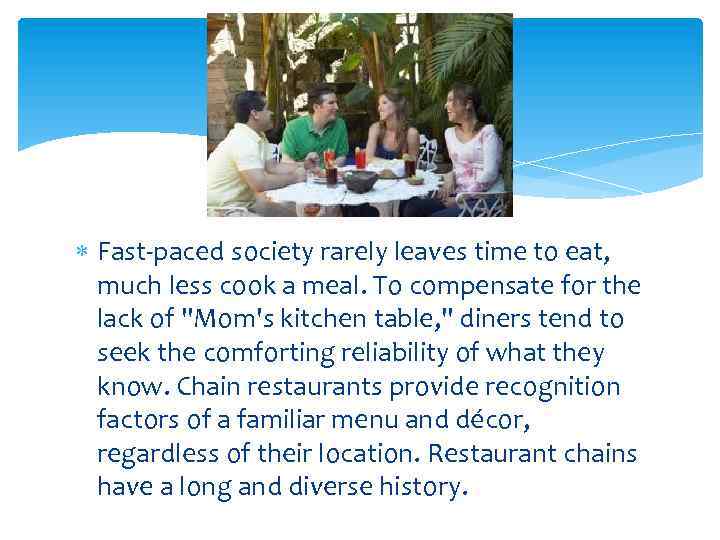 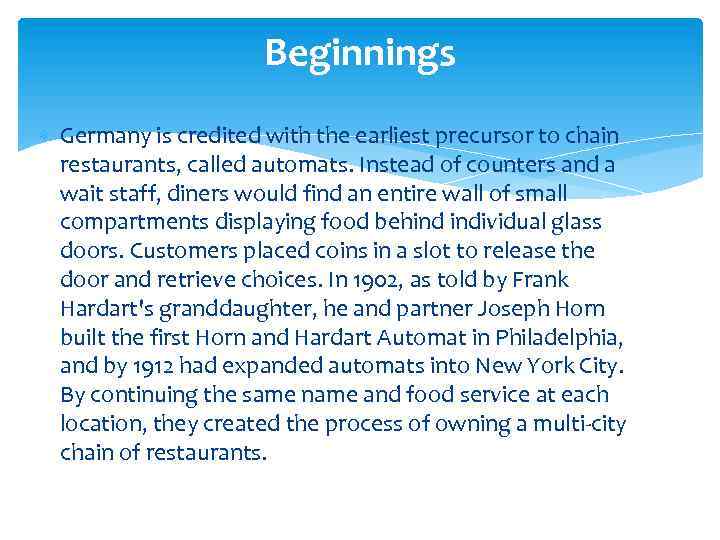 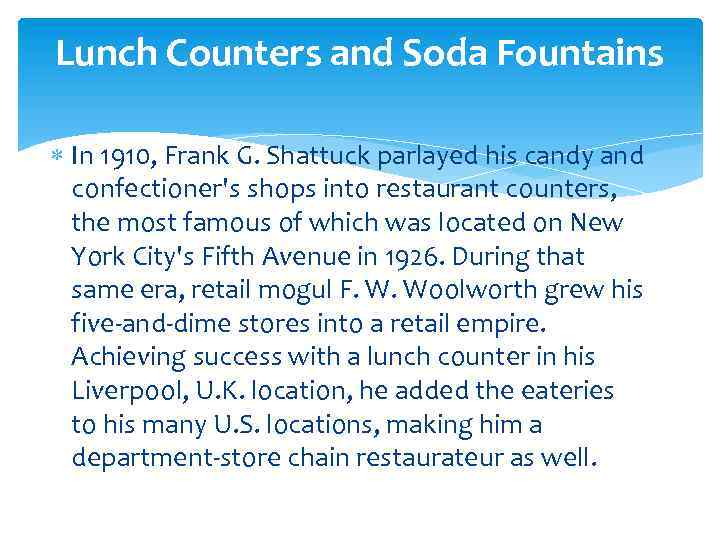 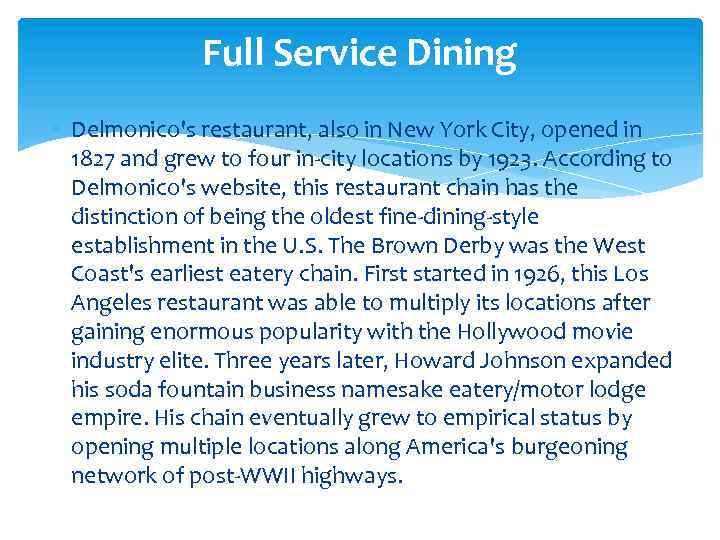 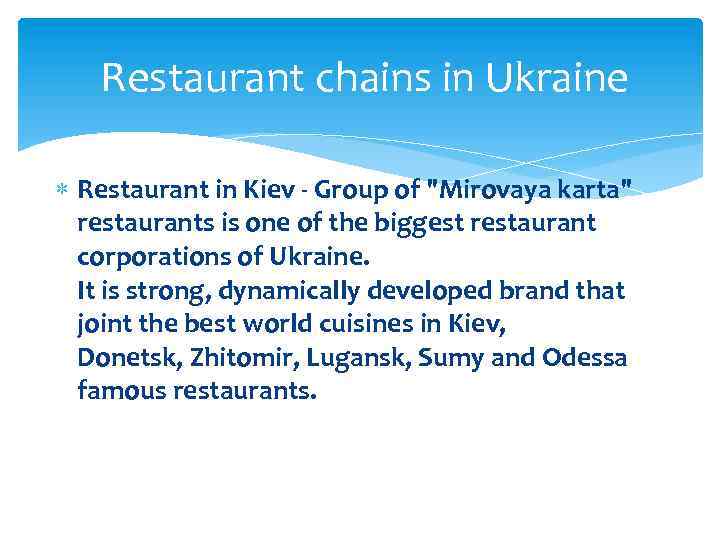 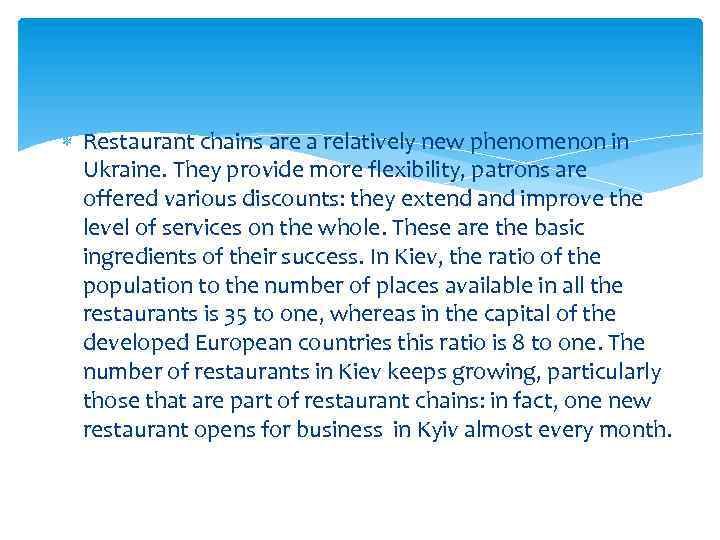 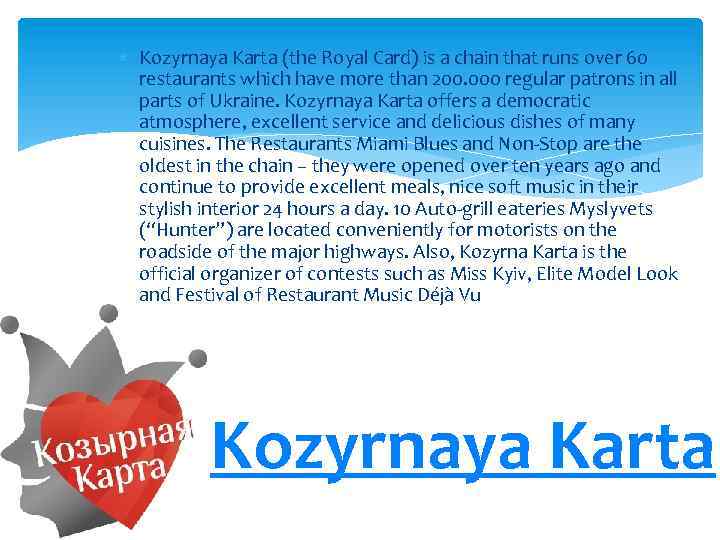 Fast-paced society rarely leaves time to eat, much less cook a meal. To compensate for the lack of "Mom's kitchen table, " diners tend to seek the comforting reliability of what they know. Chain restaurants provide recognition factors of a familiar menu and décor, regardless of their location. Restaurant chains have a long and diverse history.

Beginnings Germany is credited with the earliest precursor to chain restaurants, called automats. Instead of counters and a wait staff, diners would find an entire wall of small compartments displaying food behind individual glass doors. Customers placed coins in a slot to release the door and retrieve choices. In 1902, as told by Frank Hardart's granddaughter, he and partner Joseph Horn built the first Horn and Hardart Automat in Philadelphia, and by 1912 had expanded automats into New York City. By continuing the same name and food service at each location, they created the process of owning a multi-city chain of restaurants.

Lunch Counters and Soda Fountains In 1910, Frank G. Shattuck parlayed his candy and confectioner's shops into restaurant counters, the most famous of which was located on New York City's Fifth Avenue in 1926. During that same era, retail mogul F. W. Woolworth grew his five-and-dime stores into a retail empire. Achieving success with a lunch counter in his Liverpool, U. K. location, he added the eateries to his many U. S. locations, making him a department-store chain restaurateur as well.

Full Service Dining Delmonico's restaurant, also in New York City, opened in 1827 and grew to four in-city locations by 1923. According to Delmonico's website, this restaurant chain has the distinction of being the oldest fine-dining-style establishment in the U. S. The Brown Derby was the West Coast's earliest eatery chain. First started in 1926, this Los Angeles restaurant was able to multiply its locations after gaining enormous popularity with the Hollywood movie industry elite. Three years later, Howard Johnson expanded his soda fountain business namesake eatery/motor lodge empire. His chain eventually grew to empirical status by opening multiple locations along America's burgeoning network of post-WWII highways.

Fast Food Nathan's Famous hot dog chain started in 1916 with a single concession stand on the Coney Island boardwalk and expanded to over 300 units in multiple cities. 1921 and 1922 gave birth to White Castle Hamburgers and A&W Root Beer stands. Probably the most prolific chain restaurant of all (not just fast-food style) would be Mc. Donald's Hamburgers. Ray Kroc purchased a small independent burger joint in the 1950 s and parlayed it into the long-reigning number one fast food chain, with locations all over the world. Kroc died in 1984, but his hamburger empire is still listed on the Quick Serve Restaurant official top ten as the number one chain restaurant.

Restaurant chains in Ukraine Restaurant in Kiev - Group of "Mirovaya karta" restaurants is one of the biggest restaurant corporations of Ukraine. It is strong, dynamically developed brand that joint the best world cuisines in Kiev, Donetsk, Zhitomir, Lugansk, Sumy and Odessa famous restaurants.

Restaurant chains are a relatively new phenomenon in Ukraine. They provide more flexibility, patrons are offered various discounts: they extend and improve the level of services on the whole. These are the basic ingredients of their success. In Kiev, the ratio of the population to the number of places available in all the restaurants is 35 to one, whereas in the capital of the developed European countries this ratio is 8 to one. The number of restaurants in Kiev keeps growing, particularly those that are part of restaurant chains: in fact, one new restaurant opens for business in Kyiv almost every month.

Kozyrnaya Karta (the Royal Card) is a chain that runs over 60 restaurants which have more than 200. 000 regular patrons in all parts of Ukraine. Kozyrnaya Karta offers a democratic atmosphere, excellent service and delicious dishes of many cuisines. The Restaurants Miami Blues and Non-Stop are the oldest in the chain – they were opened over ten years ago and continue to provide excellent meals, nice soft music in their stylish interior 24 hours a day. 10 Auto-grill eateries Myslyvets (“Hunter”) are located conveniently for motorists on the roadside of the major highways. Also, Kozyrna Karta is the official organizer of contests such as Miss Kyiv, Elite Model Look and Festival of Restaurant Music Déjà Vu Kozyrnaya Karta

FAST FOOD Made by : Sofienko Olga