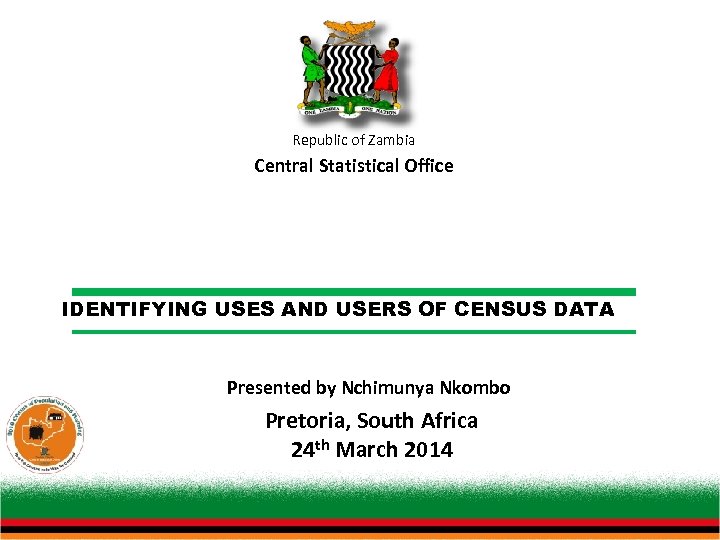 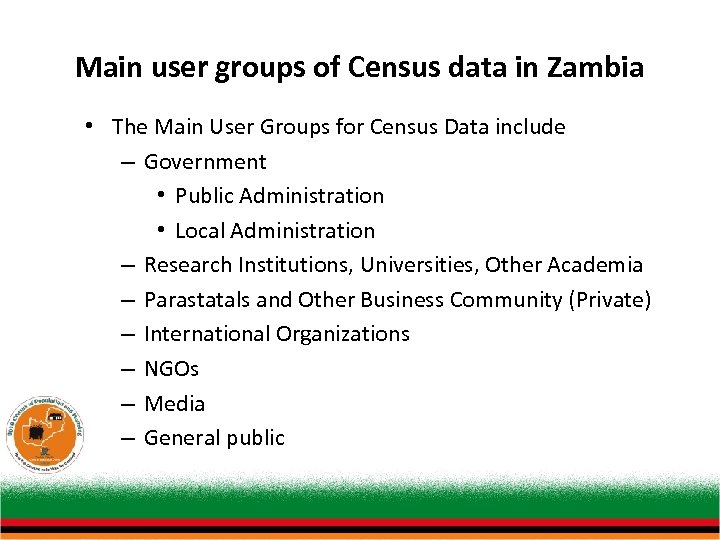 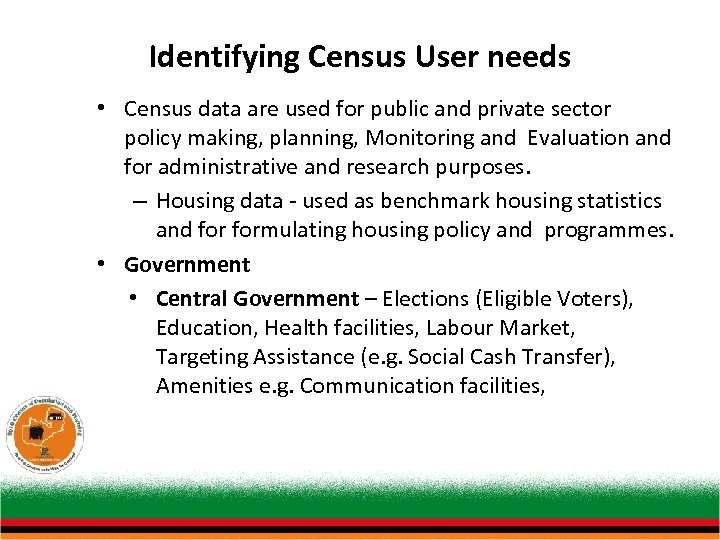 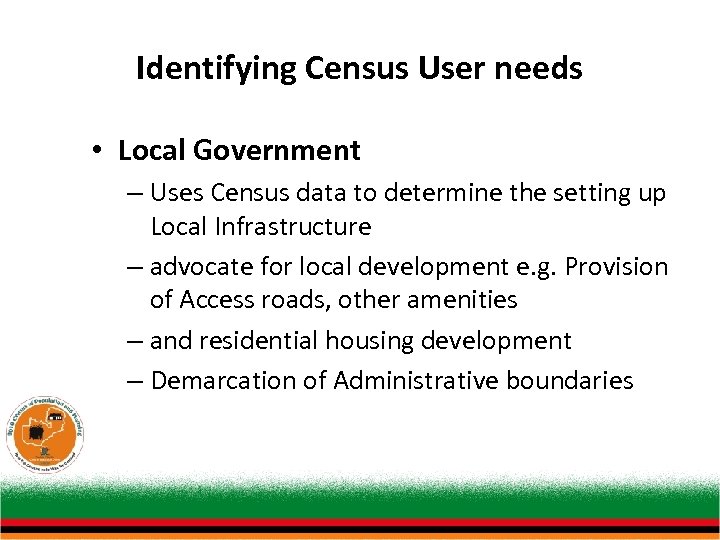 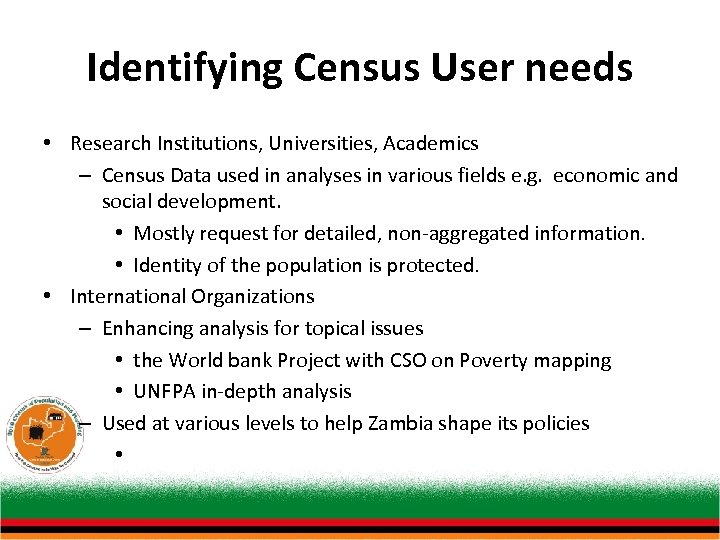 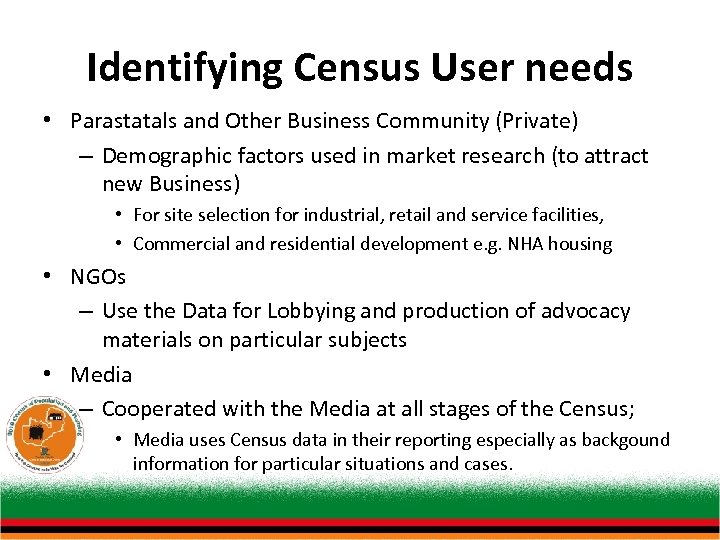 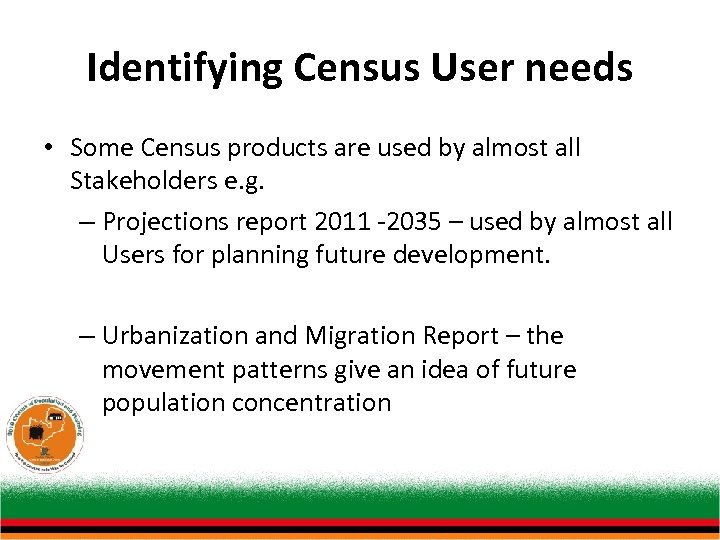 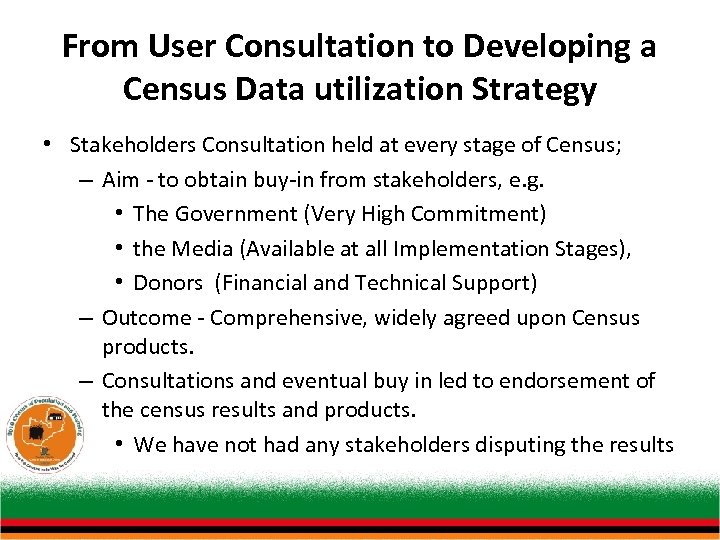 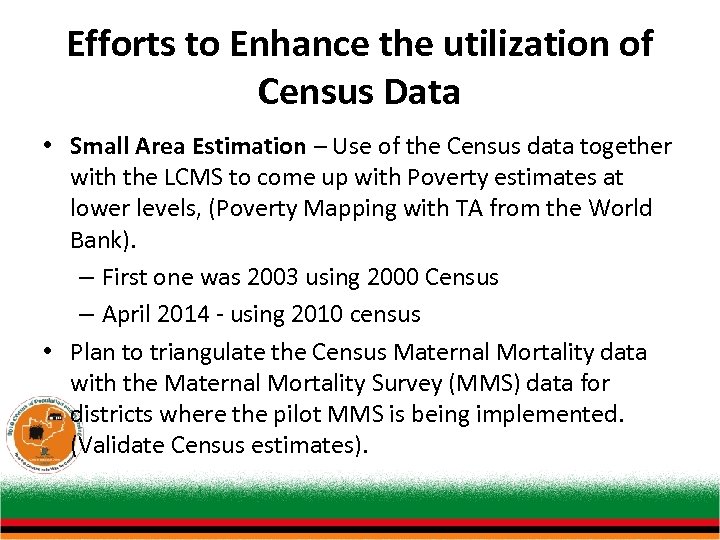 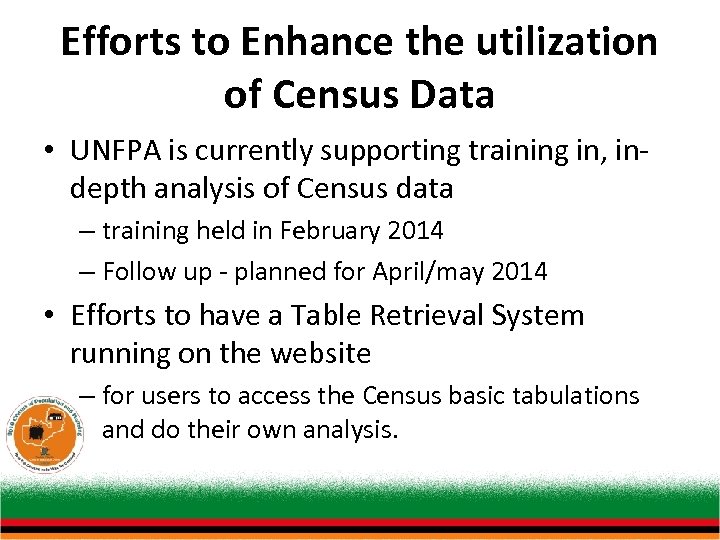 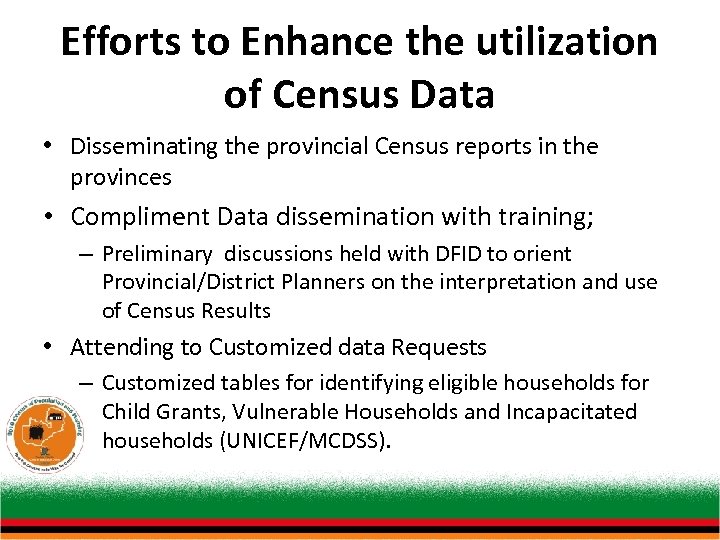 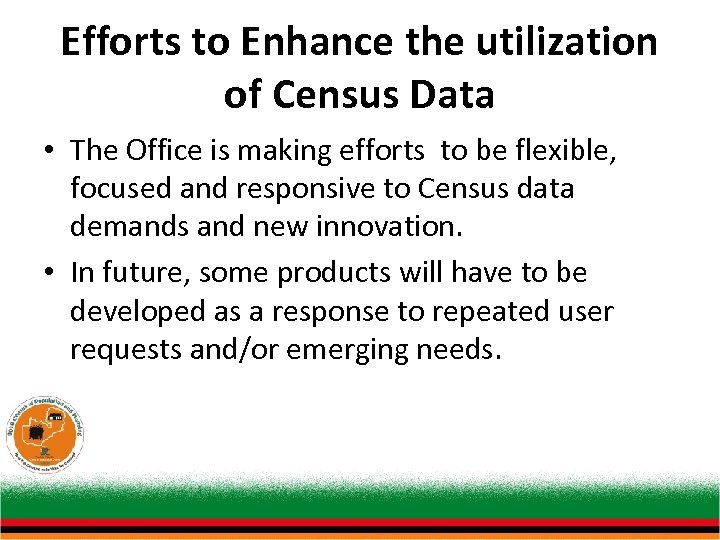 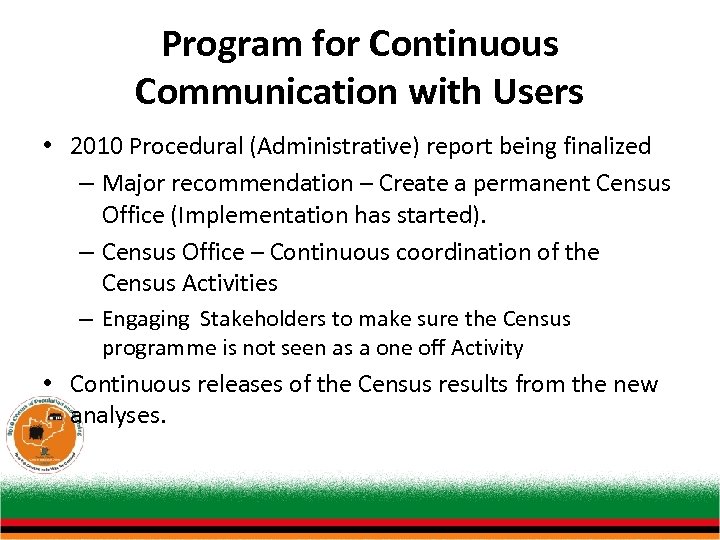 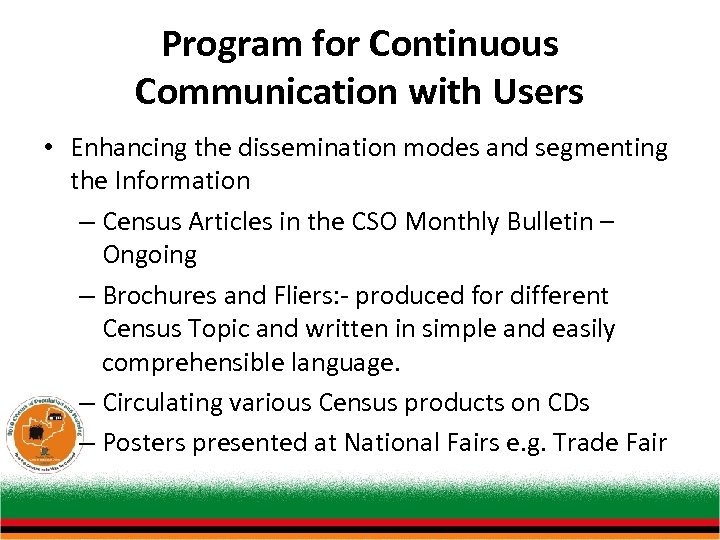 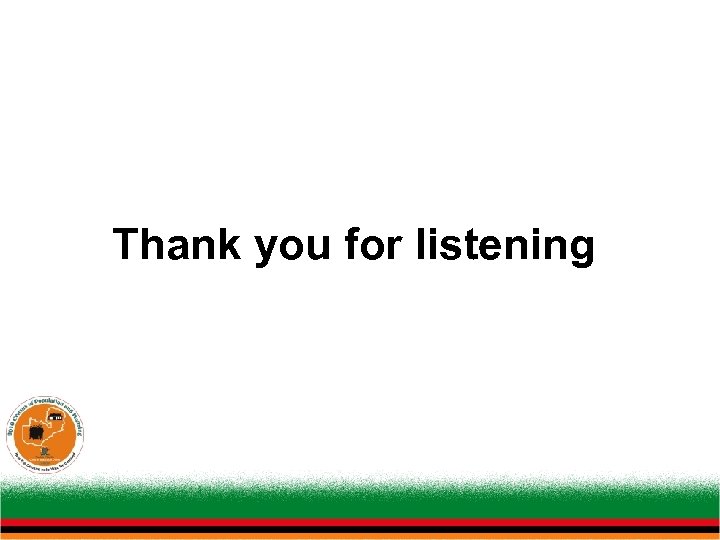 Identifying Census User needs • Parastatals and Other Business Community (Private) – Demographic factors used in market research (to attract new Business) • For site selection for industrial, retail and service facilities, • Commercial and residential development e. g. NHA housing • NGOs – Use the Data for Lobbying and production of advocacy materials on particular subjects • Media – Cooperated with the Media at all stages of the Census; • Media uses Census data in their reporting especially as backgound information for particular situations and cases.

Identifying Census User needs • Some Census products are used by almost all Stakeholders e. g. – Projections report 2011 -2035 – used by almost all Users for planning future development. – Urbanization and Migration Report – the movement patterns give an idea of future population concentration

From User Consultation to Developing a Census Data utilization Strategy • Stakeholders Consultation held at every stage of Census; – Aim - to obtain buy-in from stakeholders, e. g. • The Government (Very High Commitment) • the Media (Available at all Implementation Stages), • Donors (Financial and Technical Support) – Outcome - Comprehensive, widely agreed upon Census products. – Consultations and eventual buy in led to endorsement of the census results and products. • We have not had any stakeholders disputing the results

Efforts to Enhance the utilization of Census Data • Small Area Estimation – Use of the Census data together with the LCMS to come up with Poverty estimates at lower levels, (Poverty Mapping with TA from the World Bank). – First one was 2003 using 2000 Census – April 2014 - using 2010 census • Plan to triangulate the Census Maternal Mortality data with the Maternal Mortality Survey (MMS) data for districts where the pilot MMS is being implemented. (Validate Census estimates).

Efforts to Enhance the utilization of Census Data • UNFPA is currently supporting training in, indepth analysis of Census data – training held in February 2014 – Follow up - planned for April/may 2014 • Efforts to have a Table Retrieval System running on the website – for users to access the Census basic tabulations and do their own analysis.

Efforts to Enhance the utilization of Census Data • Disseminating the provincial Census reports in the provinces • Compliment Data dissemination with training; – Preliminary discussions held with DFID to orient Provincial/District Planners on the interpretation and use of Census Results • Attending to Customized data Requests – Customized tables for identifying eligible households for Child Grants, Vulnerable Households and Incapacitated households (UNICEF/MCDSS).

Efforts to Enhance the utilization of Census Data • The Office is making efforts to be flexible, focused and responsive to Census data demands and new innovation. • In future, some products will have to be developed as a response to repeated user requests and/or emerging needs.

Program for Continuous Communication with Users • 2010 Procedural (Administrative) report being finalized – Major recommendation – Create a permanent Census Office (Implementation has started). – Census Office – Continuous coordination of the Census Activities – Engaging Stakeholders to make sure the Census programme is not seen as a one off Activity • Continuous releases of the Census results from the new analyses.

Thank you for listening