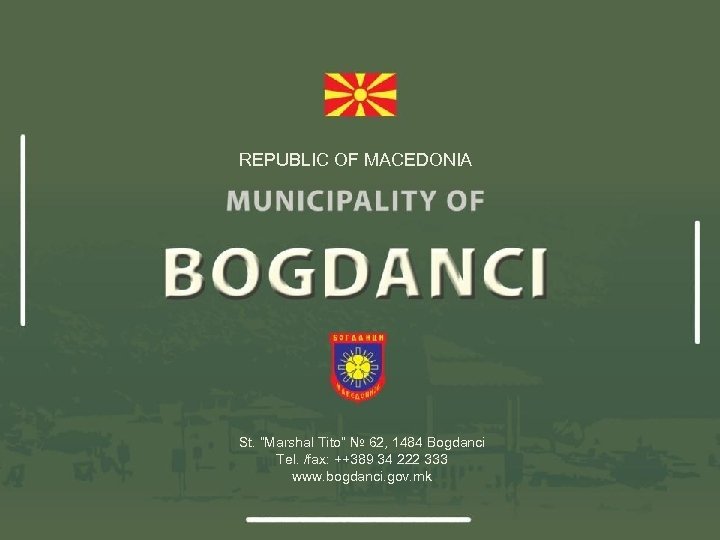 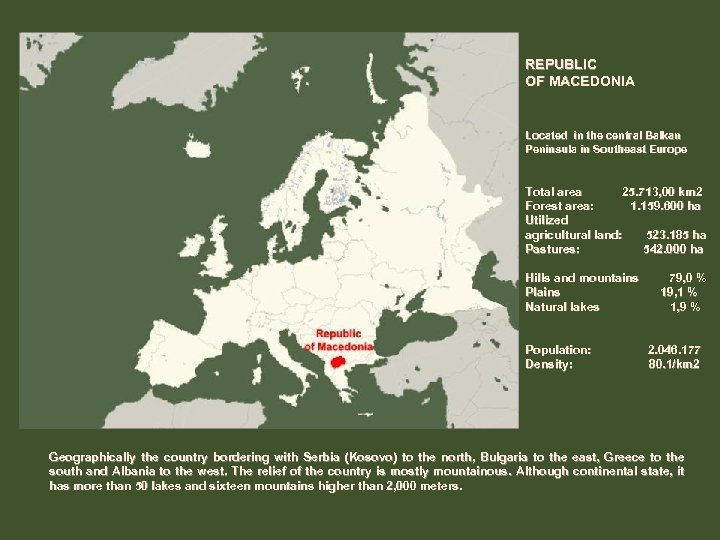 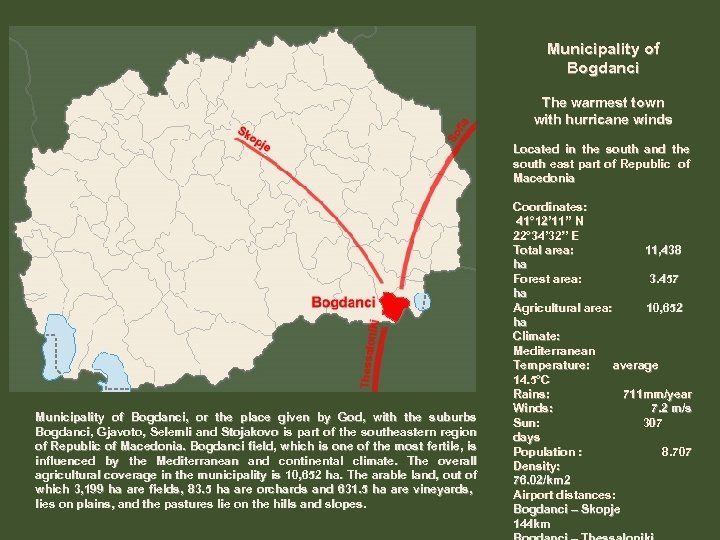 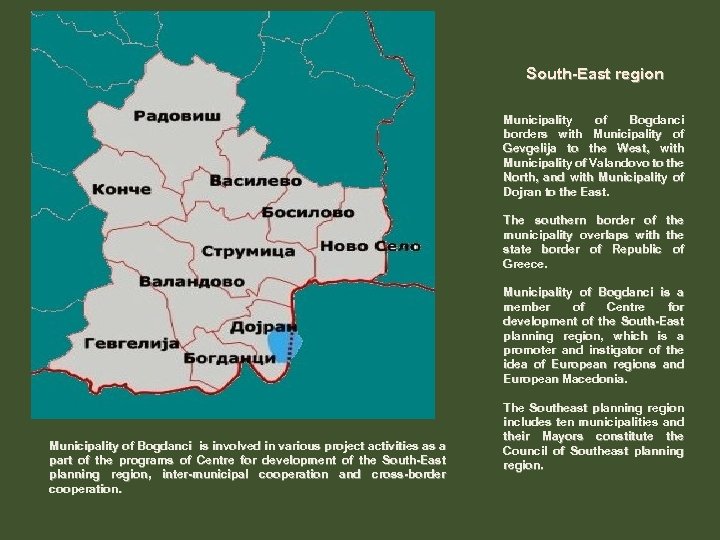 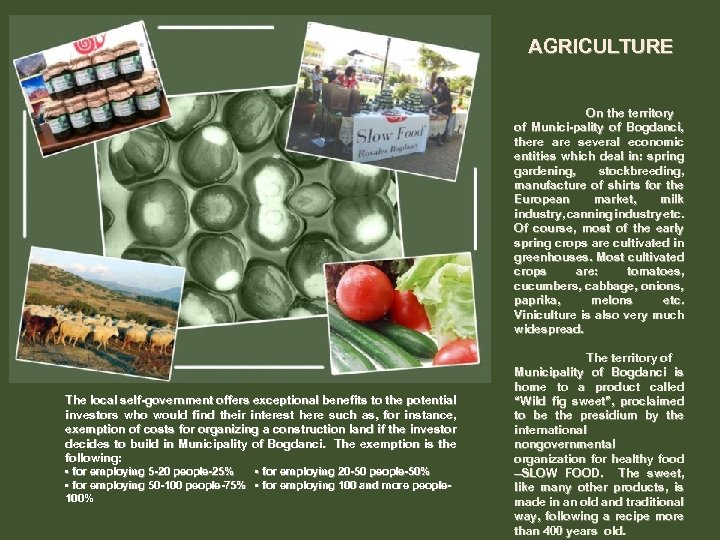 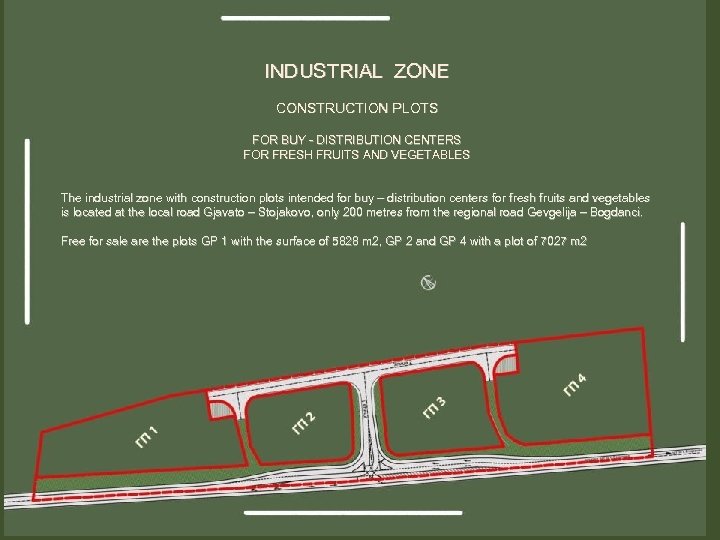 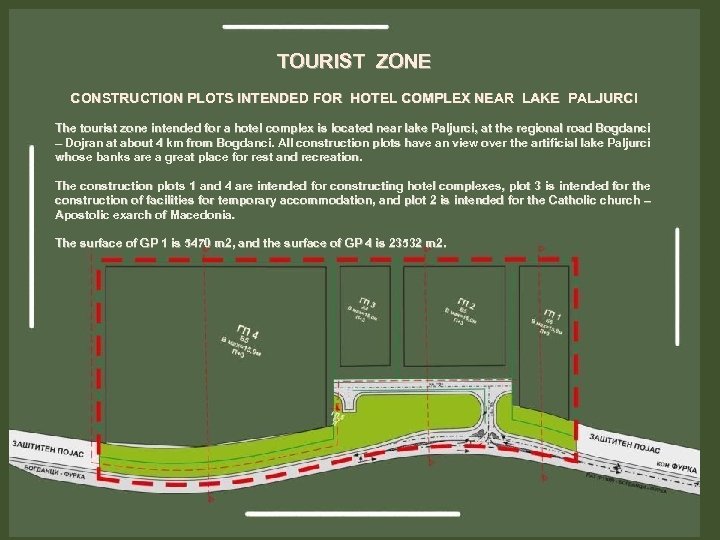 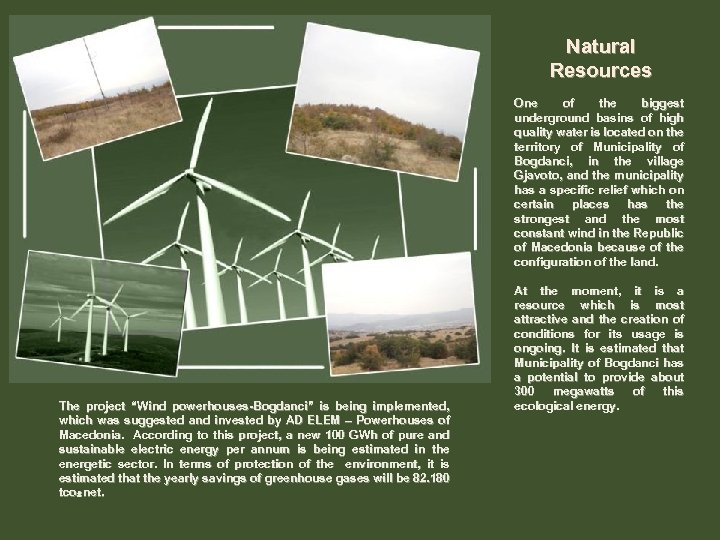 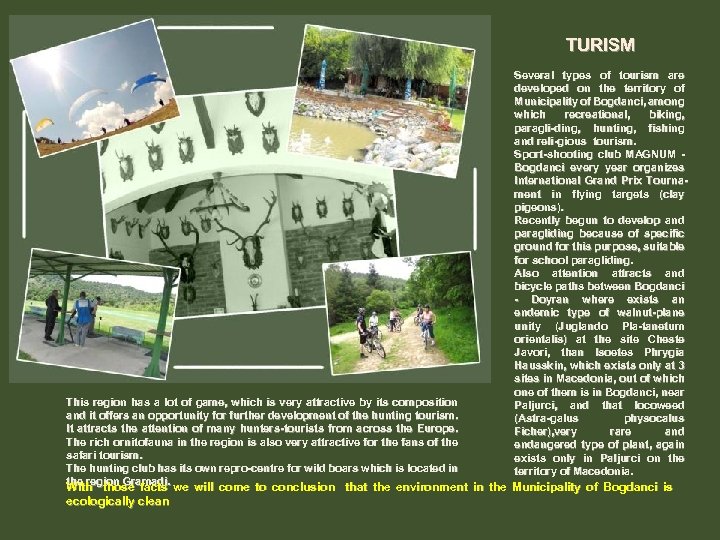 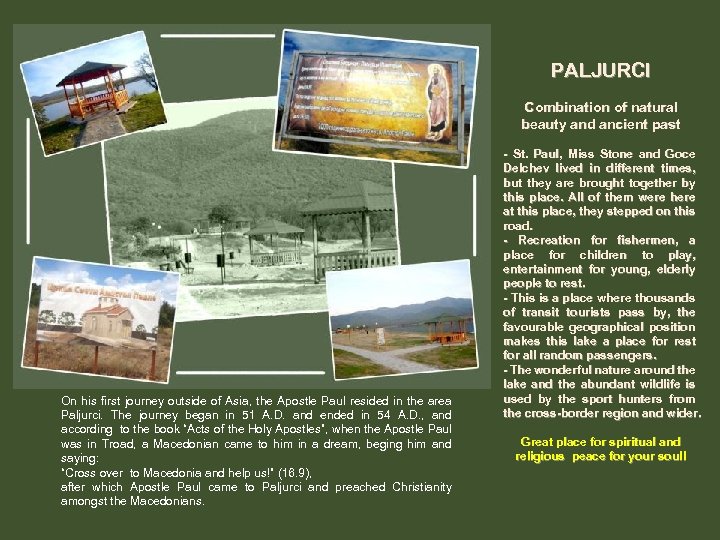 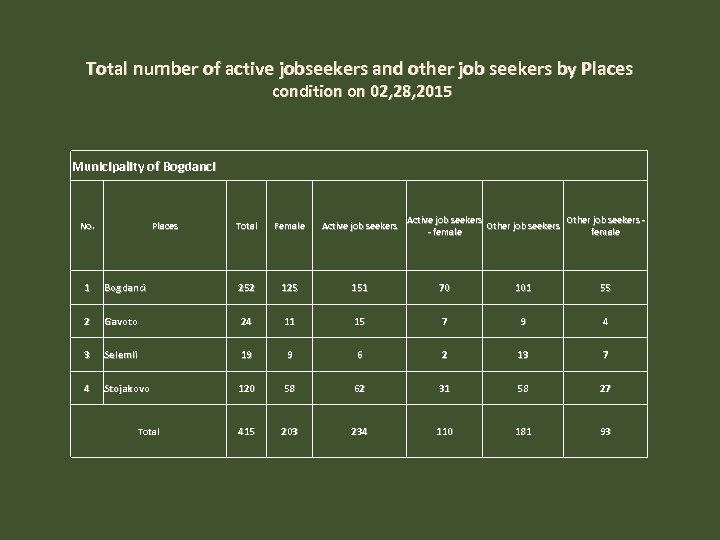 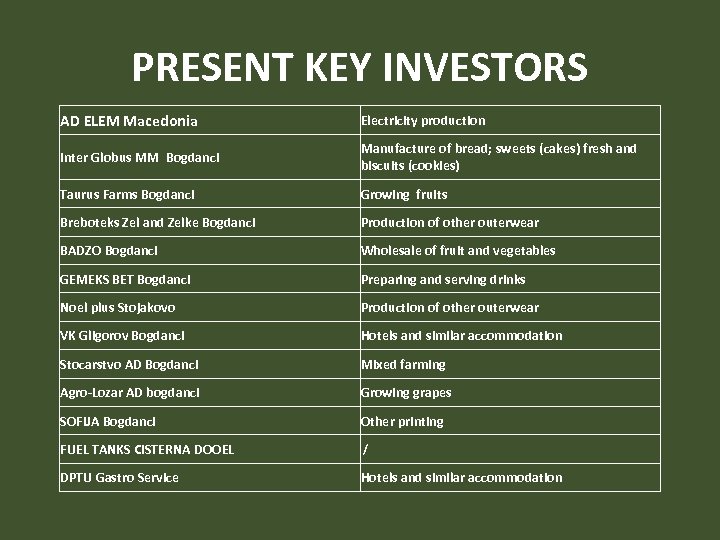 Municipality of Bogdanci The warmest town with hurricane winds Located in the south and the south east part of Republic of Macedonia Municipality of Bogdanci, or the place given by God, with the suburbs Bogdanci, Gjavoto, Selemli and Stojakovo is part of the southeastern region of Republic of Macedonia. Bogdanci field, which is one of the most fertile, is influenced by the Mediterranean and continental climate. The overall agricultural coverage in the municipality is 10, 652 ha. The arable land, out of which 3, 199 ha are fields, 83. 5 ha are orchards and 631. 5 ha are vineyards, lies on plains, and the pastures lie on the hills and slopes. Coordinates: 41° 12’ 11’’ N 22° 34’ 32’’ E Total area: 11, 438 area: ha Forest area: 3. 457 ha Agricultural area: 10, 652 ha Climate: Mediterranean Temperature: average 14. 5°C Rains: 711 mm/year Winds: 7. 2 m/s Sun: 307 days Population : 8. 707 Density: 76. 02/km 2 Airport distances: Bogdanci – Skopje 144 km

AGRICULTURE On the territory of Munici-pality of Bogdanci, there are several economic entities which deal in: spring gardening, stockbreeding, manufacture of shirts for the European market, milk industry, canning industry etc. Of course, most of the early spring crops are cultivated in greenhouses. Most cultivated crops are: tomatoes, cucumbers, cabbage, onions, paprika, melons etc. Viniculture is also very much widespread. The local self-government offers exceptional benefits to the potential investors who would find their interest here such as, for instance, exemption of costs for organizing a construction land if the investor decides to build in Municipality of Bogdanci. The exemption is the following: • for employing 5 -20 people-25% • for employing 20 -50 people-50% • for employing 50 -100 people-75% • for employing 100 and more people 100% The territory of Municipality of Bogdanci is home to a product called “Wild fig sweet”, proclaimed to be the presidium by the international nongovernmental organization for healthy food –SLOW FOOD. The sweet, like many other products, is made in an old and traditional way, following a recipe more than 400 years old.

TOURIST ZONE CONSTRUCTION PLOTS INTENDED FOR HOTEL COMPLEX NEAR LAKE PALJURCI The tourist zone intended for a hotel complex is located near lake Paljurci, at the regional road Bogdanci – Dojran at about 4 km from Bogdanci. All construction plots have an view over the artificial lake Paljurci whose banks are a great place for rest and recreation. The construction plots 1 and 4 are intended for constructing hotel complexes, plot 3 is intended for the construction of facilities for temporary accommodation, and plot 2 is intended for the Catholic church – Apostolic exarch of Macedonia. The surface of GP 1 is 5470 m 2, and the surface of GP 4 is 23532 m 2.

Natural Resources One of the biggest underground basins of high quality water is located on the territory of Municipality of Bogdanci, in the village Gjavoto, and the municipality has a specific relief which on certain places has the strongest and the most constant wind in the Republic of Macedonia because of the configuration of the land. The project “Wind powerhouses-Bogdanci” is being implemented, which was suggested and invested by AD ELEM – Powerhouses of Macedonia. According to this project, a new 100 GWh of pure and sustainable electric energy per annum is being estimated in the energetic sector. In terms of protection of the environment, it is estimated that the yearly savings of greenhouse gases will be 82. 180 tco₂net. tco₂ At the moment, it is a resource which is most attractive and the creation of conditions for its usage is ongoing. It is estimated that Municipality of Bogdanci has a potential to provide about 300 megawatts of this ecological energy.

TURISM Several types of tourism are developed on the territory of Municipality of Bogdanci, among which recreational, biking, paragli-ding, hunting, fishing and reli-gious tourism. Sport-shooting club MAGNUM Bogdanci every year organizes International Grand Prix Tournament in flying targets (clay pigeons). Recently begun to develop and paragliding because of specific ground for this purpose, suitable for school paragliding. Also attention attracts and bicycle paths between Bogdanci - Doyran where exists an endemic type of walnut-plane unity (Juglando Pla-tanetum orientalis) at the site Cheste Javori, than Isoetes Phrygia Hausskin, which exists only at 3 sites in Macedonia, out of which one of them is in Bogdanci, near Paljurci, and that locoweed (Astra-galus physocalus Ficher), very rare and endangered type of plant, again exists only in Paljurci on the territory of Macedonia. This region has a lot of game, which is very attractive by its composition and it offers an opportunity for further development of the hunting tourism. It attracts the attention of many hunters-tourists from across the Europe. The rich ornitofauna in the region is also very attractive for the fans of the safari tourism. The hunting club has its own repro-centre for wild boars which is located in the region Gramadi. With those facts we will come to conclusion that the environment in the Municipality of Bogdanci is ecologically clean

PALJURCI Combination of natural beauty and ancient past On his first journey outside of Asia, the Apostle Paul resided in the area Paljurci. The journey began in 51 A. D. and ended in 54 A. D. , and according to the book “Acts of the Holy Apostles”, when the Apostle Paul was in Troad, a Macedonian came to him in a dream, beging him and saying: “Cross over to Macedonia and help us!” (16. 9), after which Apostle Paul came to Paljurci and preached Christianity amongst the Macedonians. - St. Paul, Miss Stone and Goce Delchev lived in different times, but they are brought together by this place. All of them were here at this place, they stepped on this road. - Recreation for fishermen, a place for children to play, entertainment for young, elderly people to rest. - This is a place where thousands of transit tourists pass by, the favourable geographical position makes this lake a place for rest for all random passengers. - The wonderful nature around the lake and the abundant wildlife is used by the sport hunters from the cross-border region and wider. Great place for spiritual and religious peace for your soul!