REPORT OF THE PRESIDENT of the COMMISSION FOR 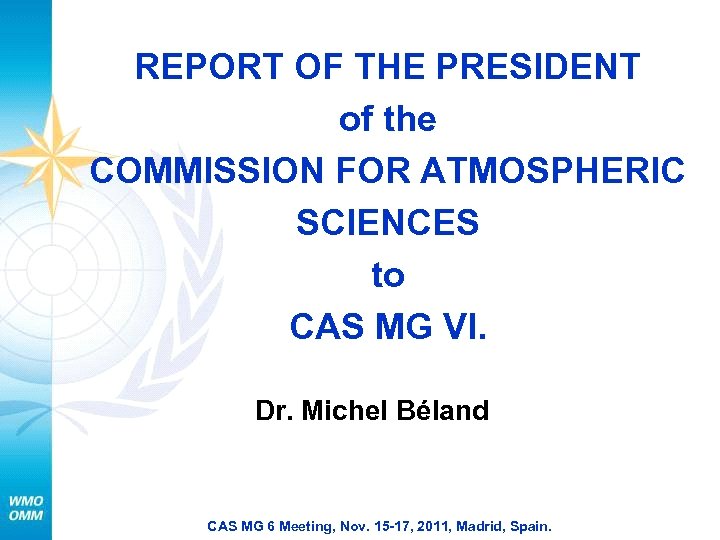 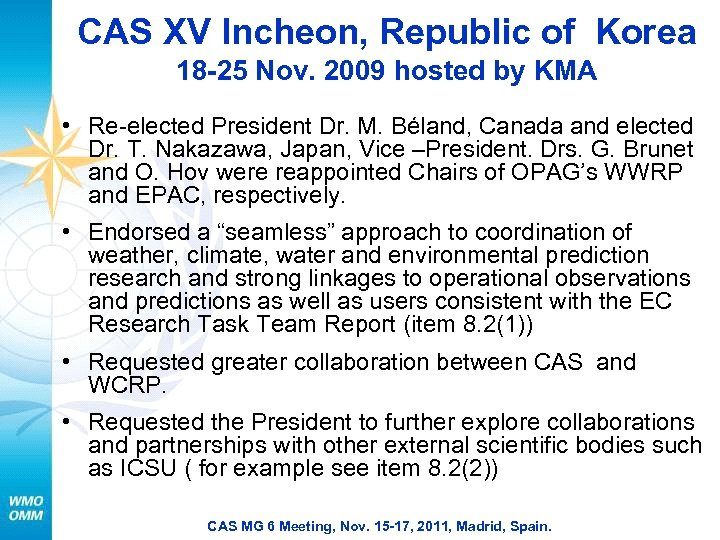 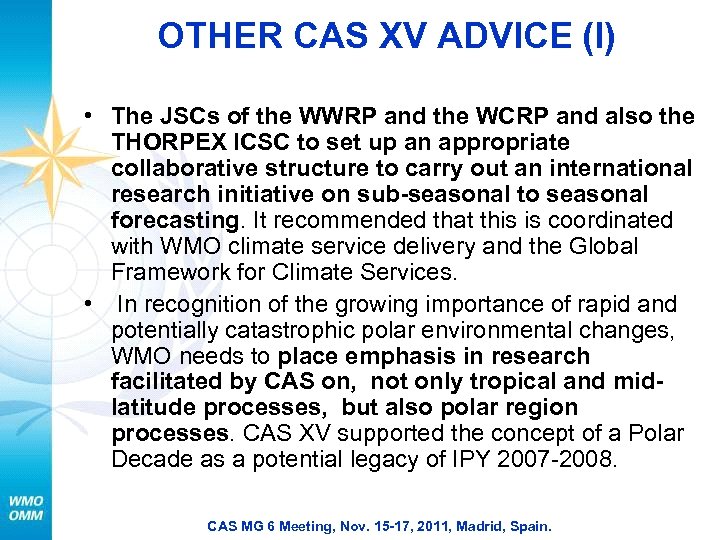 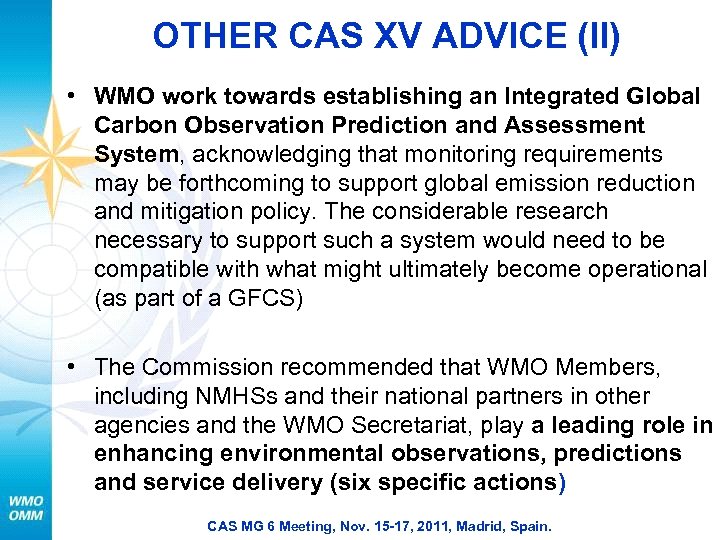 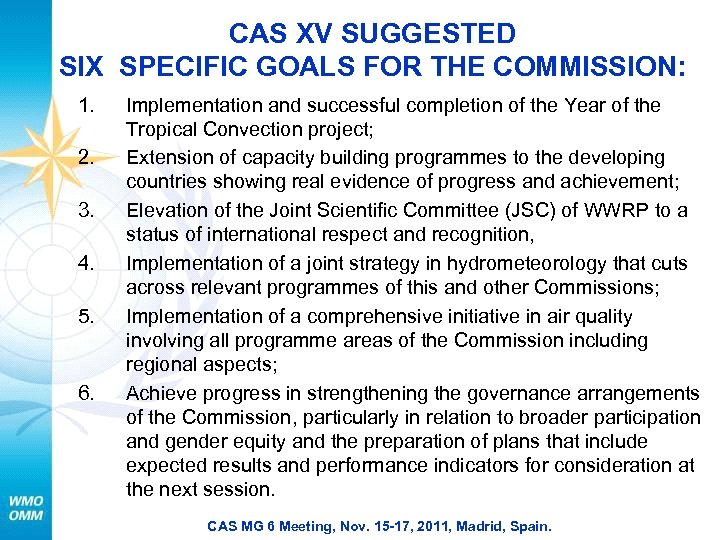 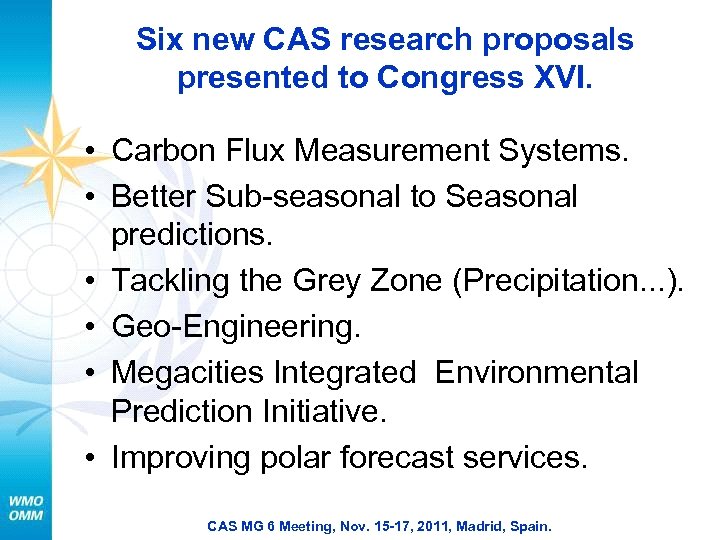 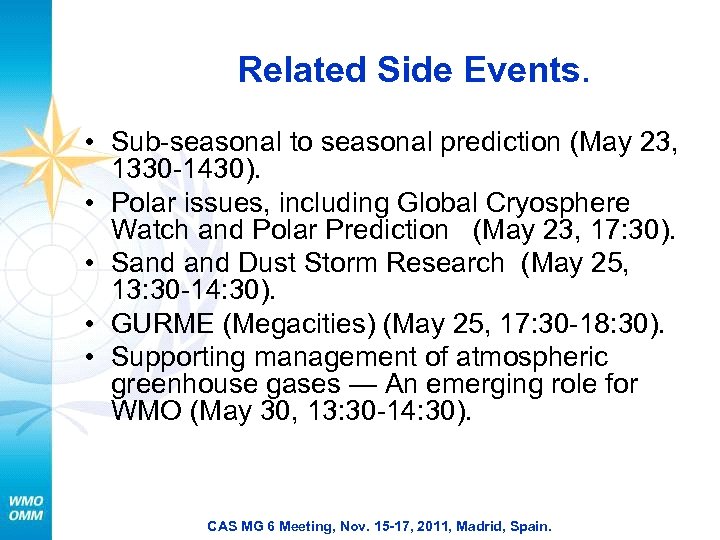 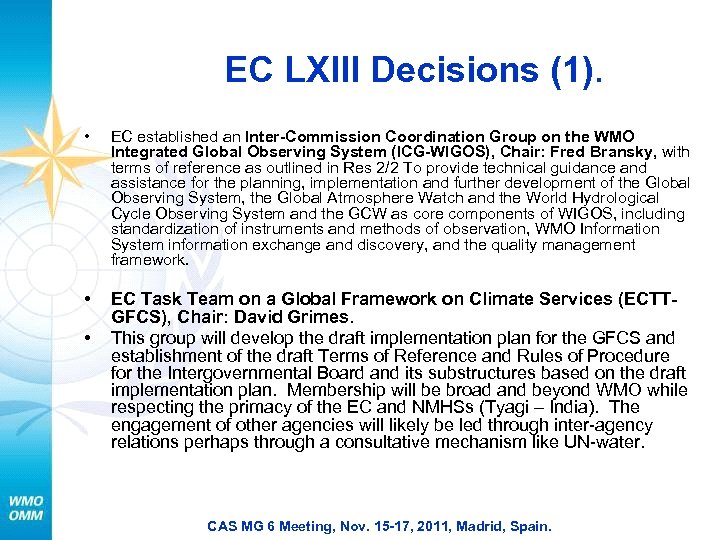 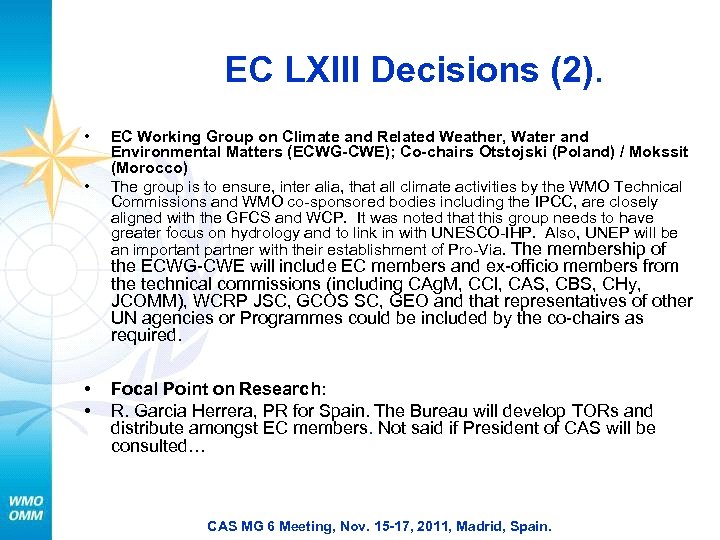 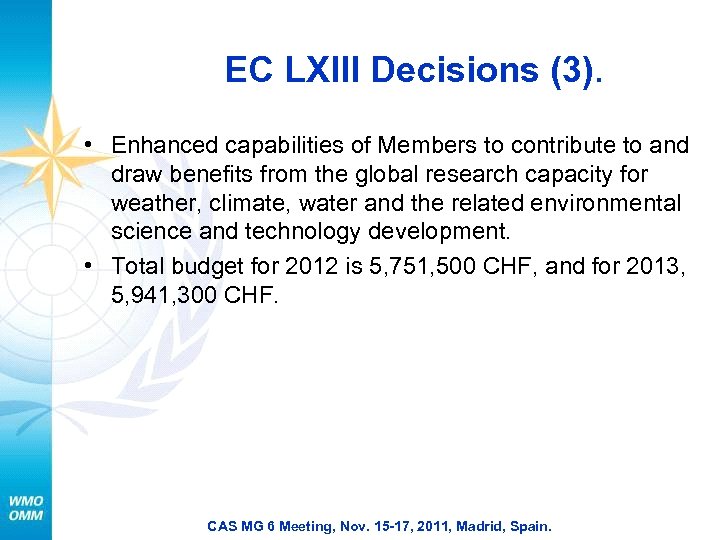 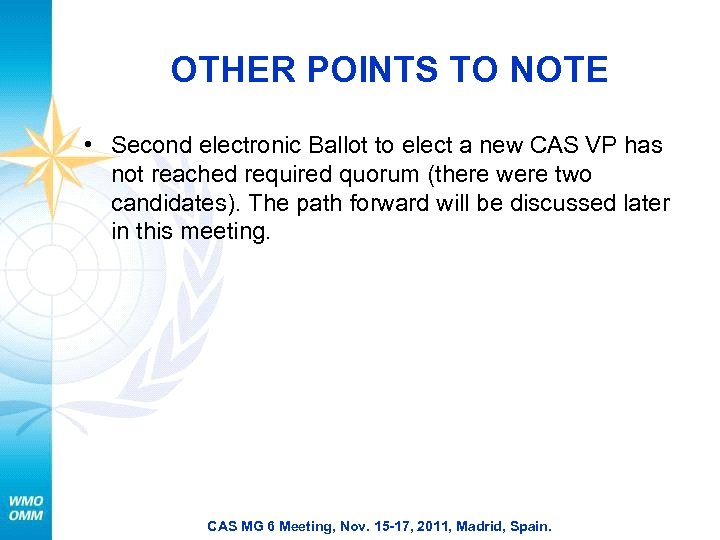 Скачать презентацию REPORT OF THE PRESIDENT of the COMMISSION FOR

OTHER CAS XV ADVICE (I) • The JSCs of the WWRP and the WCRP and also the THORPEX ICSC to set up an appropriate collaborative structure to carry out an international research initiative on sub-seasonal to seasonal forecasting. It recommended that this is coordinated with WMO climate service delivery and the Global Framework for Climate Services. • In recognition of the growing importance of rapid and potentially catastrophic polar environmental changes, WMO needs to place emphasis in research facilitated by CAS on, not only tropical and midlatitude processes, but also polar region processes. CAS XV supported the concept of a Polar Decade as a potential legacy of IPY 2007 -2008. CAS MG 6 Meeting, Nov. 15 -17, 2011, Madrid, Spain.

OTHER CAS XV ADVICE (II) • WMO work towards establishing an Integrated Global Carbon Observation Prediction and Assessment System, acknowledging that monitoring requirements may be forthcoming to support global emission reduction and mitigation policy. The considerable research necessary to support such a system would need to be compatible with what might ultimately become operational (as part of a GFCS) • The Commission recommended that WMO Members, including NMHSs and their national partners in other agencies and the WMO Secretariat, play a leading role in enhancing environmental observations, predictions and service delivery (six specific actions) CAS MG 6 Meeting, Nov. 15 -17, 2011, Madrid, Spain.

CAS XV SUGGESTED SIX SPECIFIC GOALS FOR THE COMMISSION: 1. 2. 3. 4. 5. 6. Implementation and successful completion of the Year of the Tropical Convection project; Extension of capacity building programmes to the developing countries showing real evidence of progress and achievement; Elevation of the Joint Scientific Committee (JSC) of WWRP to a status of international respect and recognition, Implementation of a joint strategy in hydrometeorology that cuts across relevant programmes of this and other Commissions; Implementation of a comprehensive initiative in air quality involving all programme areas of the Commission including regional aspects; Achieve progress in strengthening the governance arrangements of the Commission, particularly in relation to broader participation and gender equity and the preparation of plans that include expected results and performance indicators for consideration at the next session. CAS MG 6 Meeting, Nov. 15 -17, 2011, Madrid, Spain.

EC LXIII Decisions (1). • EC established an Inter-Commission Coordination Group on the WMO Integrated Global Observing System (ICG-WIGOS), Chair: Fred Bransky, with terms of reference as outlined in Res 2/2 To provide technical guidance and assistance for the planning, implementation and further development of the Global Observing System, the Global Atmosphere Watch and the World Hydrological Cycle Observing System and the GCW as core components of WIGOS, including standardization of instruments and methods of observation, WMO Information System information exchange and discovery, and the quality management framework. • EC Task Team on a Global Framework on Climate Services (ECTTGFCS), Chair: David Grimes. This group will develop the draft implementation plan for the GFCS and establishment of the draft Terms of Reference and Rules of Procedure for the Intergovernmental Board and its substructures based on the draft implementation plan. Membership will be broad and beyond WMO while respecting the primacy of the EC and NMHSs (Tyagi – India). The engagement of other agencies will likely be led through inter-agency relations perhaps through a consultative mechanism like UN-water. • CAS MG 6 Meeting, Nov. 15 -17, 2011, Madrid, Spain.

EC LXIII Decisions (2). • • EC Working Group on Climate and Related Weather, Water and Environmental Matters (ECWG-CWE); Co-chairs Otstojski (Poland) / Mokssit (Morocco) The group is to ensure, inter alia, that all climate activities by the WMO Technical Commissions and WMO co-sponsored bodies including the IPCC, are closely aligned with the GFCS and WCP. It was noted that this group needs to have greater focus on hydrology and to link in with UNESCO-IHP. Also, UNEP will be an important partner with their establishment of Pro-Via. The membership of the ECWG-CWE will include EC members and ex-officio members from the technical commissions (including CAg. M, CCl, CAS, CBS, CHy, JCOMM), WCRP JSC, GCOS SC, GEO and that representatives of other UN agencies or Programmes could be included by the co-chairs as required. • • Focal Point on Research: R. Garcia Herrera, PR for Spain. The Bureau will develop TORs and distribute amongst EC members. Not said if President of CAS will be consulted… CAS MG 6 Meeting, Nov. 15 -17, 2011, Madrid, Spain.

OTHER POINTS TO NOTE • Second electronic Ballot to elect a new CAS VP has not reached required quorum (there were two candidates). The path forward will be discussed later in this meeting. CAS MG 6 Meeting, Nov. 15 -17, 2011, Madrid, Spain.