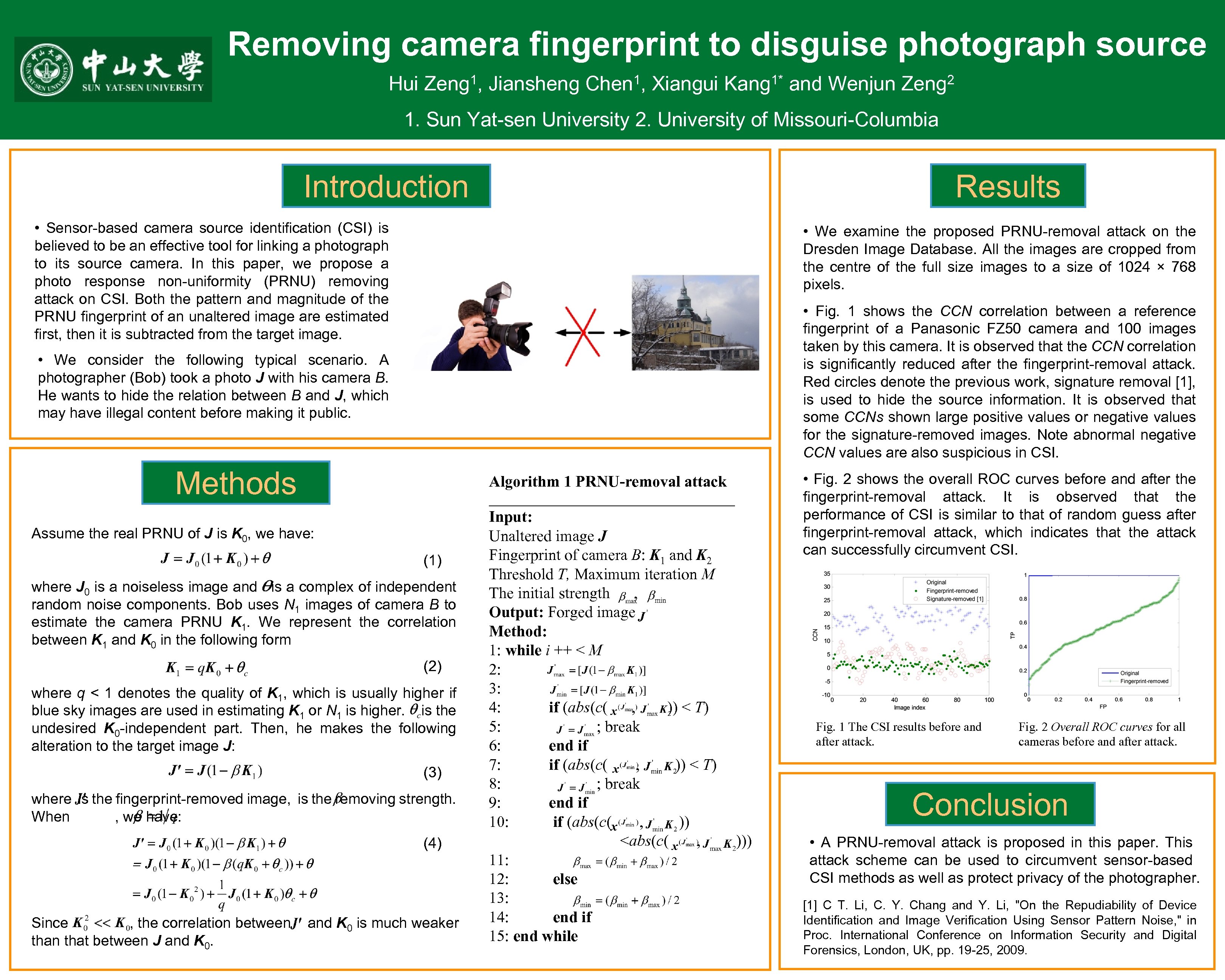 Removing camera fingerprint to disguise photograph source Hui 1, Zeng Jiansheng 1, Chen Xiangui 1* Kang and Wenjun 2 Zeng 1. Sun Yat-sen University 2. University of Missouri-Columbia Results Introduction • Sensor-based camera source identification (CSI) is believed to be an effective tool for linking a photograph to its source camera. In this paper, we propose a photo response non-uniformity (PRNU) removing attack on CSI. Both the pattern and magnitude of the PRNU fingerprint of an unaltered image are estimated first, then it is subtracted from the target image. • We examine the proposed PRNU-removal attack on the Dresden Image Database. All the images are cropped from the centre of the full size images to a size of 1024 × 768 pixels. • Fig. 1 shows the CCN correlation between a reference fingerprint of a Panasonic FZ 50 camera and 100 images taken by this camera. It is observed that the CCN correlation is significantly reduced after the fingerprint-removal attack. Red circles denote the previous work, signature removal [1], is used to hide the source information. It is observed that some CCNs shown large positive values or negative values for the signature-removed images. Note abnormal negative CCN values are also suspicious in CSI. • We consider the following typical scenario. A photographer (Bob) took a photo J with his camera B. He wants to hide the relation between B and J, which may have illegal content before making it public. Methods Assume the real PRNU of J is K 0, we have: (1) where J 0 is a noiseless image and is a complex of independent random noise components. Bob uses N 1 images of camera B to estimate the camera PRNU K 1. We represent the correlation between K 1 and K 0 in the following form (2) where q < 1 denotes the quality of K 1, which is usually higher if blue sky images are used in estimating K 1 or N 1 is higher. is the undesired K 0 -independent part. Then, he makes the following alteration to the target image J: (3) where is the fingerprint-removed image, is the removing strength. When , we have: (4) Since , the correlation between that between J and K 0 is much weaker Algorithm 1 PRNU-removal attack ________________ Input: Unaltered image J Fingerprint of camera B: K 1 and K 2 Threshold T, Maximum iteration M The initial strength , Output: Forged image Method: 1: while i ++ < M 2: 3: 4: if (abs(c( , )) < T) 5: ; break 6: end if 7: if (abs(c( , )) < T) 8: ; break 9: end if 10: if (abs(c( , ))