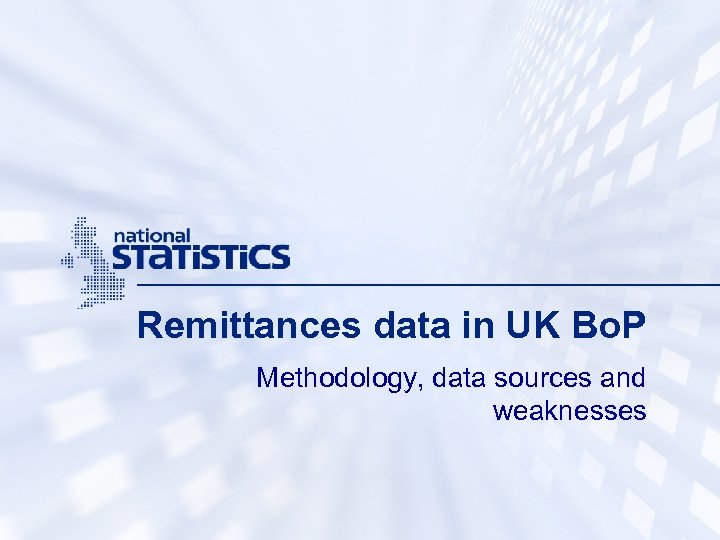 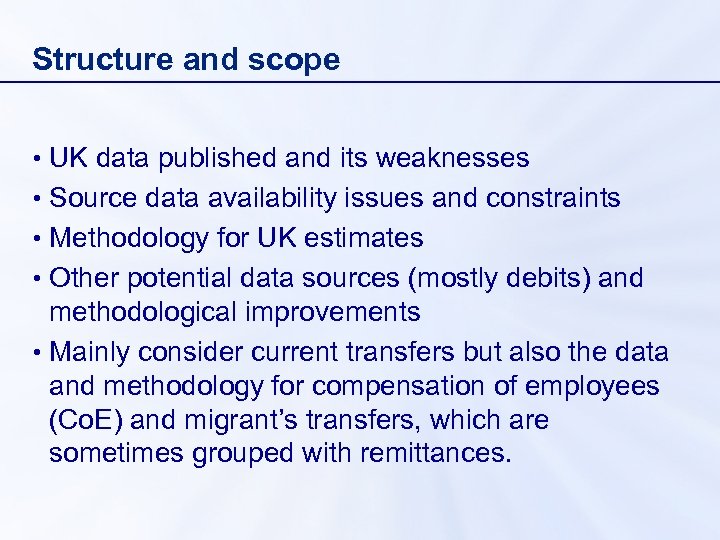 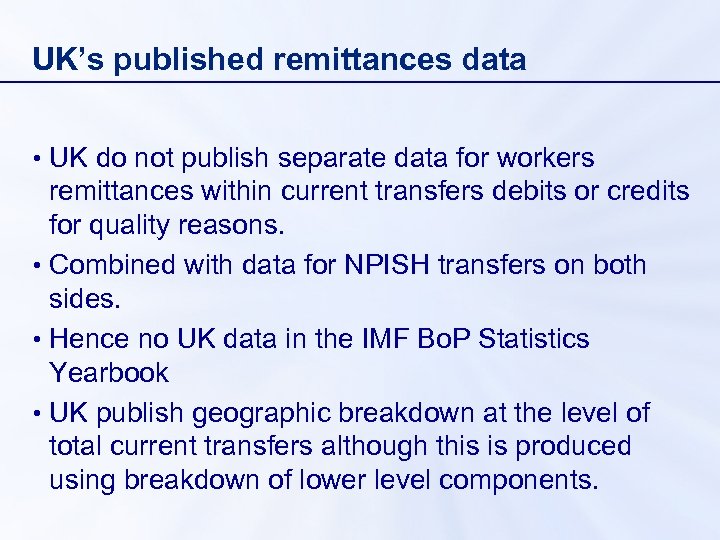 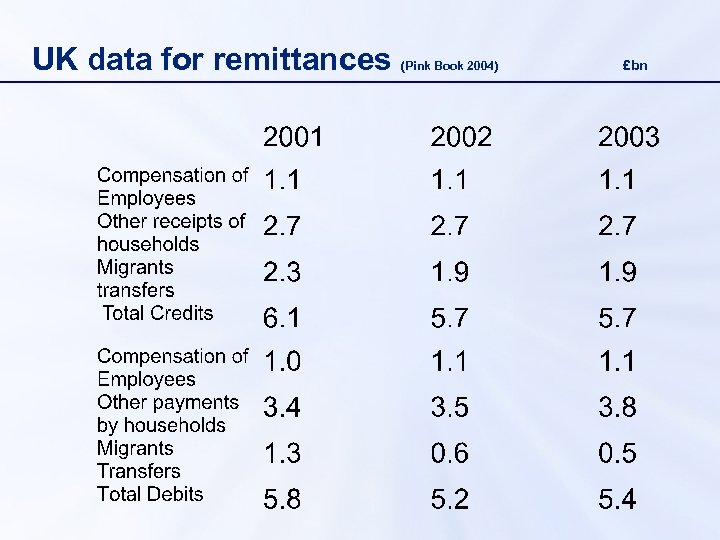 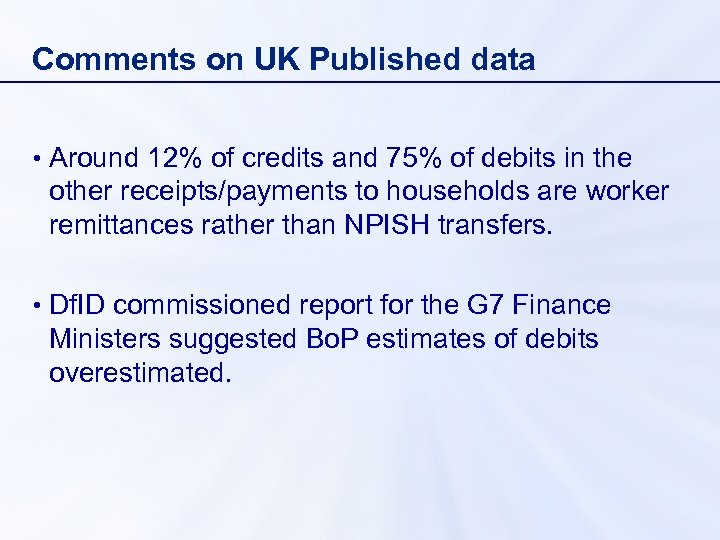 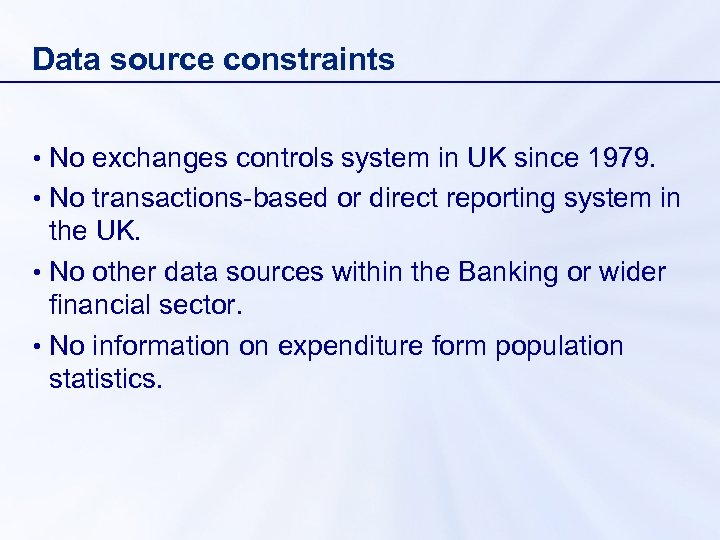 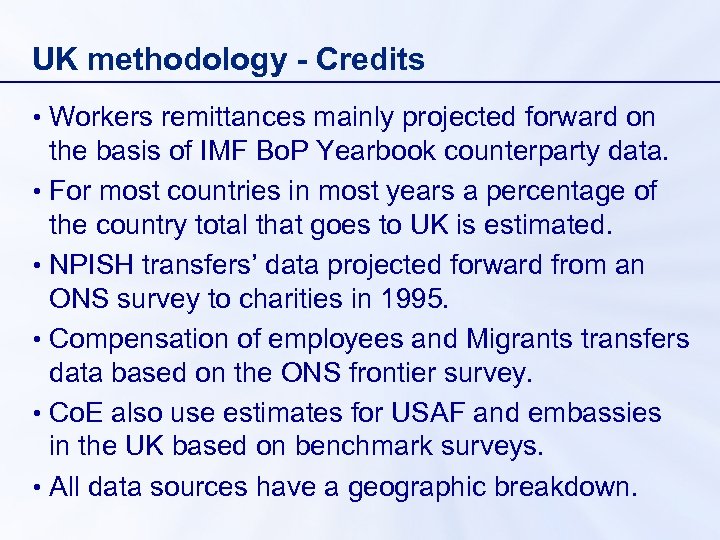 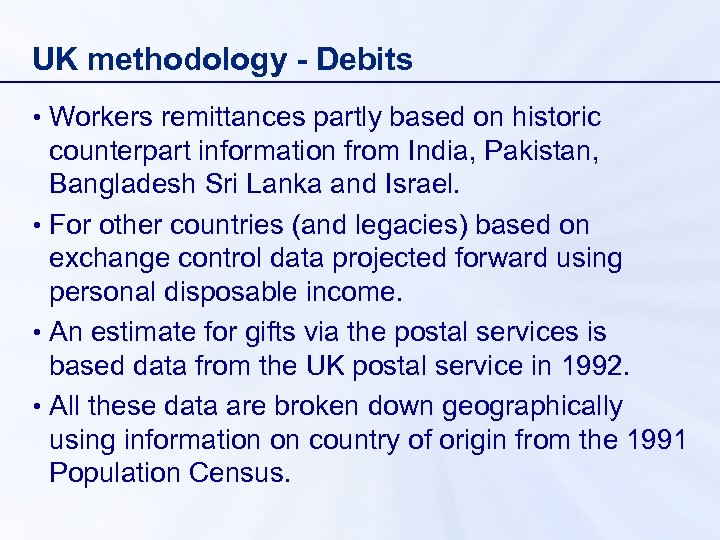 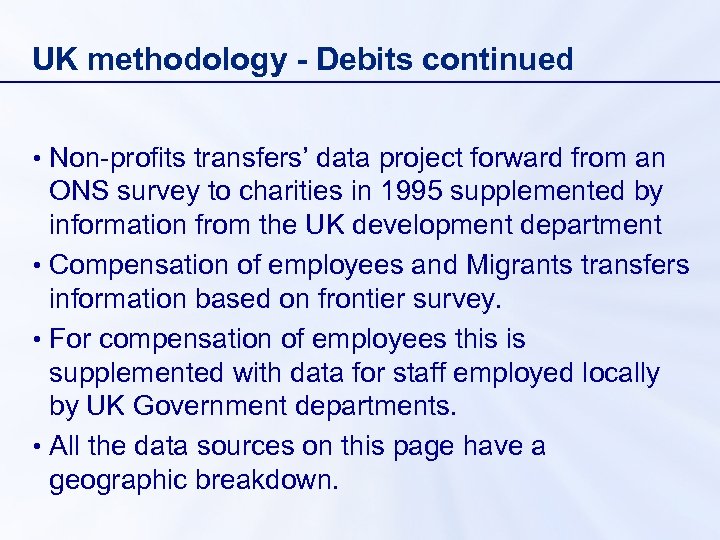 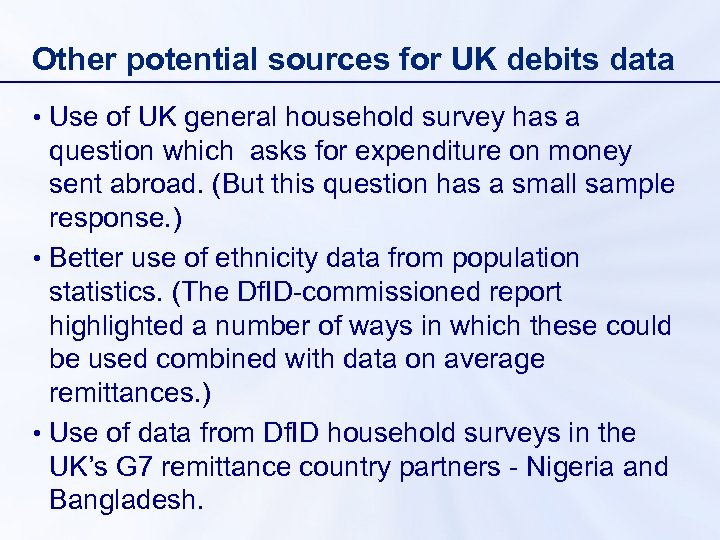 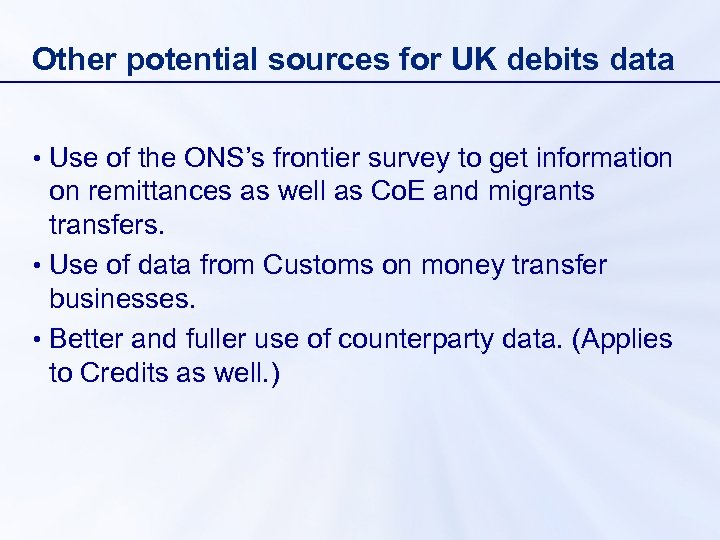 Structure and scope • UK data published and its weaknesses • Source data availability issues and constraints • Methodology for UK estimates • Other potential data sources (mostly debits) and methodological improvements • Mainly consider current transfers but also the data and methodology for compensation of employees (Co. E) and migrant’s transfers, which are sometimes grouped with remittances.

UK’s published remittances data • UK do not publish separate data for workers remittances within current transfers debits or credits for quality reasons. • Combined with data for NPISH transfers on both sides. • Hence no UK data in the IMF Bo. P Statistics Yearbook • UK publish geographic breakdown at the level of total current transfers although this is produced using breakdown of lower level components.

Comments on UK Published data • Around 12% of credits and 75% of debits in the other receipts/payments to households are worker remittances rather than NPISH transfers. • Df. ID commissioned report for the G 7 Finance Ministers suggested Bo. P estimates of debits overestimated.

Data source constraints • No exchanges controls system in UK since 1979. • No transactions-based or direct reporting system in the UK. • No other data sources within the Banking or wider financial sector. • No information on expenditure form population statistics.

UK methodology - Credits • Workers remittances mainly projected forward on the basis of IMF Bo. P Yearbook counterparty data. • For most countries in most years a percentage of the country total that goes to UK is estimated. • NPISH transfers’ data projected forward from an ONS survey to charities in 1995. • Compensation of employees and Migrants transfers data based on the ONS frontier survey. • Co. E also use estimates for USAF and embassies in the UK based on benchmark surveys. • All data sources have a geographic breakdown.

UK methodology - Debits • Workers remittances partly based on historic counterpart information from India, Pakistan, Bangladesh Sri Lanka and Israel. • For other countries (and legacies) based on exchange control data projected forward using personal disposable income. • An estimate for gifts via the postal services is based data from the UK postal service in 1992. • All these data are broken down geographically using information on country of origin from the 1991 Population Census.

UK methodology - Debits continued • Non-profits transfers’ data project forward from an ONS survey to charities in 1995 supplemented by information from the UK development department • Compensation of employees and Migrants transfers information based on frontier survey. • For compensation of employees this is supplemented with data for staff employed locally by UK Government departments. • All the data sources on this page have a geographic breakdown.

Other potential sources for UK debits data • Use of UK general household survey has a question which asks for expenditure on money sent abroad. (But this question has a small sample response. ) • Better use of ethnicity data from population statistics. (The Df. ID-commissioned report highlighted a number of ways in which these could be used combined with data on average remittances. ) • Use of data from Df. ID household surveys in the UK’s G 7 remittance country partners - Nigeria and Bangladesh.

Other potential sources for UK debits data • Use of the ONS’s frontier survey to get information on remittances as well as Co. E and migrants transfers. • Use of data from Customs on money transfer businesses. • Better and fuller use of counterparty data. (Applies to Credits as well. )