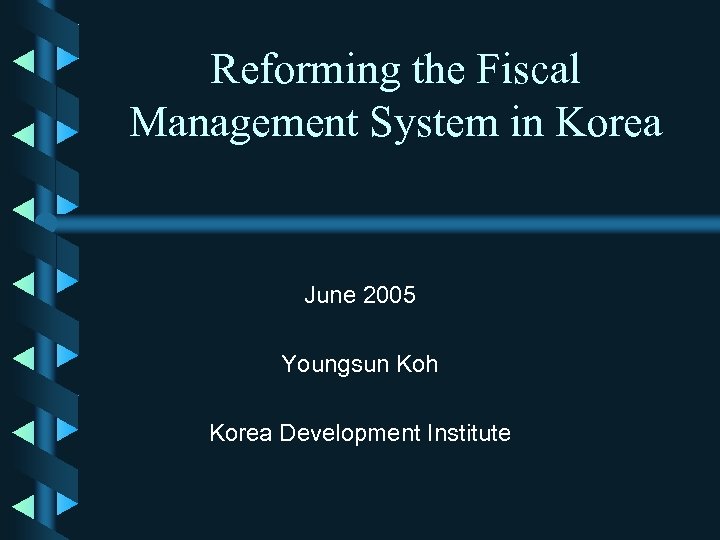 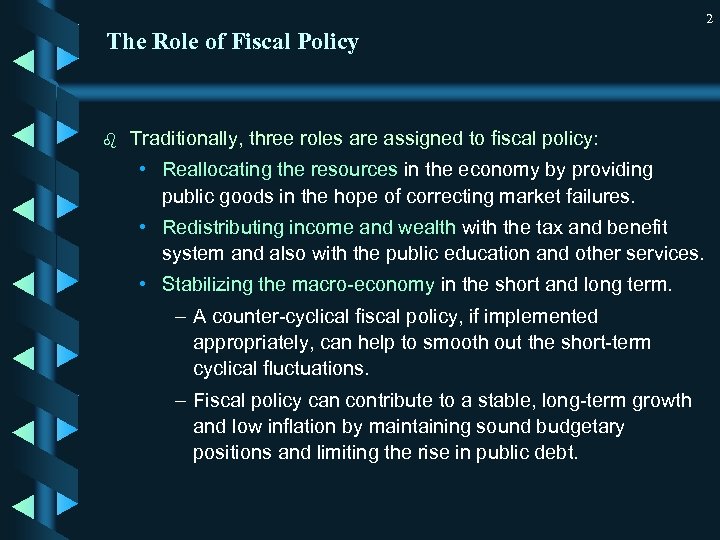 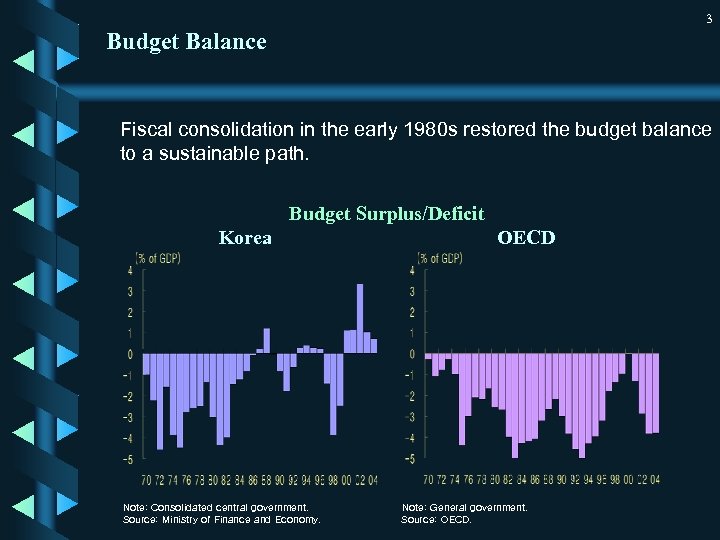 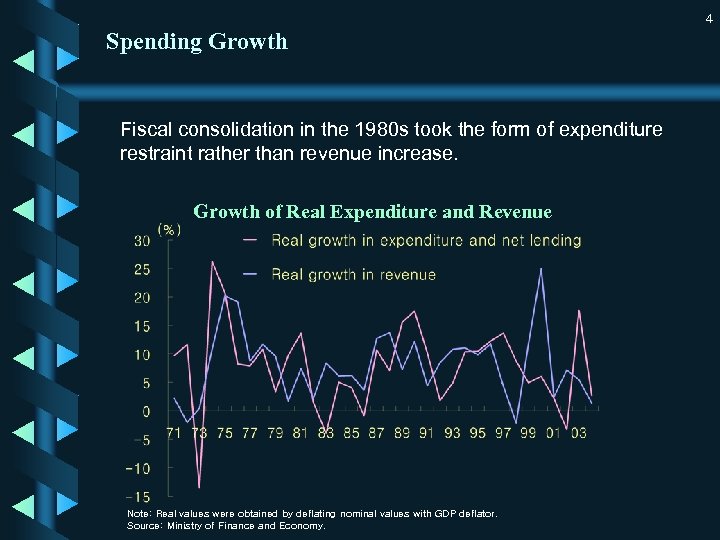 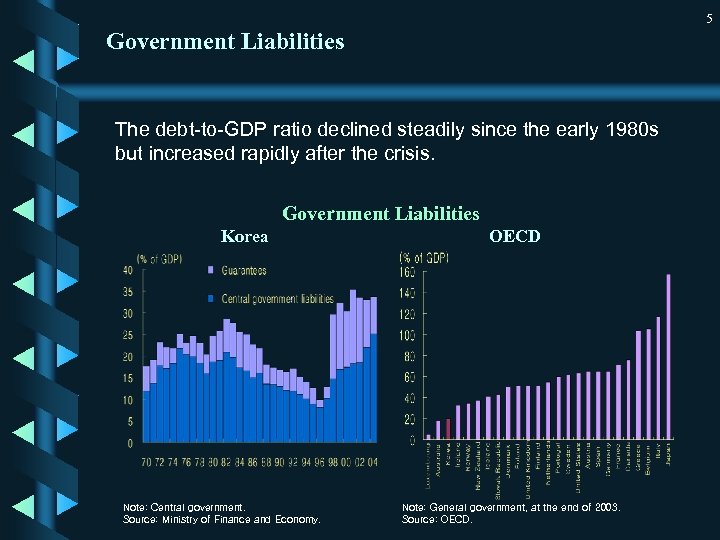 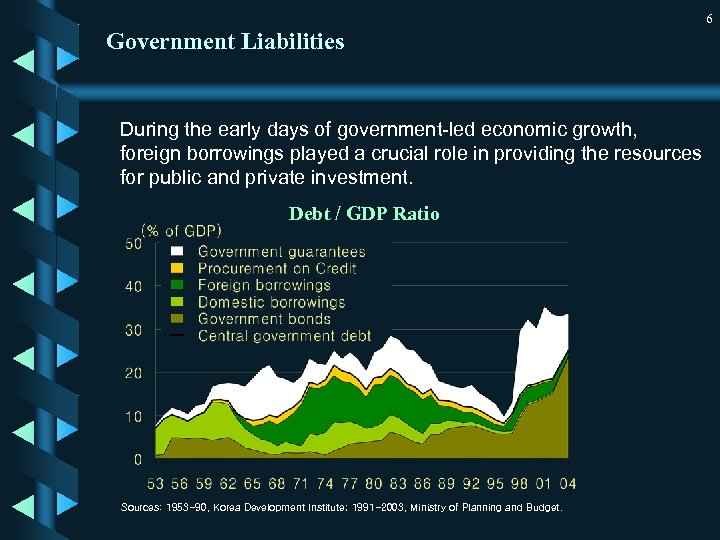 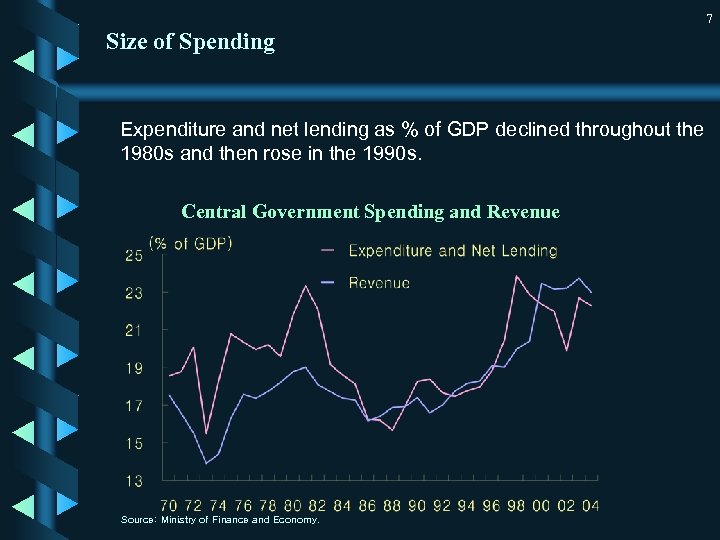 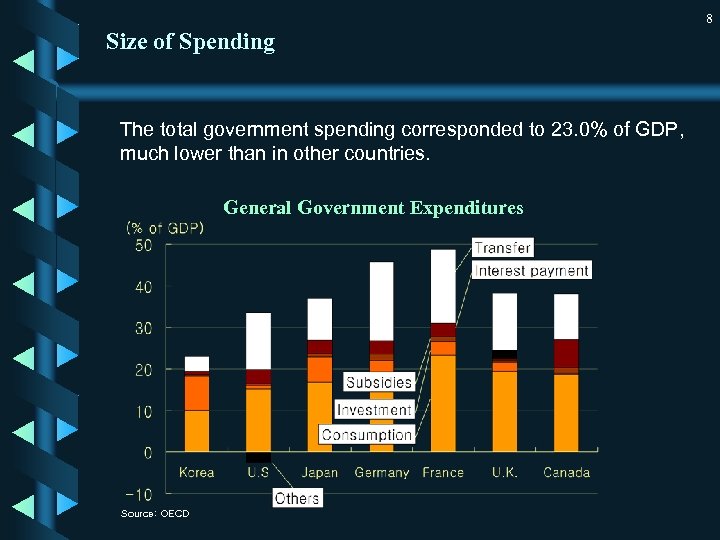 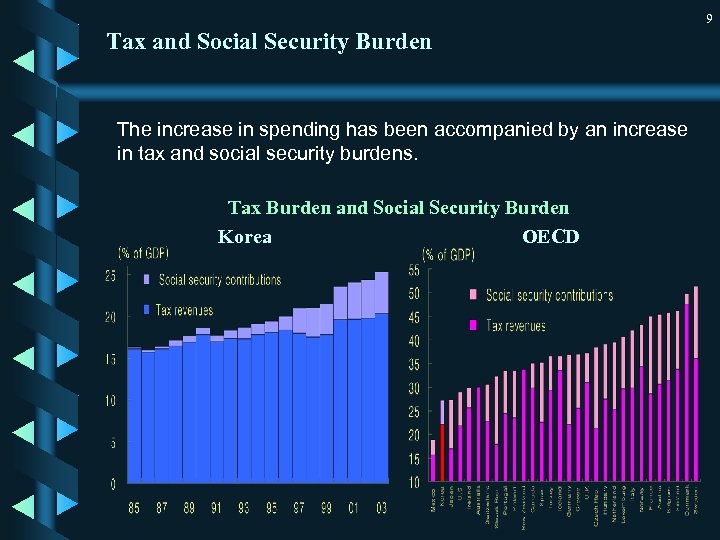 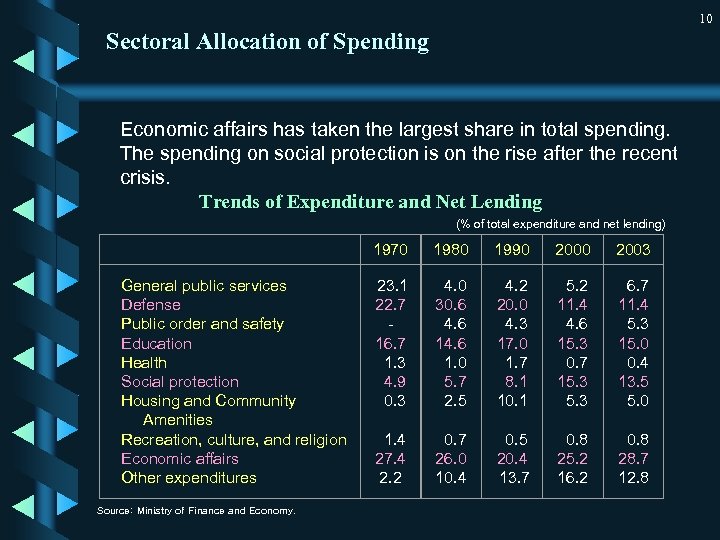 2 The Role of Fiscal Policy b Traditionally, three roles are assigned to fiscal policy: • Reallocating the resources in the economy by providing public goods in the hope of correcting market failures. • Redistributing income and wealth with the tax and benefit system and also with the public education and other services. • Stabilizing the macro-economy in the short and long term. – A counter-cyclical fiscal policy, if implemented appropriately, can help to smooth out the short-term cyclical fluctuations. – Fiscal policy can contribute to a stable, long-term growth and low inflation by maintaining sound budgetary positions and limiting the rise in public debt.

4 Spending Growth Fiscal consolidation in the 1980 s took the form of expenditure restraint rather than revenue increase. Growth of Real Expenditure and Revenue Note: Real values were obtained by deflating nominal values with GDP deflator. Source: Ministry of Finance and Economy.

7 Size of Spending Expenditure and net lending as % of GDP declined throughout the 1980 s and then rose in the 1990 s. Central Government Spending and Revenue Source: Ministry of Finance and Economy.

8 Size of Spending The total government spending corresponded to 23. 0% of GDP, much lower than in other countries. General Government Expenditures Source: OECD

13 Coping with the Crisis of 1997 During 1998 -2002, the government made loans to the Korea Deposit Insurance Corporation (KDIC) and the Korea Asset Management Corporation (KAMCO) in the amount of interest payment on the restructuring bonds issued by these corporations. The government also provided guarantees on these bonds. In 2002, the government announced a plan to take up the obligation on part of the bonds (49 trillion won) and transform them into treasury bonds. The rest would be repaid by the KDIC and KAMCO. In 2003, 13 trillion was spent on the transformation. The figure for 2004 -2006 is 12 trillion won each year. In addition, the government expanded the welfare programs significantly to help the poor and the unemployed.

14 Assessment b Overall, fiscal policy in Korea has carried out its roles rather successfully: • Resource allocation: The emphasis was placed on promoting the economic growth with large spending on education, infrastructure, and other public goods. • Income distribution: After the crisis, spending on social protection is increasing rapidly, and is expected to increase further in coming years. • Stabilization: The prudent management of fiscal policy contributed to a sound budgetary position and a low debt-to. GDP ratio. – But the short-term stabilization has been limited due to the small sizes of tax revenues and welfare spending.

15 Assessment The Korean economy recorded an average growth rate of around 8%. The inflation was reduced drastically in the early 1980 s and declined further after the crisis of 1997. Output Growth and Inflation Source: Bank of Korea.

16 Assessment Korea is also known as a country with a relatively equitable distribution of income, even though the inequality rose significantly after the crisis. Labor Market Indicators Sources: National Statistical Office; Hyun (2003) and Yoo (2004). Gini Coefficient

17 Challenges b Containing the spending growth b • Revenue growth is expected to fall in line with output growth. • Spending is on a rising trend due in large part to the increasing welfare spending, especially on pension and health. Redefining the role of government b • Reducing the direct support to businesses. • Expanding basic public services such as judicial services, promotion of competitive business practices, statistical services. Enhancing the efficiency of spending • Promoting the autonomy and accountability of line ministries. • Greater focus on outputs and outcomes.

19 Reforming the Budget Structure b Public funds • Previously, public funds were off-budget; they did not need to go through the approval process of the National Assembly. • Now the same approval process is applied to public funds as to the general and special accounts. • The revised Basic Law on Public Fund Management mandates MPB to examine the raison d’etre of individual funds every 3 years and to recommend their abolition or consolidation when needed. – The first such exercise was carried out last year. b Special accounts • The government is currently preparing a plan to restructure and streamline special accounts and public funds.

20 Major Players in the Budget Process b b Presidential system of government Ministry of Planning and Budget (MPB) – Prepares the budget and tables it on the National Assembly. b Ministry of Finance and Economy (MOFE) • Treasury Bureau – Releases cash to spending ministries. – Issues treasury bonds and manages assets and liabilities. • Tax and Customs Office – In charge of tax policy and revenue forecasts. b Board of Audit and Inspection (BAI) – The supreme audit institution in Korea, reporting to the president. b b National Assembly Line ministries

21 Highly Centralized Budget Process b Strategic dominance-based approach (von Hagen and Harden, 1996) Budget preparation and finalization Execution • The MPB has a clear upper hand vis-à-vis line ministries in budget negotiations. • The National Assembly is prohibited from increasing the total spending or introducing new spending items without consent from the government. • Strict cash limits are imposed on ministerial spending by the MOFE. • The BAI performs both financial auditing and Ex post control regularity check of ministerial activities.

24 Pros and Cons of MTEF • Better able to cope with the trend increase in spending, especially when annual spending ceilings are set up and observed over the medium term (a target-based approach). Pros • Stronger linkage between policy-making and budgeting. • Full operation of the automatic stabilizer. • Greater autonomy in line ministries. Cons • Spending projections becoming “entitlements” for line ministries. • Deficit bias when macro-forecasts are overly optimistic. • Greater room for waste, fraud, and abuse in line ministries.

25 Improving the MTEF – Performance management to be strengthened and the capacity for planning and prioritizing to be improved in line ministries. – The capacity for policy analysis and macro-forecasts to be enhanced in the MPB. – The medium-term targets in the MTEF to be clarified and the annual operational targets to be set out. – Various risk analysis to be introduced. – A mechanism for “baseline” projections to be established. – A reconciliation process to analyze the difference between projections on fiscal aggregates and outturns to be established. – Internal auditing to be strengthened. – “Program budgeting” to be introduced.

27 Performance Management System (MPB) • Adopting the framework in the Government Performance and Results Act (GPRA) of the U. S. federal government. • Requires line ministries to set up performance goals and indicators for major spending programs, and prepare annual performance plans and reports. • Has not been very successful. • Assesses the performance and organizational capacity of ministries and citizen satisfaction with them. Government Operations Assessment System (OGPC) • Relies mostly on the subjective assessment by outside experts and in-house staff. • Assessment results are reported to the President in biannual cabinet meetings. • From 2005 on, line ministries should establish performance indicators and announce target levels in annual business plans.

28 • Designed after PART (Program Assessment Rating Tool) of the U. S. federal government. Self. Assessment of Spending Programs (MPB) • Requires line ministries to assess their own programs with spending levels above a certain threshold over a cycle of 3 years. • The assessment is based on a series of questions asking the appropriateness of program design, program management, and performance assessment and feedback. • MPB reviews the assessment results and takes them into account in budgeting. Management by Objectives (MOGAHA) • Sets annual performance targets for civil servants and reflects the results on their pay and promotion.

30 Other Reform Efforts b b Works are underway to: • Redefine the scope of “general government. ” • Introduce accrual accounting in financial reports. – For now, budgeting in contrast to financial reporting will continue to be based on cash accounting in the foreseeable future. • Redesign the IT system to accommodate the changes mentioned above. Budget and Accounting Reinvention Office (BARO) was formed to tackle these issues in addition to the introduction of program budgeting. • BARO members consist of secondees from MPB, MOFE, BAI, etc.

31 To Summarize. . b b Many efforts to modernize the fiscal management system after the crisis of 1997. • The government began the reform process on their own initiatives. Major points • Streamlining the budget structure • Introducing the MTEF • Strengthening performance management • Redefining the scope of government • Introducing accrual accounting Aggregate fiscal discipline Allocative and technical efficiency Transparency