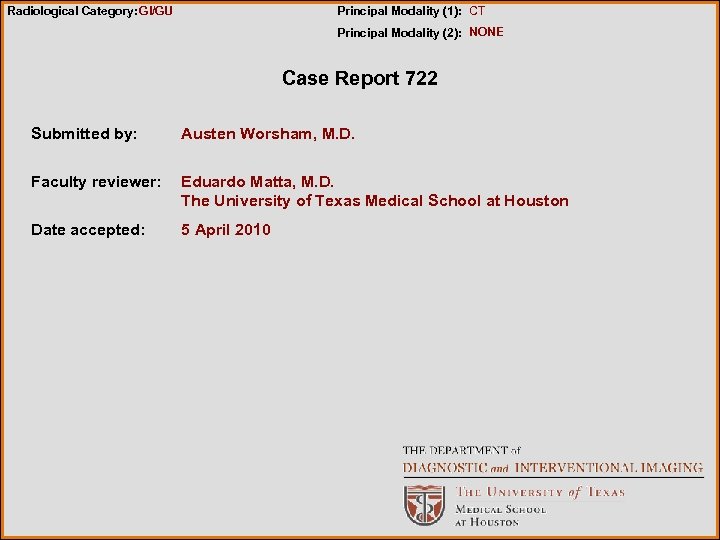 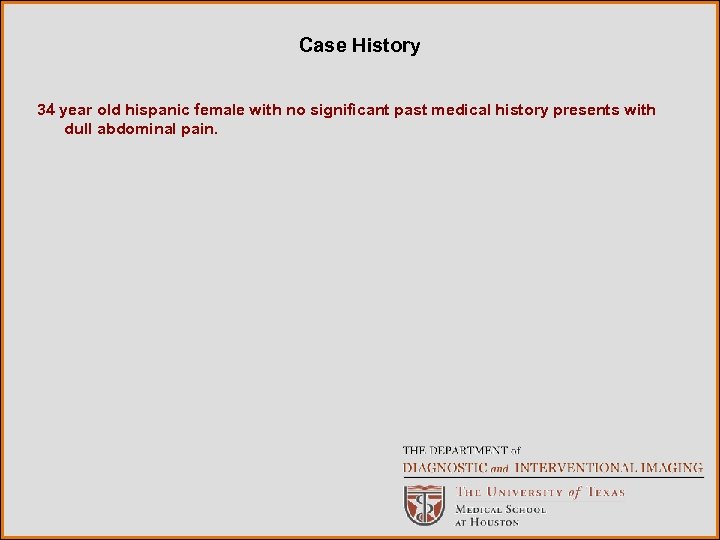 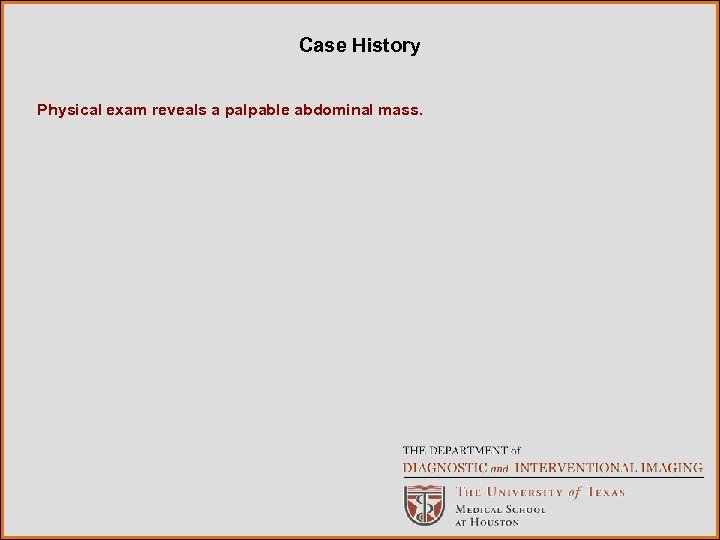 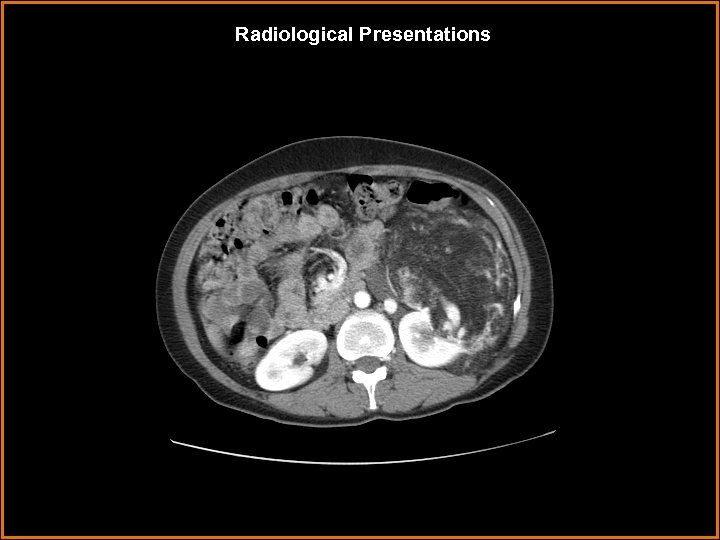 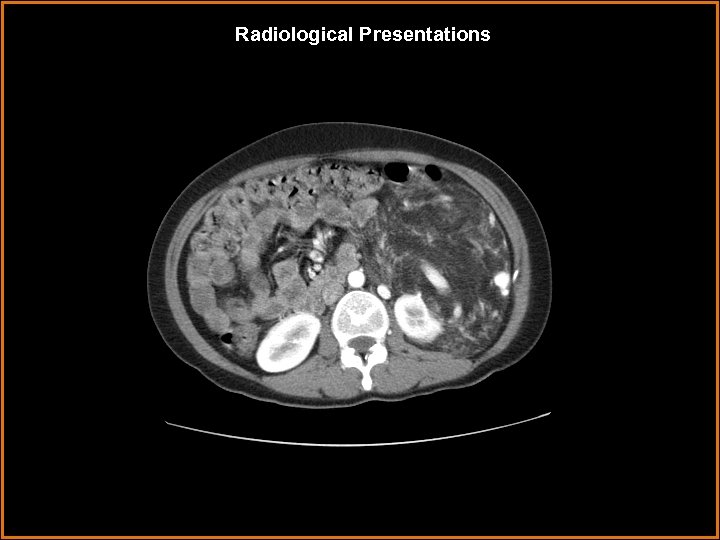 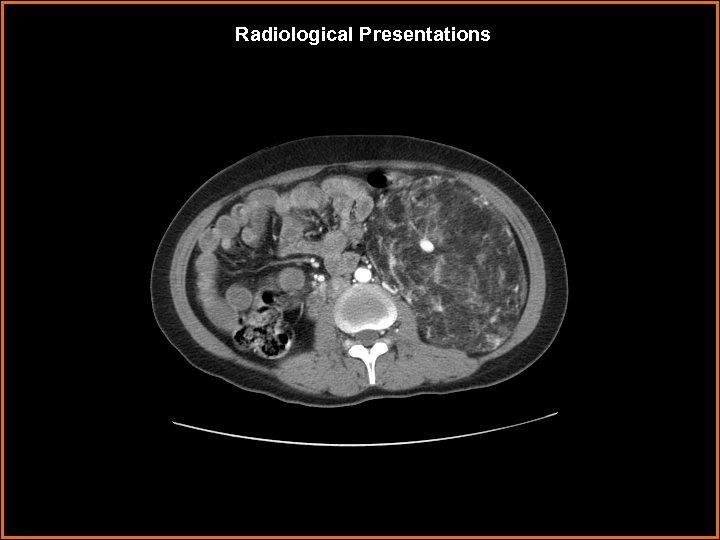 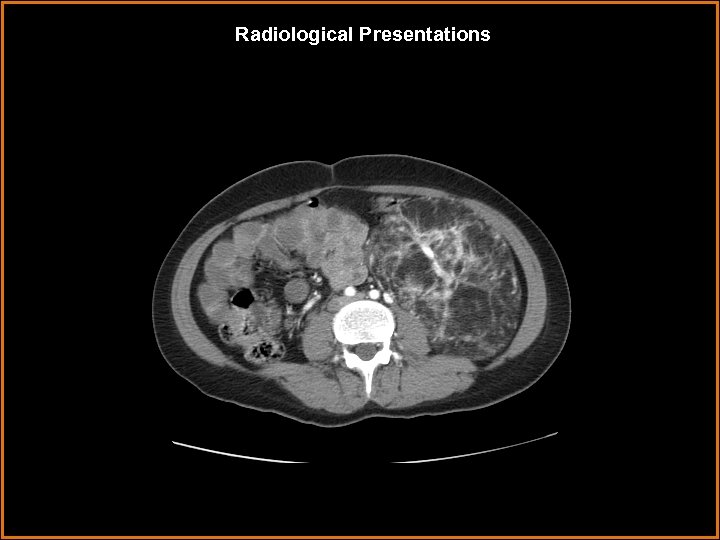 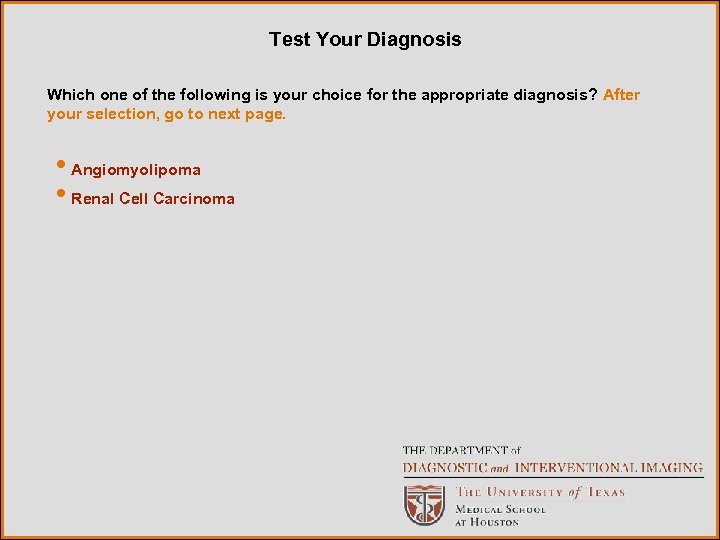 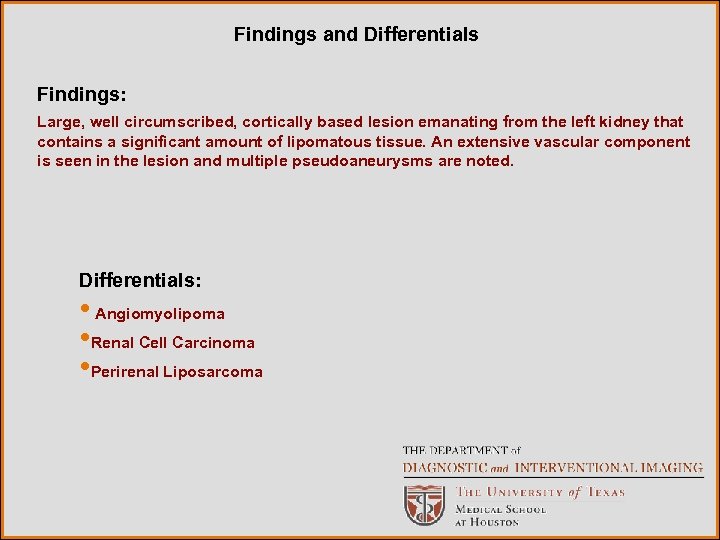 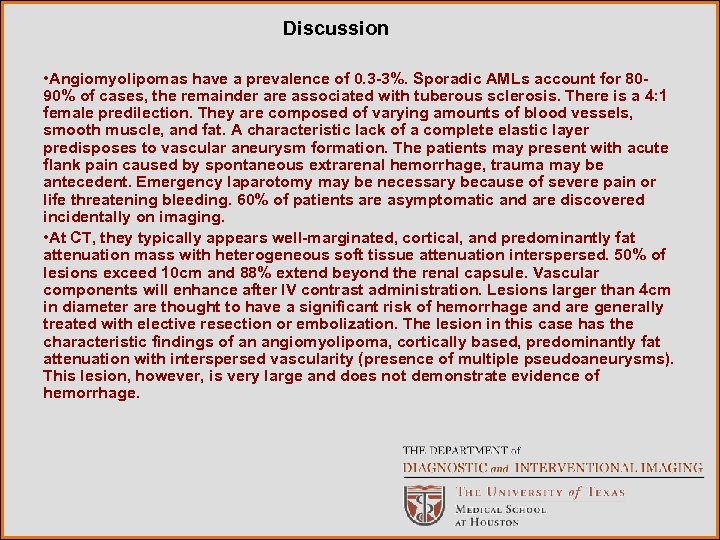 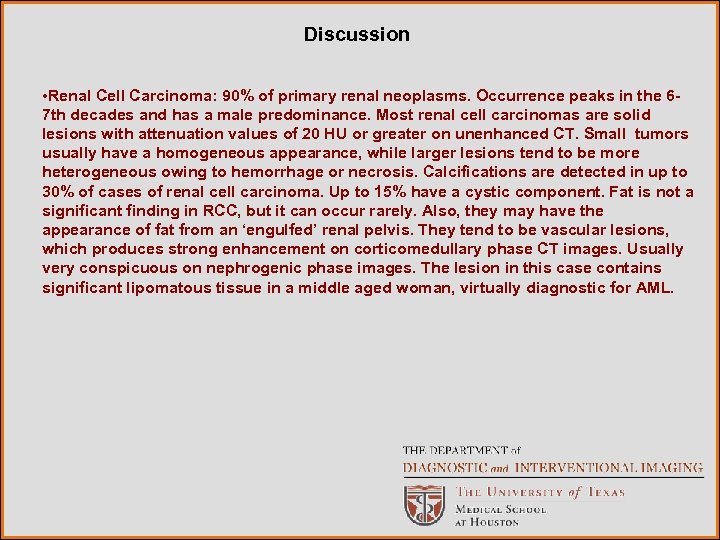 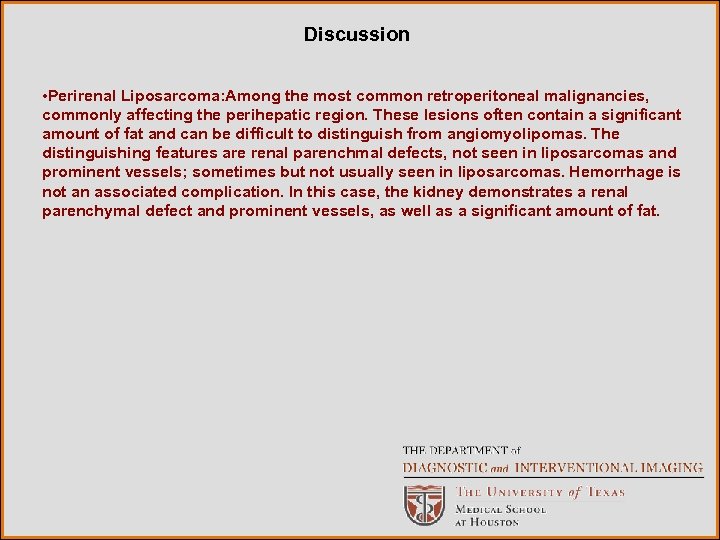 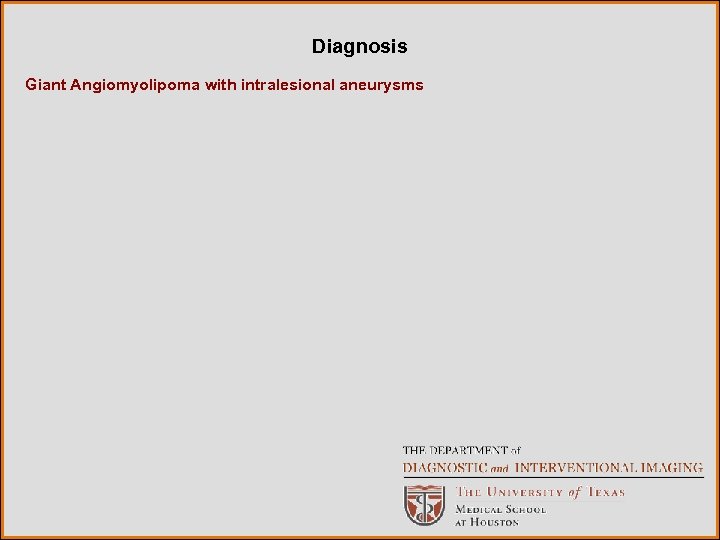 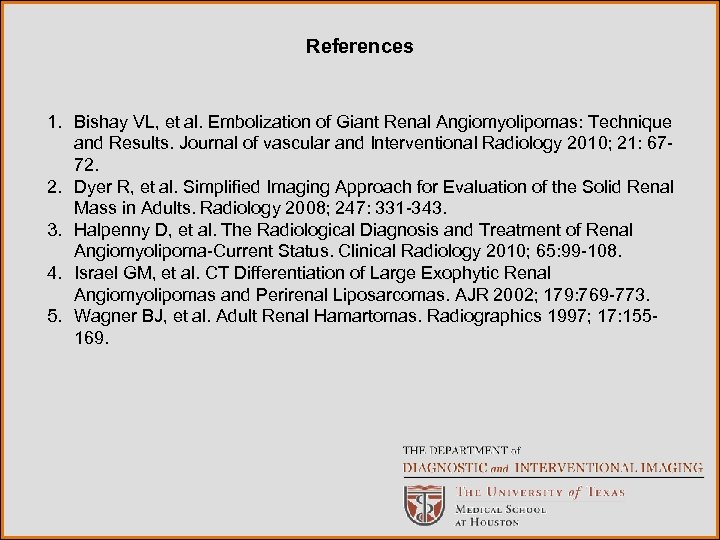 Test Your Diagnosis Which one of the following is your choice for the appropriate diagnosis? After your selection, go to next page. • Angiomyolipoma • Renal Cell Carcinoma

Discussion • Angiomyolipomas have a prevalence of 0. 3 -3%. Sporadic AMLs account for 8090% of cases, the remainder are associated with tuberous sclerosis. There is a 4: 1 female predilection. They are composed of varying amounts of blood vessels, smooth muscle, and fat. A characteristic lack of a complete elastic layer predisposes to vascular aneurysm formation. The patients may present with acute flank pain caused by spontaneous extrarenal hemorrhage, trauma may be antecedent. Emergency laparotomy may be necessary because of severe pain or life threatening bleeding. 60% of patients are asymptomatic and are discovered incidentally on imaging. • At CT, they typically appears well-marginated, cortical, and predominantly fat attenuation mass with heterogeneous soft tissue attenuation interspersed. 50% of lesions exceed 10 cm and 88% extend beyond the renal capsule. Vascular components will enhance after IV contrast administration. Lesions larger than 4 cm in diameter are thought to have a significant risk of hemorrhage and are generally treated with elective resection or embolization. The lesion in this case has the characteristic findings of an angiomyolipoma, cortically based, predominantly fat attenuation with interspersed vascularity (presence of multiple pseudoaneurysms). This lesion, however, is very large and does not demonstrate evidence of hemorrhage.

Discussion • Renal Cell Carcinoma: 90% of primary renal neoplasms. Occurrence peaks in the 67 th decades and has a male predominance. Most renal cell carcinomas are solid lesions with attenuation values of 20 HU or greater on unenhanced CT. Small tumors usually have a homogeneous appearance, while larger lesions tend to be more heterogeneous owing to hemorrhage or necrosis. Calcifications are detected in up to 30% of cases of renal cell carcinoma. Up to 15% have a cystic component. Fat is not a significant finding in RCC, but it can occur rarely. Also, they may have the appearance of fat from an ‘engulfed’ renal pelvis. They tend to be vascular lesions, which produces strong enhancement on corticomedullary phase CT images. Usually very conspicuous on nephrogenic phase images. The lesion in this case contains significant lipomatous tissue in a middle aged woman, virtually diagnostic for AML.

Discussion • Perirenal Liposarcoma: Among the most common retroperitoneal malignancies, commonly affecting the perihepatic region. These lesions often contain a significant amount of fat and can be difficult to distinguish from angiomyolipomas. The distinguishing features are renal parenchmal defects, not seen in liposarcomas and prominent vessels; sometimes but not usually seen in liposarcomas. Hemorrhage is not an associated complication. In this case, the kidney demonstrates a renal parenchymal defect and prominent vessels, as well as a significant amount of fat.