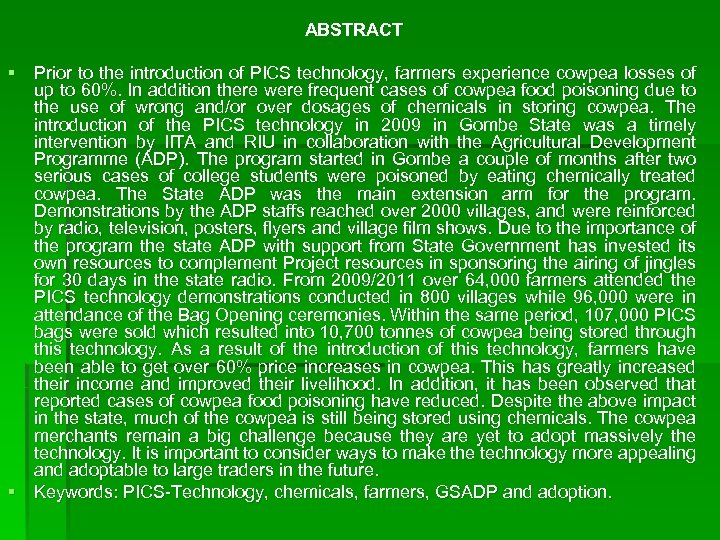 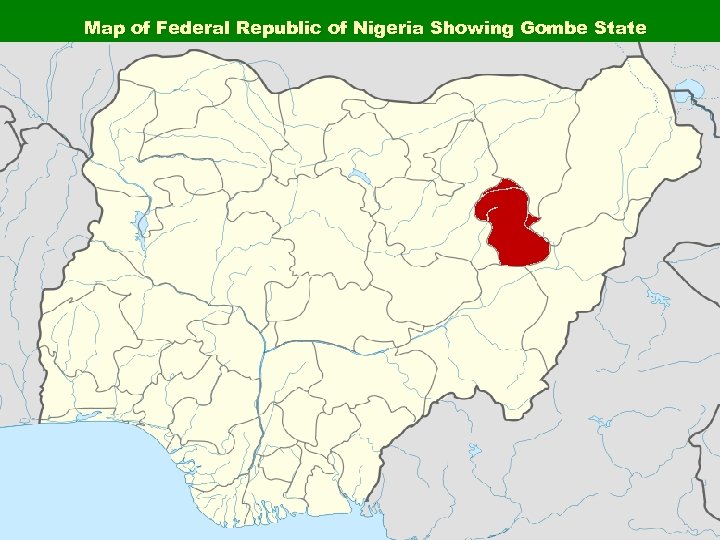 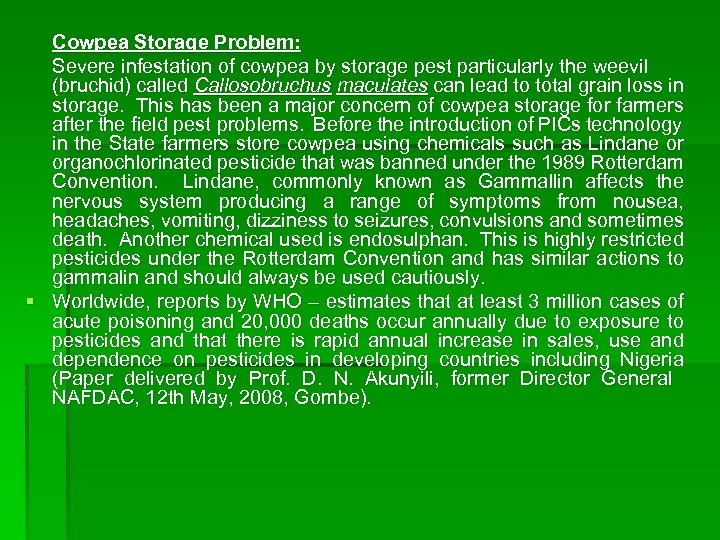 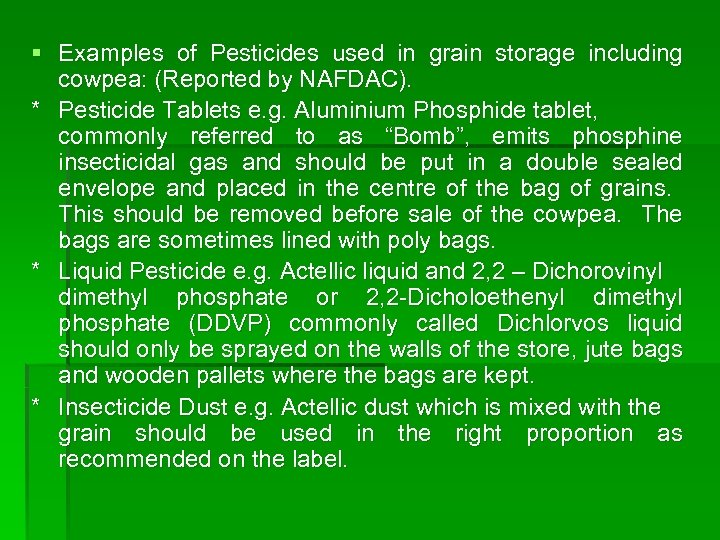 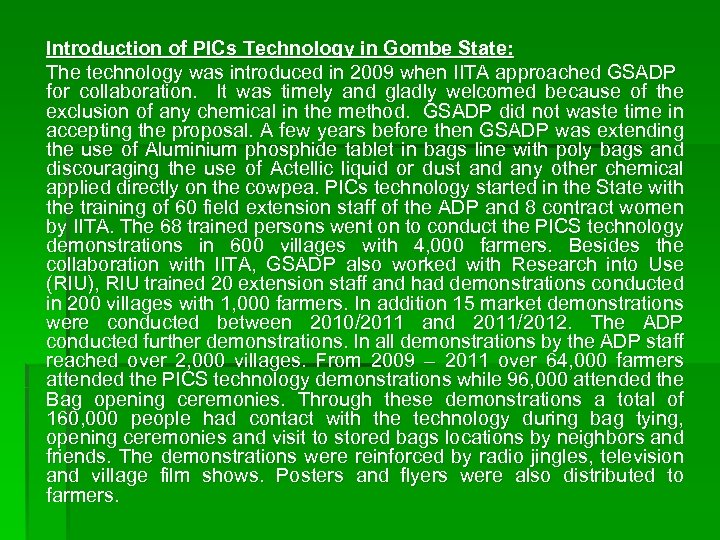 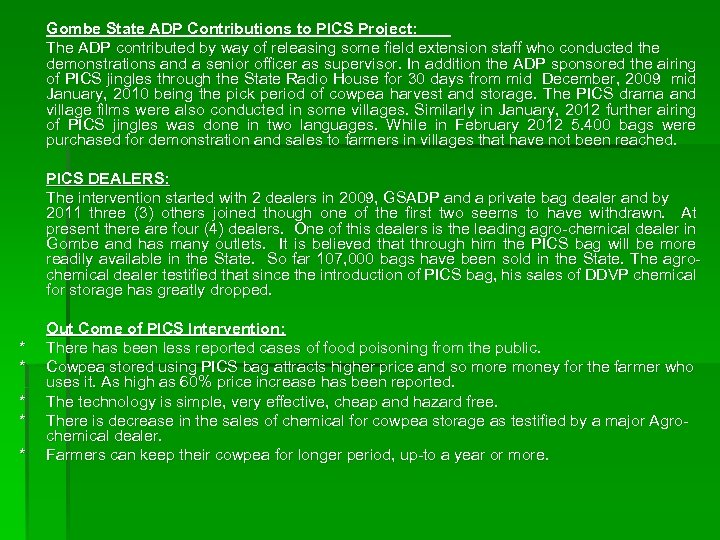 ABSTRACT § Prior to the introduction of PICS technology, farmers experience cowpea losses of up to 60%. In addition there were frequent cases of cowpea food poisoning due to the use of wrong and/or over dosages of chemicals in storing cowpea. The introduction of the PICS technology in 2009 in Gombe State was a timely intervention by IITA and RIU in collaboration with the Agricultural Development Programme (ADP). The program started in Gombe a couple of months after two serious cases of college students were poisoned by eating chemically treated cowpea. The State ADP was the main extension arm for the program. Demonstrations by the ADP staffs reached over 2000 villages, and were reinforced by radio, television, posters, flyers and village film shows. Due to the importance of the program the state ADP with support from State Government has invested its own resources to complement Project resources in sponsoring the airing of jingles for 30 days in the state radio. From 2009/2011 over 64, 000 farmers attended the PICS technology demonstrations conducted in 800 villages while 96, 000 were in attendance of the Bag Opening ceremonies. Within the same period, 107, 000 PICS bags were sold which resulted into 10, 700 tonnes of cowpea being stored through this technology. As a result of the introduction of this technology, farmers have been able to get over 60% price increases in cowpea. This has greatly increased their income and improved their livelihood. In addition, it has been observed that reported cases of cowpea food poisoning have reduced. Despite the above impact in the state, much of the cowpea is still being stored using chemicals. The cowpea merchants remain a big challenge because they are yet to adopt massively the technology. It is important to consider ways to make the technology more appealing and adoptable to large traders in the future. § Keywords: PICS-Technology, chemicals, farmers, GSADP and adoption.

Introduction: Gombe State is in the north eastern region of Nigeria. The state has a land area of 20, 265 km 2 and a projected population of 2, 755, 387. Located between latitude 9030’ and 12030’N and longitude 8045’ and 11045’E. Average rainfall is 850 mm with the southern part being wetter and the north drier. The vegetation ranges from Northern Guinea Savannah in the south to Sudan Savannah in the north. Agriculture engages over 80% of the State population. The major crops are maize, sorghum, millet, rice groundnut, cowpea, cotton, tomato, onion pepper. Others are sesame, soyabeans, sweet potato, water melon, etc. Cowpea is one of the staple food and cash crop in Gombe State which is in the Sub-Saharan Africa and the dry Savannah Regions of West Africa. The seeds are a major source of plant proteins for man and source of cash income while the plant residue (fodder) serve as feed for animals during the dry season when feeds are scarce. The tender leaves are eaten as spinach and immature pods and fresh seeds are eaten as vegetables. The dry seeds may be grand into meal or flour which is used in a number of ways. The state is the leading north-eastern region cowpea market in Nigeria. Report from the grain merchants at the grain market has it that at the peak period of cowpea sales an average of 935. 5 tons of cowpea leave Gombe daily to Lagos, Port Harcourt, Enugu and other parts of Southern Nigeria and another 240 metric-tons to Kano in the North and neighboring Country, Niger. (Source: Grain Merchants).

Cowpea Storage Problem: Severe infestation of cowpea by storage pest particularly the weevil (bruchid) called Callosobruchus maculates can lead to total grain loss in storage. This has been a major concern of cowpea storage for farmers after the field pest problems. Before the introduction of PICs technology in the State farmers store cowpea using chemicals such as Lindane or organochlorinated pesticide that was banned under the 1989 Rotterdam Convention. Lindane, commonly known as Gammallin affects the nervous system producing a range of symptoms from nousea, headaches, vomiting, dizziness to seizures, convulsions and sometimes death. Another chemical used is endosulphan. This is highly restricted pesticides under the Rotterdam Convention and has similar actions to gammalin and should always be used cautiously. § Worldwide, reports by WHO – estimates that at least 3 million cases of acute poisoning and 20, 000 deaths occur annually due to exposure to pesticides and that there is rapid annual increase in sales, use and dependence on pesticides in developing countries including Nigeria (Paper delivered by Prof. D. N. Akunyili, former Director General NAFDAC, 12 th May, 2008, Gombe).

§ In February, 2008, the Nigerian House Committee on Health alerted NAFDAC of a health hazard incidence in the North East Region which was alleged to be due to the preservation of cowpea with chemical. In another State in the Southern Region over 112 people were hospitalized and 2 children died. NAFDAC investigated the incidences and the laboratory revealed outrageously high levels of organophosphates, carbamates, fenithrothian and chloropyrifos which are highly toxic pesticides. They must have used either higher doses than recommended or applied wrongly. § In April 2008, 120 students were rushed to hospital in Gombe after consuming a meal of cowpea which NAFDAC after laboratory test of the cooked consumed and uncooked found the cowpea contained outrageously high levels of Lindane and endosuphan

§ Examples of Pesticides used in grain storage including cowpea: (Reported by NAFDAC). * Pesticide Tablets e. g. Aluminium Phosphide tablet, commonly referred to as “Bomb”, emits phosphine insecticidal gas and should be put in a double sealed envelope and placed in the centre of the bag of grains. This should be removed before sale of the cowpea. The bags are sometimes lined with poly bags. * Liquid Pesticide e. g. Actellic liquid and 2, 2 – Dichorovinyl dimethyl phosphate or 2, 2 -Dicholoethenyl dimethyl phosphate (DDVP) commonly called Dichlorvos liquid should only be sprayed on the walls of the store, jute bags and wooden pallets where the bags are kept. * Insecticide Dust e. g. Actellic dust which is mixed with the grain should be used in the right proportion as recommended on the label.

Introduction of PICs Technology in Gombe State: The technology was introduced in 2009 when IITA approached GSADP for collaboration. It was timely and gladly welcomed because of the exclusion of any chemical in the method. GSADP did not waste time in accepting the proposal. A few years before then GSADP was extending the use of Aluminium phosphide tablet in bags line with poly bags and discouraging the use of Actellic liquid or dust and any other chemical applied directly on the cowpea. PICs technology started in the State with the training of 60 field extension staff of the ADP and 8 contract women by IITA. The 68 trained persons went on to conduct the PICS technology demonstrations in 600 villages with 4, 000 farmers. Besides the collaboration with IITA, GSADP also worked with Research into Use (RIU), RIU trained 20 extension staff and had demonstrations conducted in 200 villages with 1, 000 farmers. In addition 15 market demonstrations were conducted between 2010/2011 and 2011/2012. The ADP conducted further demonstrations. In all demonstrations by the ADP staff reached over 2, 000 villages. From 2009 – 2011 over 64, 000 farmers attended the PICS technology demonstrations while 96, 000 attended the Bag opening ceremonies. Through these demonstrations a total of 160, 000 people had contact with the technology during bag tying, opening ceremonies and visit to stored bags locations by neighbors and friends. The demonstrations were reinforced by radio jingles, television and village film shows. Posters and flyers were also distributed to farmers.

Gombe State ADP Contributions to PICS Project: The ADP contributed by way of releasing some field extension staff who conducted the demonstrations and a senior officer as supervisor. In addition the ADP sponsored the airing of PICS jingles through the State Radio House for 30 days from mid December, 2009 mid January, 2010 being the pick period of cowpea harvest and storage. The PICS drama and village films were also conducted in some villages. Similarly in January, 2012 further airing of PICS jingles was done in two languages. While in February 2012 5. 400 bags were purchased for demonstration and sales to farmers in villages that have not been reached. PICS DEALERS: The intervention started with 2 dealers in 2009, GSADP and a private bag dealer and by 2011 three (3) others joined though one of the first two seems to have withdrawn. At present there are four (4) dealers. One of this dealers is the leading agro-chemical dealer in Gombe and has many outlets. It is believed that through him the PICS bag will be more readily available in the State. So far 107, 000 bags have been sold in the State. The agrochemical dealer testified that since the introduction of PICS bag, his sales of DDVP chemical for storage has greatly dropped. * * * Out Come of PICS Intervention: There has been less reported cases of food poisoning from the public. Cowpea stored using PICS bag attracts higher price and so more money for the farmer who uses it. As high as 60% price increase has been reported. The technology is simple, very effective, cheap and hazard free. There is decrease in the sales of chemical for cowpea storage as testified by a major Agrochemical dealer. Farmers can keep their cowpea for longer period, up-to a year or more.

Constraints/Challenges: § Most merchants in the grain market who buy cowpea from the farmers have not adopted the PICS bag. They still treat the cowpea with chemicals after buying from the farmers since they store it for a while before selling. They claim it is cheaper to use chemicals than the PICS bags, considering the quantities they store and transport. Moreover since the treated cowpea are for sales outside the State to them it poses no danger. With this attitude, even if the farmers fully adopt the PICs technology, there may still be the problem of cowpea treated with chemicals leaving the state to other states and country. This is because the merchants buy cowpea stored in PICS bags from the farmers and treat with chemicals for storage before selling. § In some areas of the State the farmers complained that the PICS bag is expensive and have continued with the use of Aluminium phosphide tablet in bags lined with poly bags which they find cheaper in the short run. § There are still many more villages that are yet to have the PICS demonstration conducted. Appreciation: GSADP and the people of Gombe State would want to express their appreciation to Purdue University, IITA, RIU, Lela and all who have made this intervention possible. We believe many lives have been saved since the intervention was introduced in the State. THANK YOU FOR LISTENING