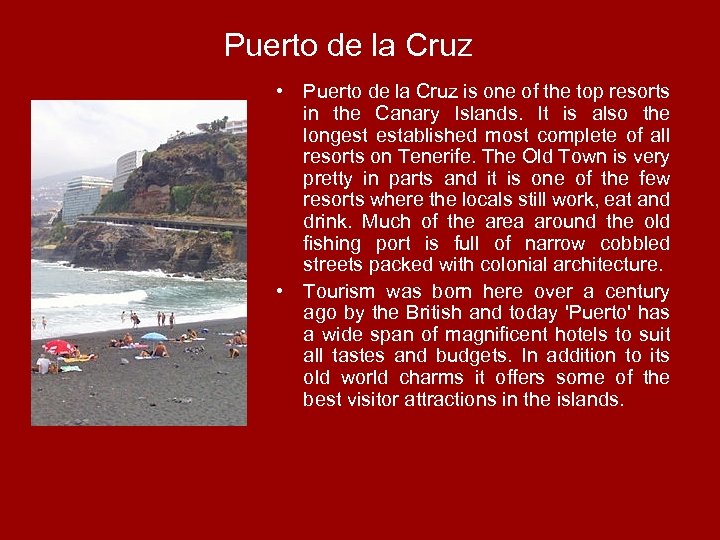 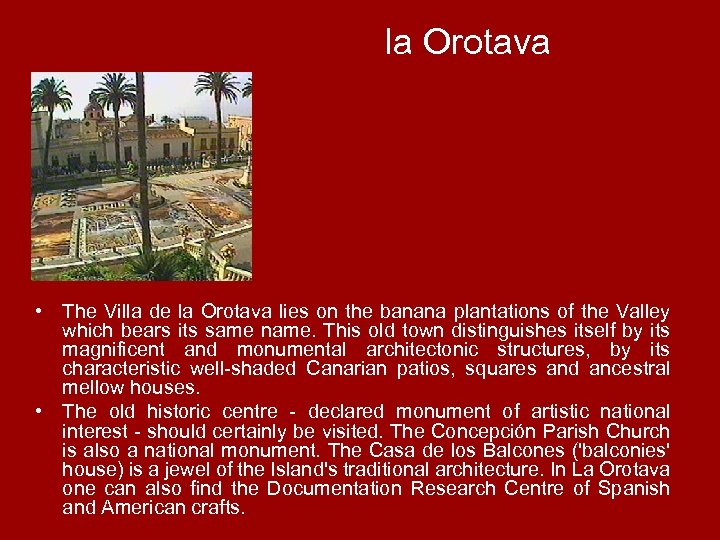 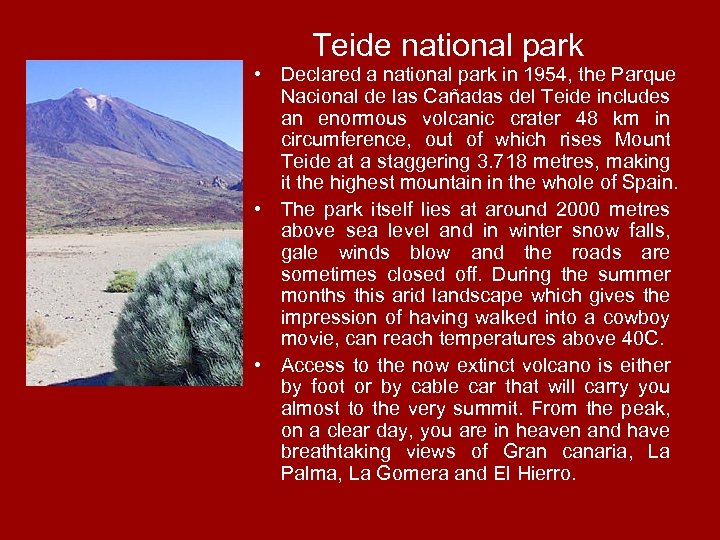 Puerto de la Cruz • Puerto de la Cruz is one of the top resorts in the Canary Islands. It is also the longest established most complete of all resorts on Tenerife. The Old Town is very pretty in parts and it is one of the few resorts where the locals still work, eat and drink. Much of the area around the old fishing port is full of narrow cobbled streets packed with colonial architecture. • Tourism was born here over a century ago by the British and today 'Puerto' has a wide span of magnificent hotels to suit all tastes and budgets. In addition to its old world charms it offers some of the best visitor attractions in the islands.

la Orotava • The Villa de la Orotava lies on the banana plantations of the Valley which bears its same name. This old town distinguishes itself by its magnificent and monumental architectonic structures, by its characteristic well-shaded Canarian patios, squares and ancestral mellow houses. • The old historic centre - declared monument of artistic national interest - should certainly be visited. The Concepción Parish Church is also a national monument. The Casa de los Balcones ('balconies' house) is a jewel of the Island's traditional architecture. In La Orotava one can also find the Documentation Research Centre of Spanish and American crafts.

Teide national park • Declared a national park in 1954, the Parque Nacional de las Cañadas del Teide includes an enormous volcanic crater 48 km in circumference, out of which rises Mount Teide at a staggering 3. 718 metres, making it the highest mountain in the whole of Spain. • The park itself lies at around 2000 metres above sea level and in winter snow falls, gale winds blow and the roads are sometimes closed off. During the summer months this arid landscape which gives the impression of having walked into a cowboy movie, can reach temperatures above 40 C. • Access to the now extinct volcano is either by foot or by cable car that will carry you almost to the very summit. From the peak, on a clear day, you are in heaven and have breathtaking views of Gran canaria, La Palma, La Gomera and El Hierro.

People and their origins The mythology of America

WELLCOME TO THE MANGO EXPERIENCE NAHMAN