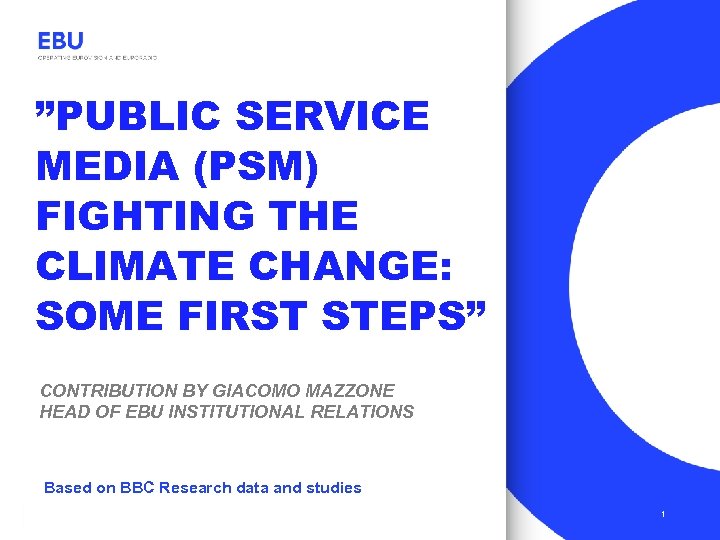 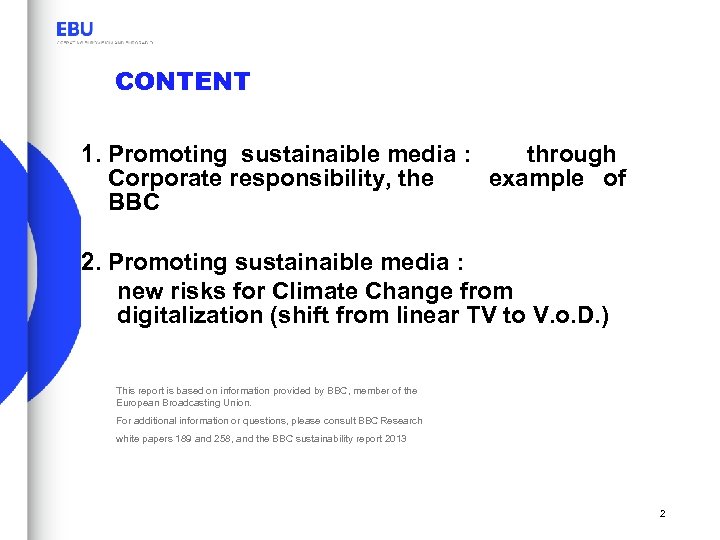 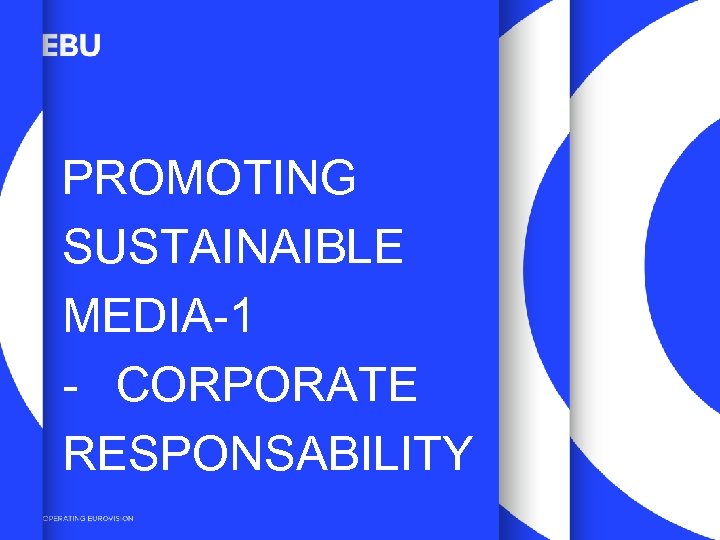 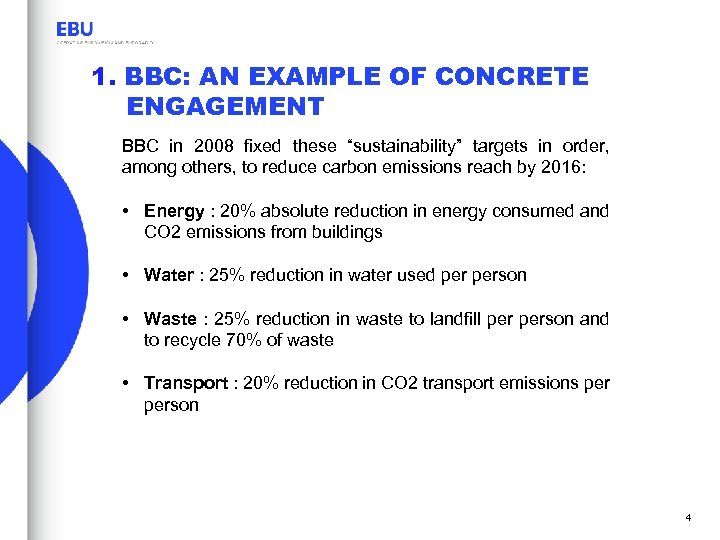 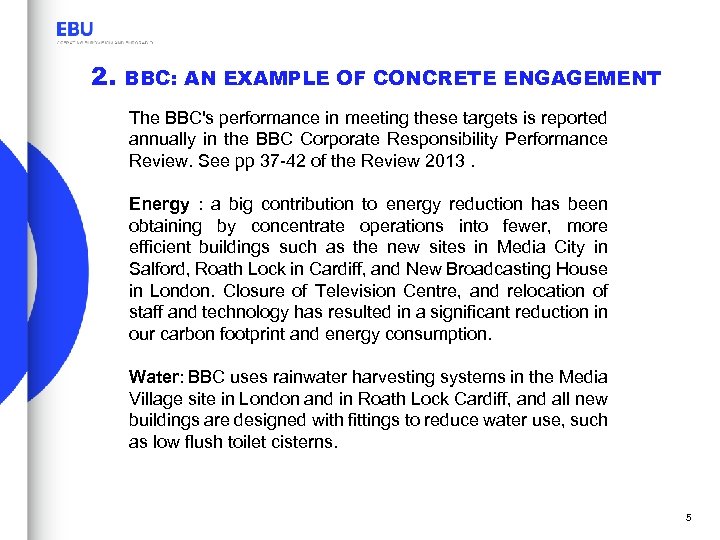 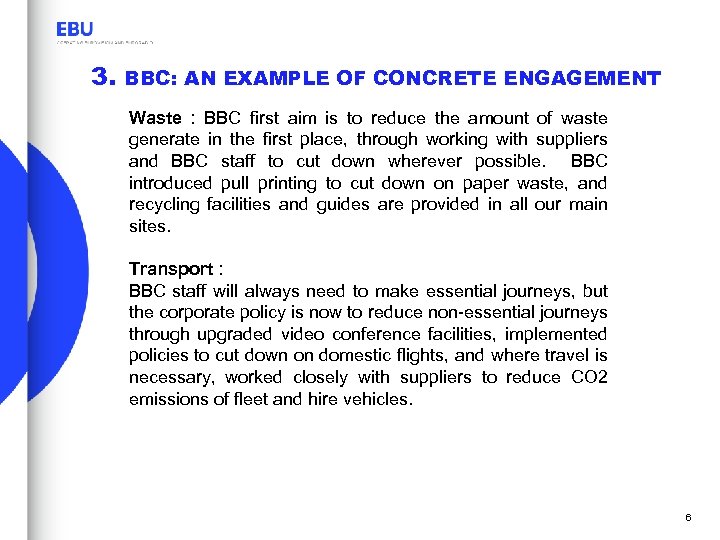 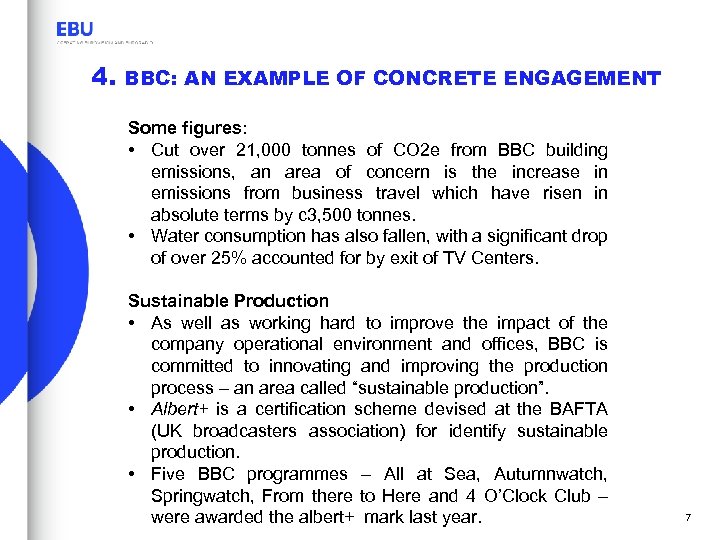 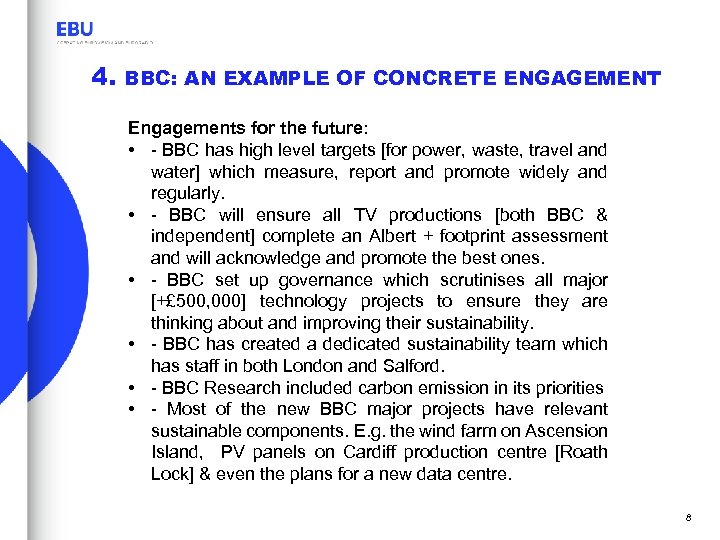 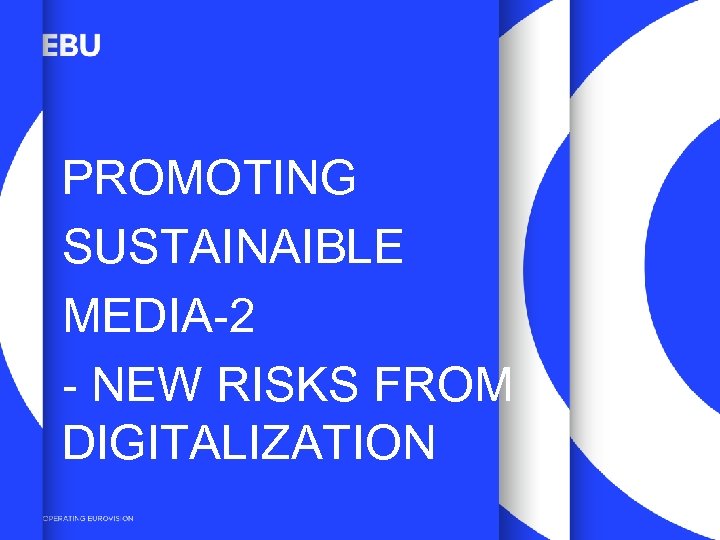 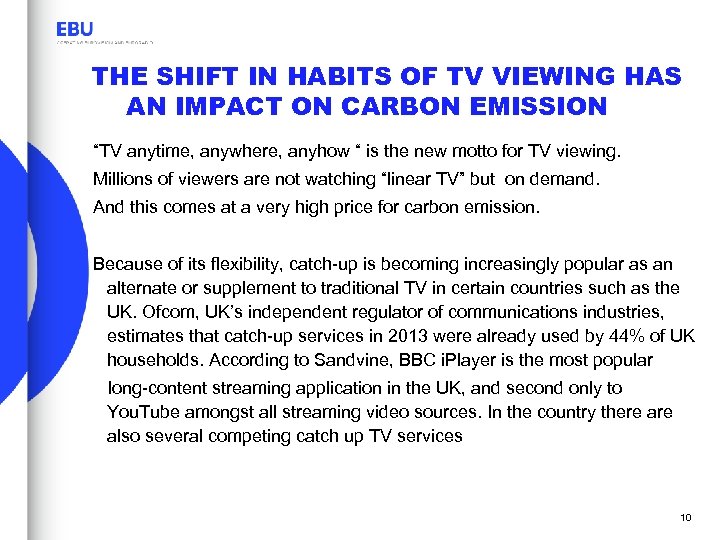 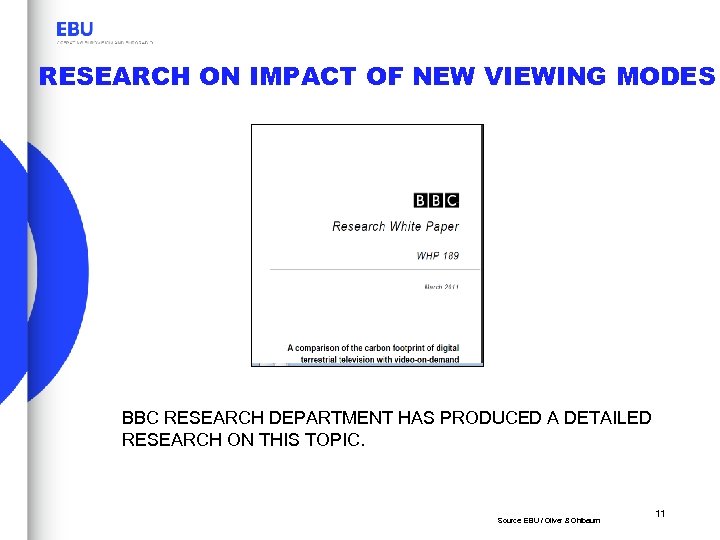 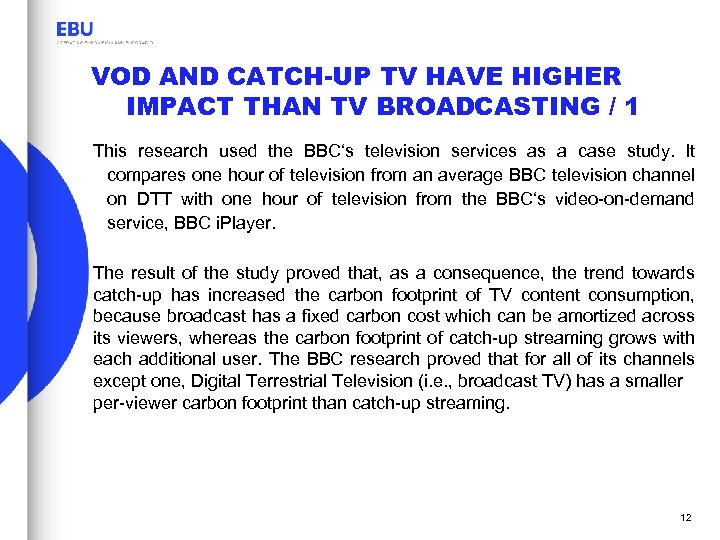 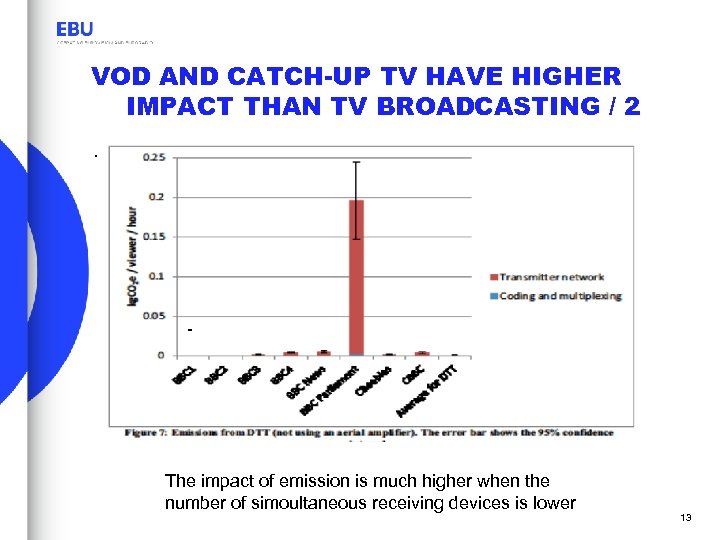 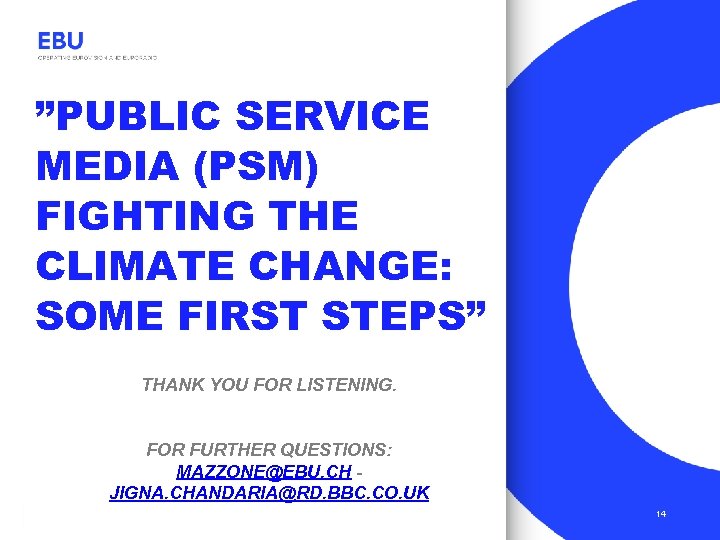 CONTENT 1. Promoting sustainaible media : through Corporate responsibility, the example of BBC 2. Promoting sustainaible media : new risks for Climate Change from digitalization (shift from linear TV to V. o. D. ) This report is based on information provided by BBC, member of the European Broadcasting Union. For additional information or questions, please consult BBC Research white papers 189 and 258, and the BBC sustainability report 2013 2

2. BBC: AN EXAMPLE OF CONCRETE ENGAGEMENT The BBC's performance in meeting these targets is reported annually in the BBC Corporate Responsibility Performance Review. See pp 37 -42 of the Review 2013. Energy : a big contribution to energy reduction has been obtaining by concentrate operations into fewer, more efficient buildings such as the new sites in Media City in Salford, Roath Lock in Cardiff, and New Broadcasting House in London. Closure of Television Centre, and relocation of staff and technology has resulted in a significant reduction in our carbon footprint and energy consumption. Water: BBC uses rainwater harvesting systems in the Media Village site in London and in Roath Lock Cardiff, and all new buildings are designed with fittings to reduce water use, such as low flush toilet cisterns. 5

3. BBC: AN EXAMPLE OF CONCRETE ENGAGEMENT Waste : BBC first aim is to reduce the amount of waste generate in the first place, through working with suppliers and BBC staff to cut down wherever possible. BBC introduced pull printing to cut down on paper waste, and recycling facilities and guides are provided in all our main sites. Transport : BBC staff will always need to make essential journeys, but the corporate policy is now to reduce non-essential journeys through upgraded video conference facilities, implemented policies to cut down on domestic flights, and where travel is necessary, worked closely with suppliers to reduce CO 2 emissions of fleet and hire vehicles. 6

4. BBC: AN EXAMPLE OF CONCRETE ENGAGEMENT Some figures: • Cut over 21, 000 tonnes of CO 2 e from BBC building emissions, an area of concern is the increase in emissions from business travel which have risen in absolute terms by c 3, 500 tonnes. • Water consumption has also fallen, with a significant drop of over 25% accounted for by exit of TV Centers. Sustainable Production • As well as working hard to improve the impact of the company operational environment and offices, BBC is committed to innovating and improving the production process – an area called “sustainable production”. • Albert+ is a certification scheme devised at the BAFTA (UK broadcasters association) for identify sustainable production. • Five BBC programmes – All at Sea, Autumnwatch, Springwatch, From there to Here and 4 O’Clock Club – were awarded the albert+ mark last year. 7

4. BBC: AN EXAMPLE OF CONCRETE ENGAGEMENT Engagements for the future: • - BBC has high level targets [for power, waste, travel and water] which measure, report and promote widely and regularly. • - BBC will ensure all TV productions [both BBC & independent] complete an Albert + footprint assessment and will acknowledge and promote the best ones. • - BBC set up governance which scrutinises all major [+£ 500, 000] technology projects to ensure they are thinking about and improving their sustainability. • - BBC has created a dedicated sustainability team which has staff in both London and Salford. • - BBC Research included carbon emission in its priorities • - Most of the new BBC major projects have relevant sustainable components. E. g. the wind farm on Ascension Island, PV panels on Cardiff production centre [Roath Lock] & even the plans for a new data centre. 8

THE SHIFT IN HABITS OF TV VIEWING HAS AN IMPACT ON CARBON EMISSION “TV anytime, anywhere, anyhow “ is the new motto for TV viewing. Millions of viewers are not watching “linear TV” but on demand. And this comes at a very high price for carbon emission. Because of its flexibility, catch-up is becoming increasingly popular as an alternate or supplement to traditional TV in certain countries such as the UK. Ofcom, UK’s independent regulator of communications industries, estimates that catch-up services in 2013 were already used by 44% of UK households. According to Sandvine, BBC i. Player is the most popular long-content streaming application in the UK, and second only to You. Tube amongst all streaming video sources. In the country there also several competing catch up TV services 10

VOD AND CATCH-UP TV HAVE HIGHER IMPACT THAN TV BROADCASTING / 1 This research used the BBC‘s television services as a case study. It compares one hour of television from an average BBC television channel on DTT with one hour of television from the BBC‘s video-on-demand service, BBC i. Player. The result of the study proved that, as a consequence, the trend towards catch-up has increased the carbon footprint of TV content consumption, because broadcast has a fixed carbon cost which can be amortized across its viewers, whereas the carbon footprint of catch-up streaming grows with each additional user. The BBC research proved that for all of its channels except one, Digital Terrestrial Television (i. e. , broadcast TV) has a smaller per-viewer carbon footprint than catch-up streaming. 12

VOD AND CATCH-UP TV HAVE HIGHER IMPACT THAN TV BROADCASTING / 2. - The impact of emission is much higher when the number of simoultaneous receiving devices is lower 13