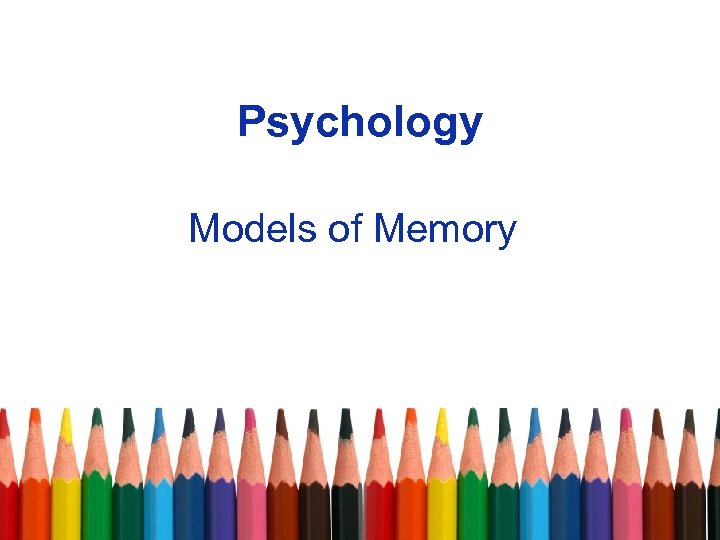 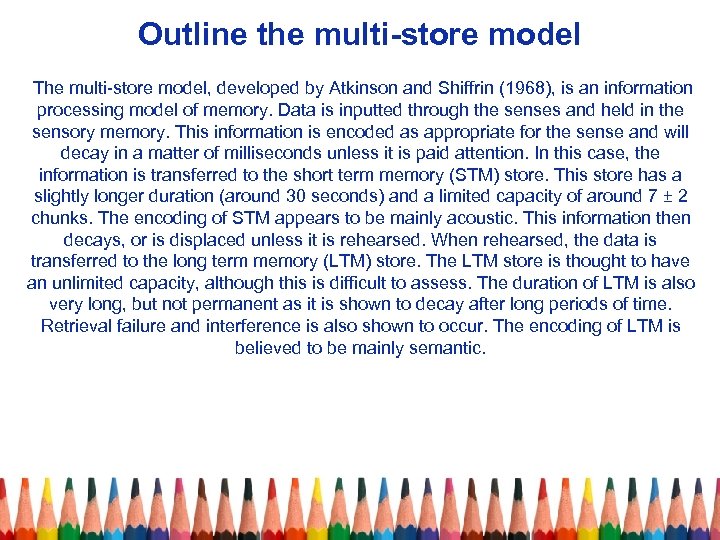 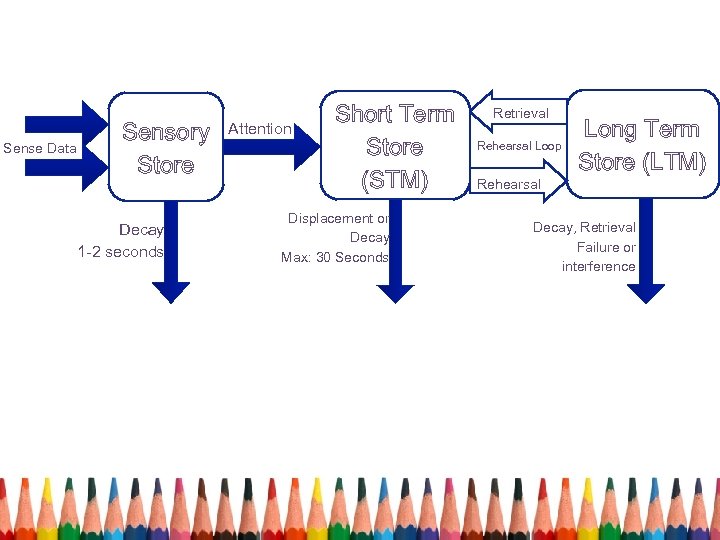 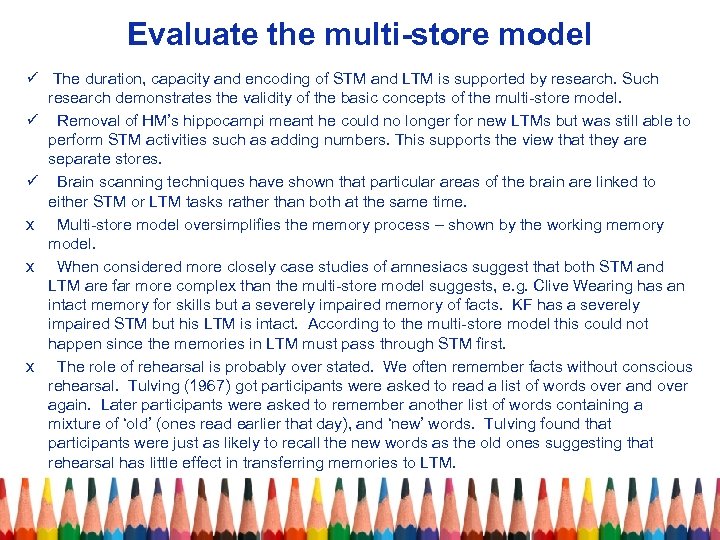 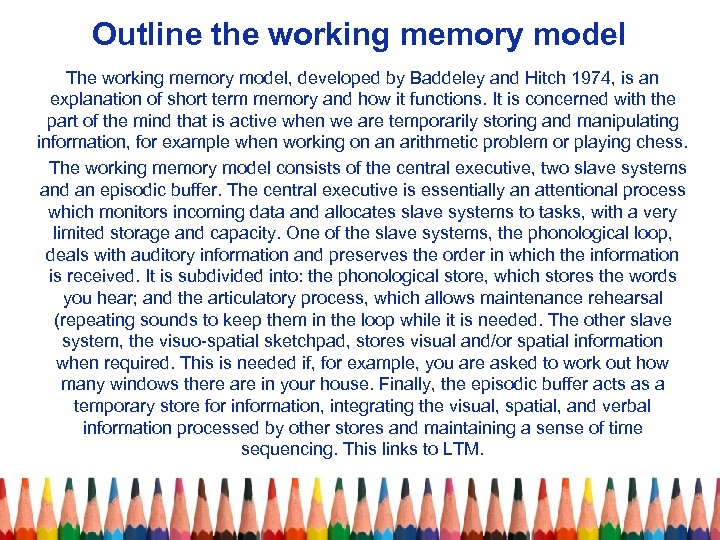 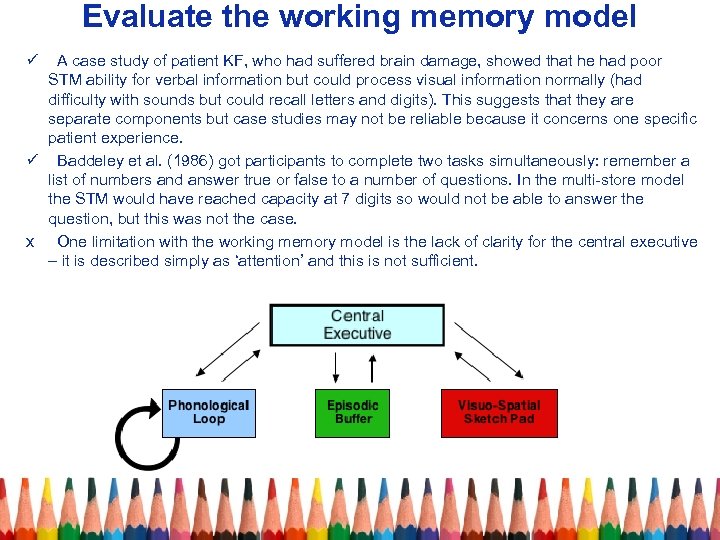 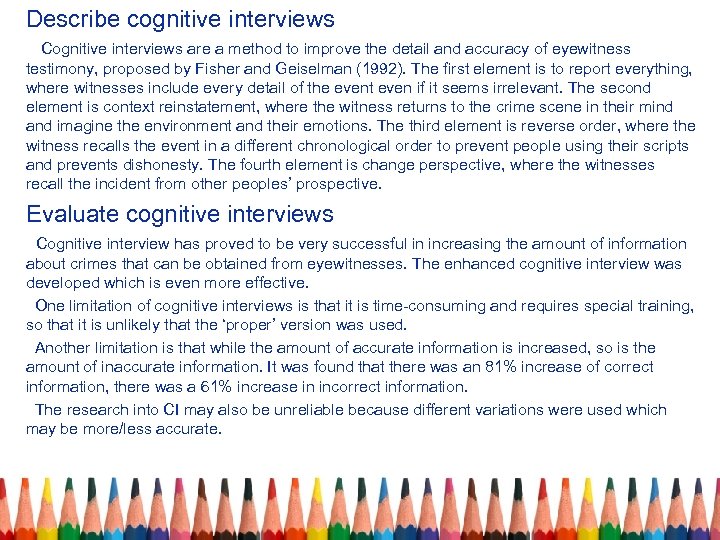 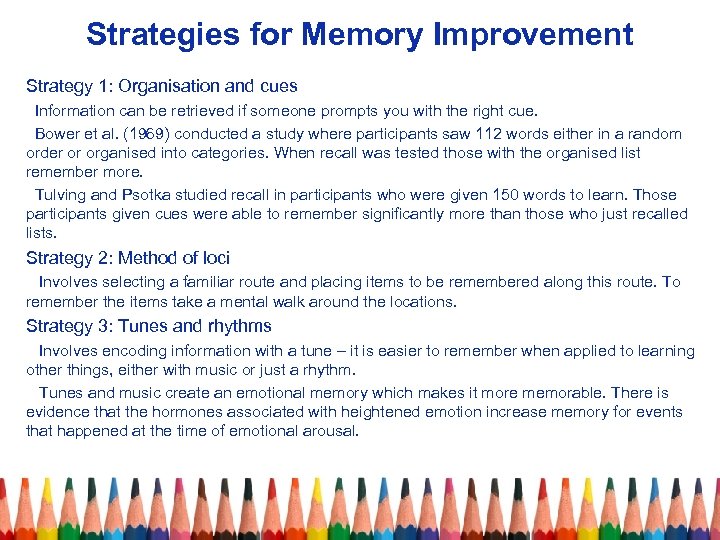 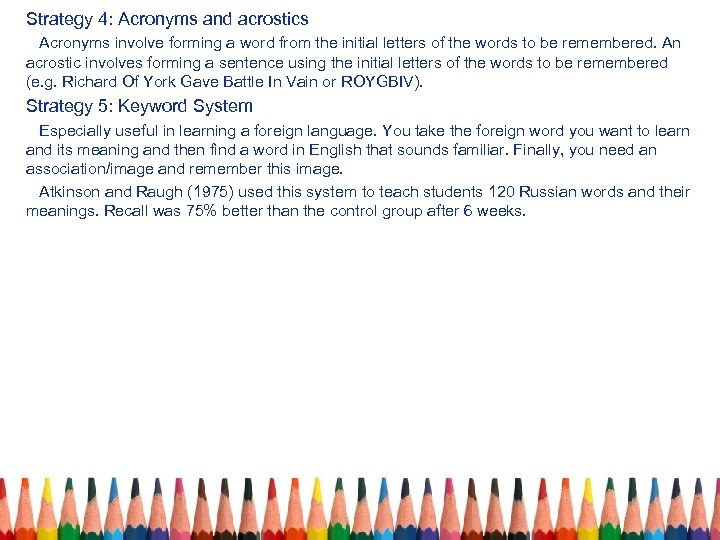 Outline the multi-store model The multi-store model, developed by Atkinson and Shiffrin (1968), is an information processing model of memory. Data is inputted through the senses and held in the sensory memory. This information is encoded as appropriate for the sense and will decay in a matter of milliseconds unless it is paid attention. In this case, the information is transferred to the short term memory (STM) store. This store has a slightly longer duration (around 30 seconds) and a limited capacity of around 7 ± 2 chunks. The encoding of STM appears to be mainly acoustic. This information then decays, or is displaced unless it is rehearsed. When rehearsed, the data is transferred to the long term memory (LTM) store. The LTM store is thought to have an unlimited capacity, although this is difficult to assess. The duration of LTM is also very long, but not permanent as it is shown to decay after long periods of time. Retrieval failure and interference is also shown to occur. The encoding of LTM is believed to be mainly semantic.

Evaluate the multi-store model ü The duration, capacity and encoding of STM and LTM is supported by research. Such research demonstrates the validity of the basic concepts of the multi-store model. ü Removal of HM’s hippocampi meant he could no longer for new LTMs but was still able to perform STM activities such as adding numbers. This supports the view that they are separate stores. ü Brain scanning techniques have shown that particular areas of the brain are linked to either STM or LTM tasks rather than both at the same time. x Multi-store model oversimplifies the memory process – shown by the working memory model. x When considered more closely case studies of amnesiacs suggest that both STM and LTM are far more complex than the multi-store model suggests, e. g. Clive Wearing has an intact memory for skills but a severely impaired memory of facts. KF has a severely impaired STM but his LTM is intact. According to the multi-store model this could not happen since the memories in LTM must pass through STM first. x The role of rehearsal is probably over stated. We often remember facts without conscious rehearsal. Tulving (1967) got participants were asked to read a list of words over and over again. Later participants were asked to remember another list of words containing a mixture of ‘old’ (ones read earlier that day), and ‘new’ words. Tulving found that participants were just as likely to recall the new words as the old ones suggesting that rehearsal has little effect in transferring memories to LTM.

Outline the working memory model The working memory model, developed by Baddeley and Hitch 1974, is an explanation of short term memory and how it functions. It is concerned with the part of the mind that is active when we are temporarily storing and manipulating information, for example when working on an arithmetic problem or playing chess. The working memory model consists of the central executive, two slave systems and an episodic buffer. The central executive is essentially an attentional process which monitors incoming data and allocates slave systems to tasks, with a very limited storage and capacity. One of the slave systems, the phonological loop, deals with auditory information and preserves the order in which the information is received. It is subdivided into: the phonological store, which stores the words you hear; and the articulatory process, which allows maintenance rehearsal (repeating sounds to keep them in the loop while it is needed. The other slave system, the visuo-spatial sketchpad, stores visual and/or spatial information when required. This is needed if, for example, you are asked to work out how many windows there are in your house. Finally, the episodic buffer acts as a temporary store for information, integrating the visual, spatial, and verbal information processed by other stores and maintaining a sense of time sequencing. This links to LTM.

Evaluate the working memory model ü A case study of patient KF, who had suffered brain damage, showed that he had poor STM ability for verbal information but could process visual information normally (had difficulty with sounds but could recall letters and digits). This suggests that they are separate components but case studies may not be reliable because it concerns one specific patient experience. ü Baddeley et al. (1986) got participants to complete two tasks simultaneously: remember a list of numbers and answer true or false to a number of questions. In the multi-store model the STM would have reached capacity at 7 digits so would not be able to answer the question, but this was not the case. x One limitation with the working memory model is the lack of clarity for the central executive – it is described simply as ‘attention’ and this is not sufficient.

Describe cognitive interviews Cognitive interviews are a method to improve the detail and accuracy of eyewitness testimony, proposed by Fisher and Geiselman (1992). The first element is to report everything, where witnesses include every detail of the event even if it seems irrelevant. The second element is context reinstatement, where the witness returns to the crime scene in their mind and imagine the environment and their emotions. The third element is reverse order, where the witness recalls the event in a different chronological order to prevent people using their scripts and prevents dishonesty. The fourth element is change perspective, where the witnesses recall the incident from other peoples’ prospective. Evaluate cognitive interviews Cognitive interview has proved to be very successful in increasing the amount of information about crimes that can be obtained from eyewitnesses. The enhanced cognitive interview was developed which is even more effective. One limitation of cognitive interviews is that it is time-consuming and requires special training, so that it is unlikely that the ‘proper’ version was used. Another limitation is that while the amount of accurate information is increased, so is the amount of inaccurate information. It was found that there was an 81% increase of correct information, there was a 61% increase in incorrect information. The research into CI may also be unreliable because different variations were used which may be more/less accurate.

Strategies for Memory Improvement Strategy 1: Organisation and cues Information can be retrieved if someone prompts you with the right cue. Bower et al. (1969) conducted a study where participants saw 112 words either in a random order or organised into categories. When recall was tested those with the organised list remember more. Tulving and Psotka studied recall in participants who were given 150 words to learn. Those participants given cues were able to remember significantly more than those who just recalled lists. Strategy 2: Method of loci Involves selecting a familiar route and placing items to be remembered along this route. To remember the items take a mental walk around the locations. Strategy 3: Tunes and rhythms Involves encoding information with a tune – it is easier to remember when applied to learning other things, either with music or just a rhythm. Tunes and music create an emotional memory which makes it more memorable. There is evidence that the hormones associated with heightened emotion increase memory for events that happened at the time of emotional arousal.

Strategy 4: Acronyms and acrostics Acronyms involve forming a word from the initial letters of the words to be remembered. An acrostic involves forming a sentence using the initial letters of the words to be remembered (e. g. Richard Of York Gave Battle In Vain or ROYGBIV). Strategy 5: Keyword System Especially useful in learning a foreign language. You take the foreign word you want to learn and its meaning and then find a word in English that sounds familiar. Finally, you need an association/image and remember this image. Atkinson and Raugh (1975) used this system to teach students 120 Russian words and their meanings. Recall was 75% better than the control group after 6 weeks.