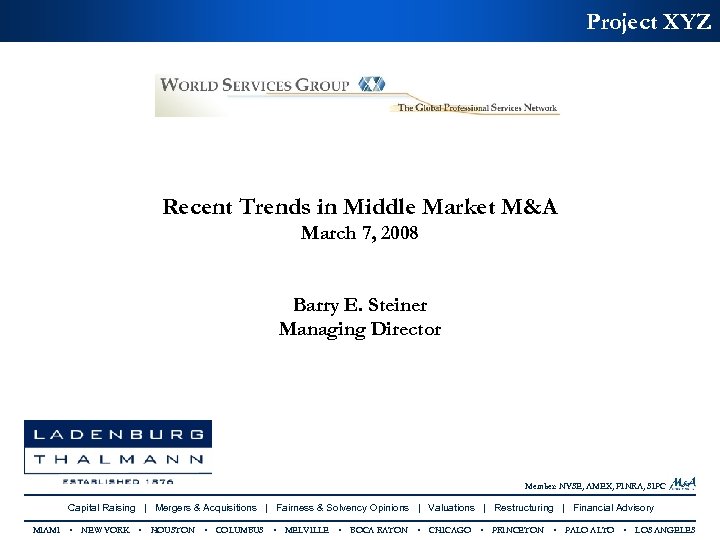 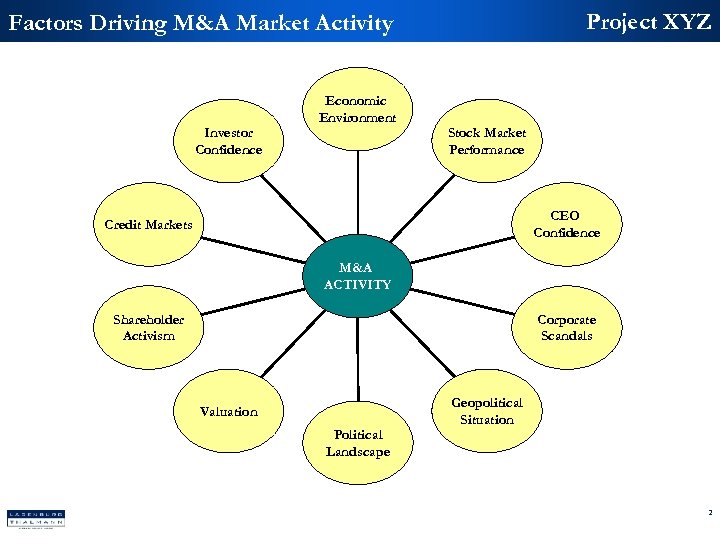 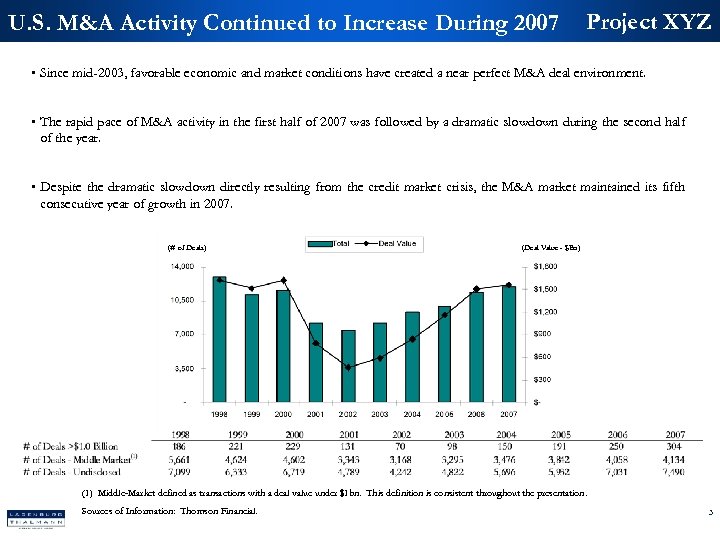 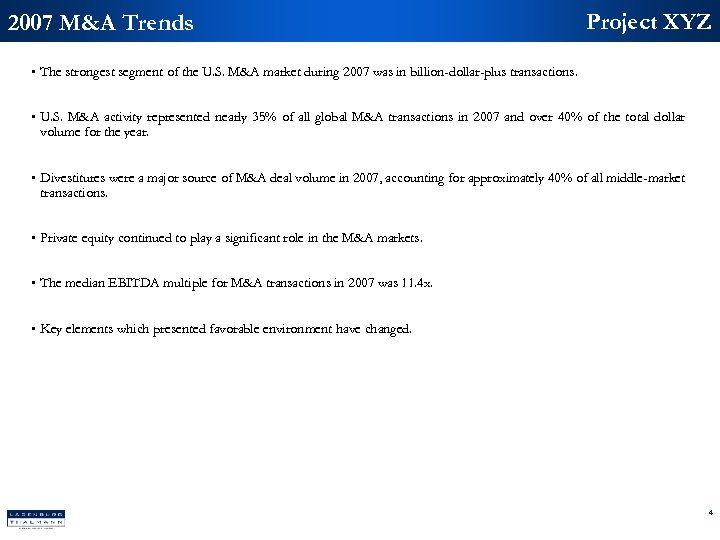 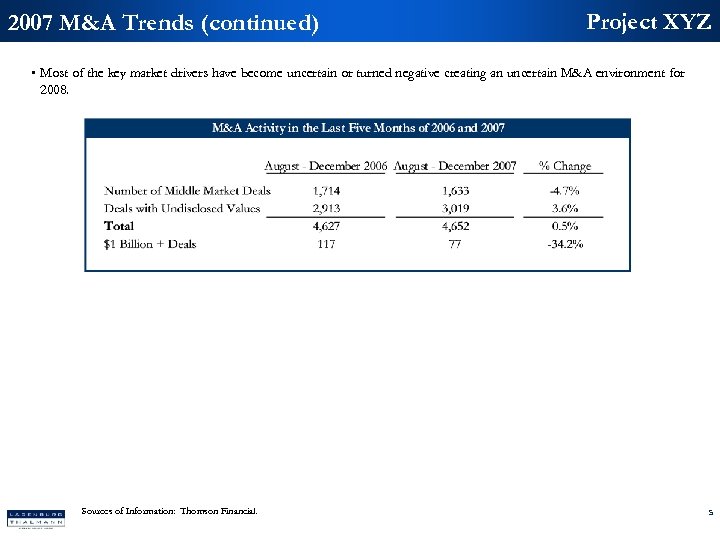 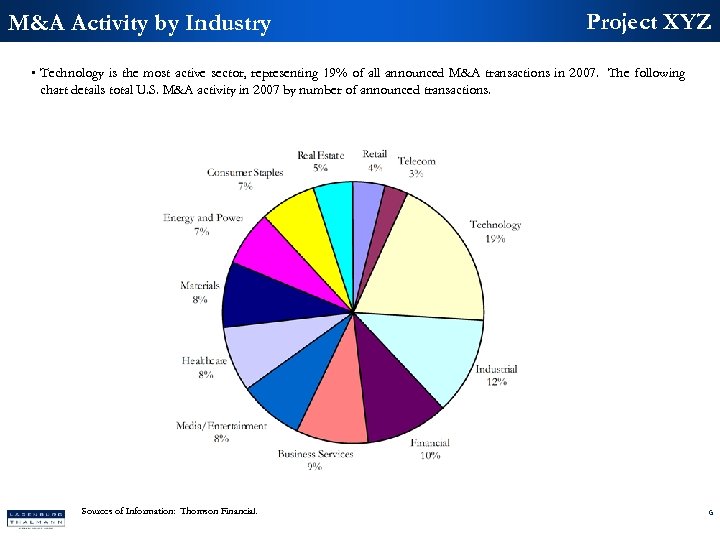 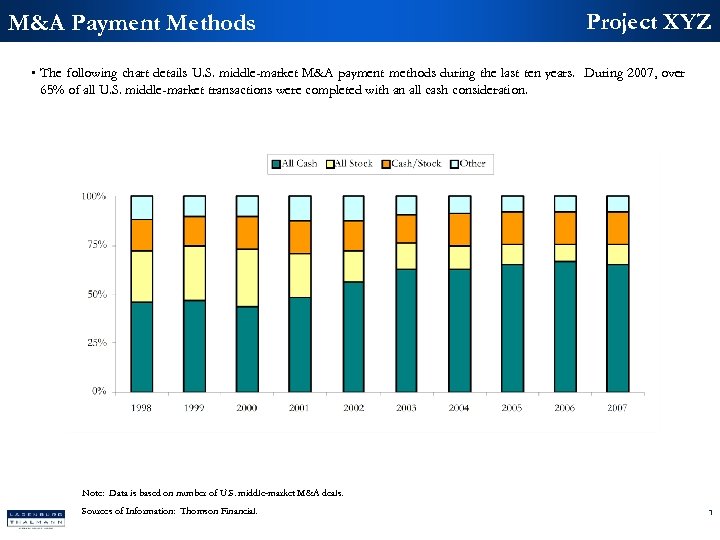 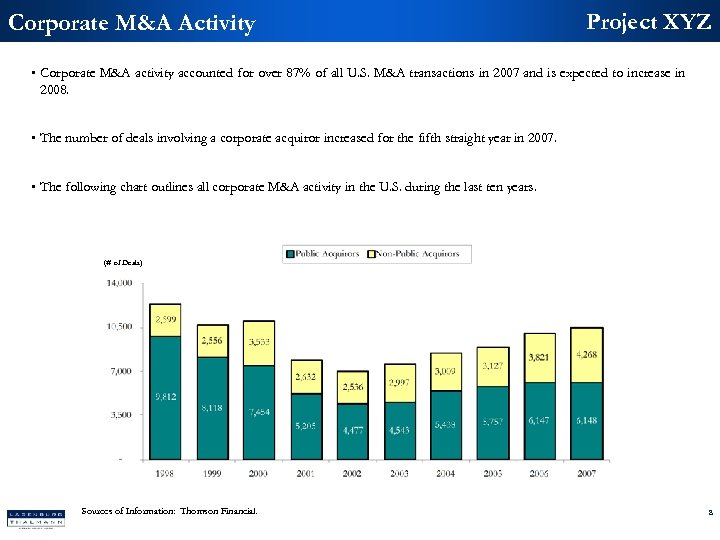 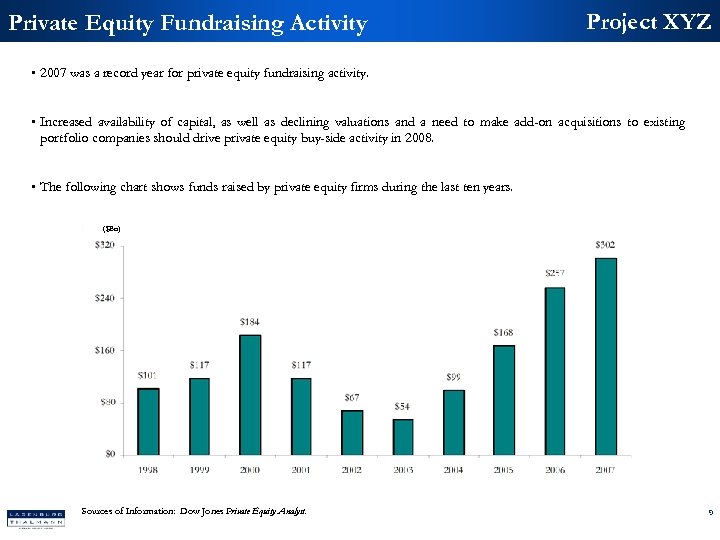 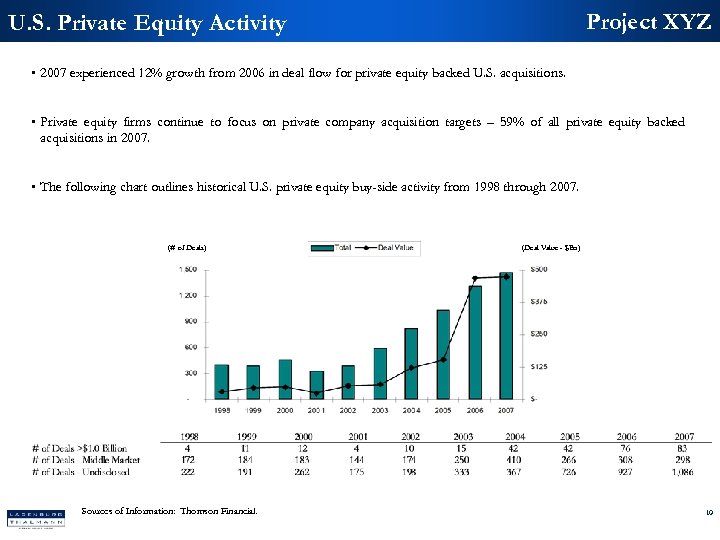 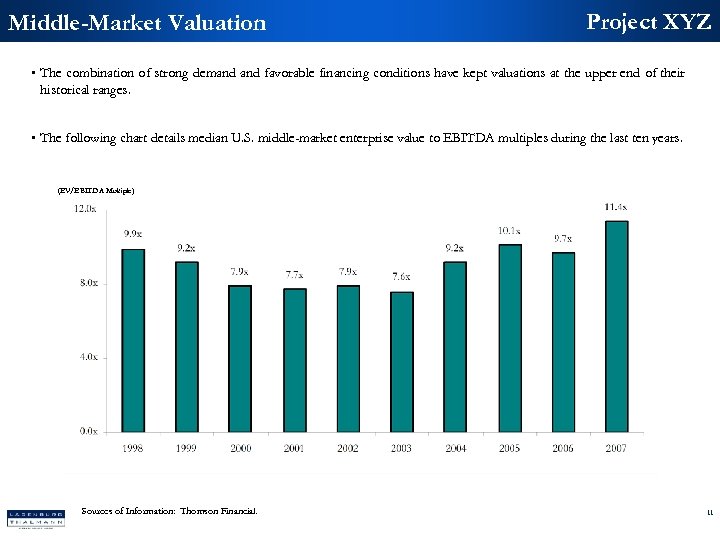 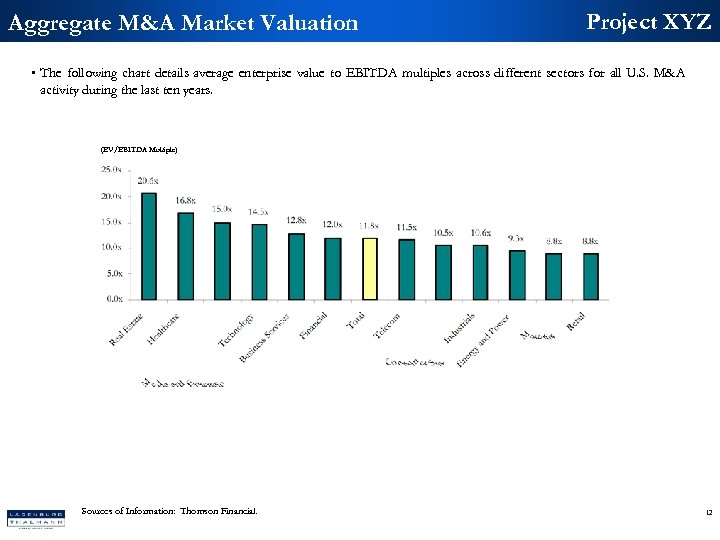 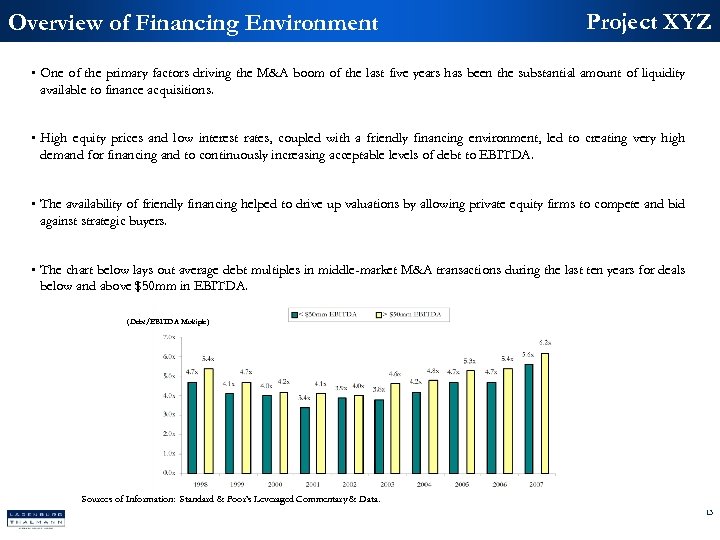 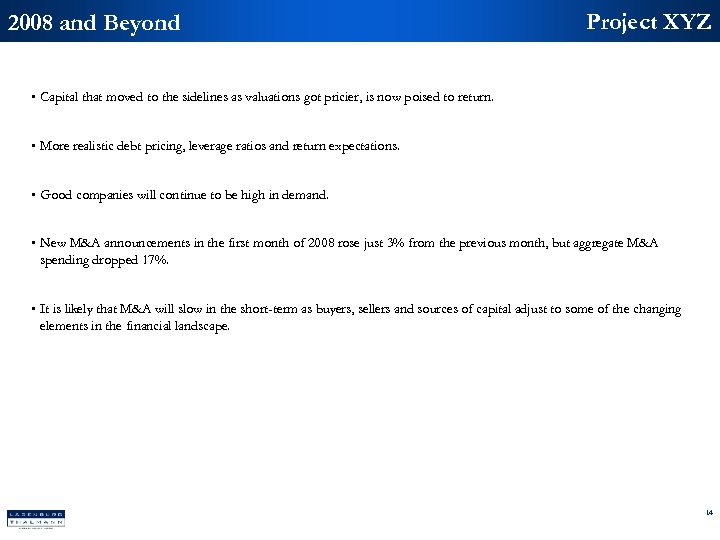 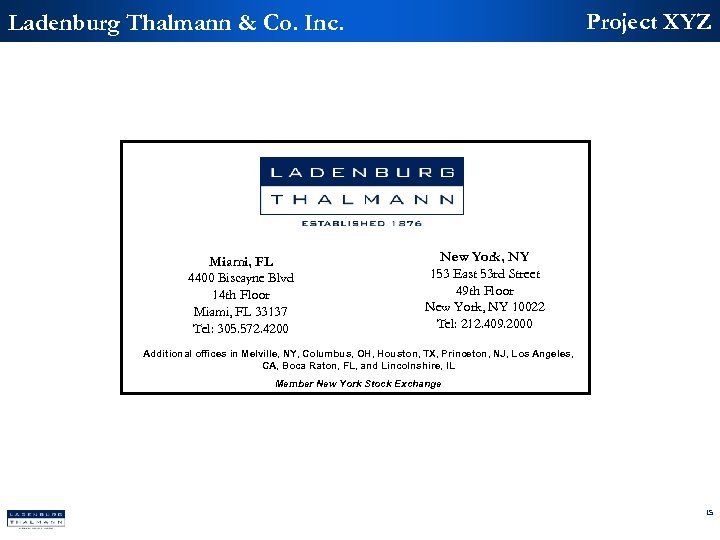 U. S. M&A Activity Continued to Increase During 2007 Project XYZ • Since mid-2003, favorable economic and market conditions have created a near perfect M&A deal environment. • The rapid pace of M&A activity in the first half of 2007 was followed by a dramatic slowdown during the second half of the year. • Despite the dramatic slowdown directly resulting from the credit market crisis, the M&A market maintained its fifth consecutive year of growth in 2007. (# of Deals) (Deal Value - $Bn) (1) Middle-Market defined as transactions with a deal value under $1 bn. This definition is consistent throughout the presentation. Sources of Information: Thomson Financial. 3

2007 M&A Trends Project XYZ • The strongest segment of the U. S. M&A market during 2007 was in billion-dollar-plus transactions. • U. S. M&A activity represented nearly 35% of all global M&A transactions in 2007 and over 40% of the total dollar volume for the year. • Divestitures were a major source of M&A deal volume in 2007, accounting for approximately 40% of all middle-market transactions. • Private equity continued to play a significant role in the M&A markets. • The median EBITDA multiple for M&A transactions in 2007 was 11. 4 x. • Key elements which presented favorable environment have changed. 4

M&A Activity by Industry Project XYZ • Technology is the most active sector, representing 19% of all announced M&A transactions in 2007. The following chart details total U. S. M&A activity in 2007 by number of announced transactions. Sources of Information: Thomson Financial. 6

Corporate M&A Activity Project XYZ • Corporate M&A activity accounted for over 87% of all U. S. M&A transactions in 2007 and is expected to increase in 2008. • The number of deals involving a corporate acquiror increased for the fifth straight year in 2007. • The following chart outlines all corporate M&A activity in the U. S. during the last ten years. (# of Deals) Sources of Information: Thomson Financial. 8

Overview of Financing Environment Project XYZ • One of the primary factors driving the M&A boom of the last five years has been the substantial amount of liquidity available to finance acquisitions. • High equity prices and low interest rates, coupled with a friendly financing environment, led to creating very high demand for financing and to continuously increasing acceptable levels of debt to EBITDA. • The availability of friendly financing helped to drive up valuations by allowing private equity firms to compete and bid against strategic buyers. • The chart below lays out average debt multiples in middle-market M&A transactions during the last ten years for deals below and above $50 mm in EBITDA. (Debt/EBITDA Multiple) Sources of Information: Standard & Poor’s Leveraged Commentary & Data. 13

2008 and Beyond Project XYZ • Capital that moved to the sidelines as valuations got pricier, is now poised to return. • More realistic debt pricing, leverage ratios and return expectations. • Good companies will continue to be high in demand. • New M&A announcements in the first month of 2008 rose just 3% from the previous month, but aggregate M&A spending dropped 17%. • It is likely that M&A will slow in the short-term as buyers, sellers and sources of capital adjust to some of the changing elements in the financial landscape. 14