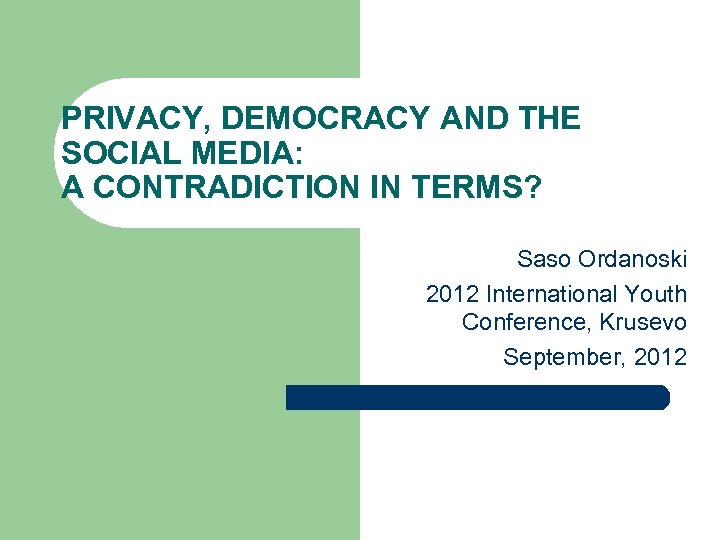 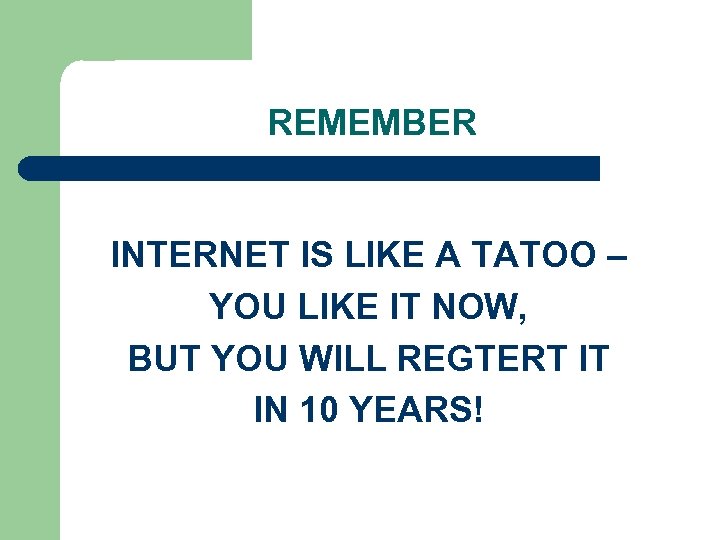 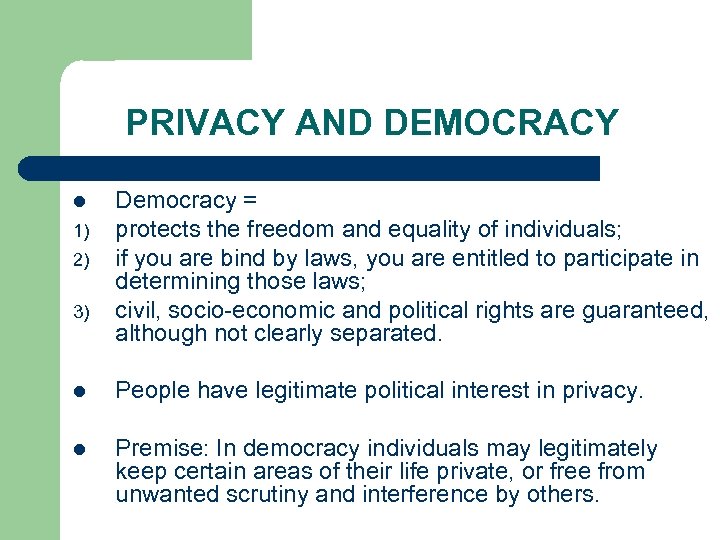 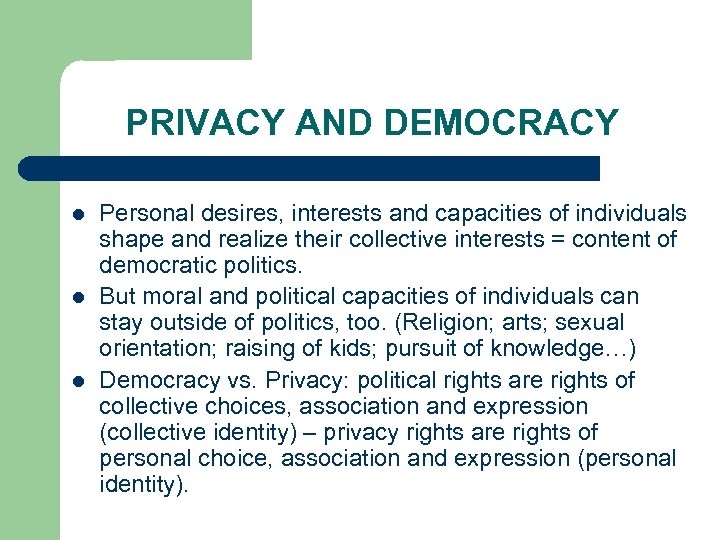 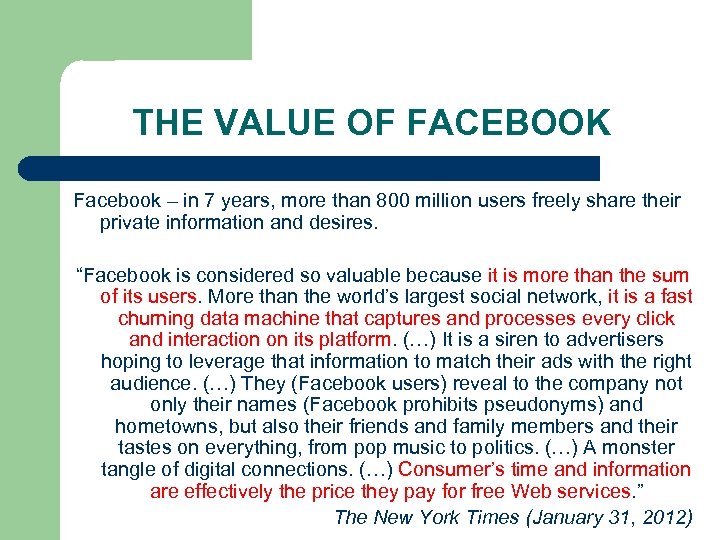 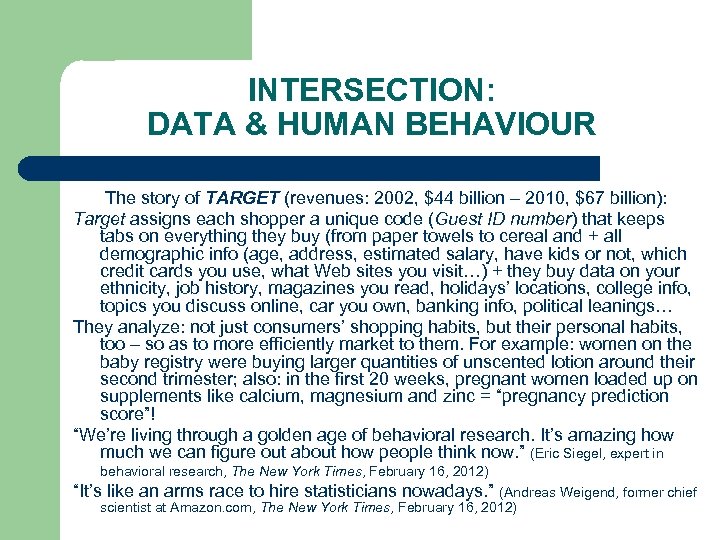 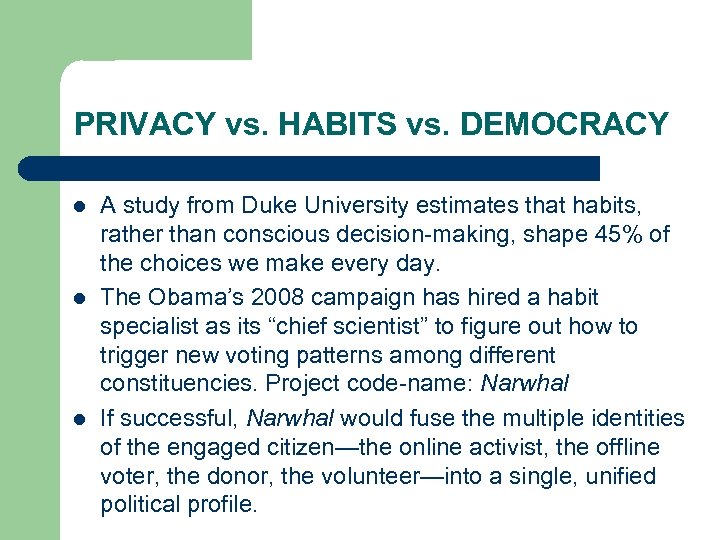 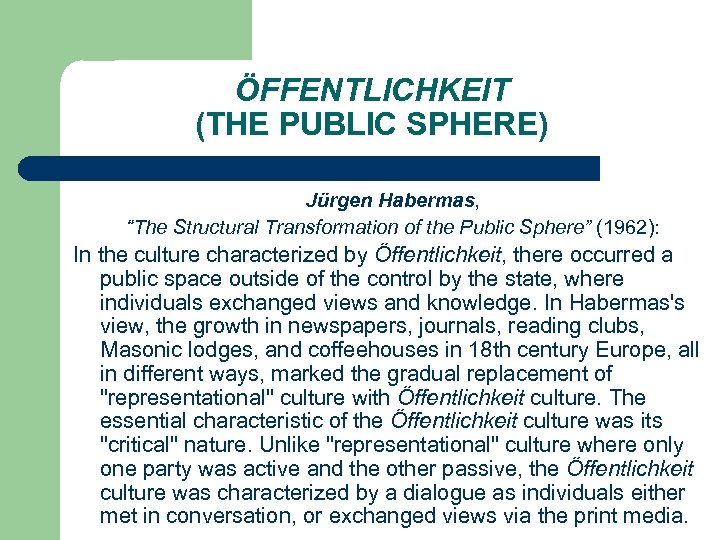 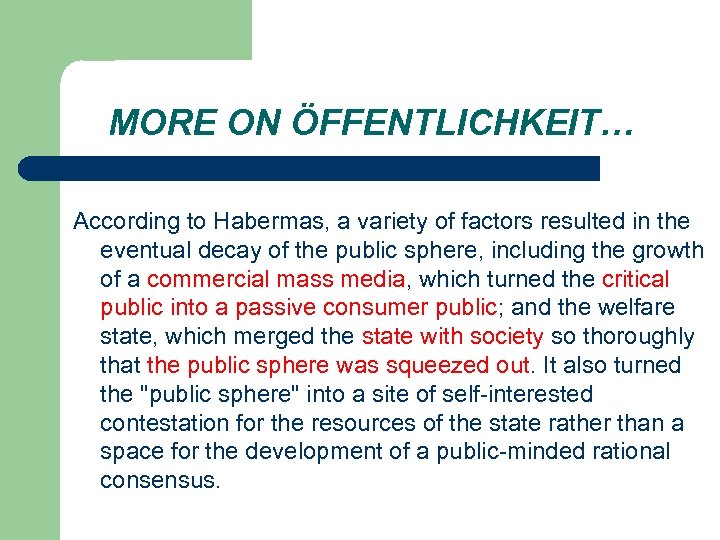 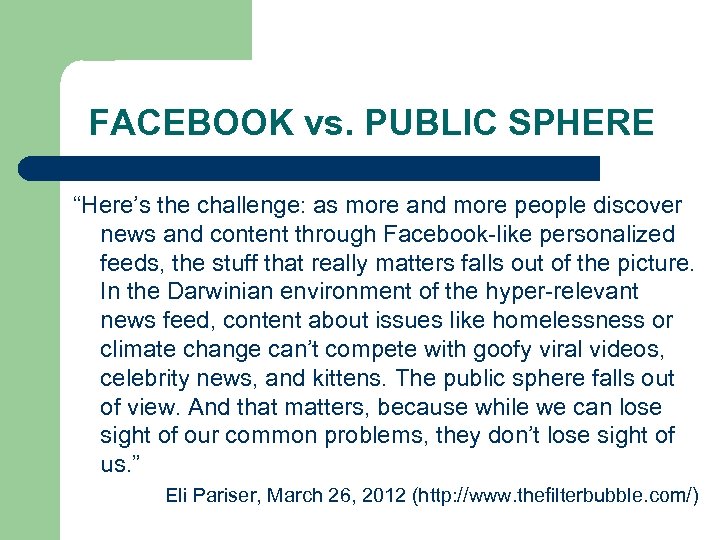 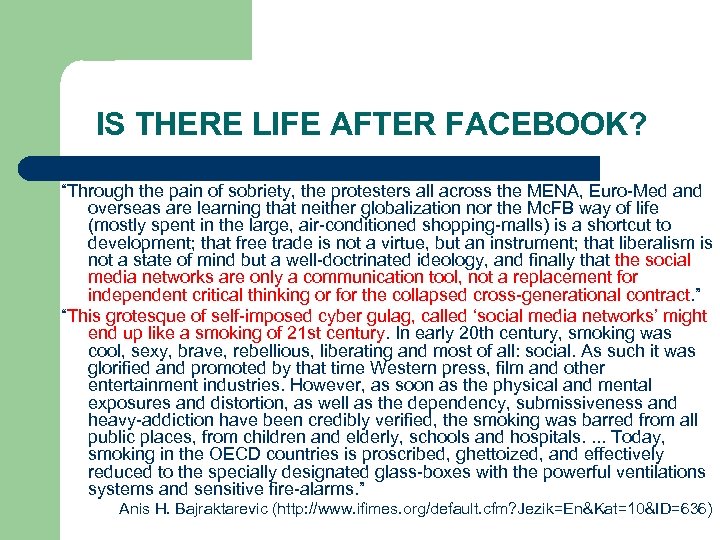 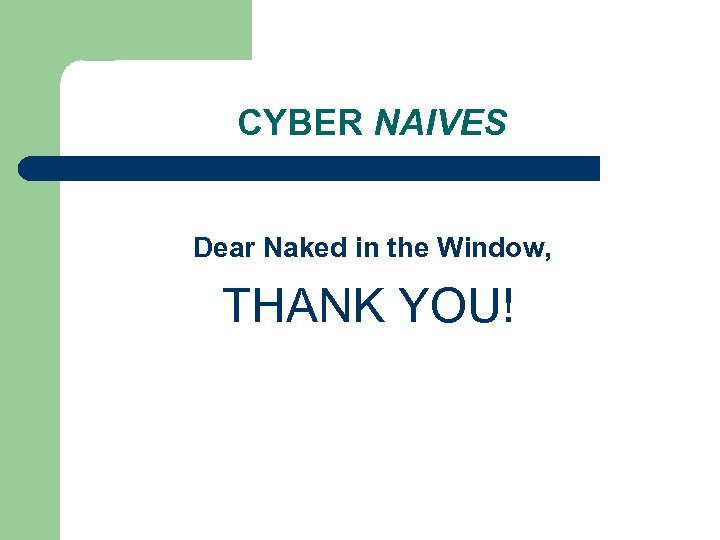 Скачать презентацию PRIVACY DEMOCRACY AND THE SOCIAL MEDIA A CONTRADICTION

REMEMBER INTERNET IS LIKE A TATOO – YOU LIKE IT NOW, BUT YOU WILL REGTERT IT IN 10 YEARS!

PRIVACY AND DEMOCRACY l 1) 2) 3) Democracy = protects the freedom and equality of individuals; if you are bind by laws, you are entitled to participate in determining those laws; civil, socio-economic and political rights are guaranteed, although not clearly separated. l People have legitimate political interest in privacy. l Premise: In democracy individuals may legitimately keep certain areas of their life private, or free from unwanted scrutiny and interference by others.

PRIVACY AND DEMOCRACY l l l Personal desires, interests and capacities of individuals shape and realize their collective interests = content of democratic politics. But moral and political capacities of individuals can stay outside of politics, too. (Religion; arts; sexual orientation; raising of kids; pursuit of knowledge…) Democracy vs. Privacy: political rights are rights of collective choices, association and expression (collective identity) – privacy rights are rights of personal choice, association and expression (personal identity).

PRIVACY +/- = ? Privacy is a bundle of rights, a bundle of sticks. How many sticks do you have to take out before you lose your bundle, your overall right? B. C. Rowe

THE VALUE OF FACEBOOK Facebook – in 7 years, more than 800 million users freely share their private information and desires. “Facebook is considered so valuable because it is more than the sum of its users. More than the world’s largest social network, it is a fast churning data machine that captures and processes every click and interaction on its platform. (…) It is a siren to advertisers hoping to leverage that information to match their ads with the right audience. (…) They (Facebook users) reveal to the company not only their names (Facebook prohibits pseudonyms) and hometowns, but also their friends and family members and their tastes on everything, from pop music to politics. (…) A monster tangle of digital connections. (…) Consumer’s time and information are effectively the price they pay for free Web services. ” The New York Times (January 31, 2012)

INTERSECTION: DATA & HUMAN BEHAVIOUR The story of TARGET (revenues: 2002, $44 billion – 2010, $67 billion): Target assigns each shopper a unique code (Guest ID number) that keeps tabs on everything they buy (from paper towels to cereal and + all demographic info (age, address, estimated salary, have kids or not, which credit cards you use, what Web sites you visit…) + they buy data on your ethnicity, job history, magazines you read, holidays’ locations, college info, topics you discuss online, car you own, banking info, political leanings… They analyze: not just consumers’ shopping habits, but their personal habits, too – so as to more efficiently market to them. For example: women on the baby registry were buying larger quantities of unscented lotion around their second trimester; also: in the first 20 weeks, pregnant women loaded up on supplements like calcium, magnesium and zinc = “pregnancy prediction score”! “We’re living through a golden age of behavioral research. It’s amazing how much we can figure out about how people think now. ” (Eric Siegel, expert in behavioral research, The New York Times, February 16, 2012) “It’s like an arms race to hire statisticians nowadays. ” (Andreas Weigend, former chief scientist at Amazon. com, The New York Times, February 16, 2012)

PRIVACY vs. HABITS vs. DEMOCRACY l l l A study from Duke University estimates that habits, rather than conscious decision-making, shape 45% of the choices we make every day. The Obama’s 2008 campaign has hired a habit specialist as its “chief scientist” to figure out how to trigger new voting patterns among different constituencies. Project code-name: Narwhal If successful, Narwhal would fuse the multiple identities of the engaged citizen—the online activist, the offline voter, the donor, the volunteer—into a single, unified political profile.

ÖFFENTLICHKEIT (THE PUBLIC SPHERE) Jürgen Habermas, “The Structural Transformation of the Public Sphere” (1962): In the culture characterized by Öffentlichkeit, there occurred a public space outside of the control by the state, where individuals exchanged views and knowledge. In Habermas's view, the growth in newspapers, journals, reading clubs, Masonic lodges, and coffeehouses in 18 th century Europe, all in different ways, marked the gradual replacement of "representational" culture with Öffentlichkeit culture. The essential characteristic of the Öffentlichkeit culture was its "critical" nature. Unlike "representational" culture where only one party was active and the other passive, the Öffentlichkeit culture was characterized by a dialogue as individuals either met in conversation, or exchanged views via the print media.

MORE ON ÖFFENTLICHKEIT… According to Habermas, a variety of factors resulted in the eventual decay of the public sphere, including the growth of a commercial mass media, which turned the critical public into a passive consumer public; and the welfare state, which merged the state with society so thoroughly that the public sphere was squeezed out. It also turned the "public sphere" into a site of self-interested contestation for the resources of the state rather than a space for the development of a public-minded rational consensus.

FACEBOOK vs. PUBLIC SPHERE “Here’s the challenge: as more and more people discover news and content through Facebook-like personalized feeds, the stuff that really matters falls out of the picture. In the Darwinian environment of the hyper-relevant news feed, content about issues like homelessness or climate change can’t compete with goofy viral videos, celebrity news, and kittens. The public sphere falls out of view. And that matters, because while we can lose sight of our common problems, they don’t lose sight of us. ” Eli Pariser, March 26, 2012 (http: //www. thefilterbubble. com/)

FACEBOOK vs. PUBLIC SPHERE “The internet revolution fragmented the public square and re-drew the borders of political communities. The irony here is that the free flow of information became a torrent that threatened to wash away all context and nuance in public discussions. Social media may have empowered people to stand up to the powerful (and this point is debatable), but it has done nothing to strengthen the deliberative and representative processes of democracy. In other words, it has shown it can tear down society, as in Egypt, but not that it can contribute to building up a new society in its place. The rapid advances in cognitive science have helped us understand how people think, but that new knowledge threatens to become a powerful instrument of manipulation. This would mark a radical break from the Enlightenment tradition of idea-based politics, making Karl Rove, not Karl Popper, the avatar of 21 st-century neo -democratic politics. ” Ivan Krastev, in The American Interest, March/April, 2012.

IS THERE LIFE AFTER FACEBOOK? “Through the pain of sobriety, the protesters all across the MENA, Euro-Med and overseas are learning that neither globalization nor the Mc. FB way of life (mostly spent in the large, air-conditioned shopping-malls) is a shortcut to development; that free trade is not a virtue, but an instrument; that liberalism is not a state of mind but a well-doctrinated ideology, and finally that the social media networks are only a communication tool, not a replacement for independent critical thinking or for the collapsed cross-generational contract. ” “This grotesque of self-imposed cyber gulag, called ‘social media networks’ might end up like a smoking of 21 st century. In early 20 th century, smoking was cool, sexy, brave, rebellious, liberating and most of all: social. As such it was glorified and promoted by that time Western press, film and other entertainment industries. However, as soon as the physical and mental exposures and distortion, as well as the dependency, submissiveness and heavy-addiction have been credibly verified, the smoking was barred from all public places, from children and elderly, schools and hospitals. . Today, smoking in the OECD countries is proscribed, ghettoized, and effectively reduced to the specially designated glass-boxes with the powerful ventilations systems and sensitive fire-alarms. ” Anis H. Bajraktarevic (http: //www. ifimes. org/default. cfm? Jezik=En&Kat=10&ID=636)

CYBER NAIVES Dear Naked in the Window, THANK YOU!