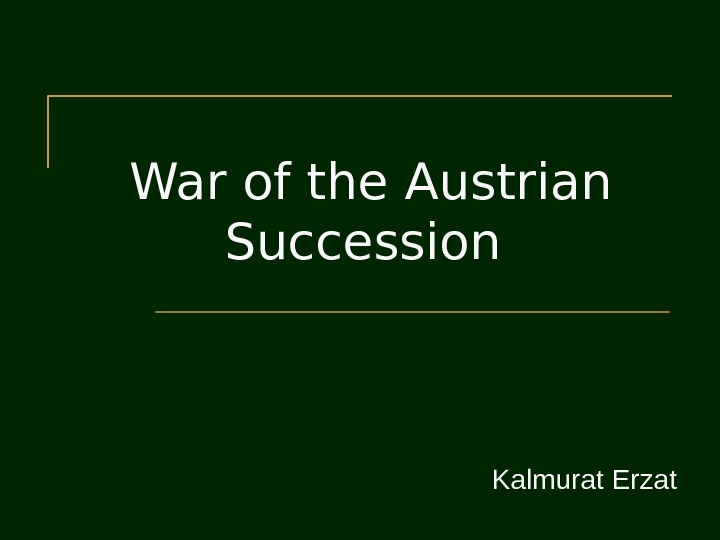 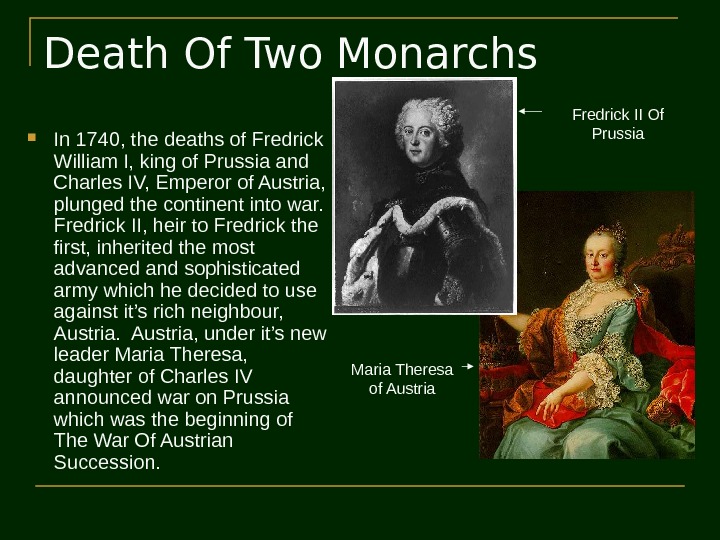 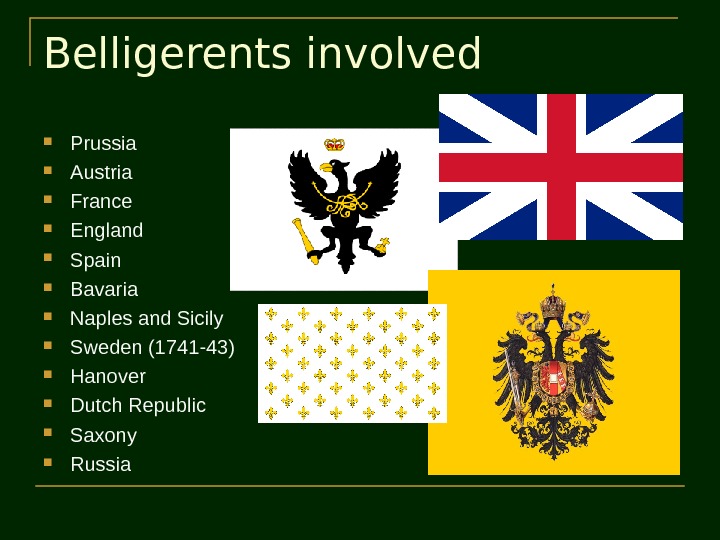 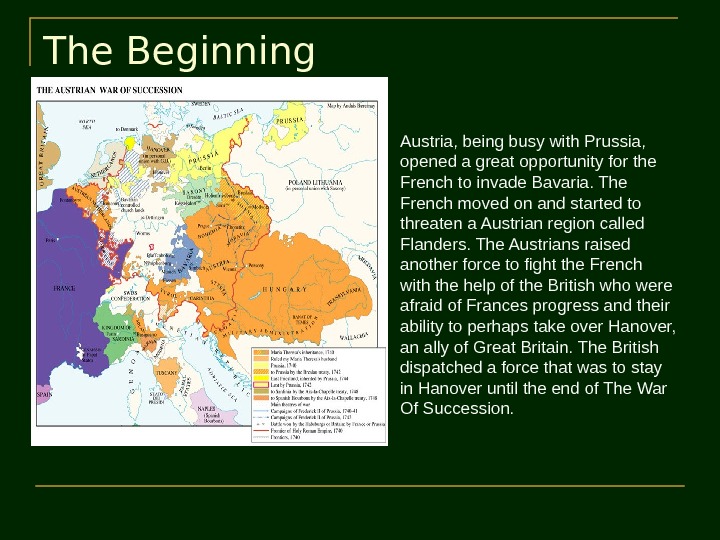 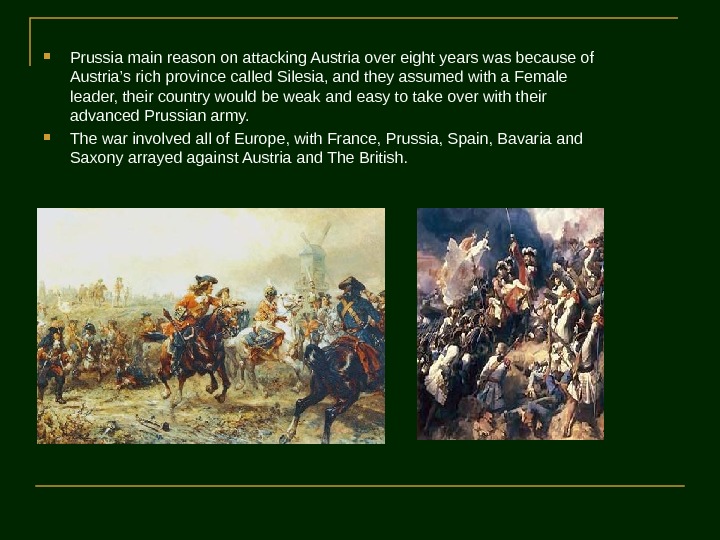 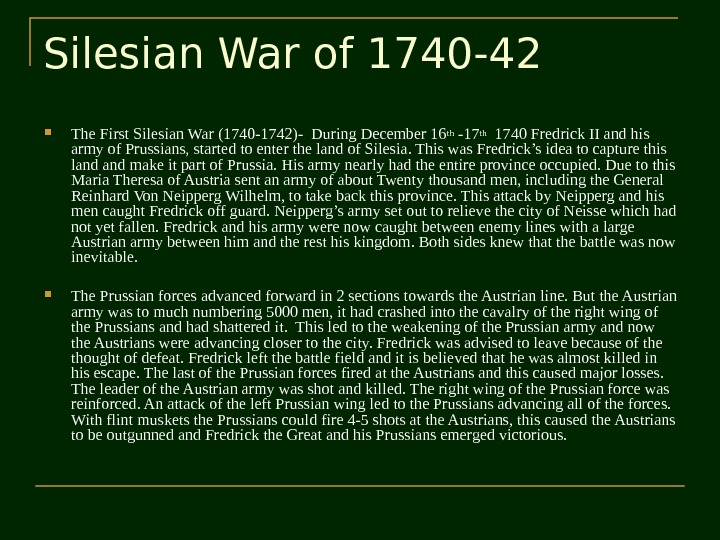 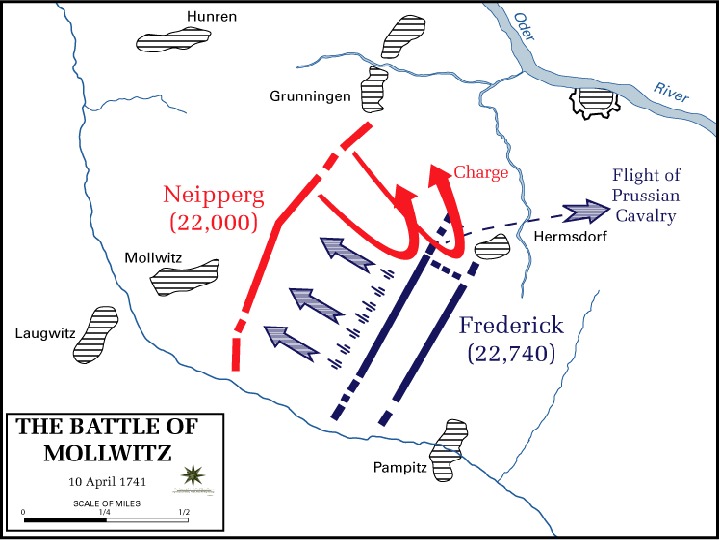 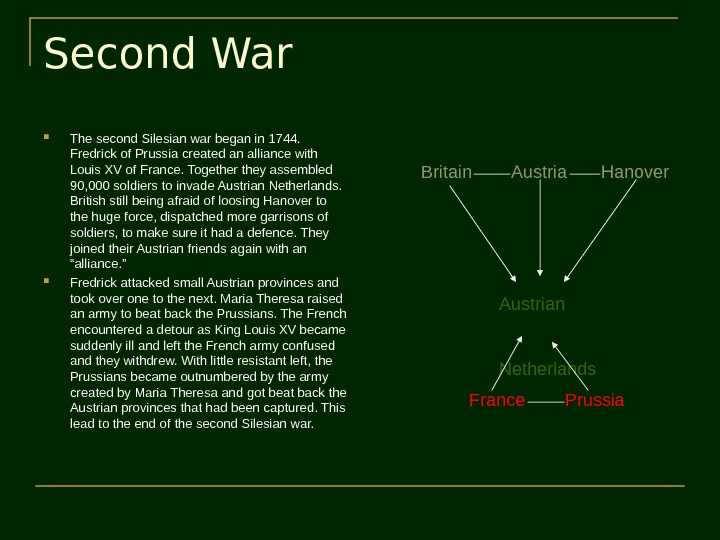 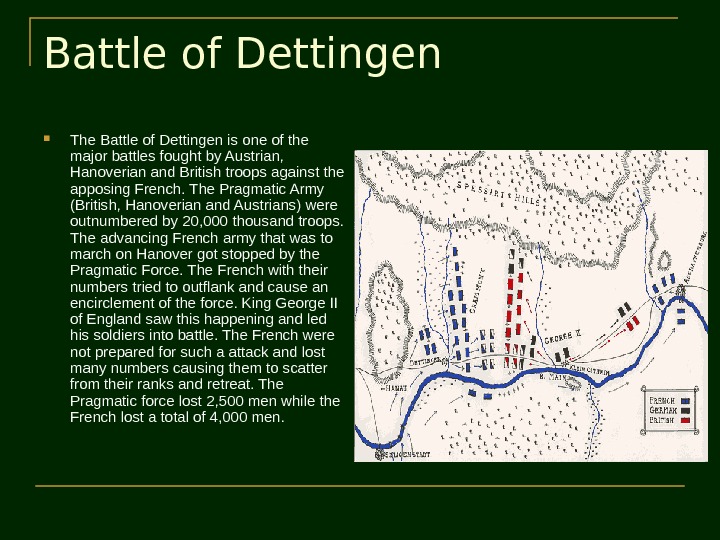 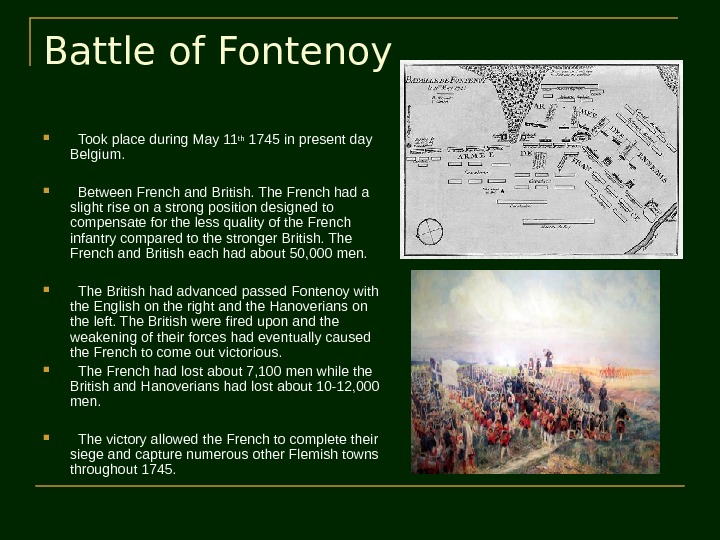 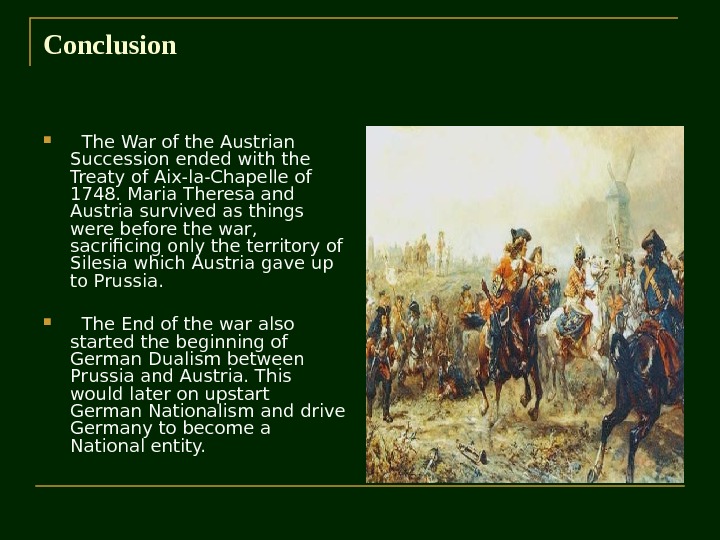 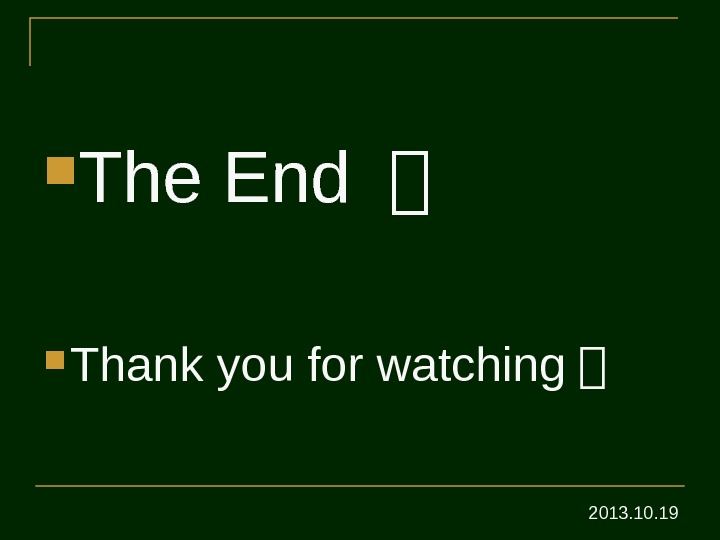 Death Of Two Monarchs In 1740, the deaths of Fredrick William I, king of Prussia and Charles IV, Emperor of Austria, plunged the continent into war. Fredrick II, heir to Fredrick the first, inherited the most advanced and sophisticated army which he decided to use against it’s rich neighbour, Austria, under it’s new leader Maria Theresa, daughter of Charles IV announced war on Prussia which was the beginning of The War Of Austrian Succession. Maria Theresa of Austria Fredrick II Of Prussia

The Beginning Austria, being busy with Prussia, opened a great opportunity for the French to invade Bavaria. The French moved on and started to threaten a Austrian region called Flanders. The Austrians raised another force to fight the French with the help of the British who were afraid of Frances progress and their ability to perhaps take over Hanover, an ally of Great Britain. The British dispatched a force that was to stay in Hanover until the end of The War Of Succession.

Prussia main reason on attacking Austria over eight years was because of Austria’s rich province called Silesia, and they assumed with a Female leader, their country would be weak and easy to take over with their advanced Prussian army. The war involved all of Europe, with France, Prussia, Spain, Bavaria and Saxony arrayed against Austria and The British.

Silesian War of 1740 -42 The First Silesian War (1740 -1742)- During December 16 th -17 th 1740 Fredrick II and his army of Prussians, started to enter the land of Silesia. This was Fredrick’s idea to capture this land make it part of Prussia. His army nearly had the entire province occupied. Due to this Maria Theresa of Austria sent an army of about Twenty thousand men, including the General Reinhard Von Neipperg Wilhelm, to take back this province. This attack by Neipperg and his men caught Fredrick off guard. Neipperg’s army set out to relieve the city of Neisse which had not yet fallen. Fredrick and his army were now caught between enemy lines with a large Austrian army between him and the rest his kingdom. Both sides knew that the battle was now inevitable. The Prussian forces advanced forward in 2 sections towards the Austrian line. But the Austrian army was to much numbering 5000 men, it had crashed into the cavalry of the right wing of the Prussians and had shattered it. This led to the weakening of the Prussian army and now the Austrians were advancing closer to the city. Fredrick was advised to leave because of the thought of defeat. Fredrick left the battle field and it is believed that he was almost killed in his escape. The last of the Prussian forces fired at the Austrians and this caused major losses. The leader of the Austrian army was shot and killed. The right wing of the Prussian force was reinforced. An attack of the left Prussian wing led to the Prussians advancing all of the forces. With flint muskets the Prussians could fire 4 -5 shots at the Austrians, this caused the Austrians to be outgunned and Fredrick the Great and his Prussians emerged victorious.

Second War The second Silesian war began in 1744. Fredrick of Prussia created an alliance with Louis XV of France. Together they assembled 90, 000 soldiers to invade Austrian Netherlands. British still being afraid of loosing Hanover to the huge force, dispatched more garrisons of soldiers, to make sure it had a defence. They joined their Austrian friends again with an “alliance. ” Fredrick attacked small Austrian provinces and took over one to the next. Maria Theresa raised an army to beat back the Prussians. The French encountered a detour as King Louis XV became suddenly ill and left the French army confused and they withdrew. With little resistant left, the Prussians became outnumbered by the army created by Maria Theresa and got beat back the Austrian provinces that had been captured. This lead to the end of the second Silesian war. Britain Austria Hanover France Prussia. Austrian Netherlands

Battle of Dettingen The Battle of Dettingen is one of the major battles fought by Austrian, Hanoverian and British troops against the apposing French. The Pragmatic Army (British, Hanoverian and Austrians) were outnumbered by 20, 000 thousand troops. The advancing French army that was to march on Hanover got stopped by the Pragmatic Force. The French with their numbers tried to outflank and cause an encirclement of the force. King George II of England saw this happening and led his soldiers into battle. The French were not prepared for such a attack and lost many numbers causing them to scatter from their ranks and retreat. The Pragmatic force lost 2, 500 men while the French lost a total of 4, 000 men.

Battle of Fontenoy Took place during May 11 th 1745 in present day Belgium. Between French and British. The French had a slight rise on a strong position designed to compensate for the less quality of the French infantry compared to the stronger British. The French and British each had about 50, 000 men. The British had advanced passed Fontenoy with the English on the right and the Hanoverians on the left. The British were fired upon and the weakening of their forces had eventually caused the French to come out victorious. The French had lost about 7, 100 men while the British and Hanoverians had lost about 10 -12, 000 men. The victory allowed the French to complete their siege and capture numerous other Flemish towns throughout 1745.

War outside of Europe The War of Austrian Succession not only took place in Europe, but also across the Atlantic and in India. In North America the conflict was known as King Georges war, and the largest event was the capture of the French Fortress in Louisbourg. This take over was commanded by Colonel William Pepperrell of Maine. Louisbourg was the home of privateers. During the peace between British and French it was returned to France. In India, one of the major causes of the Carnatic War was that both French and British wanted to place their own royal candidates on the Austrian throne.

Conclusion The War of the Austrian Succession ended with the Treaty of Aix-la-Chapelle of 1748. Maria Theresa and Austria survived as things were before the war, sacrificing only the territory of Silesia which Austria gave up to Prussia. The End of the war also started the beginning of German Dualism between Prussia and Austria. This would later on upstart German Nationalism and drive Germany to become a National entity.