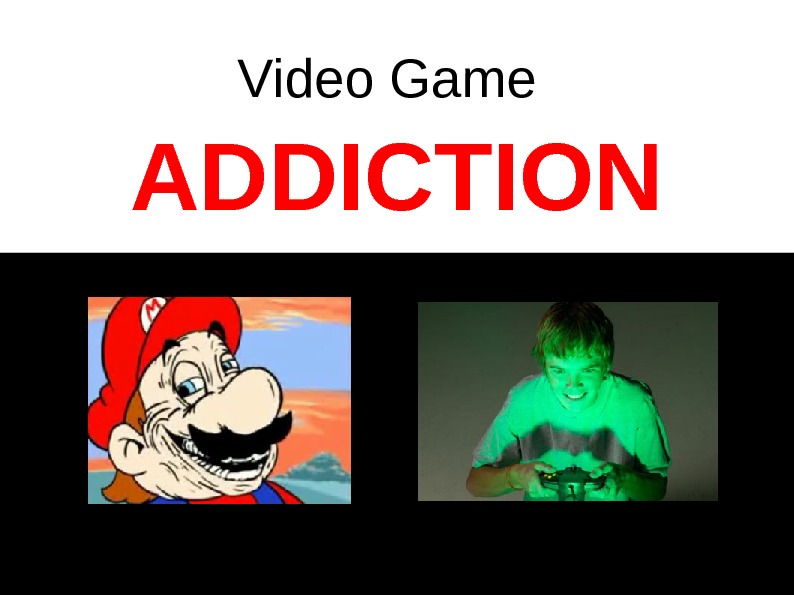 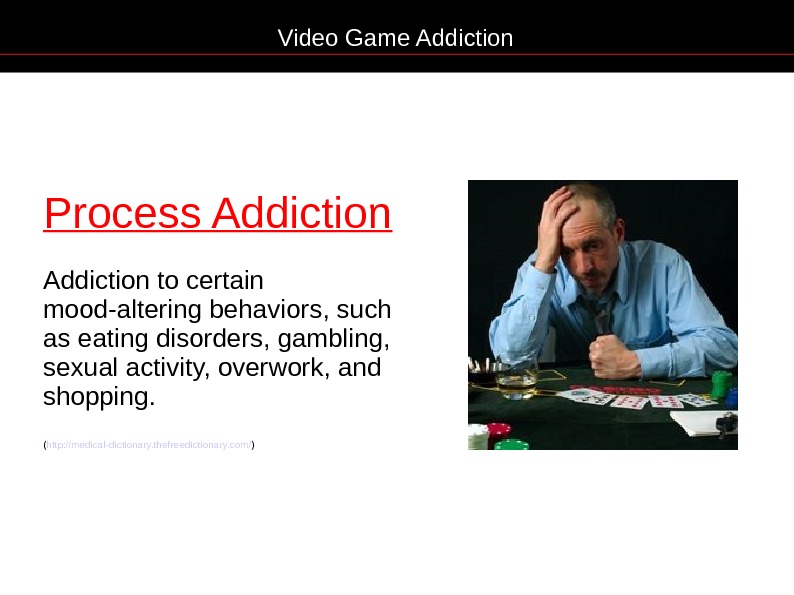 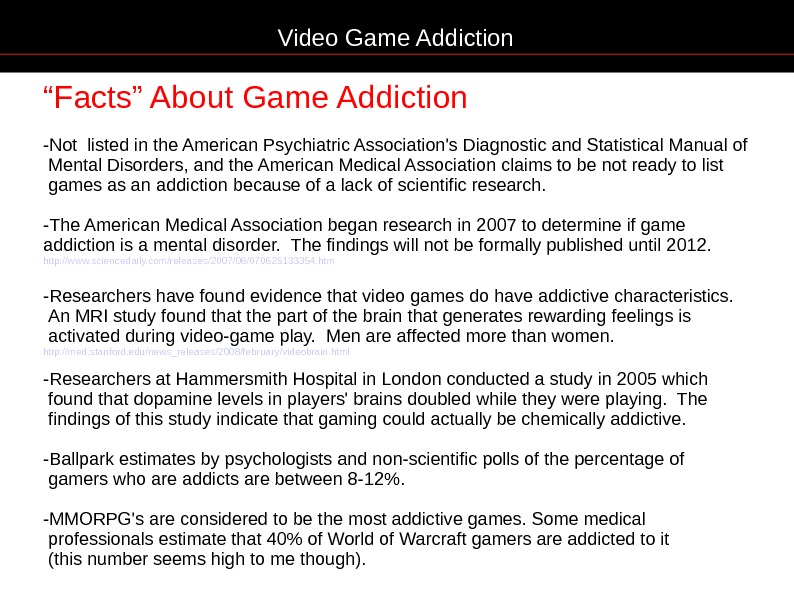 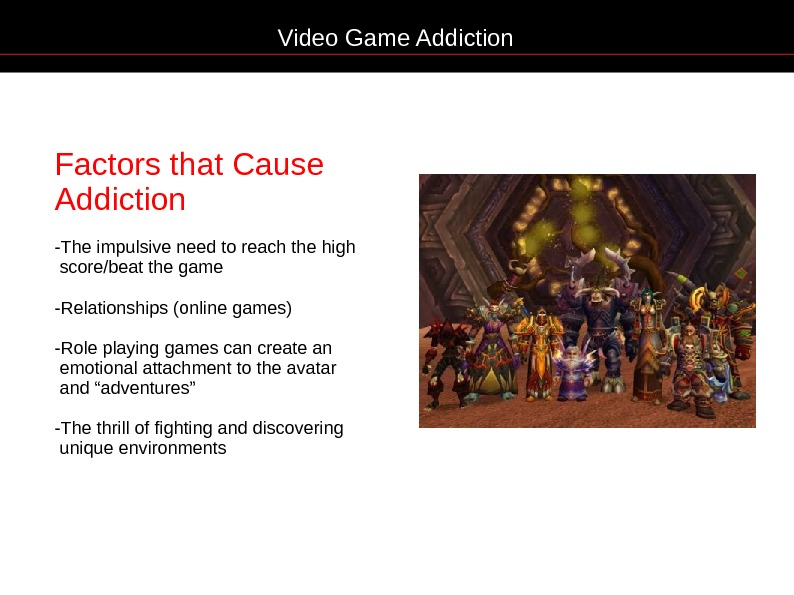 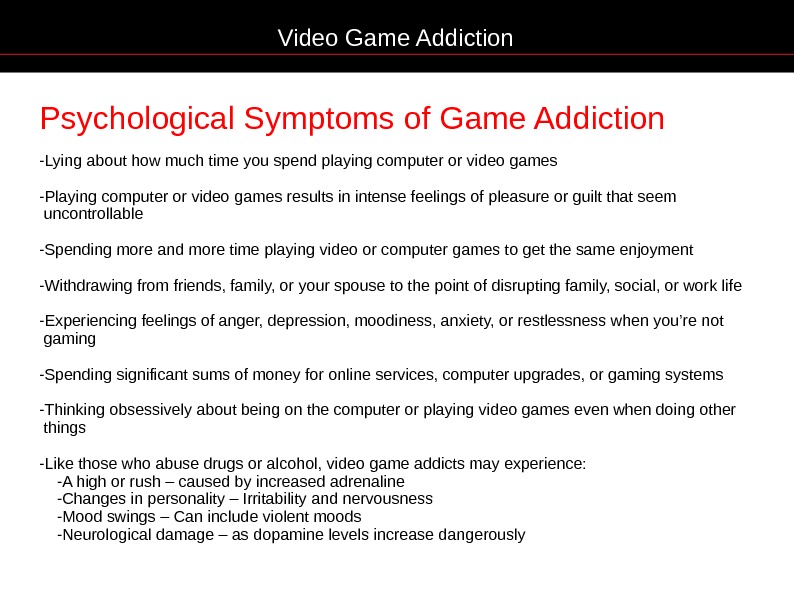 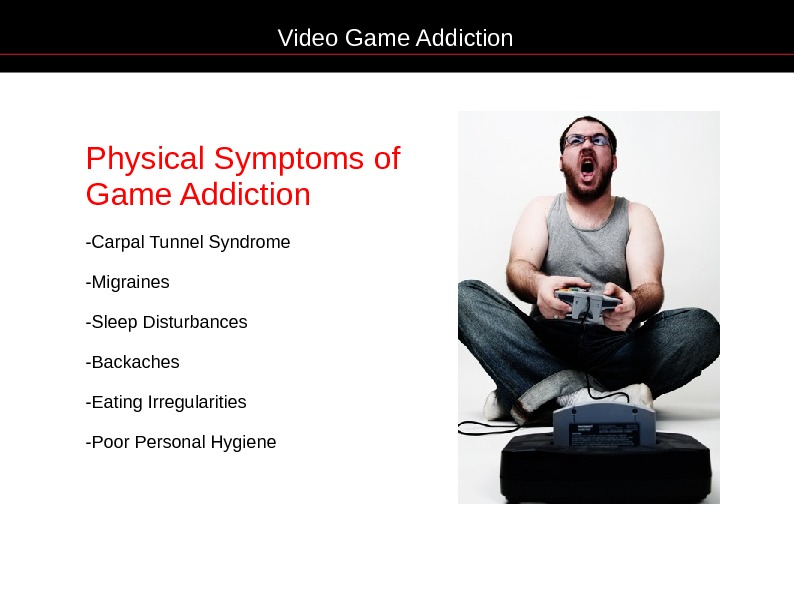 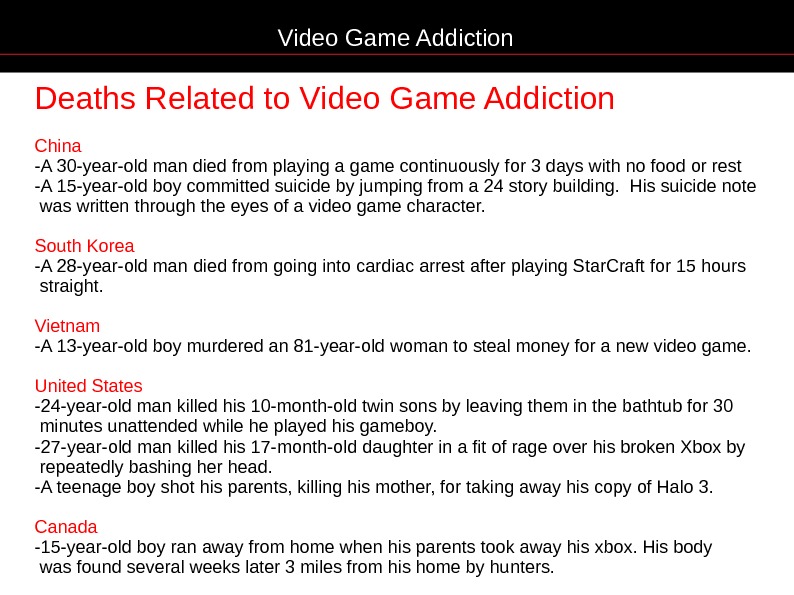 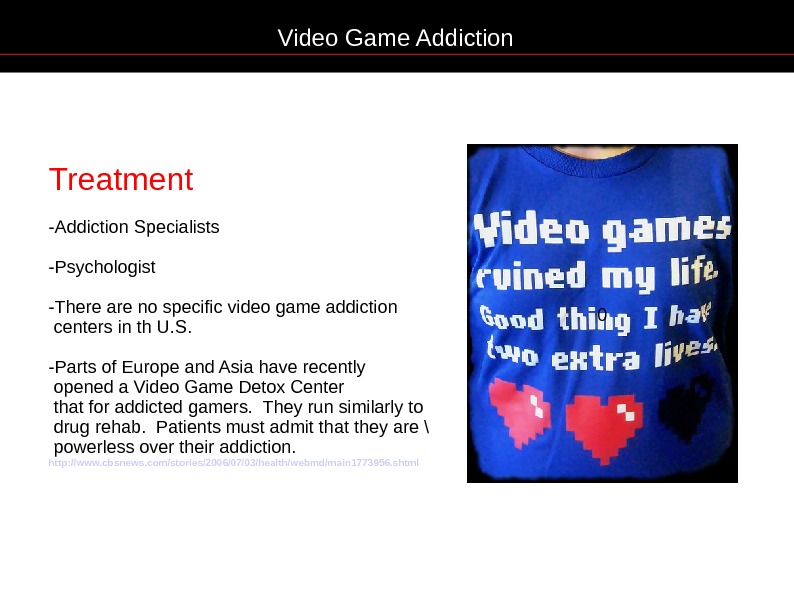 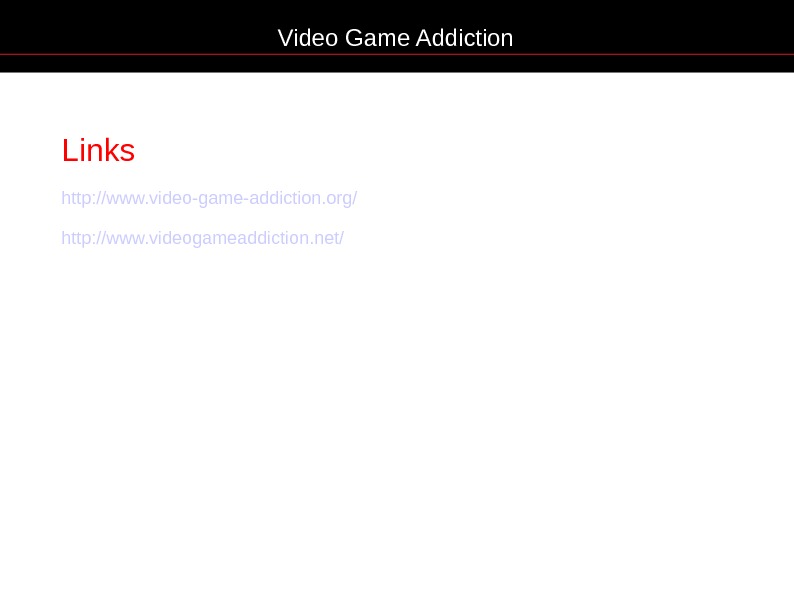 “ Facts” About Game Addiction -Not listed in the American Psychiatric Association’s Diagnostic and Statistical Manual of Mental Disorders, and the American Medical Association claims to be not ready to list games as an addiction because of a lack of scientific research. -The American Medical Association began research in 2007 to determine if game addiction is a mental disorder. The findings will not be formally published until 2012. http: //www. sciencedaily. com/releases/2007/06/070625133354. htm -Researchers have found evidence that video games do have addictive characteristics. An MRI study found that the part of the brain that generates rewarding feelings is activated during video-game play. Men are affected more than women. http: //med. stanford. edu/news_releases/2008/february/videobrain. html -Researchers at Hammersmith Hospital in London conducted a study in 2005 which found that dopamine levels in players’ brains doubled while they were playing. The findings of this study indicate that gaming could actually be chemically addictive. -Ballpark estimates by psychologists and non-scientific polls of the percentage of gamers who are addicts are between 8 -12%. -MMORPG’s are considered to be the most addictive games. Some medical professionals estimate that 40% of World of Warcraft gamers are addicted to it (this number seems high to me though). Video Game Addiction

Psychological Symptoms of Game Addiction -Lying about how much time you spend playing computer or video games -Playing computer or video games results in intense feelings of pleasure or guilt that seem uncontrollable -Spending more and more time playing video or computer games to get the same enjoyment -Withdrawing from friends, family, or your spouse to the point of disrupting family, social, or work life -Experiencing feelings of anger, depression, moodiness, anxiety, or restlessness when you’re not gaming -Spending significant sums of money for online services, computer upgrades, or gaming systems -Thinking obsessively about being on the computer or playing video games even when doing other things -Like those who abuse drugs or alcohol, video game addicts may experience: -A high or rush – caused by increased adrenaline -Changes in personality – Irritability and nervousness -Mood swings – Can include violent moods -Neurological damage – as dopamine levels increase dangerously Video Game Addiction

Video Game Addiction Deaths Related to Video Game Addiction China -A 30 -year-old man died from playing a game continuously for 3 days with no food or rest -A 15 -year-old boy committed suicide by jumping from a 24 story building. His suicide note was written through the eyes of a video game character. South Korea -A 28 -year-old man died from going into cardiac arrest after playing Star. Craft for 15 hours straight. Vietnam -A 13 -year-old boy murdered an 81 -year-old woman to steal money for a new video game. United States -24 -year-old man killed his 10 -month-old twin sons by leaving them in the bathtub for 30 minutes unattended while he played his gameboy. -27 -year-old man killed his 17 -month-old daughter in a fit of rage over his broken Xbox by repeatedly bashing her head. -A teenage boy shot his parents, killing his mother, for taking away his copy of Halo 3. Canada -15 -year-old boy ran away from home when his parents took away his xbox. His body was found several weeks later 3 miles from his home by hunters.

Video Game Addiction Treatment -Addiction Specialists -Psychologist -There are no specific video game addiction centers in th U. S. -Parts of Europe and Asia have recently opened a Video Game Detox Center that for addicted gamers. They run similarly to drug rehab. Patients must admit that they are \ powerless over their addiction. http: //www. cbsnews. com/stories/2006/07/03/health/webmd/main 1773956. shtml