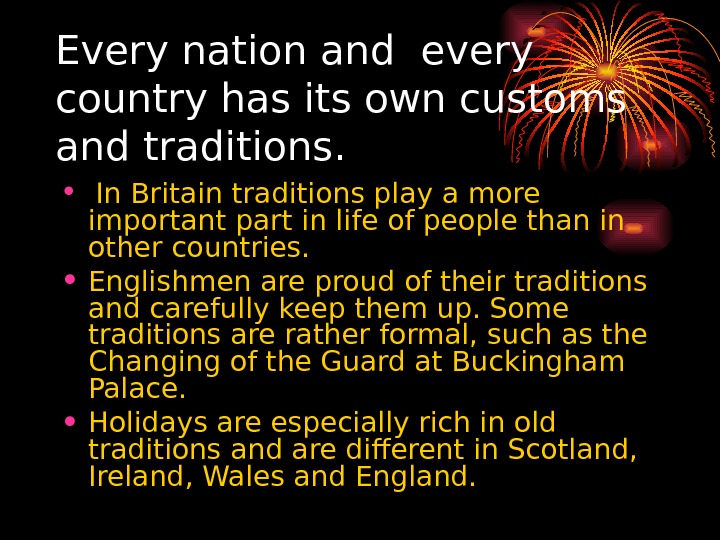 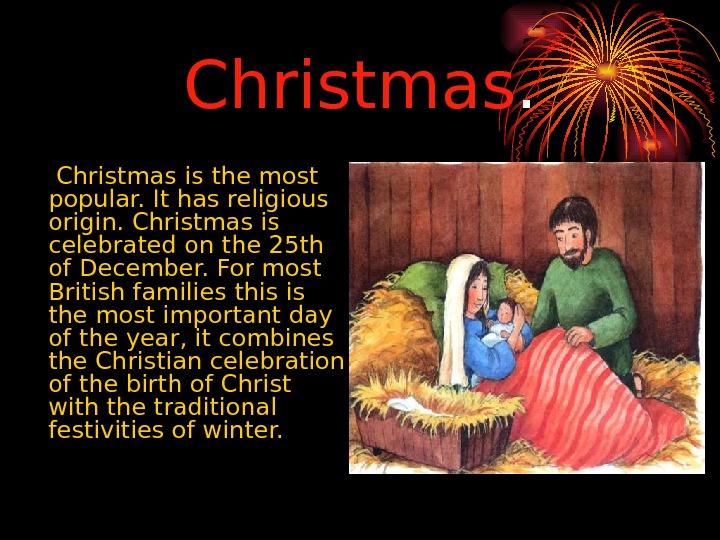 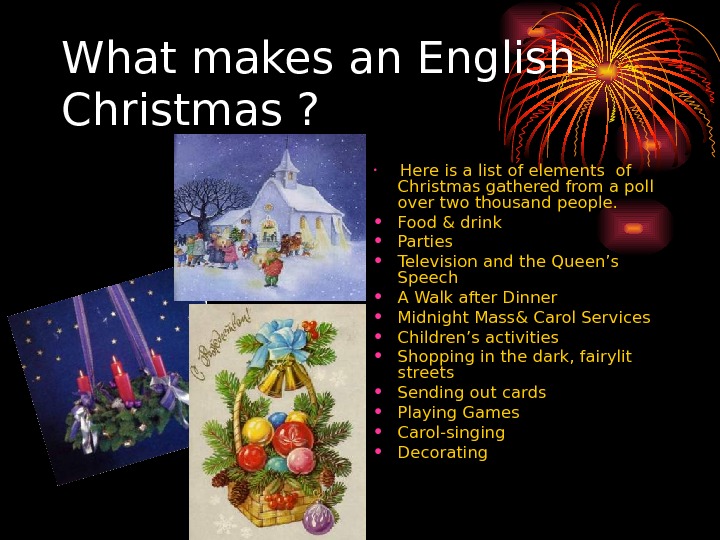 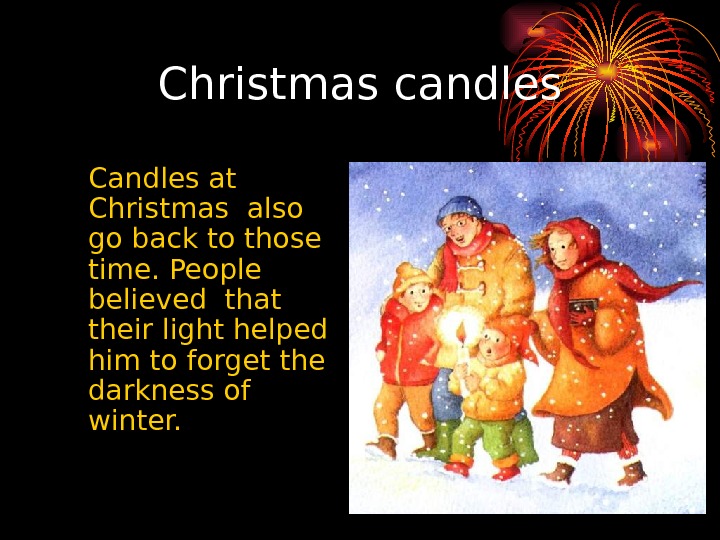 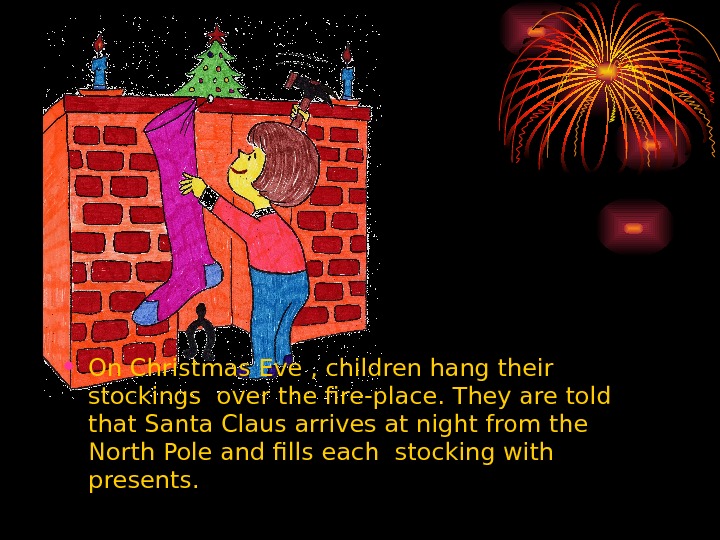 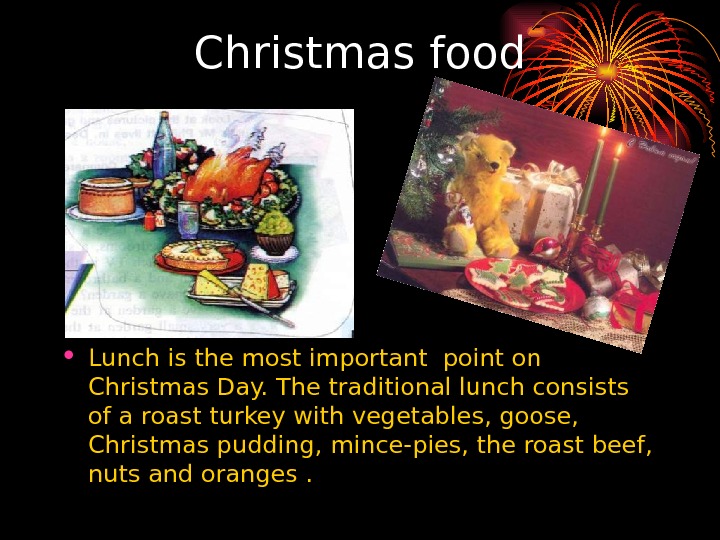 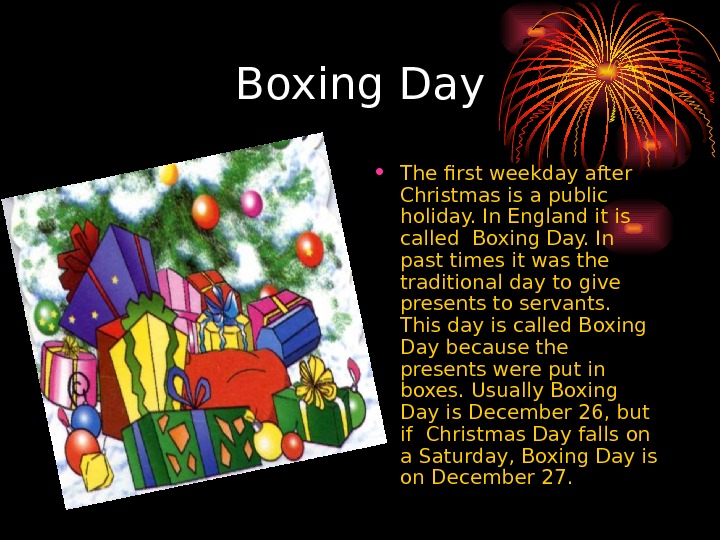 Traditions and customs Of Great Britain

Every nation and every country has its own customs and traditions. • In Britain traditions play a more important part in life of people than in other countries. • Englishmen are proud of their traditions and carefully keep them up. Some traditions are rather formal, such as the Changing of the Guard at Buckingham Palace. • Holidays are especially rich in old traditions and are different in Scotland, Ireland, Wales and England.

Christmas is the most popular. It has religious origin. Christmas is celebrated on the 25 th of December. For most British families this is the most important day of the year, it combines the Christian celebration of the birth of Christ with the traditional festivities of winter.

What makes an English Christmas ? • Here is a list of elements of Christmas gathered from a poll over two thousand people. • Food & drink • Parties • Television and the Queen’s Speech • A Walk after Dinner • Midnight Mass& Carol Services • Children’s activities • Shopping in the dark, fairylit streets • Sending out cards • Playing Games • Carol-singing • Decorating

Christmas tree Most families decorate their houses with brightly-coloured paper. They usually have a Christmas tree in the corner of the room. Early green trees were symbols of life.

Christmas candles Candles at Christmas also go back to those time. People believed that their light helped him to forget the darkness of winter.

• On Christmas Eve , children hang their stockings over the fire-place. They are told that Santa Claus arrives at night from the North Pole and fills each stocking with presents.

Christmas food • Lunch is the most important point on Christmas Day. The traditional lunch consists of a roast turkey with vegetables, goose, Christmas pudding, mince-pies, the roast beef, nuts and oranges .

Christmas card Not all Christmas traditions are old. The first Christmas card was made in 1842 by an English painter John Calcott Horsley who sent that card to one hundred of his friends.