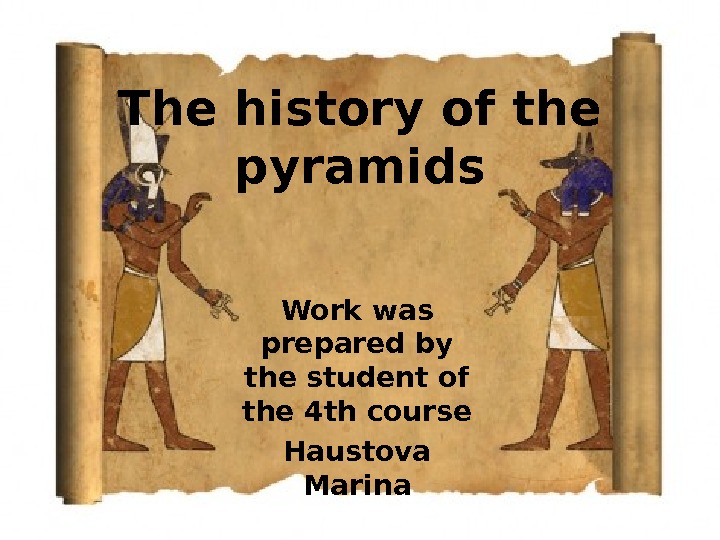 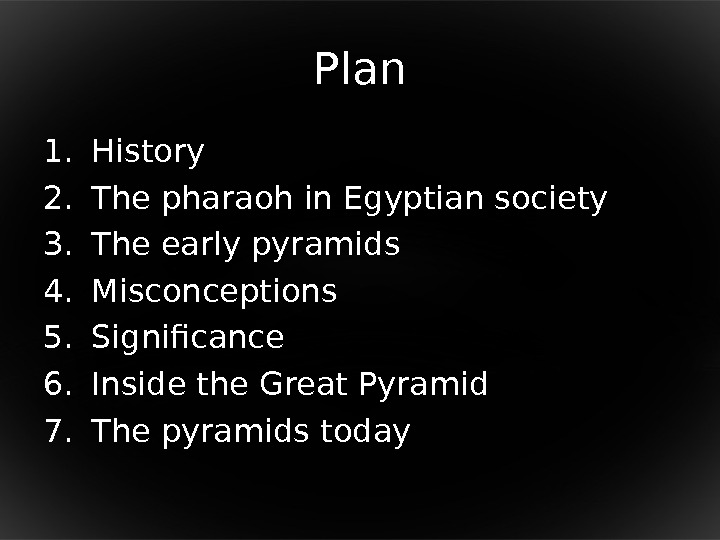 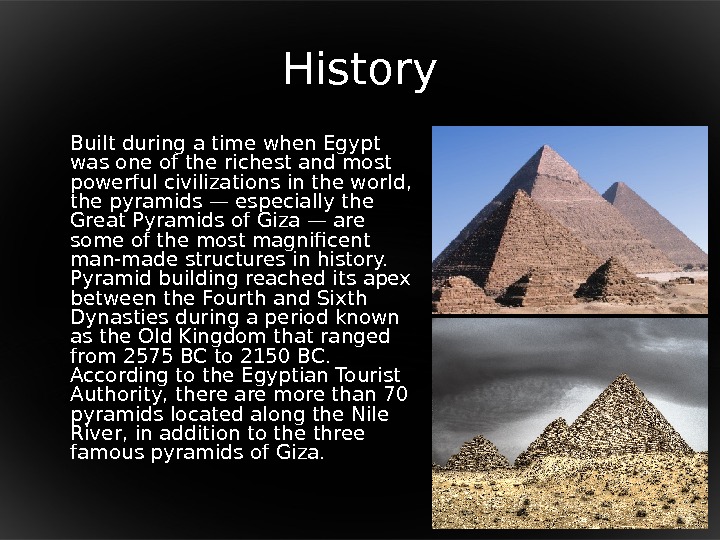 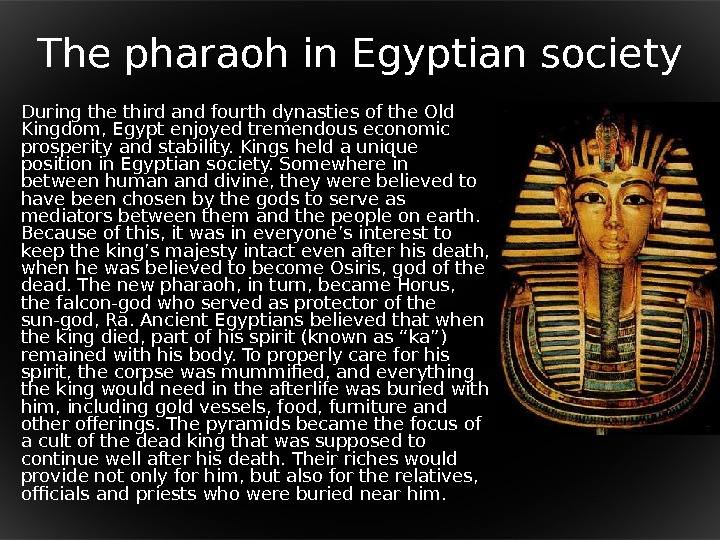 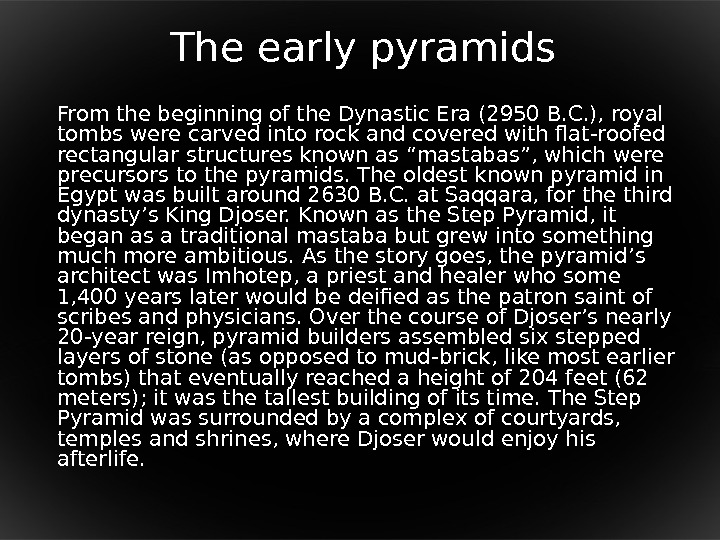 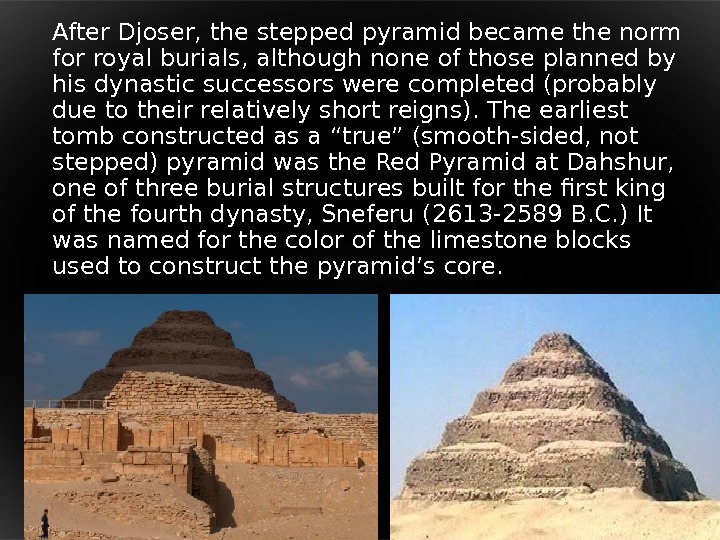 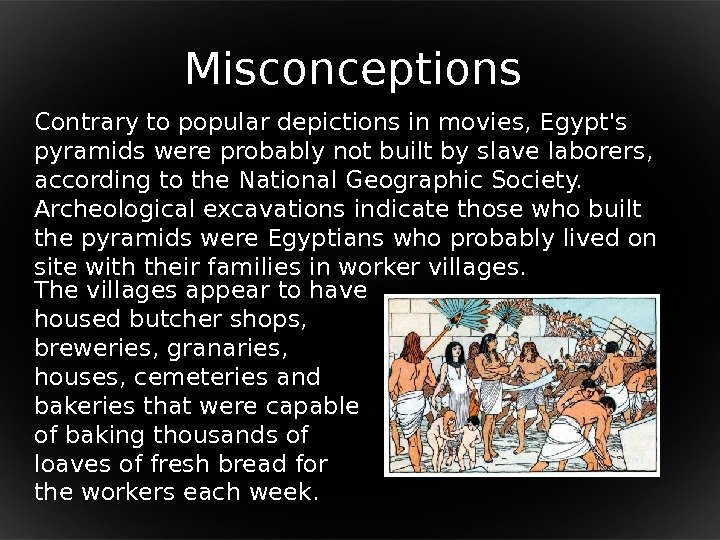 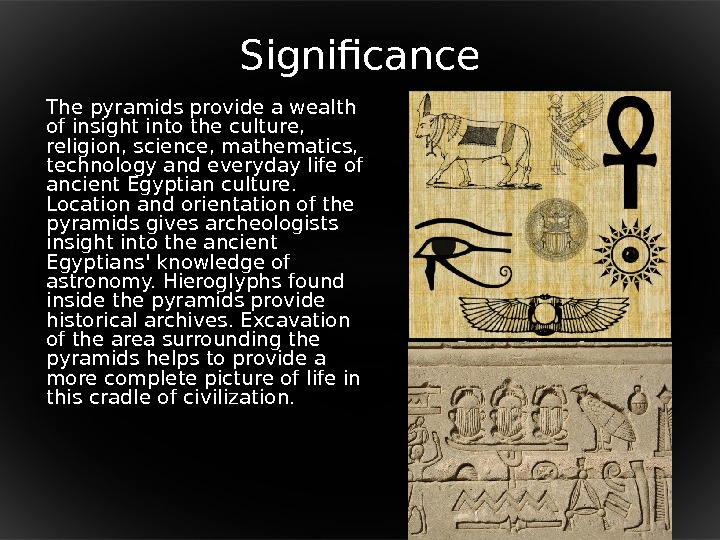 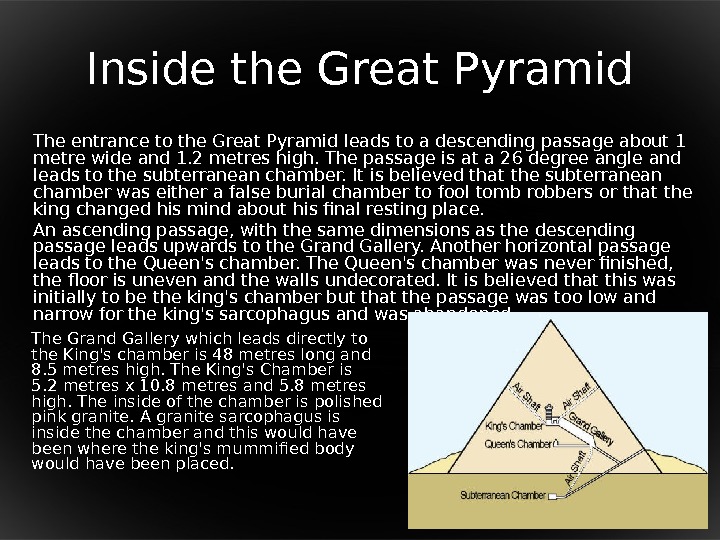 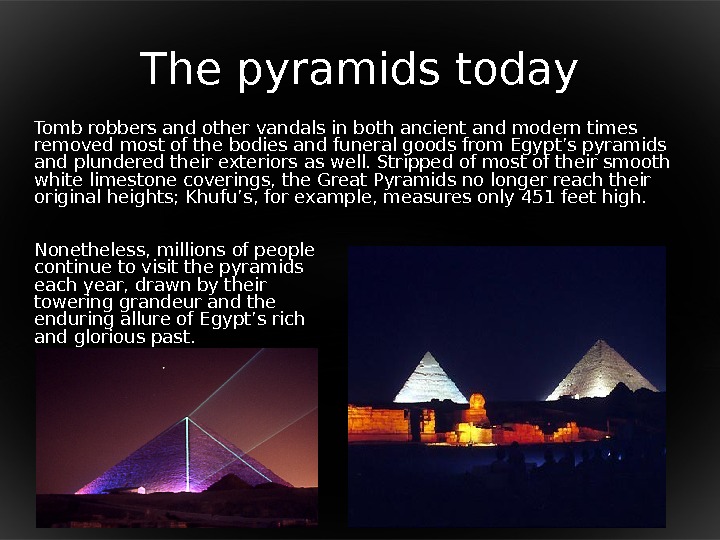 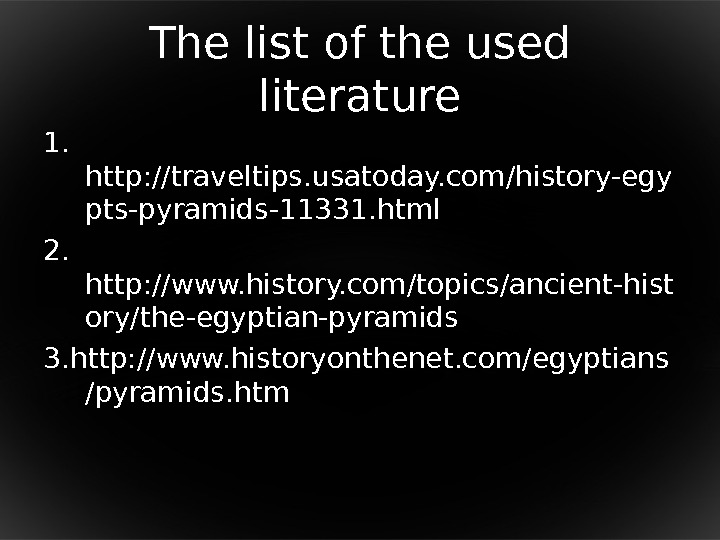 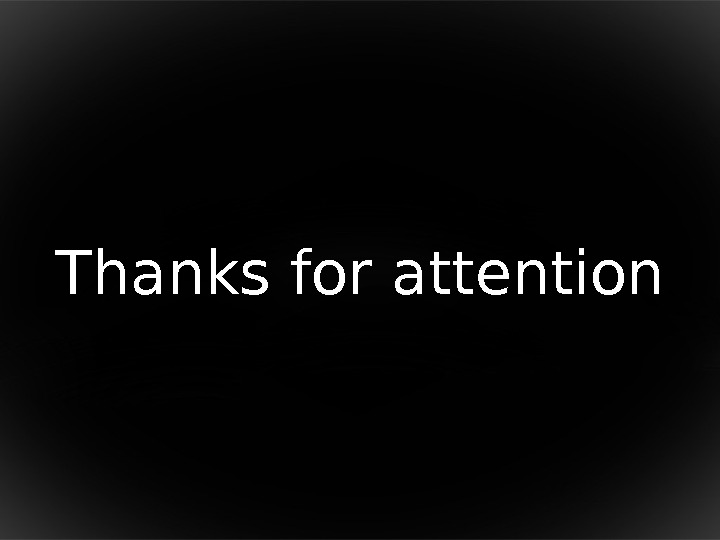 Скачать презентацию the history of the pyramids

Описание презентации Презентация the history of the pyramids по слайдам

History Built during a time when Egypt was one of the richest and most powerful civilizations in the world, the pyramids — especially the Great Pyramids of Giza — are some of the most magnificent man-made structures in history. Pyramid building reached its apex between the Fourth and Sixth Dynasties during a period known as the Old Kingdom that ranged from 2575 BC to 2150 BC. According to the Egyptian Tourist Authority, there are more than 70 pyramids located along the Nile River, in addition to the three famous pyramids of Giza.

T he pharaoh in Egyptian society During the third and fourth dynasties of the Old Kingdom, Egypt enjoyed tremendous economic prosperity and stability. Kings held a unique position in Egyptian society. Somewhere in between human and divine, they were believed to have been chosen by the gods to serve as mediators between them and the people on earth. Because of this, it was in everyone’s interest to keep the king’s majesty intact even after his death, when he was believed to become Osiris, god of the dead. The new pharaoh, in turn, became Horus, the falcon-god who served as protector of the sun-god, Ra. Ancient Egyptians believed that when the king died, part of his spirit (known as “ka”) remained with his body. To properly care for his spirit, the corpse was mummified, and everything the king would need in the afterlife was buried with him, including gold vessels, food, furniture and other offerings. The pyramids became the focus of a cult of the dead king that was supposed to continue well after his death. Their riches would provide not only for him, but also for the relatives, officials and priests who were buried near him.

The early pyramids From the beginning of the Dynastic Era (2950 B. C. ), royal tombs were carved into rock and covered with flat-roofed rectangular structures known as “mastabas”, which were precursors to the pyramids. The oldest known pyramid in Egypt was built around 2630 B. C. at Saqqara, for the third dynasty’s King Djoser. Known as the Step Pyramid, it began as a traditional mastaba but grew into something much more ambitious. As the story goes, the pyramid’s architect was Imhotep, a priest and healer who some 1, 400 years later would be deified as the patron saint of scribes and physicians. Over the course of Djoser’s nearly 20 -year reign, pyramid builders assembled six stepped layers of stone (as opposed to mud-brick, like most earlier tombs) that eventually reached a height of 204 feet (62 meters); it was the tallest building of its time. The Step Pyramid was surrounded by a complex of courtyards, temples and shrines, where Djoser would enjoy his afterlife.

After Djoser, the stepped pyramid became the norm for royal burials, although none of those planned by his dynastic successors were completed (probably due to their relatively short reigns). The earliest tomb constructed as a “true” (smooth-sided, not stepped) pyramid was the Red Pyramid at Dahshur, one of three burial structures built for the first king of the fourth dynasty, Sneferu (2613 -2589 B. C. ) It was named for the color of the limestone blocks used to construct the pyramid’s core.

M isconceptions Contrary to popular depictions in movies, Egypt’s pyramids were probably not built by slave laborers, according to the National Geographic Society. Archeological excavations indicate those who built the pyramids were Egyptians who probably lived on site with their families in worker villages. The villages appear to have housed butcher shops, breweries, granaries, houses, cemeteries and bakeries that were capable of baking thousands of loaves of fresh bread for the workers each week.

Inside the Great Pyramid The entrance to the Great Pyramid leads to a descending passage about 1 metre wide and 1. 2 metres high. The passage is at a 26 degree angle and leads to the subterranean chamber. It is believed that the subterranean chamber was either a false burial chamber to fool tomb robbers or that the king changed his mind about his final resting place. An ascending passage, with the same dimensions as the descending passage leads upwards to the Grand Gallery. Another horizontal passage leads to the Queen’s chamber. The Queen’s chamber was never finished, the floor is uneven and the walls undecorated. It is believed that this was initially to be the king’s chamber but that the passage was too low and narrow for the king’s sarcophagus and was abandoned. The Grand Gallery which leads directly to the King’s chamber is 48 metres long and 8. 5 metres high. The King’s Chamber is 5. 2 metres x 10. 8 metres and 5. 8 metres high. The inside of the chamber is polished pink granite. A granite sarcophagus is inside the chamber and this would have been where the king’s mummified body would have been placed.

The pyramids today Tomb robbers and other vandals in both ancient and modern times removed most of the bodies and funeral goods from Egypt’s pyramids and plundered their exteriors as well. Stripped of most of their smooth white limestone coverings, the Great Pyramids no longer reach their original heights; Khufu’s, for example, measures only 451 feet high. Nonetheless, millions of people continue to visit the pyramids each year, drawn by their towering grandeur and the enduring allure of Egypt’s rich and glorious past.