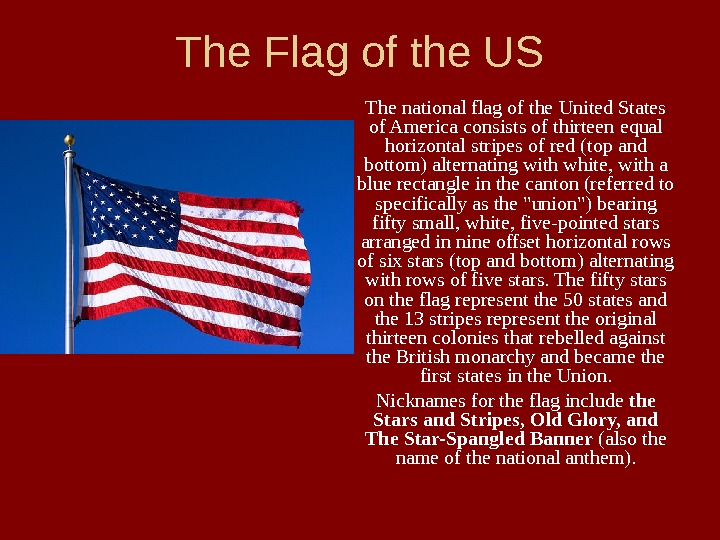 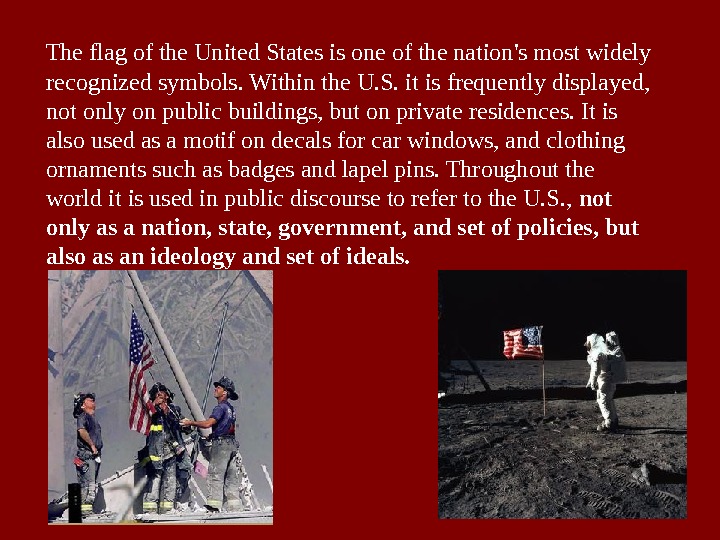 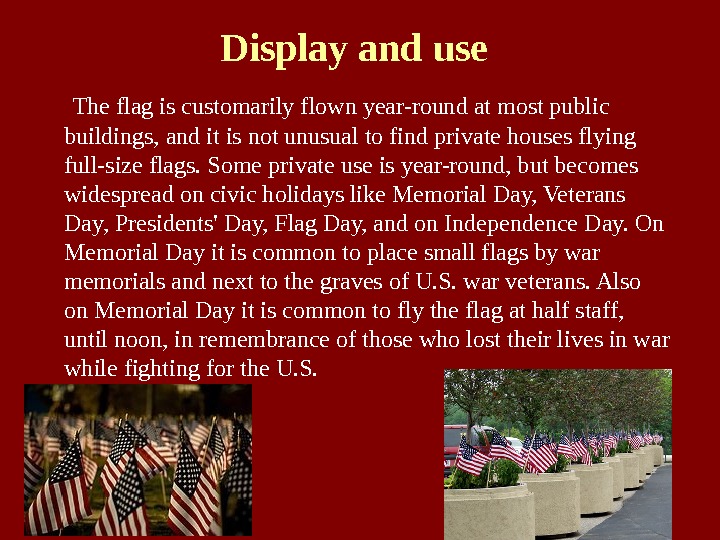 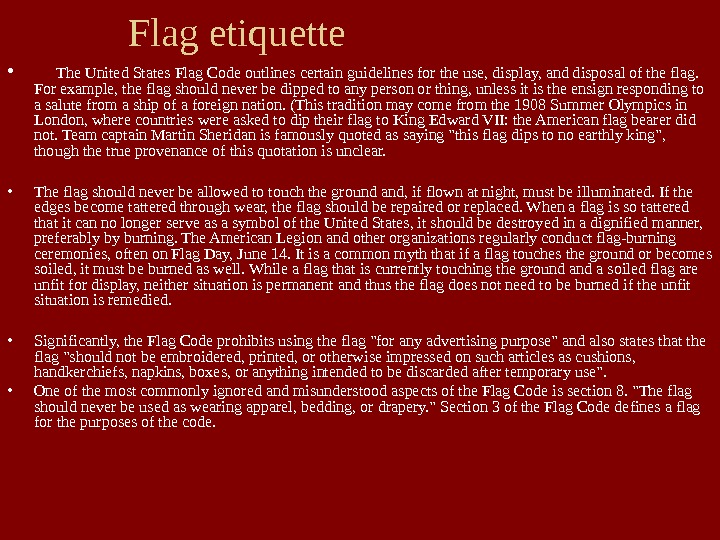 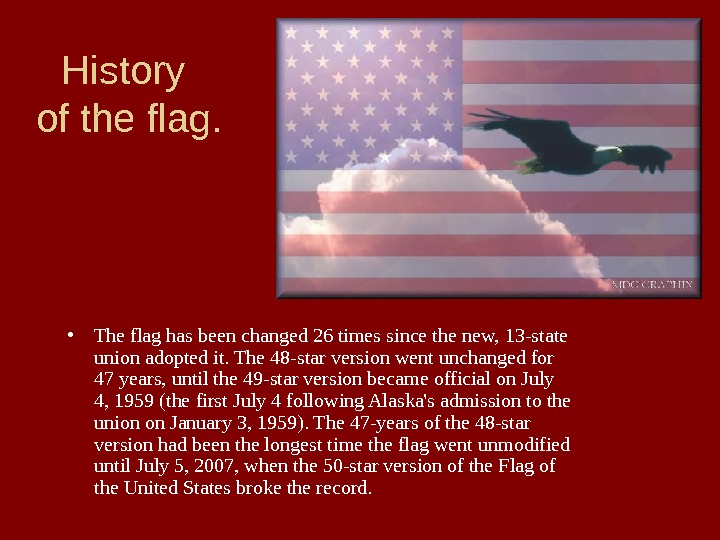 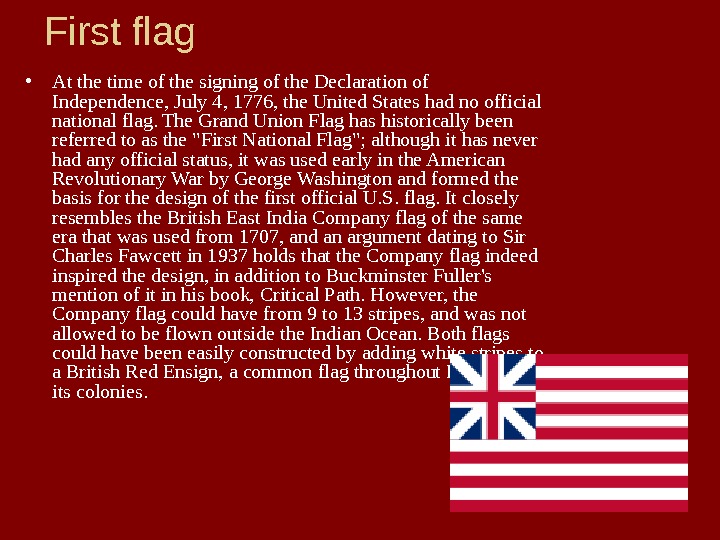 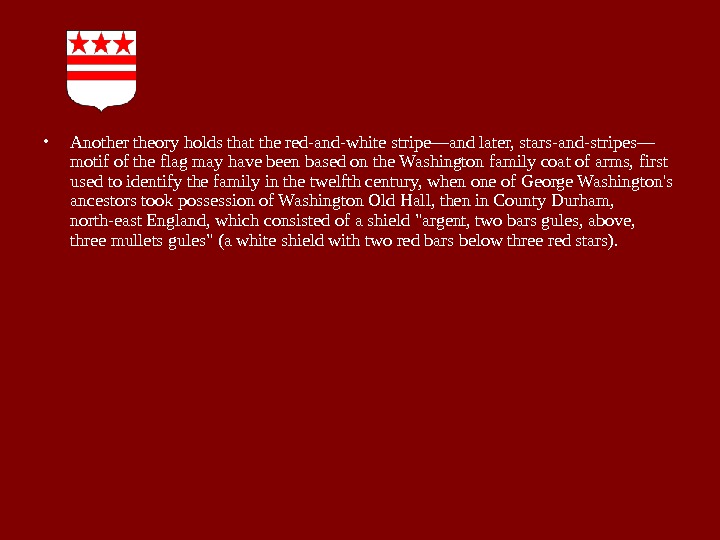 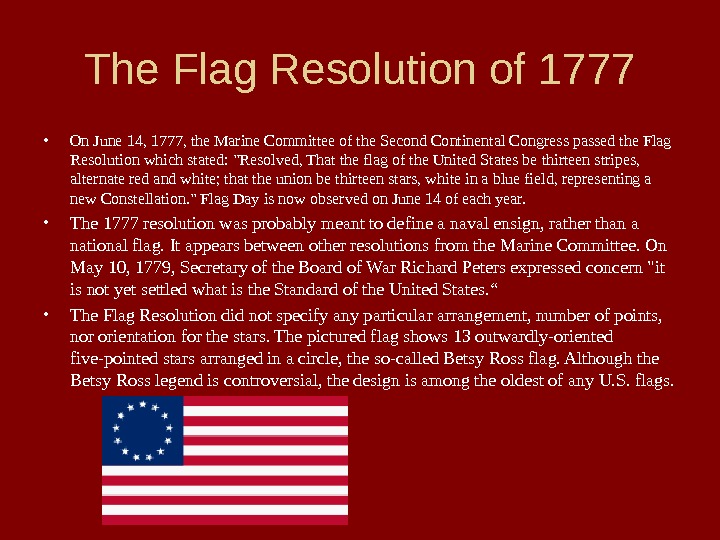 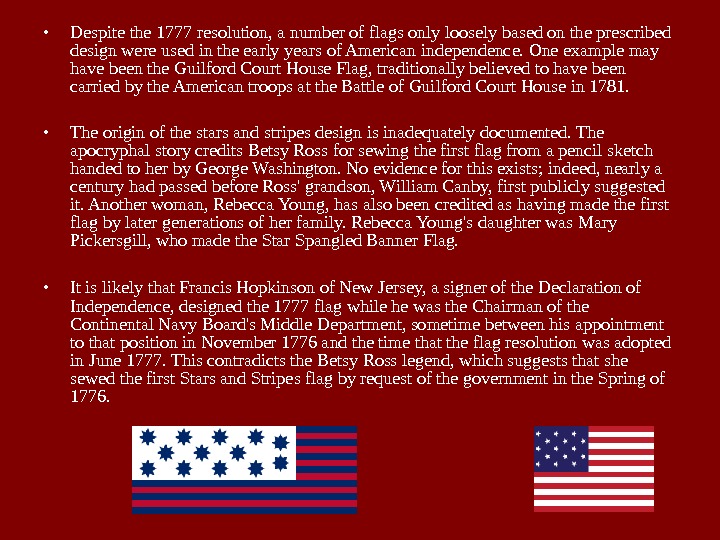 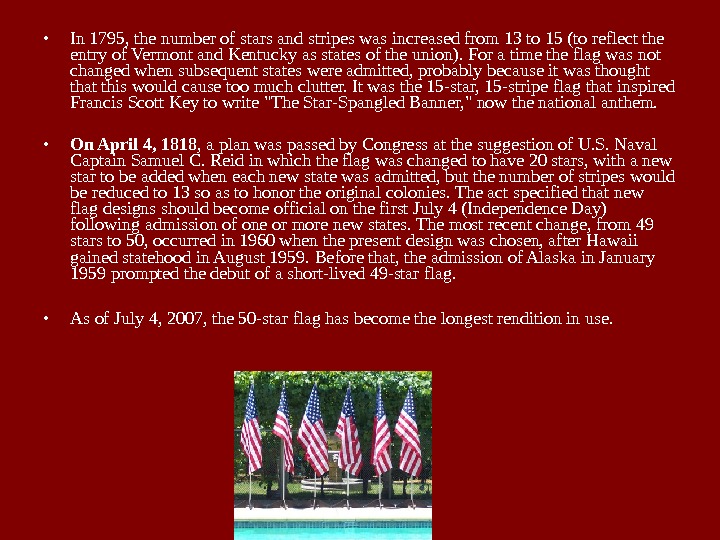 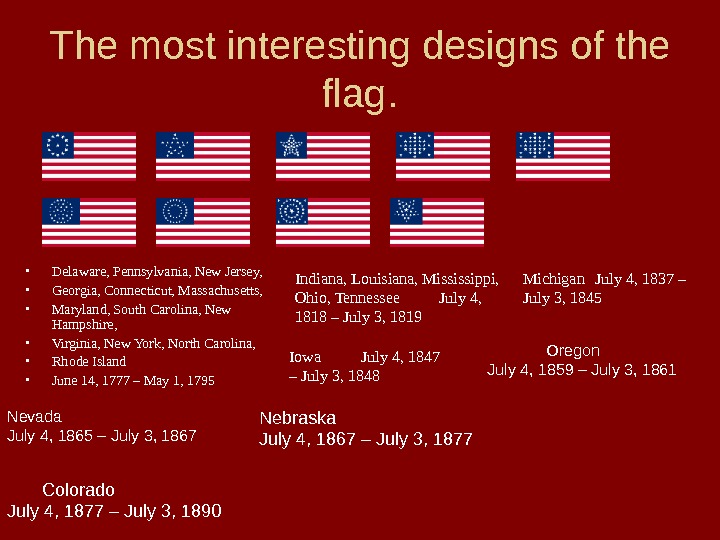 Скачать презентацию the flag of the us

Описание презентации Презентация the flag of the us по слайдам

The Flag of the US The national flag of the United States of America consists of thirteen equal horizontal stripes of red (top and bottom) alternating with white, with a blue rectangle in the canton (referred to specifically as the «union») bearing fifty small, white, five-pointed stars arranged in nine offset horizontal rows of six stars (top and bottom) alternating with rows of five stars. The fifty stars on the flag represent the 50 states and the 13 stripes represent the original thirteen colonies that rebelled against the British monarchy and became the first states in the Union. Nicknames for the flag include the Stars and Stripes, Old Glory, and The Star-Spangled Banner (also the name of the national anthem).

The flag of the United States is one of the nation’s most widely recognized symbols. Within the U. S. it is frequently displayed, not only on public buildings, but on private residences. It is also used as a motif on decals for car windows, and clothing ornaments such as badges and lapel pins. Throughout the world it is used in public discourse to refer to the U. S. , not only as a nation, state, government, and set of policies, but also as an ideology and set of ideals.

Display and use The flag is customarily flown year-round at most public buildings, and it is not unusual to find private houses flying full-size flags. Some private use is year-round, but becomes widespread on civic holidays like Memorial Day, Veterans Day, Presidents’ Day, Flag Day, and on Independence Day. On Memorial Day it is common to place small flags by war memorials and next to the graves of U. S. war veterans. Also on Memorial Day it is common to fly the flag at half staff, until noon, in remembrance of those who lost their lives in war while fighting for the U. S.

Flag etiquette • The United States Flag Code outlines certain guidelines for the use, display, and disposal of the flag. For example, the flag should never be dipped to any person or thing, unless it is the ensign responding to a salute from a ship of a foreign nation. (This tradition may come from the 1908 Summer Olympics in London, where countries were asked to dip their flag to King Edward VII: the American flag bearer did not. Team captain Martin Sheridan is famously quoted as saying «this flag dips to no earthly king», though the true provenance of this quotation is unclear. • The flag should never be allowed to touch the ground and, if flown at night, must be illuminated. If the edges become tattered through wear, the flag should be repaired or replaced. When a flag is so tattered that it can no longer serve as a symbol of the United States, it should be destroyed in a dignified manner, preferably by burning. The American Legion and other organizations regularly conduct flag-burning ceremonies, often on Flag Day, June 14. It is a common myth that if a flag touches the ground or becomes soiled, it must be burned as well. While a flag that is currently touching the ground a soiled flag are unfit for display, neither situation is permanent and thus the flag does not need to be burned if the unfit situation is remedied. • Significantly, the Flag Code prohibits using the flag «for any advertising purpose» and also states that the flag «should not be embroidered, printed, or otherwise impressed on such articles as cushions, handkerchiefs, napkins, boxes, or anything intended to be discarded after temporary use». • One of the most commonly ignored and misunderstood aspects of the Flag Code is section 8. «The flag should never be used as wearing apparel, bedding, or drapery. » Section 3 of the Flag Code defines a flag for the purposes of the code.

History of the flag. • The flag has been changed 26 times since the new, 13 -state union adopted it. The 48 -star version went unchanged for 47 years, until the 49 -star version became official on July 4, 1959 (the first July 4 following Alaska’s admission to the union on January 3, 1959). The 47 -years of the 48 -star version had been the longest time the flag went unmodified until July 5, 2007, when the 50 -star version of the Flag of the United States broke the record.

First flag • At the time of the signing of the Declaration of Independence, July 4, 1776, the United States had no official national flag. The Grand Union Flag has historically been referred to as the «First National Flag»; although it has never had any official status, it was used early in the American Revolutionary War by George Washington and formed the basis for the design of the first official U. S. flag. It closely resembles the British East India Company flag of the same era that was used from 1707, and an argument dating to Sir Charles Fawcett in 1937 holds that the Company flag indeed inspired the design, in addition to Buckminster Fuller’s mention of it in his book, Critical Path. However, the Company flag could have from 9 to 13 stripes, and was not allowed to be flown outside the Indian Ocean. Both flags could have been easily constructed by adding white stripes to a British Red Ensign, a common flag throughout Britain and its colonies.

• Another theory holds that the red-and-white stripe—and later, stars-and-stripes— motif of the flag may have been based on the Washington family coat of arms, first used to identify the family in the twelfth century, when one of George Washington’s ancestors took possession of Washington Old Hall, then in County Durham, north-east England, which consisted of a shield «argent, two bars gules, above, three mullets gules» (a white shield with two red bars below three red stars).

The Flag Resolution of 1777 • On June 14, 1777, the Marine Committee of the Second Continental Congress passed the Flag Resolution which stated: «Resolved, That the flag of the United States be thirteen stripes, alternate red and white; that the union be thirteen stars, white in a blue field, representing a new Constellation. » Flag Day is now observed on June 14 of each year. • The 1777 resolution was probably meant to define a naval ensign, rather than a national flag. It appears between other resolutions from the Marine Committee. On May 10, 1779, Secretary of the Board of War Richard Peters expressed concern «it is not yet settled what is the Standard of the United States. “ • The Flag Resolution did not specify any particular arrangement, number of points, nor orientation for the stars. The pictured flag shows 13 outwardly-oriented five-pointed stars arranged in a circle, the so-called Betsy Ross flag. Although the Betsy Ross legend is controversial, the design is among the oldest of any U. S. flags.

• Despite the 1777 resolution, a number of flags only loosely based on the prescribed design were used in the early years of American independence. One example may have been the Guilford Court House Flag, traditionally believed to have been carried by the American troops at the Battle of Guilford Court House in 1781. • The origin of the stars and stripes design is inadequately documented. The apocryphal story credits Betsy Ross for sewing the first flag from a pencil sketch handed to her by George Washington. No evidence for this exists; indeed, nearly a century had passed before Ross’ grandson, William Canby, first publicly suggested it. Another woman, Rebecca Young, has also been credited as having made the first flag by later generations of her family. Rebecca Young’s daughter was Mary Pickersgill, who made the Star Spangled Banner Flag. • It is likely that Francis Hopkinson of New Jersey, a signer of the Declaration of Independence, designed the 1777 flag while he was the Chairman of the Continental Navy Board’s Middle Department, sometime between his appointment to that position in November 1776 and the time that the flag resolution was adopted in June 1777. This contradicts the Betsy Ross legend, which suggests that she sewed the first Stars and Stripes flag by request of the government in the Spring of 1776.

• In 1795, the number of stars and stripes was increased from 13 to 15 (to reflect the entry of Vermont and Kentucky as states of the union). For a time the flag was not changed when subsequent states were admitted, probably because it was thought that this would cause too much clutter. It was the 15 -star, 15 -stripe flag that inspired Francis Scott Key to write «The Star-Spangled Banner, » now the national anthem. • On April 4, 1818 , a plan was passed by Congress at the suggestion of U. S. Naval Captain Samuel C. Reid in which the flag was changed to have 20 stars, with a new star to be added when each new state was admitted, but the number of stripes would be reduced to 13 so as to honor the original colonies. The act specified that new flag designs should become official on the first July 4 (Independence Day) following admission of one or more new states. The most recent change, from 49 stars to 50, occurred in 1960 when the present design was chosen, after Hawaii gained statehood in August 1959. Before that, the admission of Alaska in January 1959 prompted the debut of a short-lived 49 -star flag. • As of July 4, 2007, the 50 -star flag has become the longest rendition in use.