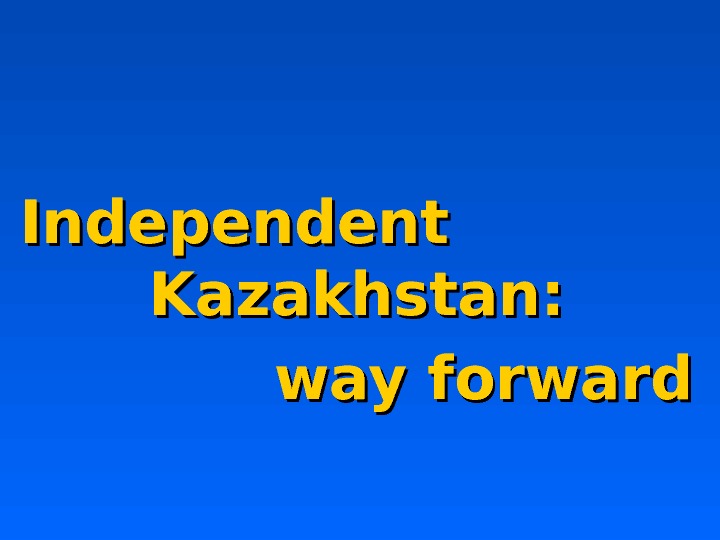 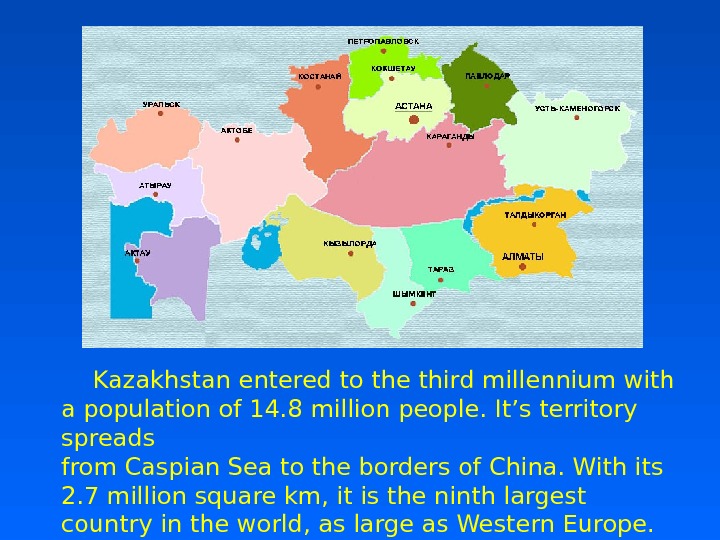 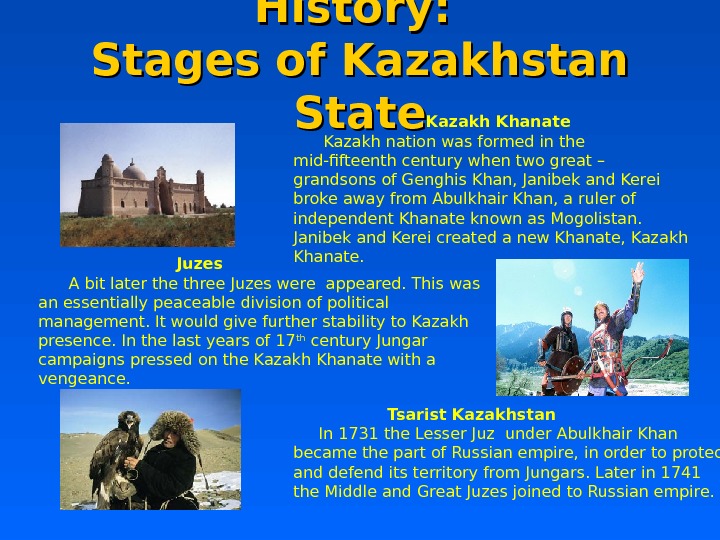 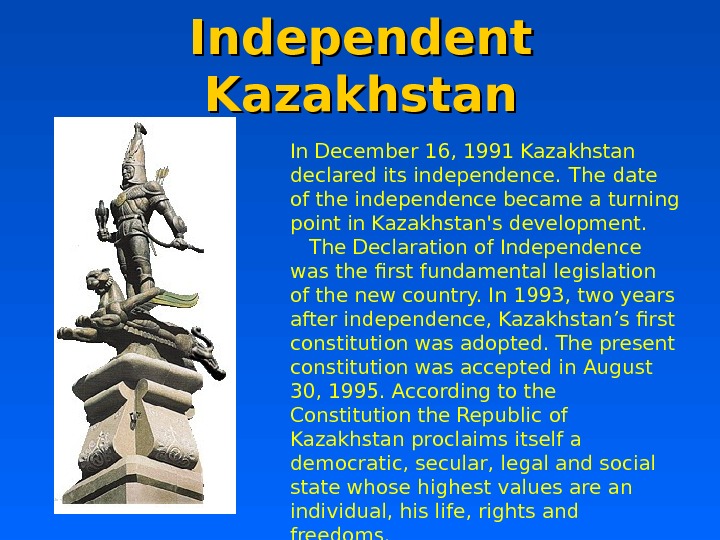 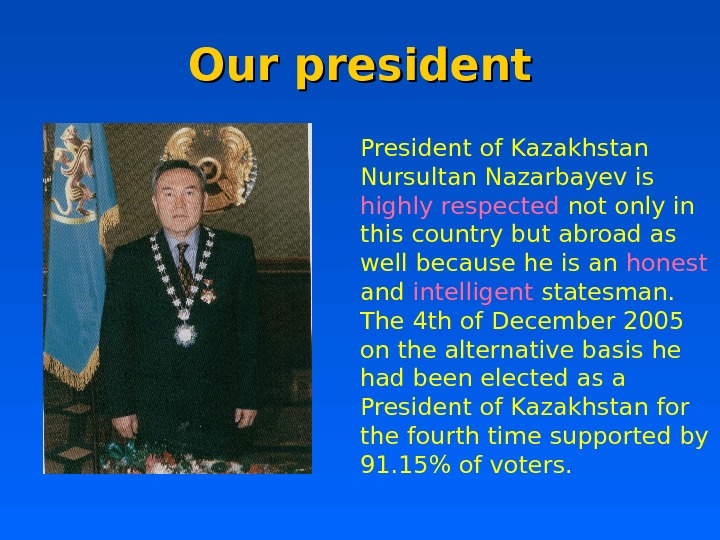 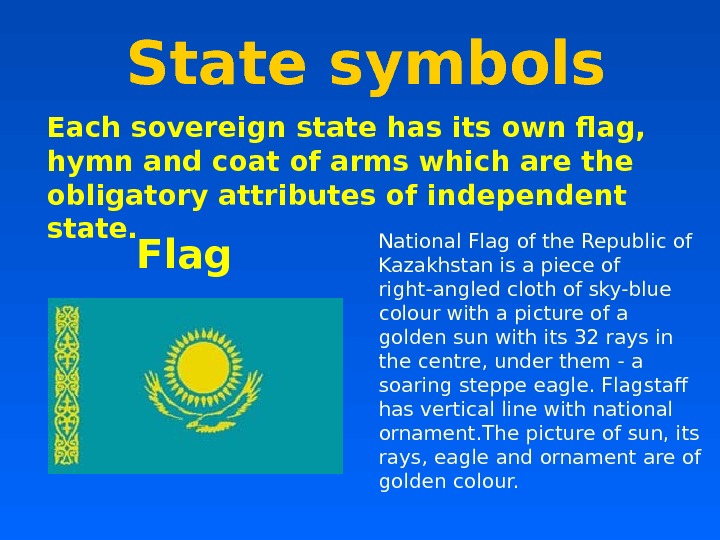 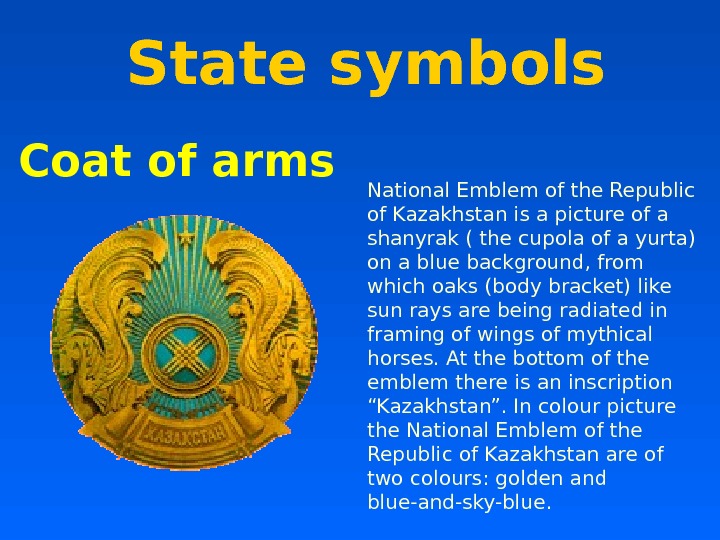 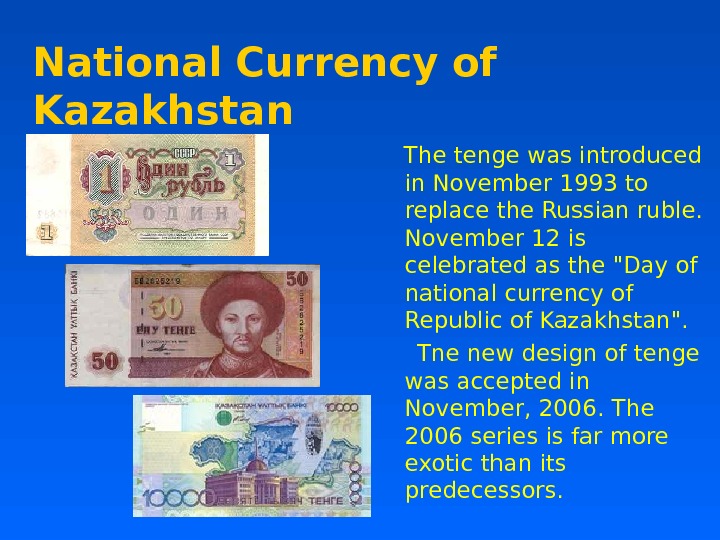 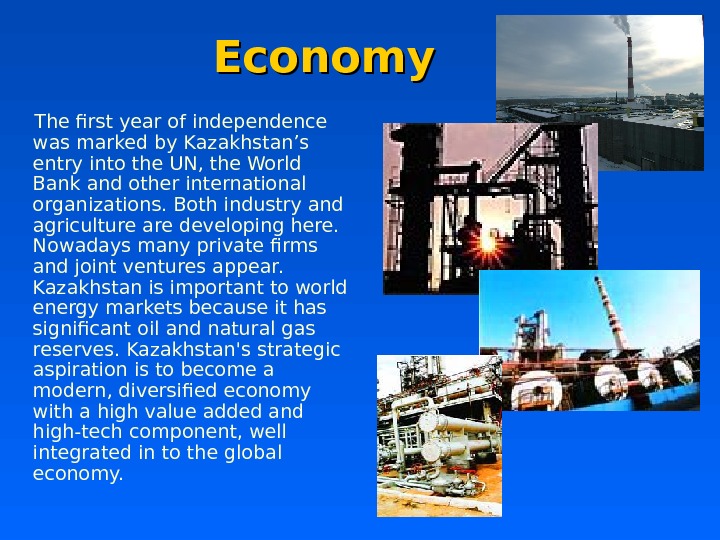 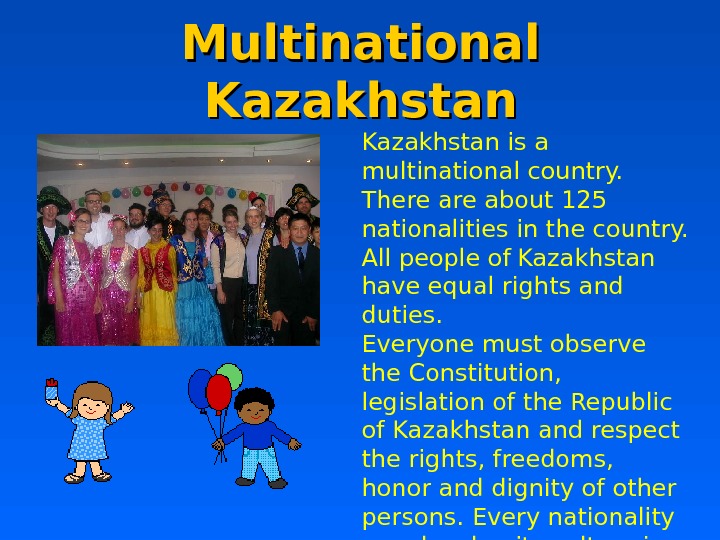 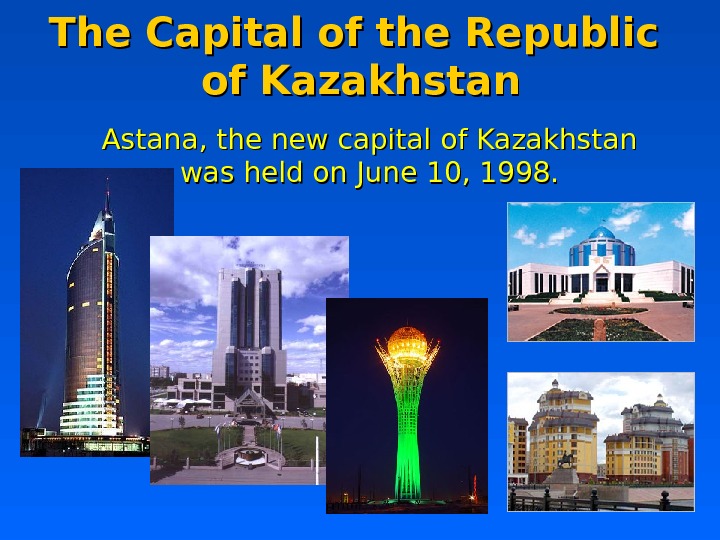 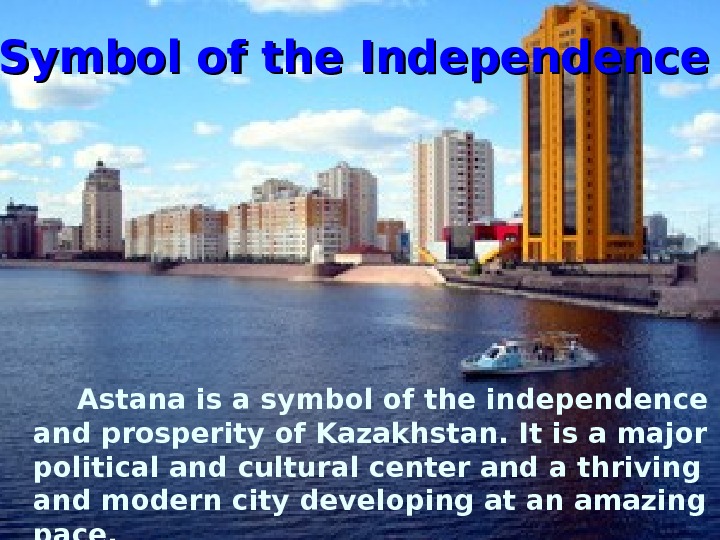 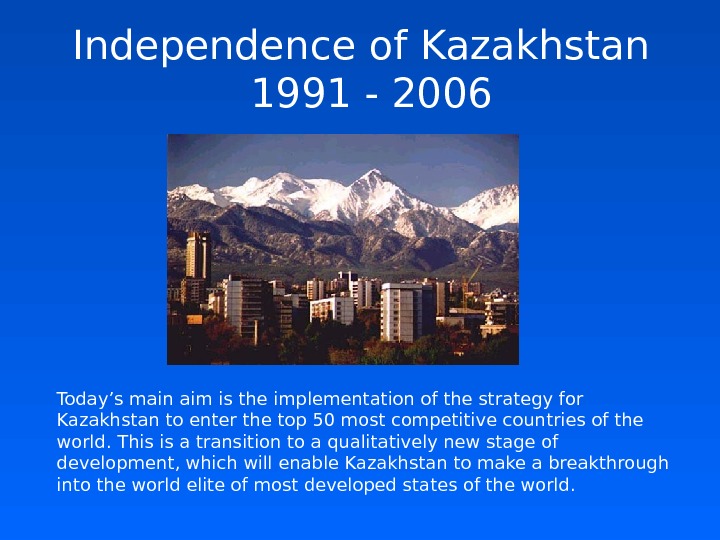 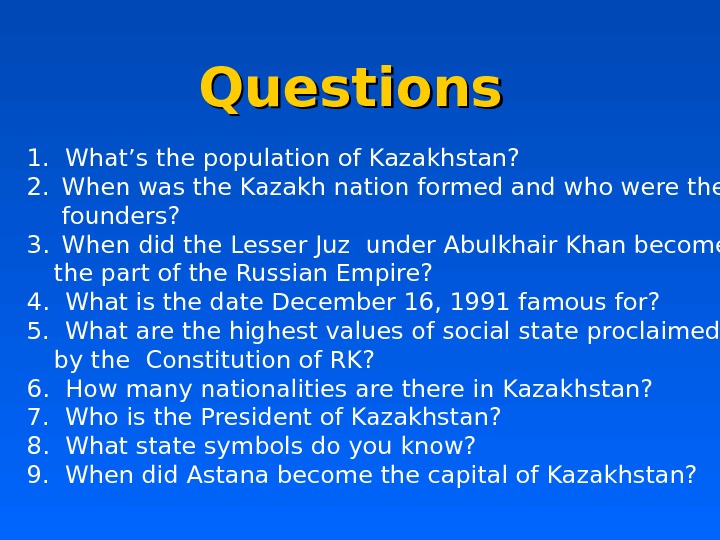 Kazakhstan entered to the third millennium with a population of 14. 8 million people. It’s territory spreads from Caspian Sea to the borders of China. With its 2. 7 million square km, it is the ninth largest country in the world, as large as Western Europe.

History: Stages of Kazakhstan State Kazakh Khanate Kazakh nation was formed in the mid-fifteenth century when two great – grandsons of Genghis Khan, Janibek and Kerei broke away from Abulkhair Khan, a ruler of independent Khanate known as Mogolistan. Janibek and Kerei created a new Khanate, Kazakh Khanate. Juzes A bit later the three Juzes were appeared. This was an essentially peaceable division of political management. It would give further stability to Kazakh presence. In the last years of 17 th century Jungar campaigns pressed on the Kazakh Khanate with a vengeance. Tsarist Kazakhstan In 1731 the Lesser Juz under Abulkhair Khan became the part of Russian empire, in order to protect and defend its territory from Jungars. Later in 1741 the Middle and Great Juzes joined to Russian empire.

State symbols Flag. Each sovereign state has its own flag, hymn and coat of arms which are the obligatory attributes of independent state. National Flag of the Republic of Kazakhstan is a piece of right-angled cloth of sky-blue colour with a picture of a golden sun with its 32 rays in the centre, under them — a soaring steppe eagle. Flagstaff has vertical line with national ornament. The picture of sun, its rays, eagle and ornament are of golden colour.

State symbols Coat of arms National Emblem of the Republic of Kazakhstan is a picture of a shanyrak ( the cupola of a yurta) on a blue background, from which oaks (body bracket) like sun rays are being radiated in framing of wings of mythical horses. At the bottom of the emblem there is an inscription “Kazakhstan”. In colour picture the National Emblem of the Republic of Kazakhstan are of two colours: golden and blue-and-sky-blue.

Economy The first year of independence was marked by Kazakhstan’s entry into the UN, the World Bank and other international organizations. Both industry and agriculture are developing here. Nowadays many private firms and joint ventures appear. Kazakhstan is important to world energy markets because it has significant oil and natural gas reserves. Kazakhstan’s strategic aspiration is to become a modern, diversified economy with a high value added and high-tech component, well integrated in to the global economy.

Multinational Kazakhstan is a multinational country. There about 125 nationalities in the country. All people of Kazakhstan have equal rights and duties. Everyone must observe the Constitution, legislation of the Republic of Kazakhstan and respect the rights, freedoms, honor and dignity of other persons. Every nationality can develop its culture in Kazakhstan.

Symbol of the Independence Astana is a symbol of the independence and prosperity of Kazakhstan. It is a major political and cultural center and a thriving and modern city developing at an amazing pace.

Today’s main aim is the implementation of the strategy for Kazakhstan to enter the top 50 most competitive countries of the world. This is a transition to a qualitatively new stage of development, which will enable Kazakhstan to make a breakthrough into the world elite of most developed states of the world. Independence of Kazakhstan 1991 —

Questions 1. What’s the population of Kazakhstan? 2. When was the Kazakh nation formed and who were the founders? 3. When did the Lesser Juz under Abulkhair Khan become the part of the Russian Empire? 4. What is the date December 16, 1991 famous for? 5. What are the highest values of social state proclaimed by the Constitution of RK? 6. How many nationalities are there in Kazakhstan? 7. Who is the President of Kazakhstan? 8. What state symbols do you know? 9. When did Astana become the capital of Kazakhstan?