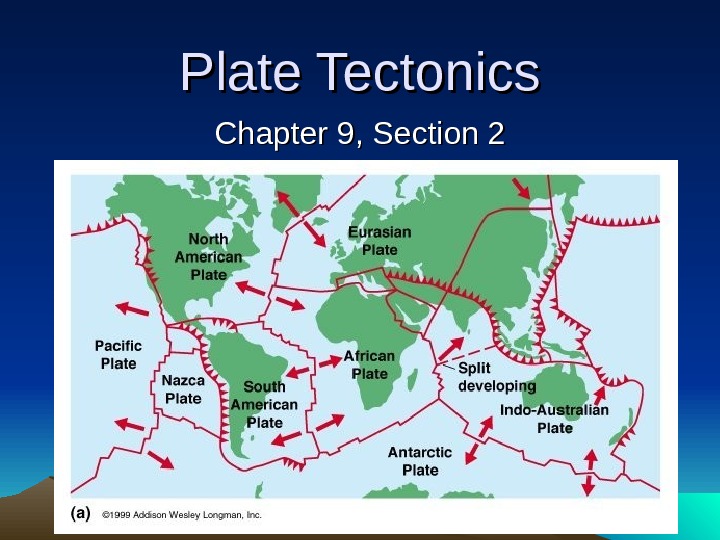 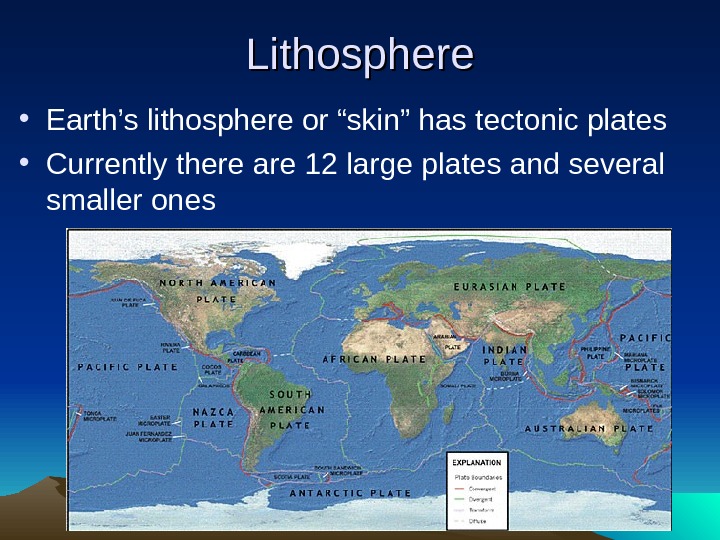 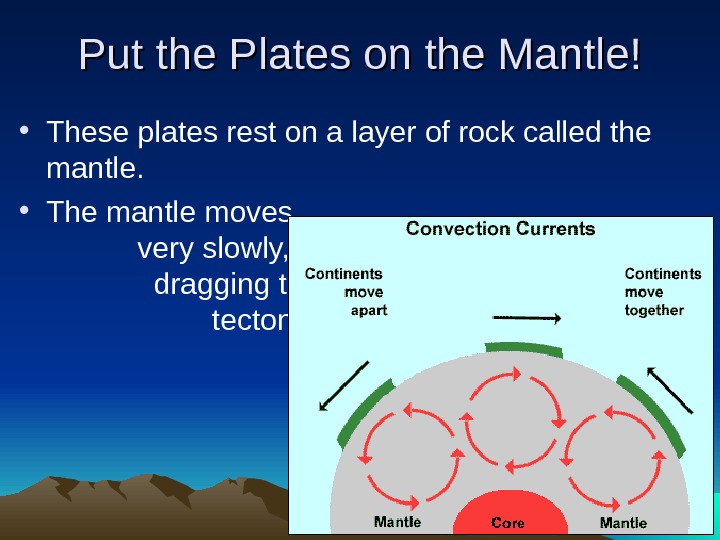 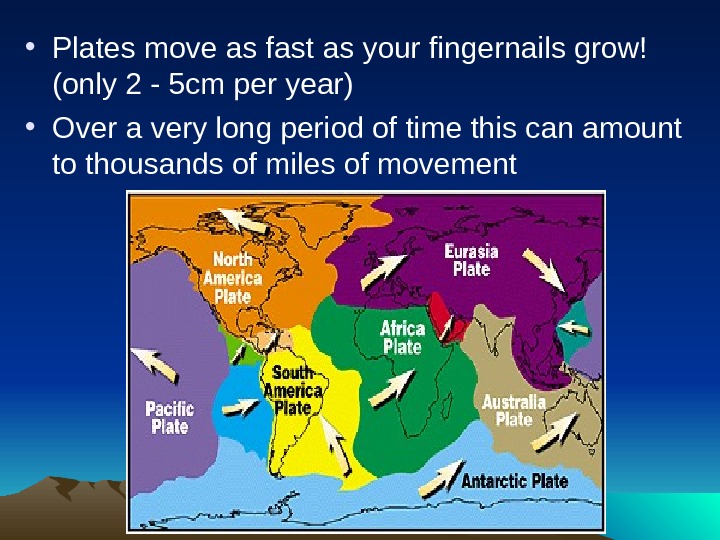 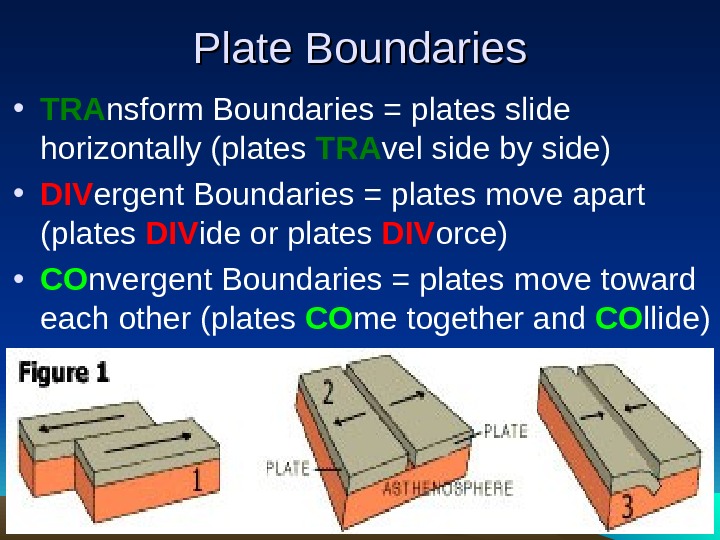 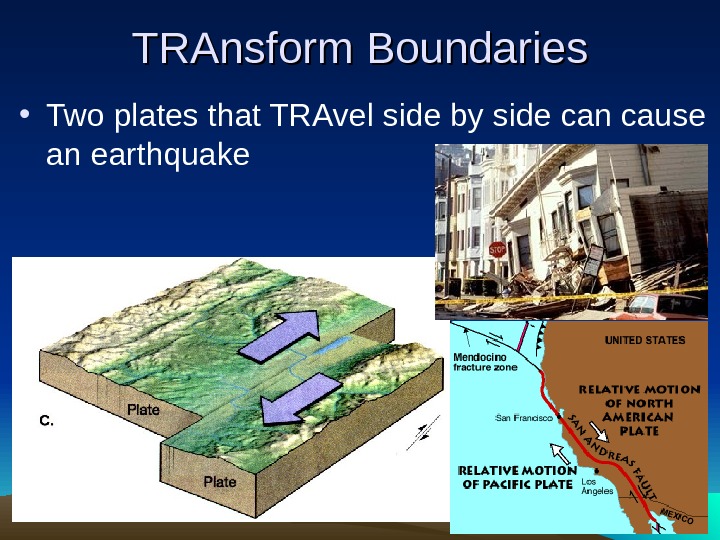 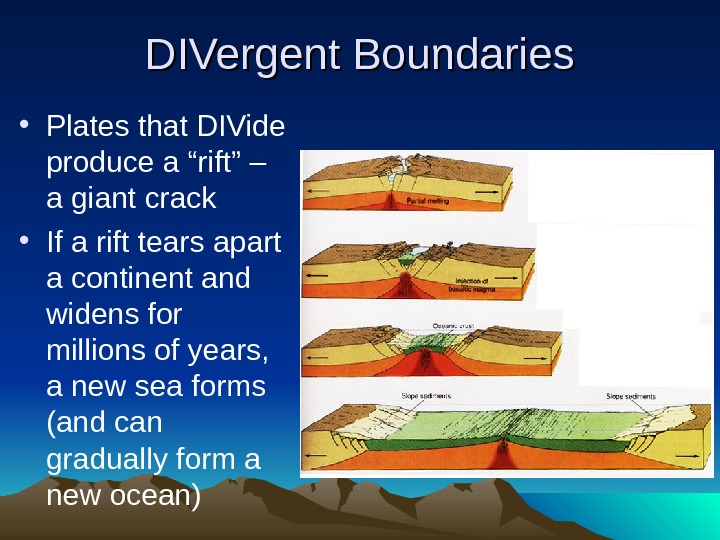 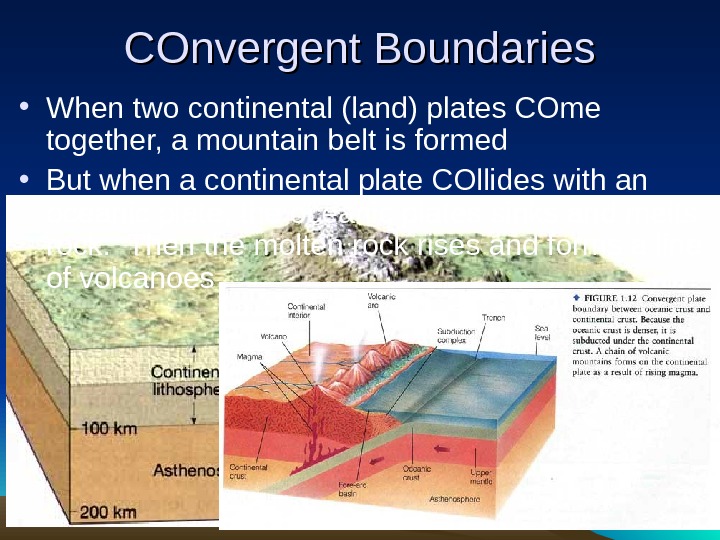 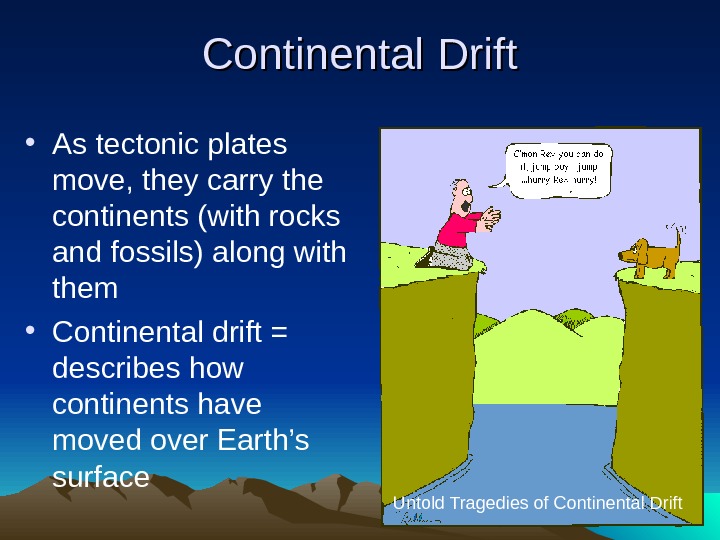 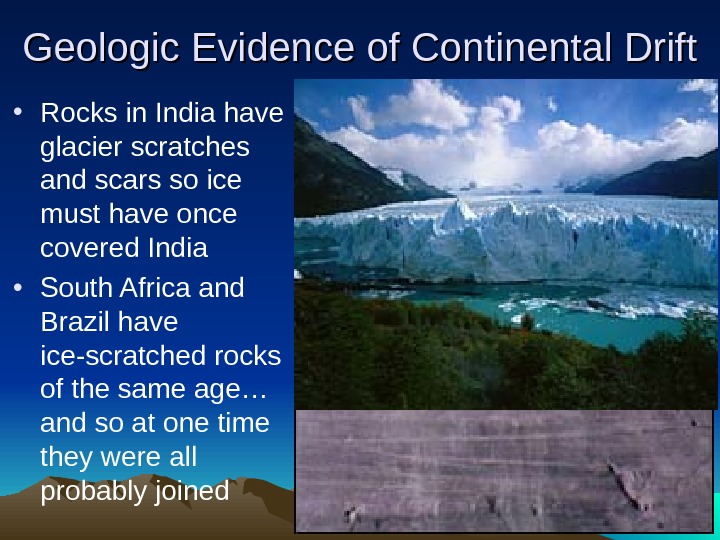 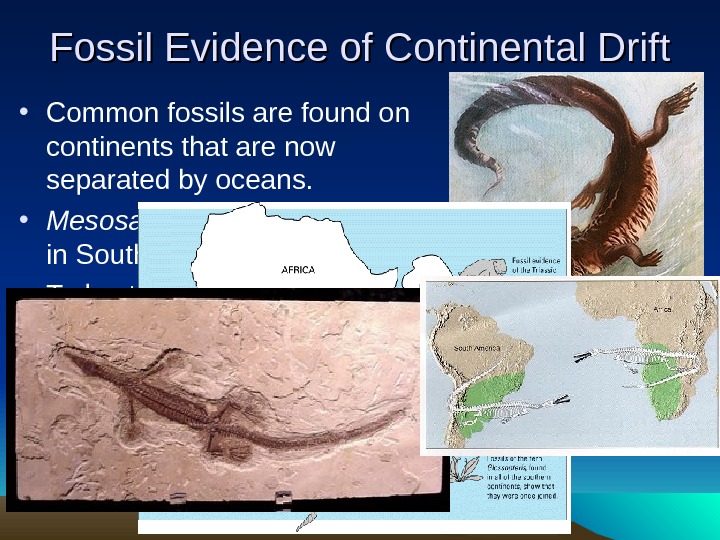 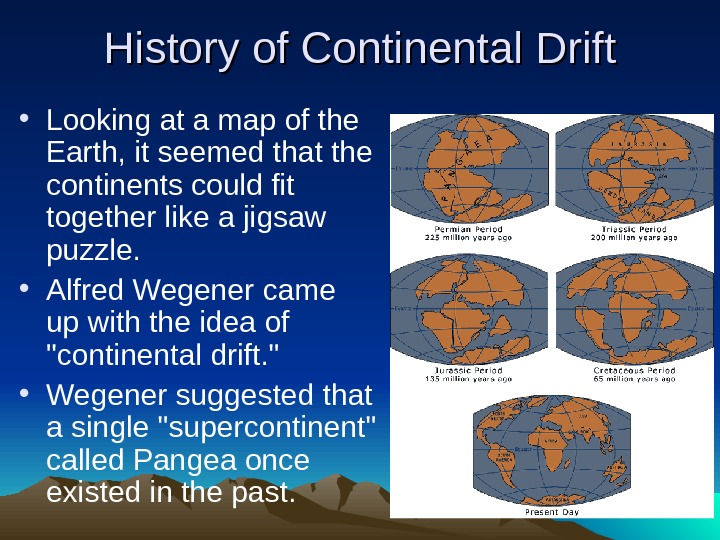 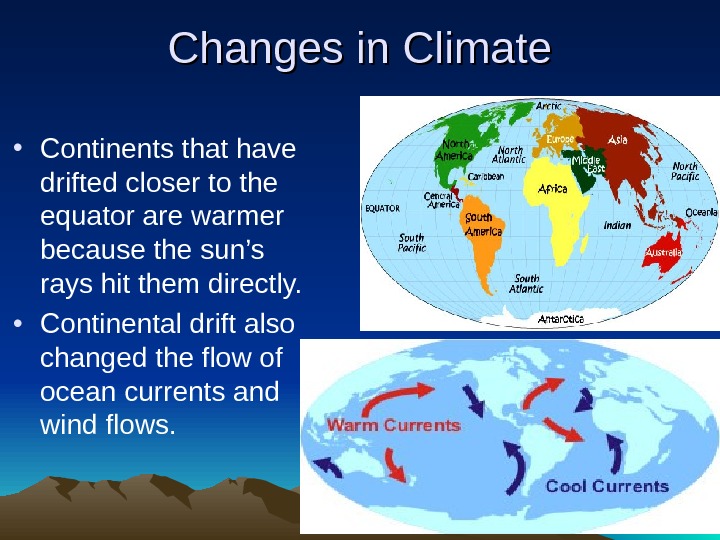 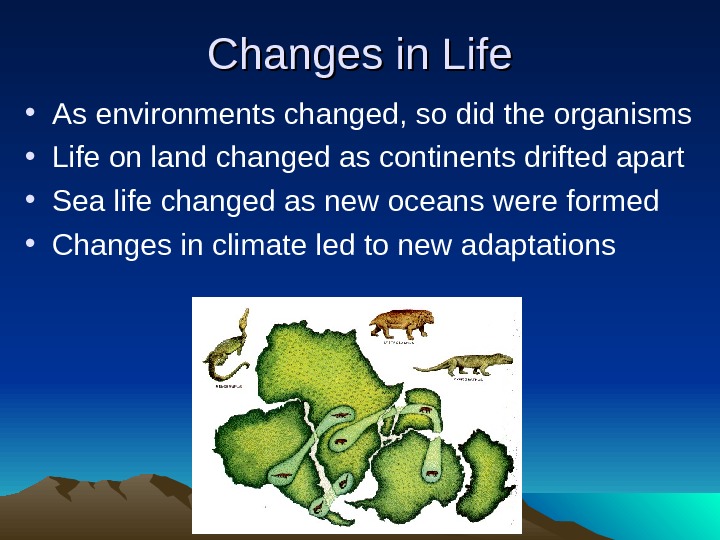 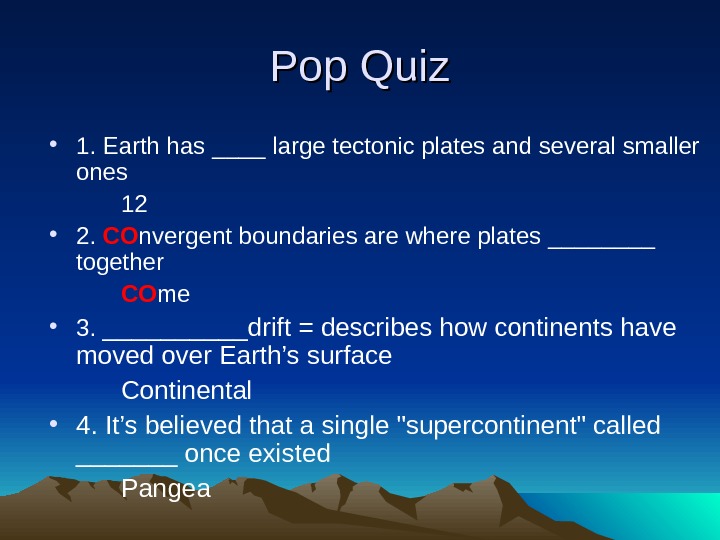 Put the Plates on the Mantle! • These plates rest on a layer of rock called the mantle. • The mantle moves very slowly, dragging the tectonic plates on top of it.

• Plates move as fast as your fingernails grow! (only 2 — 5 cm per year) • Over a very long period of time this can amount to thousands of miles of movement

DIVergent Boundaries • Plates that DIVide produce a “rift” – a giant crack • If a rift tears apart a continent and widens for millions of years, a new sea forms (and can gradually form a new ocean)

COnvergent Boundaries • When two continental (land) plates COme together, a mountain belt is formed • But when a continental plate COllides with an oceanic plate, the oceanic plates sinks and melts rock. Then the molten rock rises and forms a line of volcanoes

History of Continental Drift • Looking at a map of the Earth, it seemed that the continents could fit together like a jigsaw puzzle. • Alfred Wegener came up with the idea of «continental drift. » • Wegener suggested that a single «supercontinent» called Pangea once existed in the past.

Changes in Climate • Continents that have drifted closer to the equator are warmer because the sun’s rays hit them directly. • Continental drift also changed the flow of ocean currents and wind flows.

Changes in Life • As environments changed, so did the organisms • Life on land changed as continents drifted apart • Sea life changed as new oceans were formed • Changes in climate led to new adaptations

Pop Quiz • 1. Earth has ____ large tectonic plates and several smaller ones 12 • 2. CO nvergent boundaries are where plates ____ together CO me • 3. _____drift = describes how continents have moved over Earth’s surface Continental • 4. It’s believed that a single «supercontinent» called _______ once existed Pangea