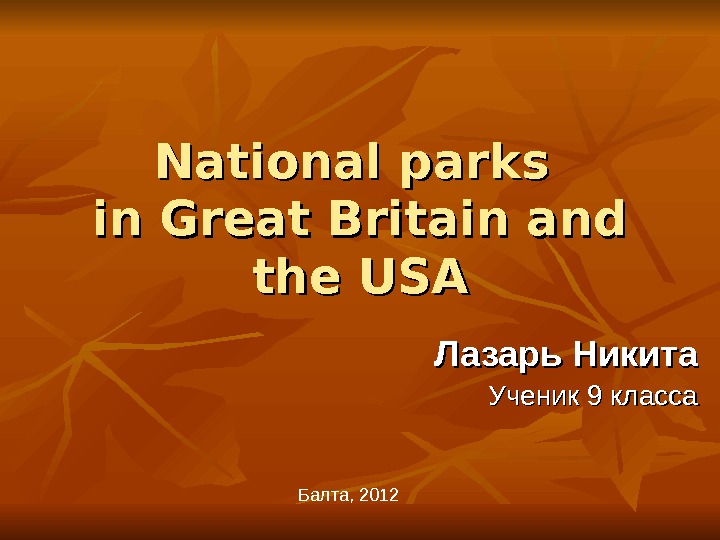 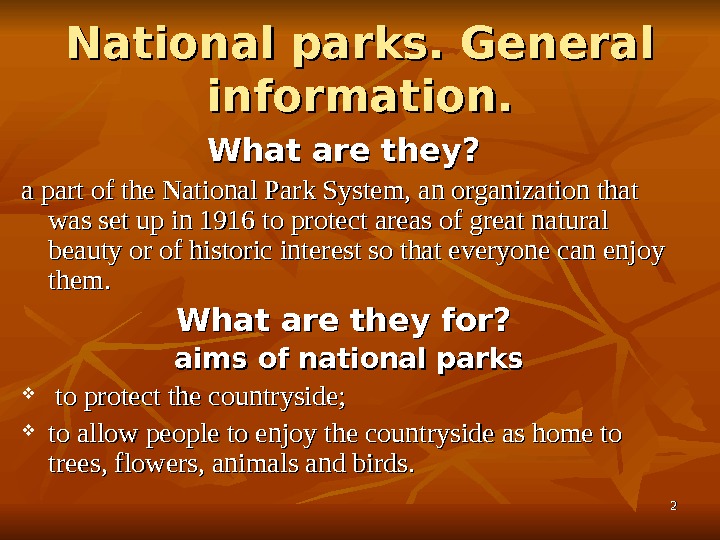 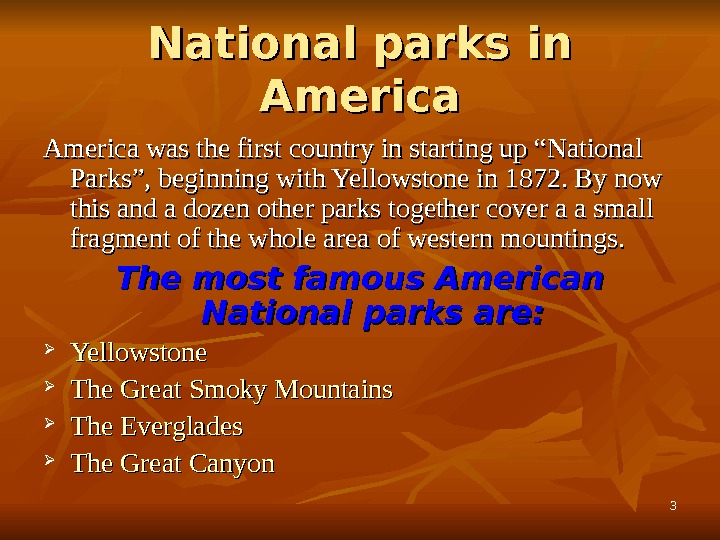 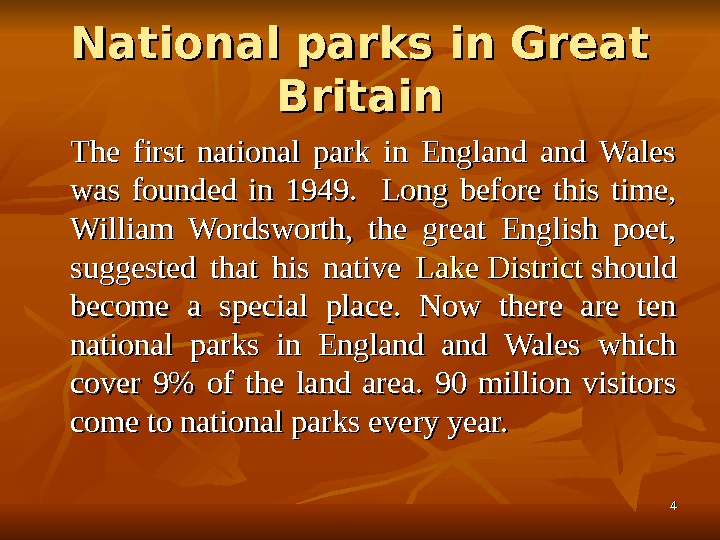 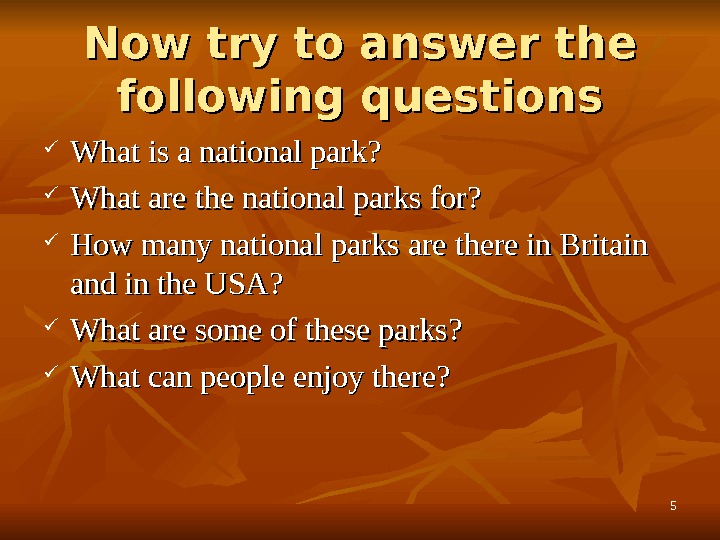 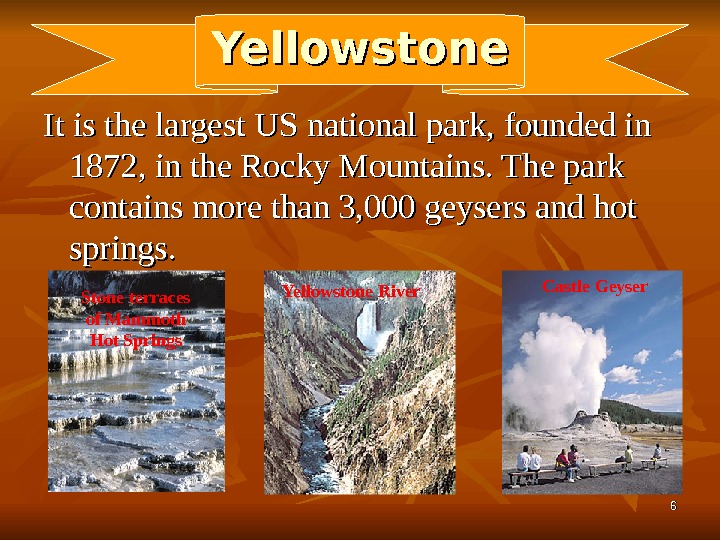 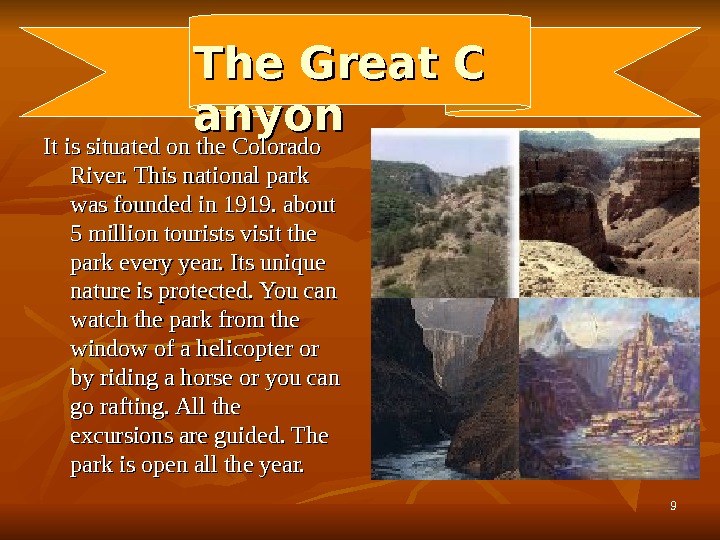 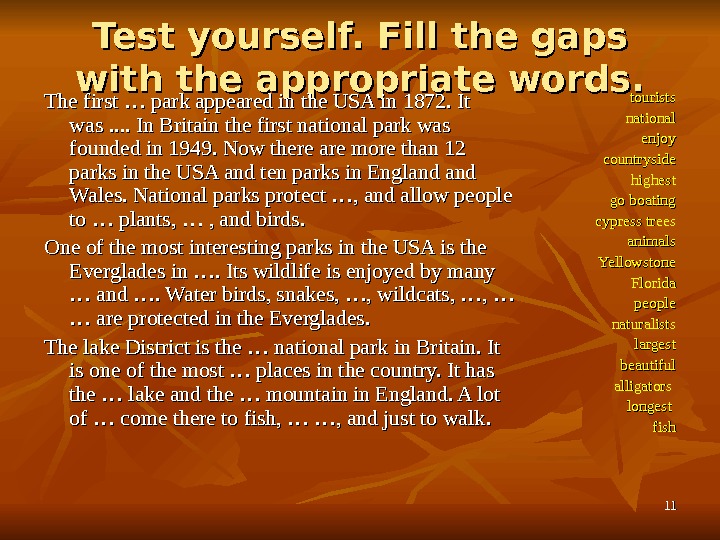 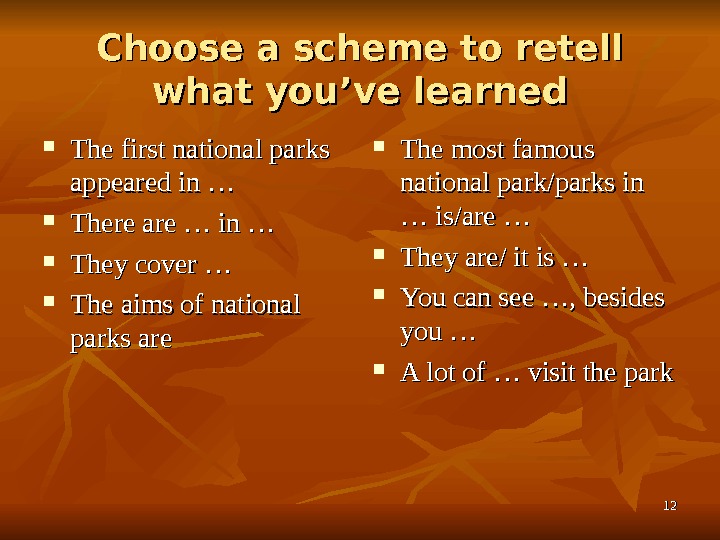 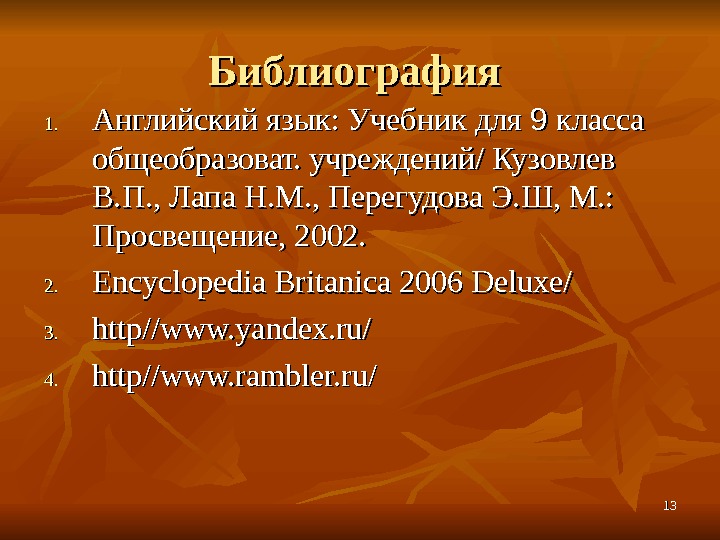 22 National parks. General information. What are they? a part of the National Park System, an organization that was set up in 1916 to protect areas of great natural beauty or of historic interest so that everyone can enjoy them. What are they for? aims of national parks to protect the countryside; to allow people to enjoy the countryside as home to trees, flowers, animals and birds.

33 National parks in America was the first country in starting up “National Parks”, beginning with Yellowstone in 1872. By now this and a dozen other parks together cover a a small fragment of the whole area of western mountings. The most famous American National parks are: Yellowstone The Great Smoky Mountains The Everglades The Great Canyon

66 Yellowstone It is the largest US national park, founded in 1872, in the Rocky Mountains. The park contains more than 3, 000 geysers and hot springs. Yellowstone River Castle Geyser Stone terraces of Mammoth Hot Springs

77 Everglades The Everglades, Florida is one of the most interesting places. The Everglades is protected as a national park. Its unique ecology – home to water birds, snakes, alligators, wildcats, fish, cypress trees – is enjoyed by naturalists and tourists. Views of Everglades

88 Lake District The largest national park in the northwest of England. It is popular with walkers, cyclists, and people who go boating. It is one of the most beautiful and attractive places. It has Windermere, the longest lake in England, and Scafell, the highest mountain in England. Was unknown until the end of the 18 thth century. Then the works of such writers as Wordsworth and Coleridge attracted visitors to the lakes. Now the Lake District is one of the most popular tourist places in Britain. It is a place where you can enjoy fishing in the rivers and lakes or boating on the quiet waters of Lakeland.

99 The Great C anyon It is situated on the Colorado River. This national park was founded in 1919. about 5 million tourists visit the park every year. Its unique nature is protected. You can watch the park from the window of a helicopter or by riding a horse or you can go rafting. All the excursions are guided. The park is open all the year.

1010 The Great Sm oky Mountain ss. It is a popular resort area that includes the national park, and the Blue Ridge Parkway (a motor route). A highway crosses at Newfound Gap (5, 046 feet). The area is covered by forests, of which about 40 percent is virgin growth, the Great Smokies support an abundance of rhododendron, wildflowers, and animal life.

1111 Test yourself. Fill the gaps with the appropriate words. The first … park appeared in the USA in 1872. It was. . . . In Britain the first national park was founded in 1949. Now there are more than 12 parks in the USA and ten parks in England and Wales. National parks protect …, and allow people to … plants, … , and birds. One of the most interesting parks in the USA is the Everglades in …. Its wildlife is enjoyed by many … and …. Water birds, snakes, …, wildcats, …, … … are protected in the Everglades. The lake District is the … national park in Britain. It is one of the most … places in the country. It has the … lake and the … mountain in England. A lot of … come there to fish, … …, and just to walk. . tourists national enjoy countryside highest go boating cypress trees animals Yellowstone Florida people naturalists largest beautiful alligators longest fish

1212 Choose a scheme to retell what you’ve learned The first national parks appeared in … There are … in … They cover … The aims of national parks are The most famous national park/parks in … is/are … They are/ it is … You can see …, besides you … A lot of … visit the park