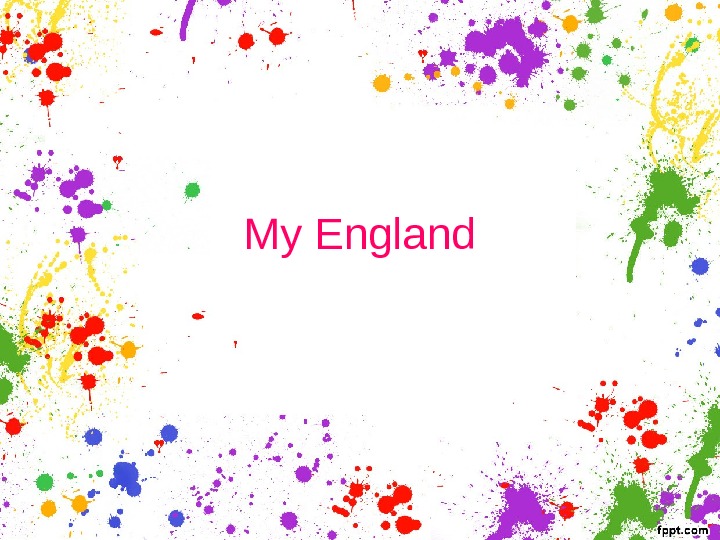 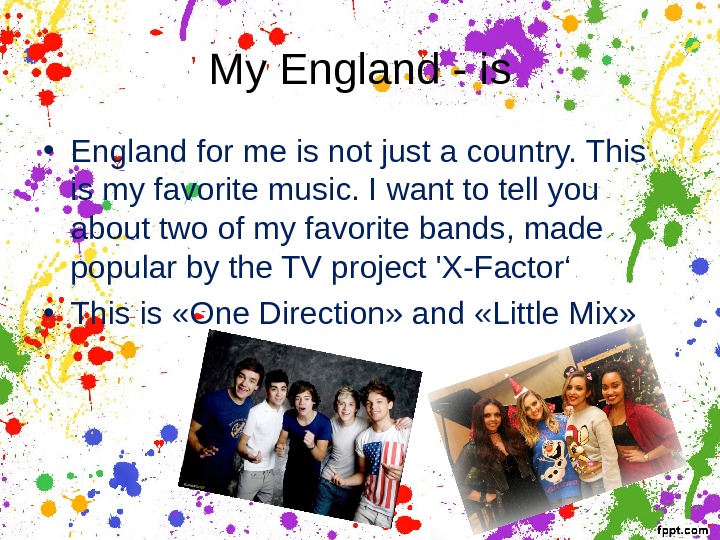 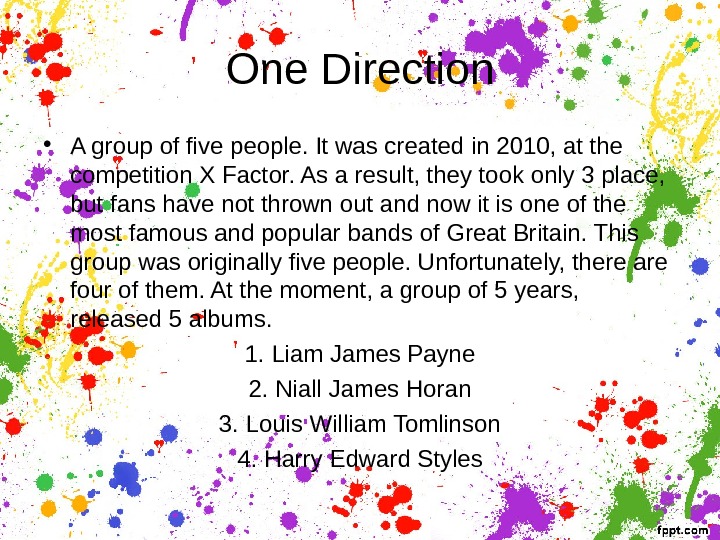 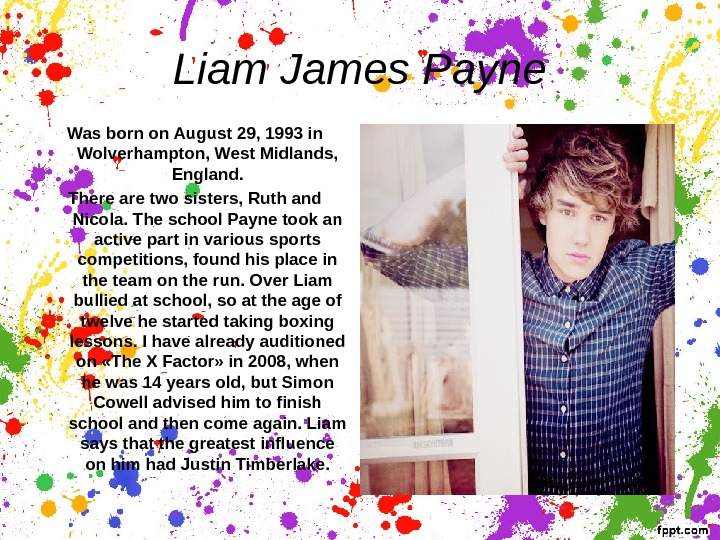 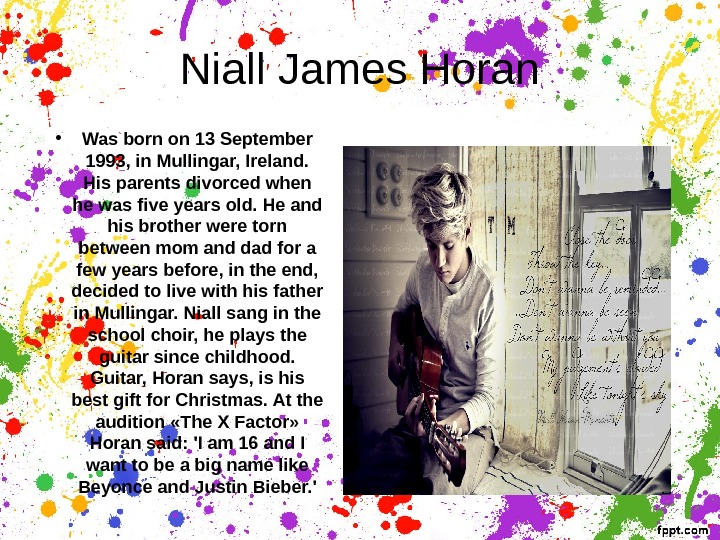 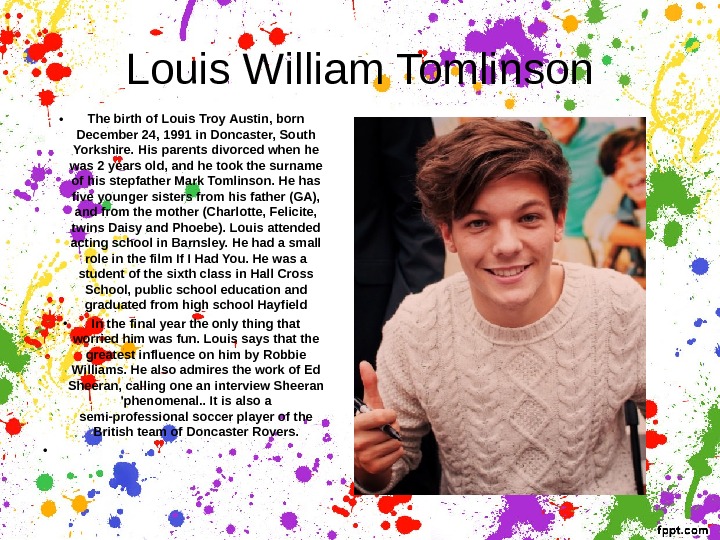 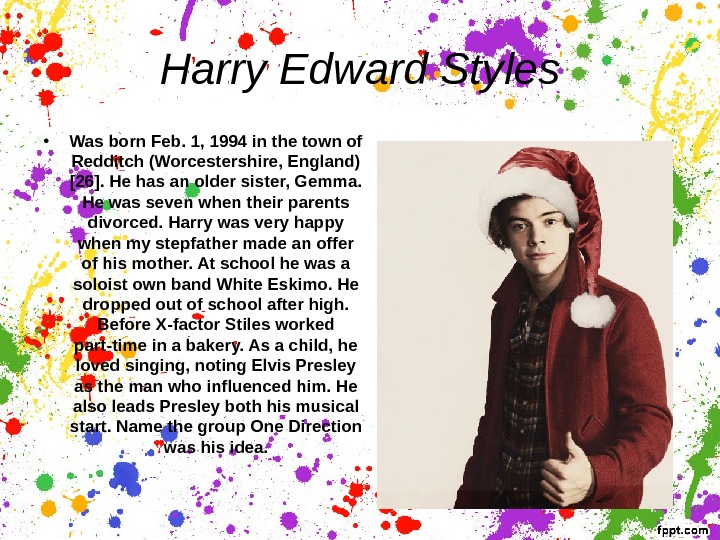 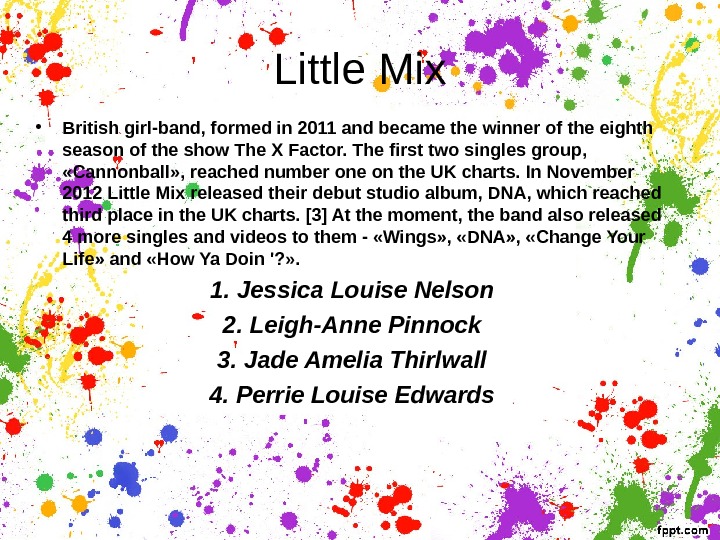 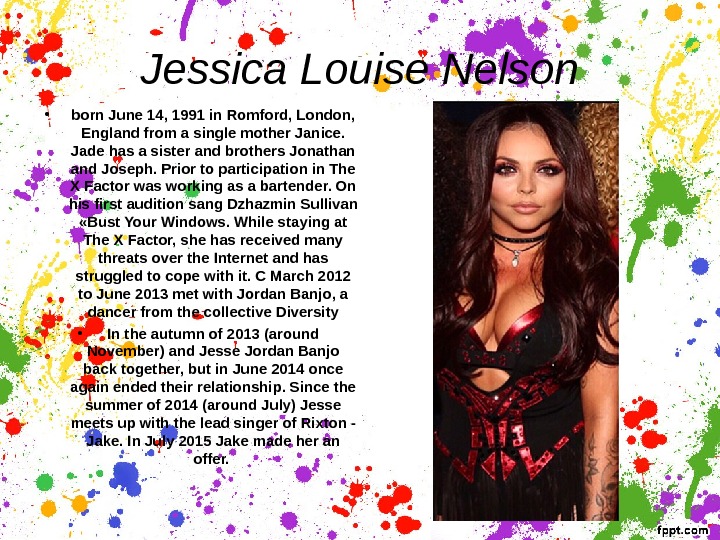 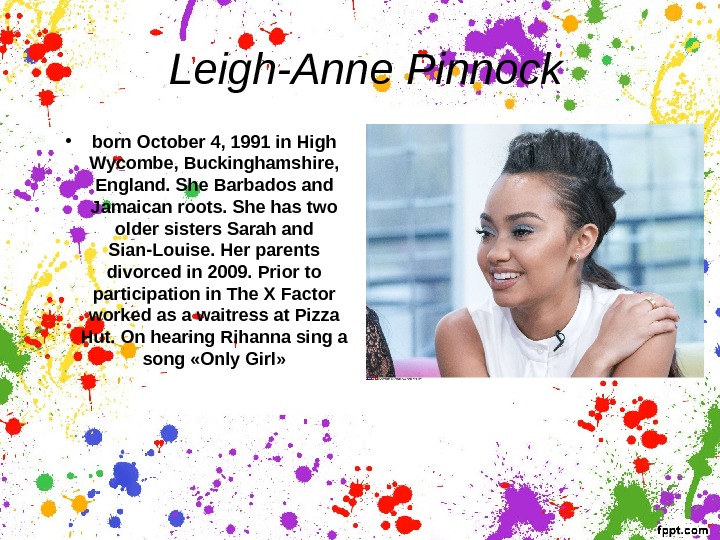 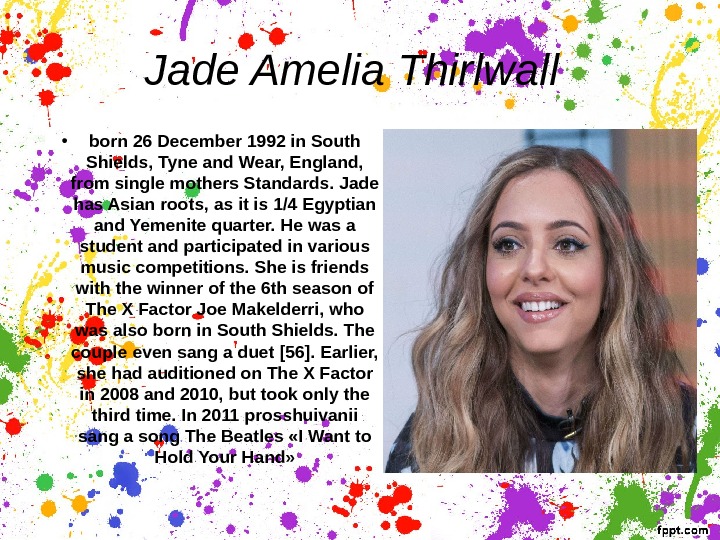 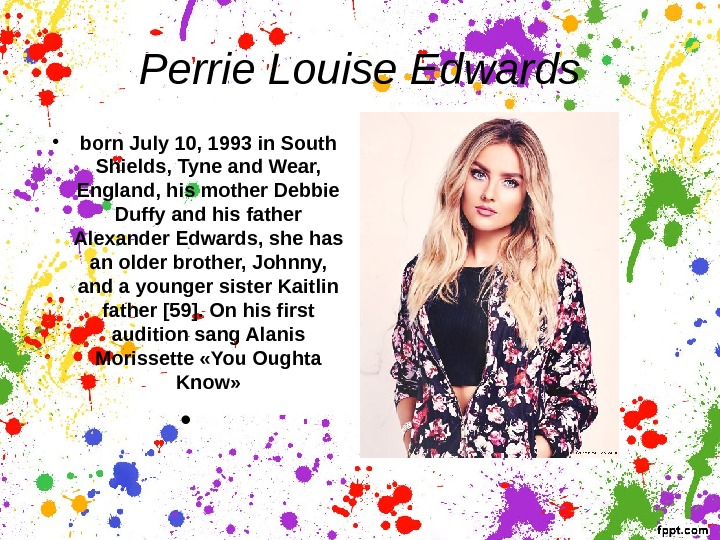 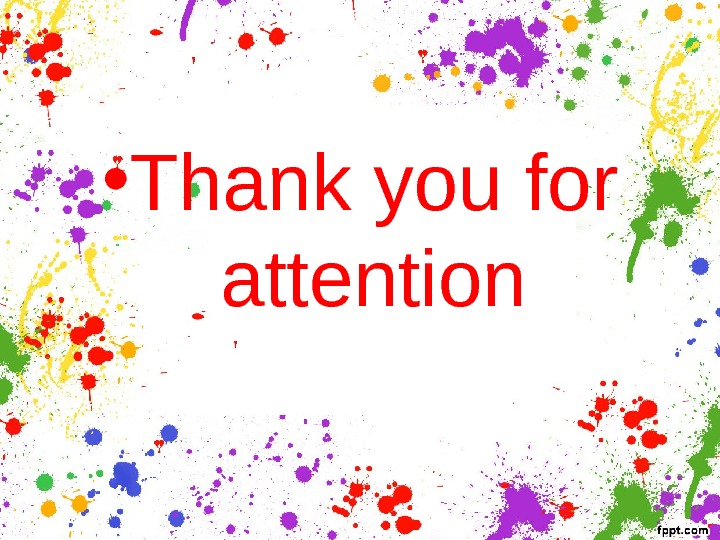 My England — is • England for me is not just a country. This is my favorite music. I want to tell you about two of my favorite bands, made popular by the TV project ‘X-Factor‘ • This is « One Direction » and « Little Mix »

One Direction • A group of five people. It was created in 2010, at the competition X Factor. As a result, they took only 3 place, but fans have not thrown out and now it is one of the most famous and popular bands of Great Britain. This group was originally five people. Unfortunately, there are four of them. At the moment, a group of 5 years, released 5 albums. 1. Liam James Payne 2. Niall James Horan 3. Louis William Tomlinson 4. Harry Edward Styles

Liam James Payne Was b orn on August 29, 1993 in Wolverhampton, West Midlands, England. There are two sisters, Ruth and Nicola. The school Payne took an active part in various sports competitions, found his place in the team on the run. Over Liam bullied at school, so at the age of twelve he started taking boxing lessons. I have already auditioned on «The X Factor» in 2008, when he was 14 years old, but Simon Cowell advised him to finish school and then come again. Liam says that the greatest influence on him had Justin Timberlake.

Niall James Horan • Was born on 13 September 1993, in Mullingar, Ireland. His parents divorced when he was five years old. He and his brother were torn between mom and dad for a few years before, in the end, decided to live with his father in Mullingar. Niall sang in the school choir, he plays the guitar since childhood. Guitar, Horan says, is his best gift for Christmas. At the audition «The X Factor» Horan said: ‘I am 16 and I want to be a big name like Beyonce and Justin Bieber. ‘

Louis William Tomlinson • The birth of Louis Troy Austin, born December 24, 1991 in Doncaster, South Yorkshire. His parents divorced when he was 2 years old, and he took the surname of his stepfather Mark Tomlinson. He has five younger sisters from his father (GA), and from the mother (Charlotte, Felicite, twins Daisy and Phoebe). Louis attended acting school in Barnsley. He had a small role in the film If I Had You. He was a student of the sixth class in Hall Cross School, public school education and graduated from high school Hayfield • In the final year the only thing that worried him was fun. Louis says that the greatest influence on him by Robbie Williams. He also admires the work of Ed Sheeran, calling one an interview Sheeran ‘phenomenal. . It is also a semi-professional soccer player of the British team of Doncaster Rovers. •

Harry Edward Styles • Was born Feb. 1, 1994 in the town of Redditch (Worcestershire, England) [26]. He has an older sister, Gemma. He was seven when their parents divorced. Harry was very happy when my stepfather made an offer of his mother. At school he was a soloist own band White Eskimo. He dropped out of school after high. Before X-factor Stiles worked part-time in a bakery. As a child, he loved singing, noting Elvis Presley as the man who influenced him. He also leads Presley both his musical start. Name the group One Direction was his idea.

Little Mix • British girl-band, formed in 2011 and became the winner of the eighth season of the show The X Factor. The first two singles group, «Cannonball» , reached number one on the UK charts. In November 2012 Little Mix released their debut studio album, DNA, which reached third place in the UK charts. [3] At the moment, the band also released 4 more singles and videos to them — «Wings» , «DNA» , «Change Your Life» and «How Ya Doin ‘? » . 1. Jessica Louise Nelson 2. Leigh-Anne Pinnock 3. Jade Amelia Thirlwall 4. Perrie Louise Edwards

Jessica Louise Nelson • born June 14, 1991 in Romford, London, England from a single mother Janice. Jade has a sister and brothers Jonathan and Joseph. Prior to participation in The X Factor was working as a bartender. On his first audition sang Dzhazmin Sullivan «Bust Your Windows. While staying at The X Factor, she has received many threats over the Internet and has struggled to cope with it. C March 2012 to June 2013 met with Jordan Banjo, a dancer from the collective Diversity • In the autumn of 2013 (around November) and Jesse Jordan Banjo back together, but in June 2014 once again ended their relationship. Since the summer of 2014 (around July) Jesse meets up with the lead singer of Rixton — Jake. In July 2015 Jake made her an offer.

Leigh-Anne Pinnock • born October 4, 1991 in High Wycombe, Buckinghamshire, England. She Barbados and Jamaican roots. She has two older sisters Sarah and Sian-Louise. Her parents divorced in 2009. Prior to participation in The X Factor worked as a waitress at Pizza Hut. On hearing Rihanna sing a song «Only Girl »

Jade Amelia Thirlwall • born 26 December 1992 in South Shields, Tyne and Wear, England, from single mothers Standards. Jade has Asian roots, as it is 1/4 Egyptian and Yemenite quarter. He was a student and participated in various music competitions. She is friends with the winner of the 6 th season of The X Factor Joe Makelderri, who was also born in South Shields. The couple even sang a duet [56]. Earlier, she had auditioned on The X Factor in 2008 and 2010, but took only the third time. In 2011 prosshuivanii sang a song The Beatles «I Want to Hold Your Hand»

Perrie Louise Edwards • born July 10, 1993 in South Shields, Tyne and Wear, England, his mother Debbie Duffy and his father Alexander Edwards, she has an older brother, Johnny, and a younger sister Kaitlin father [59]. On his first audition sang Alanis Morissette «You Oughta Know» •

• Thank you for attention