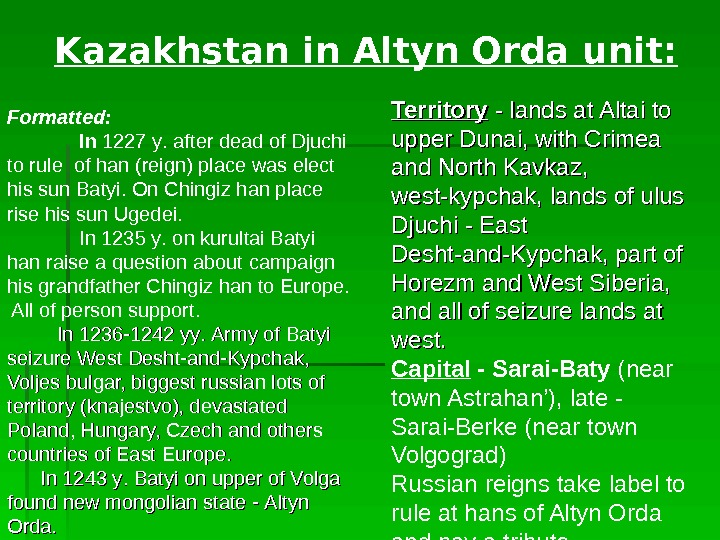 Theme # 5: Kazakhstan in mongol conquest epochs Questions: 1. The formations of the Mongolian state 2. The campaigns of Chingiz-khan and heirs. ЗЗ. The chingizids uluses. 44. . The moguls domination results

1 question: The formations of the Mongolian state In the first mongol tribes live between rivers – Orhon and Kerulen. In middle of XII c. . They went to west, smash at Mongol Altai and upper of Irtysh the naiman and Kypchak. At this time mongol leaved on the territory at Baikal, upper of Enisei and Irtysh on north to Gobi desert on east. . The kypchak khanate in end fall at mongol campaign and territory unit in Djuchi ulus in south. In 20 years Chingiz han suppression separate tribes of Altai and in 1206 year kurultai (council) of mongols on the Orhon and Kerulen rivers coast was declare about formation of Mongol state and Temuchin receive the name higher reign — Chingiz han. Capital was Karakorum. . So, in beginning of XIII c. . in Middle Asia formatted new war-feudal state. Army: The army have iron discipline and higher militant. Chingiz han had personal Guardia at 10 thousand select solders — “kushuk”. . The to the strongest of state in 1206 years codec of law — — « « Iacy » .

2 question: The campaigns of Chingiz-khan and heirs. . At time of formation the state was found to seizure campaign. The base reasons of campaign : : • • Necessity of in extension of frontier of state. • • Necessity of in extension of pasture lands. • • To mongol important persons — new persons, who pay a tribute and military reserve to conduct the wars. . • • To satisfaction of demand of nomadic important persons, obstacle the inside discord and into wars. .

In In 1218 years into Chingiz han and Horezm shah Muhammad was conclude the trade agreement. But in summer of 1218 y. Chingiz han take a chance to went to Kazakhstan — Otrar catastrophe: 1)1) Mongol direction trade caravan at 450 person and 500 camel to Otrar. But the leader of Otrar Gairhan suspect this caravan in espionage, kill him and rob. In result Chingiz han demand this leader at Horezmshah, but he doesn’t fulfill this and kill mongols ambassador. 2) In result there was occasion to went the Kazakhstan and Middle Asia territory.

The mongol conquest of East Kazakhstan : : In september of 1 219 yy. . at Irtysh begin the campaign with 150 thousand solders: 111 thousand of mongol and others was — uigur and karluk. . About Otrar — some tumen of Chingiz han sun’s Chagatai and Ugedei encircled the town at 5 month. Then one of military head — Karadja betray and with 10 thousand solders went to mongol, open the town doors. But 1 month still Gairhan defend oneself in citadel’ (inside building) to last solder and then was killed. Otrar was fall at february of 1220, population banish, the wool’s of town was turn to ruins. Town on Syr-Darya render the persistent opposition: Sygnak opposite 7 days, after seizure the all of population was killed, town was destroy. Then was seizure next towns Jent, Uzgench and others on East Kazakhstan. . In spring of 1221 yy. . seizure of Middle Asia was end. .

In In 1224 yy. . Chingiz han went out to Mongolia through the Kazakh steppe. . So in 1219 -1224 yyyy. . In result of seizure politic of mongol territory of Kazakhstan unit to mongol structure of mongol imperia. The important persons came to work to mongol, the ordinate nomad was make us of formation new lots of mongolian army. In 1227 y. Chingiz han was dead and big mongol imperia begin to separate. Results:

ЗЗ question: The chingizids uluses. Djuchi — first sun was rule in most of steppe at Irtysh to Volga, north party of Semirech’e, all of East Desht-and-Kypchak to under Povolj’a Jagatai — Horezm and next time the west lands, South and South-east Kazakhstan, East Turkistan and Maveranahr Ugedei — North-East party of Jetysu, West Mongolia, regions of higher Irtysh and Tarbagatai. Tului — — the mongolian lands. Territory of Kazakhstan was divided into first 4 suns of Chingiz han: Territory of K-n was divide to 3 party.

Formatted: In 1227 y. after dead of Djuchi to rule of han (reign) place was elect his sun Batyi. On Chingiz han place rise his sun Ugedei. In 1235 y. on kurultai Batyi han raise a question about campaign his grandfather Chingiz han to Europe. All of person support. In In 1236 -1242 yyyy. . Army of Batyi seizure West Desht-and-Kypchak, Voljes bulgar, biggest russian lots of territory (knajestvo), devastated Poland, Hungary, Czech and others countries of East Europe. In. In 1243 yy. . Batyi on upper of Volga found new mongolian state — — Altyn Orda. . Kazakhstan in Altyn Orda unit: Territory — — lands at Altai to upper Dunai, with Crimea and North Kavkaz, west-kypchak, lands of ulus Djuchi — East Desht-and-Kypchak, part of Horezm and West Siberia, and all of seizure lands at west. . Capital — Sarai-Baty ( near town Astrahan’ ), late — Sarai-Berke (near town Volgograd) Russian reigns take label to rule at hans of Altyn Orda and pay a tribute.