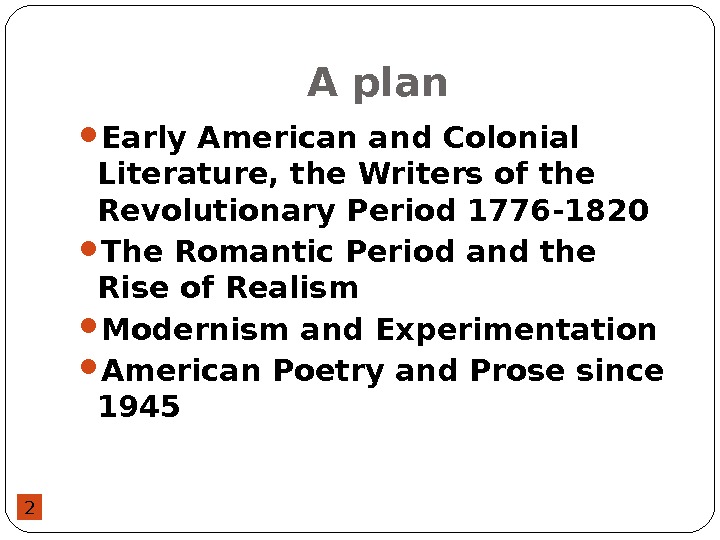 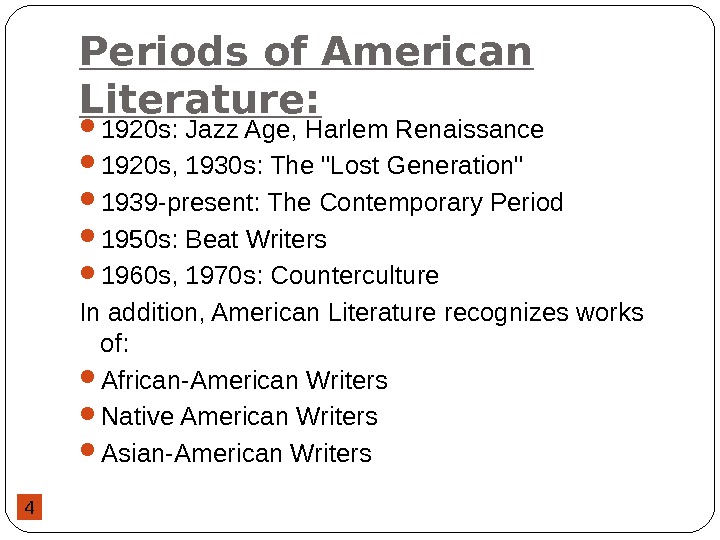 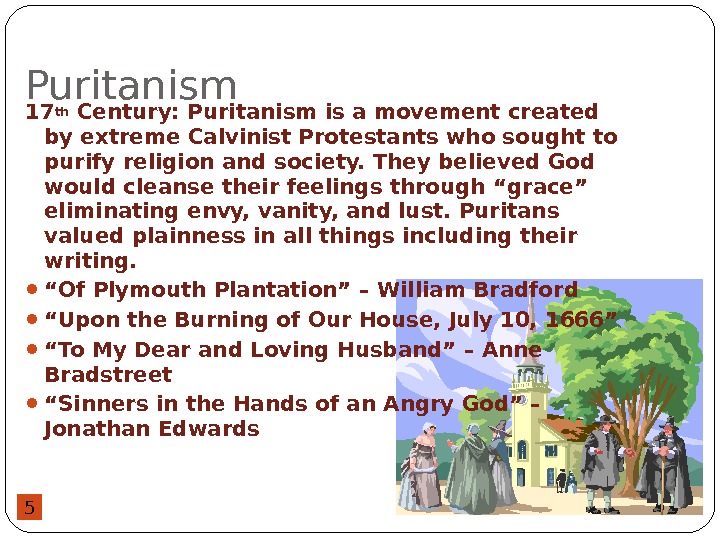 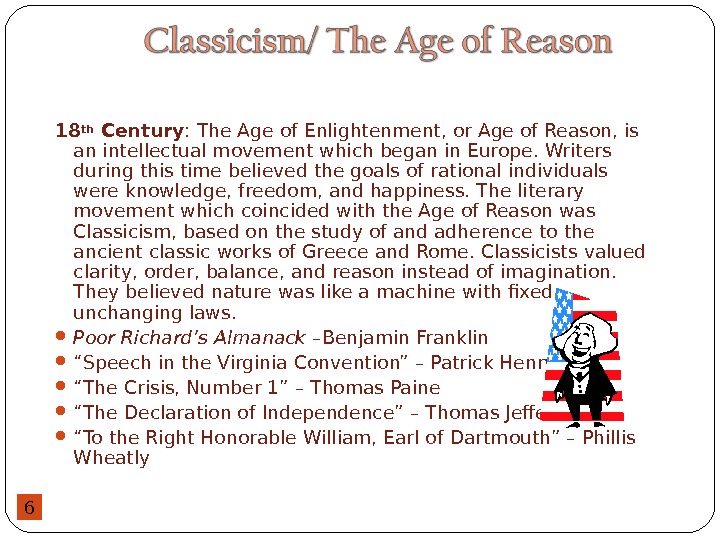 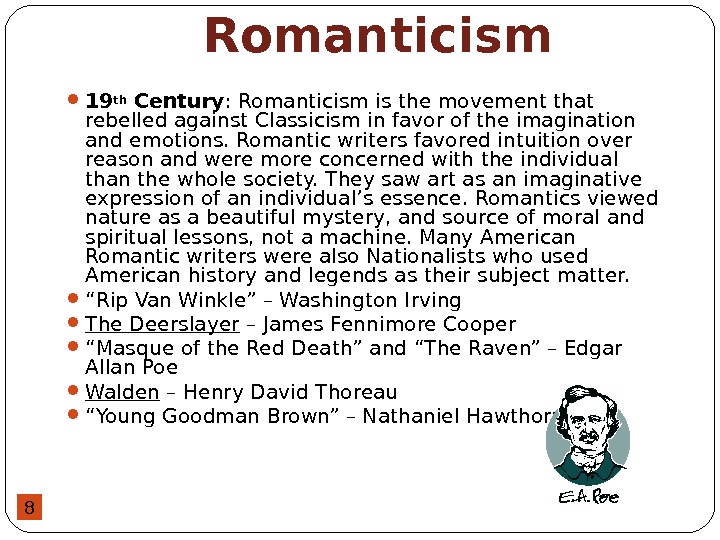 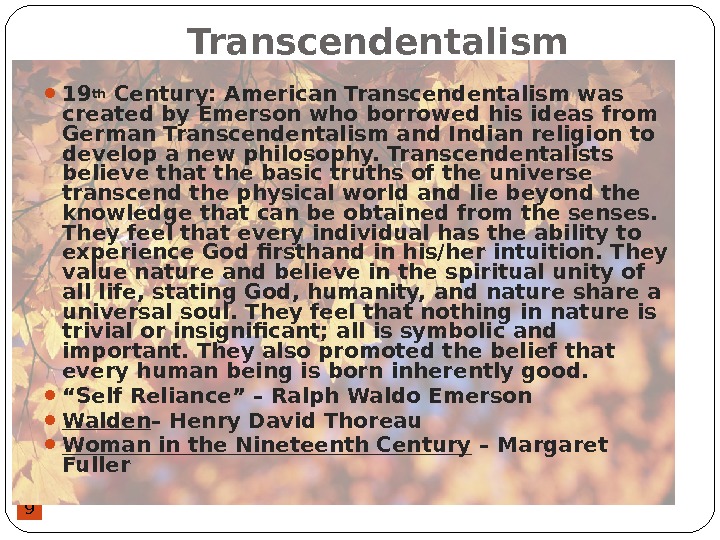 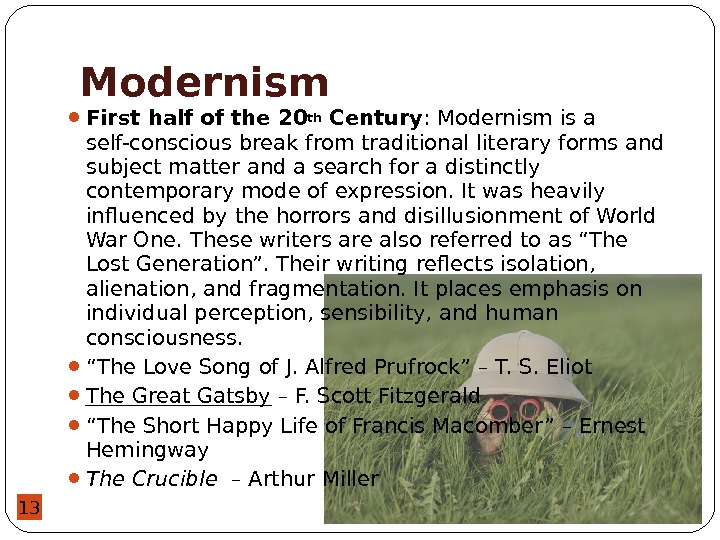 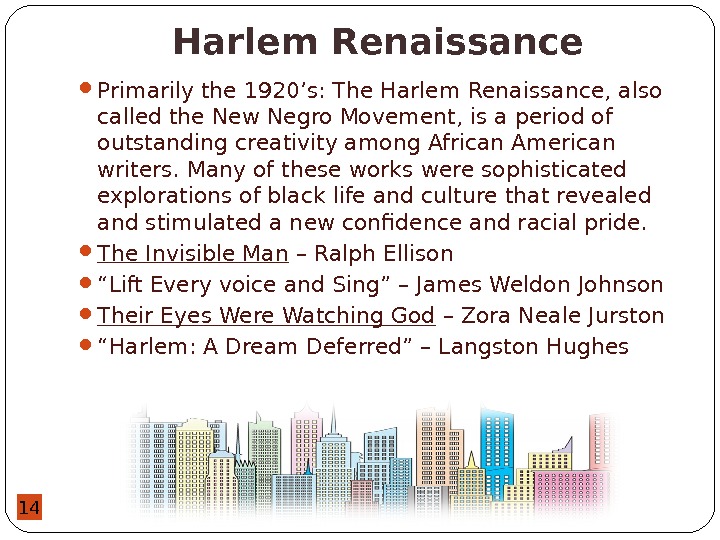 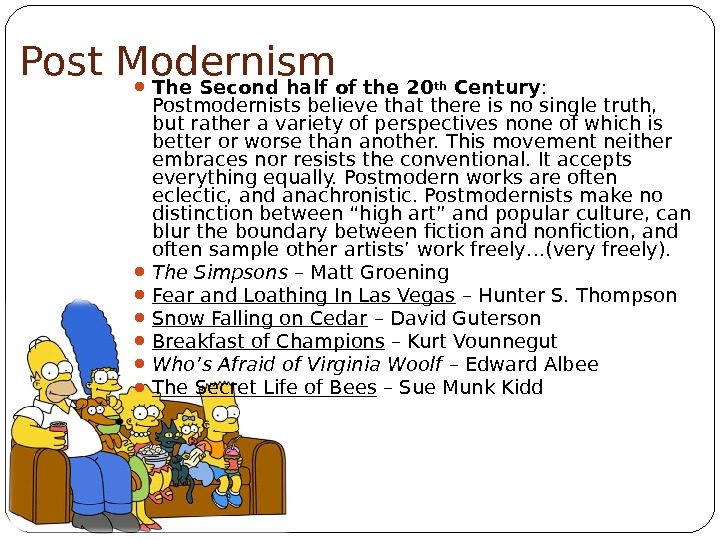 2 A plan Early American and Colonial Literature, the Writers of the Revolutionary Period 1776 -1820 The Romantic Period and the Rise of Realism Modernism and Experimentation American Poetry and Prose since

5 Puritanism 17 th Century: Puritanism is a movement created by extreme Calvinist Protestants who sought to purify religion and society. They believed God would cleanse their feelings through “grace” eliminating envy, vanity, and lust. Puritans valued plainness in all things including their writing. “ Of Plymouth Plantation” – William Bradford “ Upon the Burning of Our House, July 10, 1666” “ To My Dear and Loving Husband” – Anne Bradstreet “ Sinners in the Hands of an Angry God” – Jonathan Edwards

6 18 th Century : The Age of Enlightenment, or Age of Reason, is an intellectual movement which began in Europe. Writers during this time believed the goals of rational individuals were knowledge, freedom, and happiness. The literary movement which coincided with the Age of Reason was Classicism, based on the study of and adherence to the ancient classic works of Greece and Rome. Classicists valued clarity, order, balance, and reason instead of imagination. They believed nature was like a machine with fixed, unchanging laws. Poor Richard’s Almanack –Benjamin Franklin “ Speech in the Virginia Convention” – Patrick Henry “ The Crisis, Number 1” – Thomas Paine “ The Declaration of Independence” – Thomas Jefferson “ To the Right Honorable William, Earl of Dartmouth” – Phillis Wheatly

7 Nationalism in Literature Late 18 th Century to Early 19 th Century : Nationalism developed from pride, patriotism, and the desire to be distinctly different from the Europeans. American writers tried to write stories and poems unlike European Romantic writers, but they largely failed in their efforts. “ Rip Van Winkle” – Washington Irving The Deerslayer – James Fennimore Cooper

8 Romanticism 19 th Century : Romanticism is the movement that rebelled against Classicism in favor of the imagination and emotions. Romantic writers favored intuition over reason and were more concerned with the individual than the whole society. They saw art as an imaginative expression of an individual’s essence. Romantics viewed nature as a beautiful mystery, and source of moral and spiritual lessons, not a machine. Many American Romantic writers were also Nationalists who used American history and legends as their subject matter. “ Rip Van Winkle” – Washington Irving The Deerslayer – James Fennimore Cooper “ Masque of the Red Death” and “The Raven” – Edgar Allan Poe Walden – Henry David Thoreau “ Young Goodman Brown” – Nathaniel Hawthorne

9 Transcendentalism 19 th Century: American Transcendentalism was created by Emerson who borrowed his ideas from German Transcendentalism and Indian religion to develop a new philosophy. Transcendentalists believe that the basic truths of the universe transcend the physical world and lie beyond the knowledge that can be obtained from the senses. They feel that every individual has the ability to experience God firsthand in his/her intuition. They value nature and believe in the spiritual unity of all life, stating God, humanity, and nature share a universal soul. They feel that nothing in nature is trivial or insignificant; all is symbolic and important. They also promoted the belief that every human being is born inherently good. “ Self Reliance” – Ralph Waldo Emerson Walden – Henry David Thoreau Woman in the Nineteenth Century – Margaret Fuller

11 Realism Late 19 th Century to Early 20 th Century : Realism, unlike Romanticism, places less emphasis on the imagination and more on observed fact. These writers viewed the world and human behavior scientifically, mirroring realities without softening or idealizing them. This movement is often considered a rebellion against Romanticism. The Adventures of Huckleberry Finn – Mark Twain My Antonia – Willa Cather

12 Naturalism Late 19 th Century to Early 20 th Century : Naturalism was a significant offshoot of Realism. Many American authors were influenced by this movement. Naturalism demands that writers penetrate the surface of life and human character. It focuses on inherited traits and environmental conditions (nature and nurture). Naturalism usually explores the negative aspects of society. These authors did not judge their characters’ morality, but rather viewed them through a social Darwinist lens. Naturalists believed that chance exists but free will is rarely possible. The Red Badge of Courage – Stephen Crane Of Mice and Men and The Grapes of Wrath – John Steinbeck

13 Modernism First half of the 20 th Century : Modernism is a self-conscious break from traditional literary forms and subject matter and a search for a distinctly contemporary mode of expression. It was heavily influenced by the horrors and disillusionment of World War One. These writers are also referred to as “The Lost Generation”. Their writing reflects isolation, alienation, and fragmentation. It places emphasis on individual perception, sensibility, and human consciousness. “ The Love Song of J. Alfred Prufrock” – T. S. Eliot The Great Gatsby – F. Scott Fitzgerald “ The Short Happy Life of Francis Macomber” – Ernest Hemingway The Crucible – Arthur Miller

14 Harlem Renaissance Primarily the 1920’s: The Harlem Renaissance, also called the New Negro Movement, is a period of outstanding creativity among African American writers. Many of these works were sophisticated explorations of black life and culture that revealed and stimulated a new confidence and racial pride. The Invisible Man – Ralph Ellison “ Lift Every voice and Sing” – James Weldon Johnson Their Eyes Were Watching God – Zora Neale Jurston “ Harlem: A Dream Deferred” – Langston Hughes

15 Post Modernism The Second half of the 20 th Century : Postmodernists believe that there is no single truth, but rather a variety of perspectives none of which is better or worse than another. This movement neither embraces nor resists the conventional. It accepts everything equally. Postmodern works are often eclectic, and anachronistic. Postmodernists make no distinction between “high art” and popular culture, can blur the boundary between fiction and nonfiction, and often sample other artists’ work freely…(very freely). The Simpsons – Matt Groening Fear and Loathing In Las Vegas – Hunter S. Thompson Snow Falling on Cedar – David Guterson Breakfast of Champions – Kurt Vounnegut Who’s Afraid of Virginia Woolf – Edward Albee The Secret Life of Bees – Sue Munk Kidd