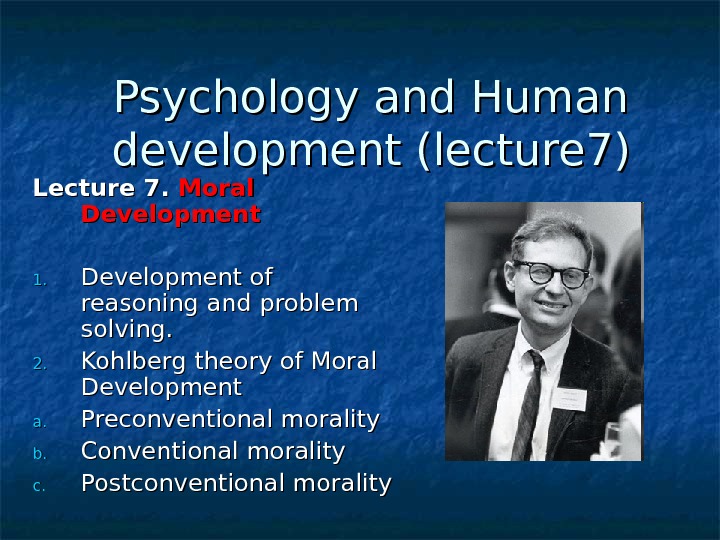 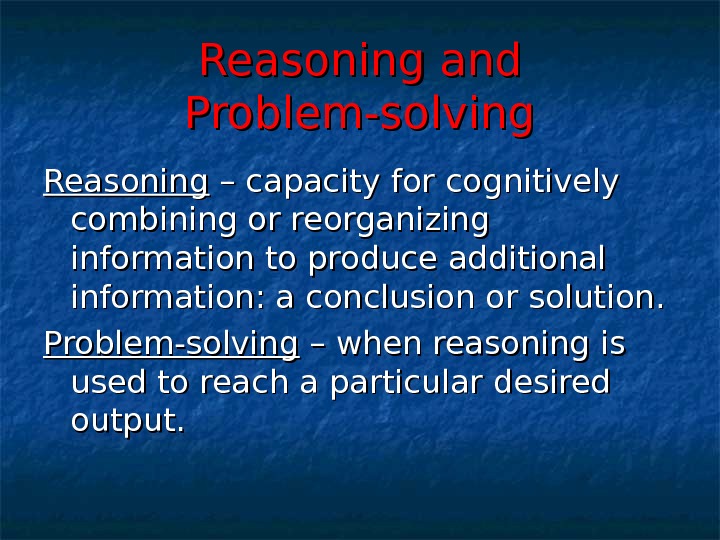 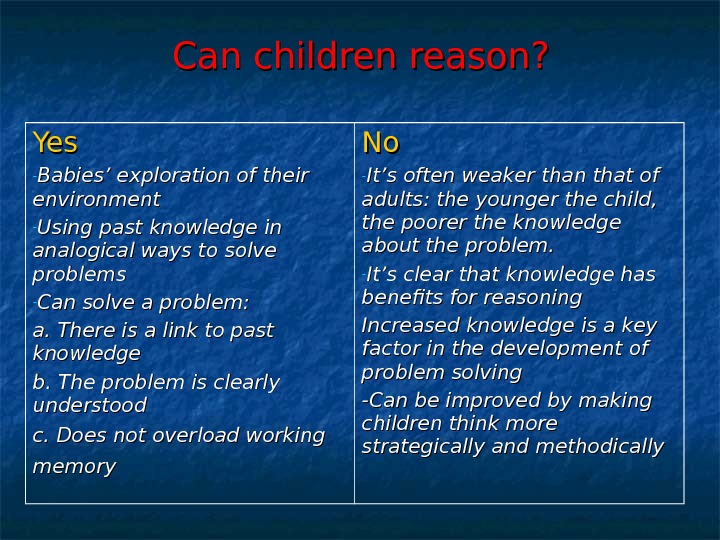 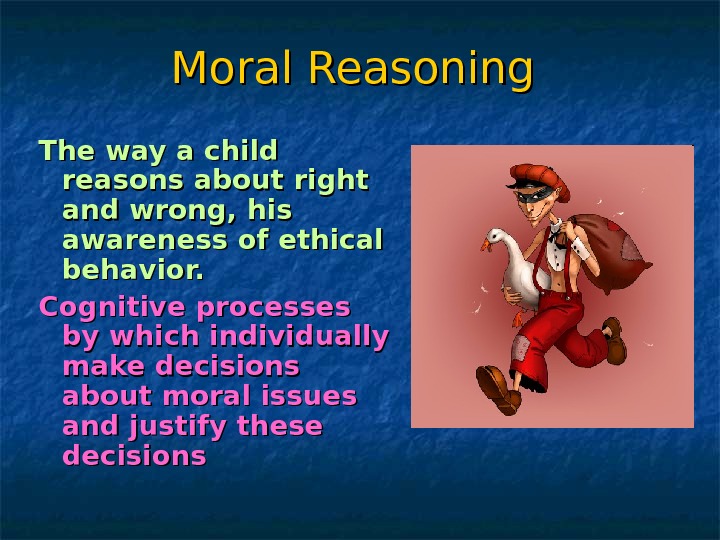 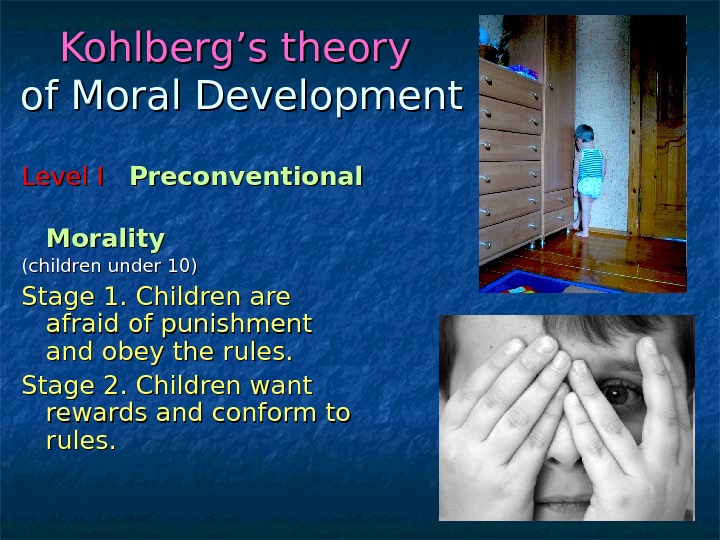 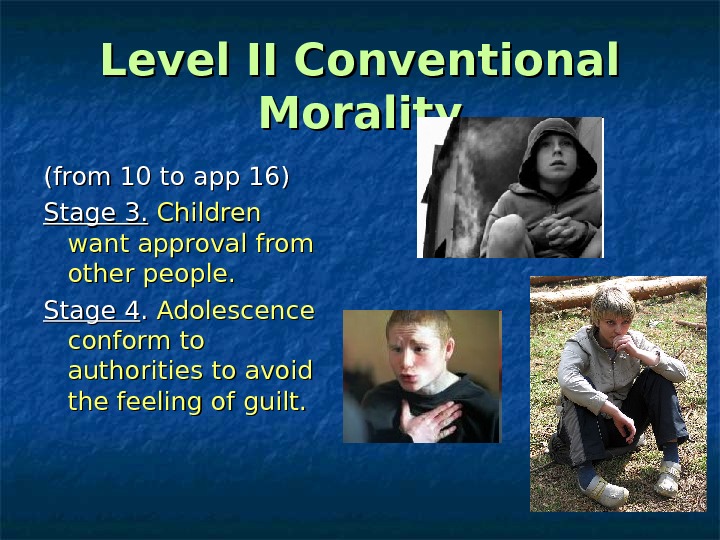 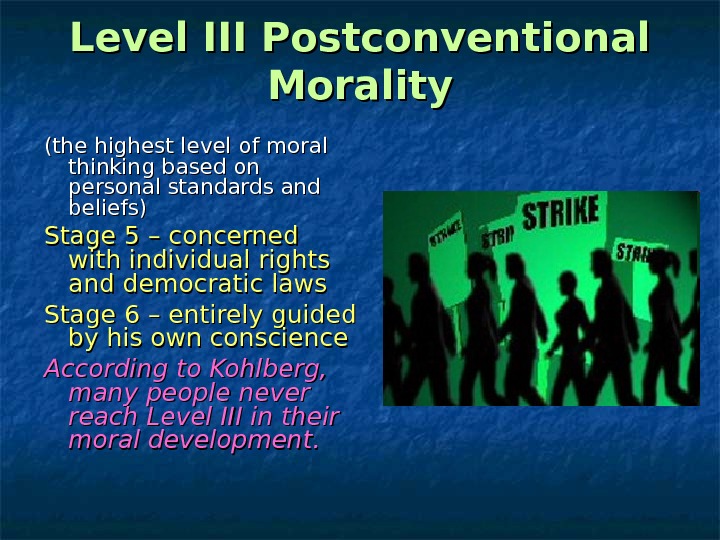 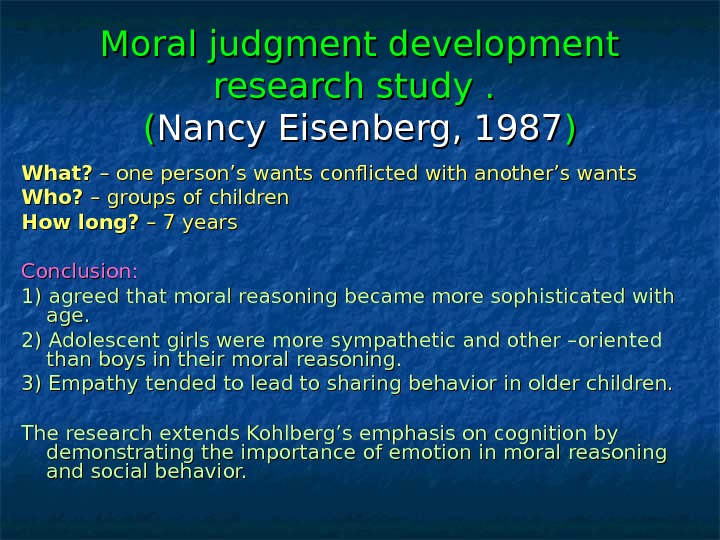 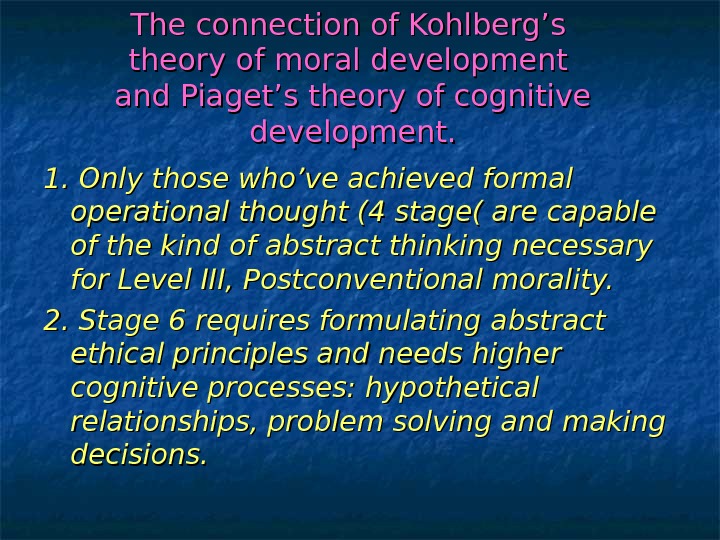 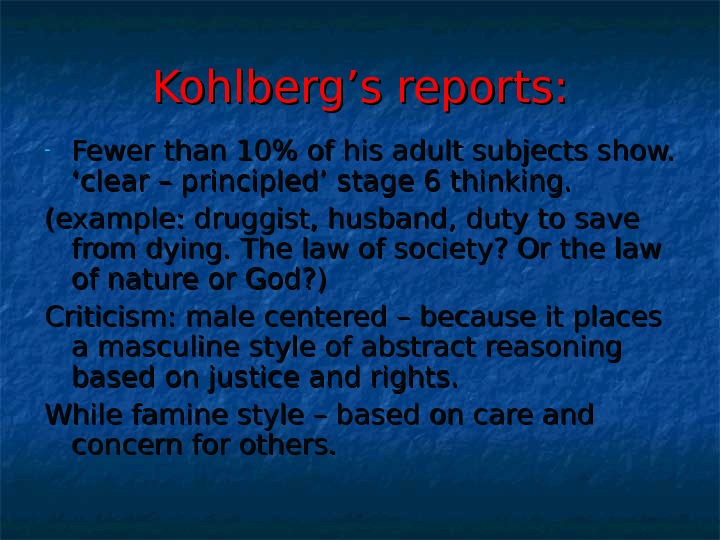 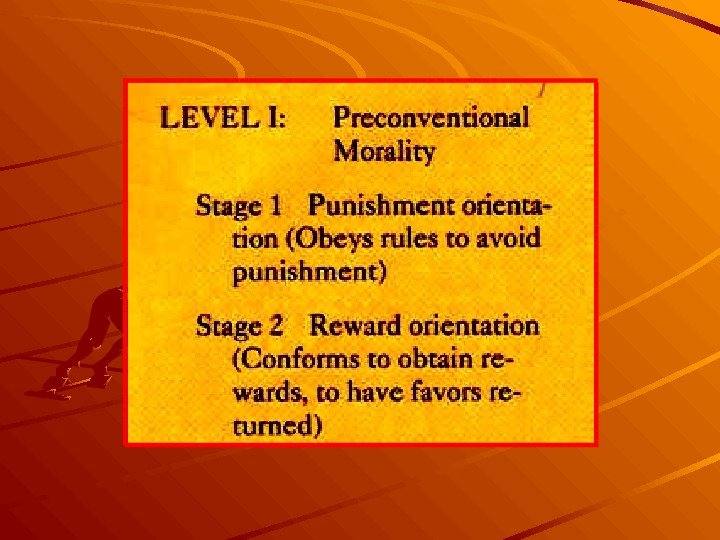 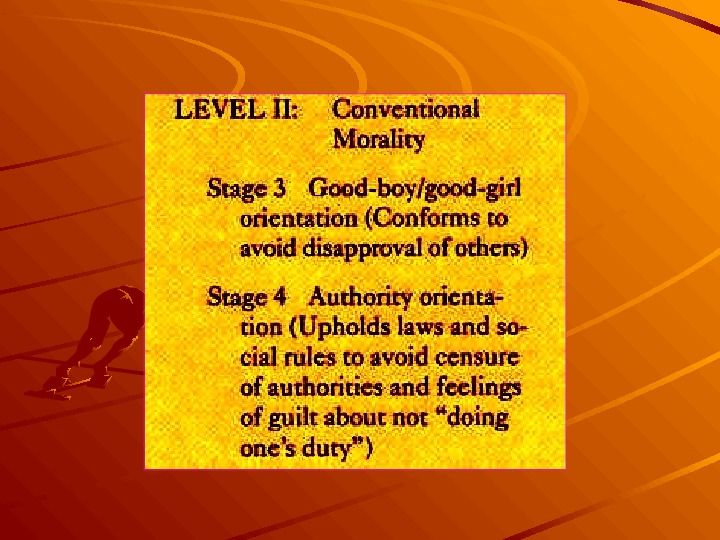 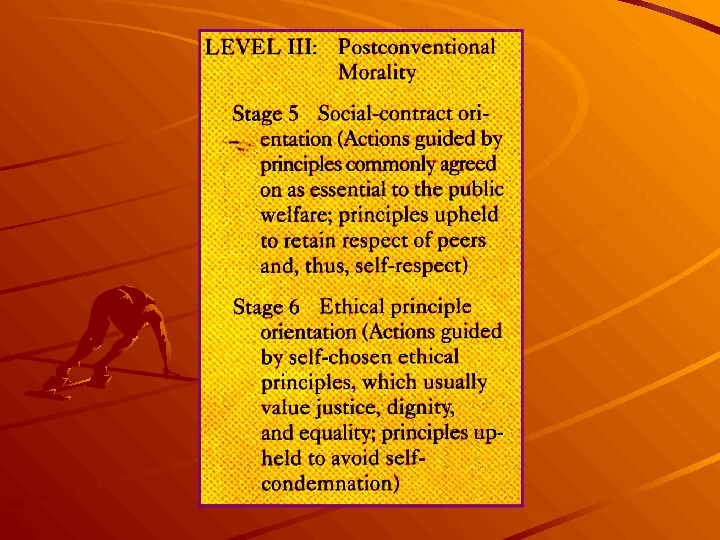 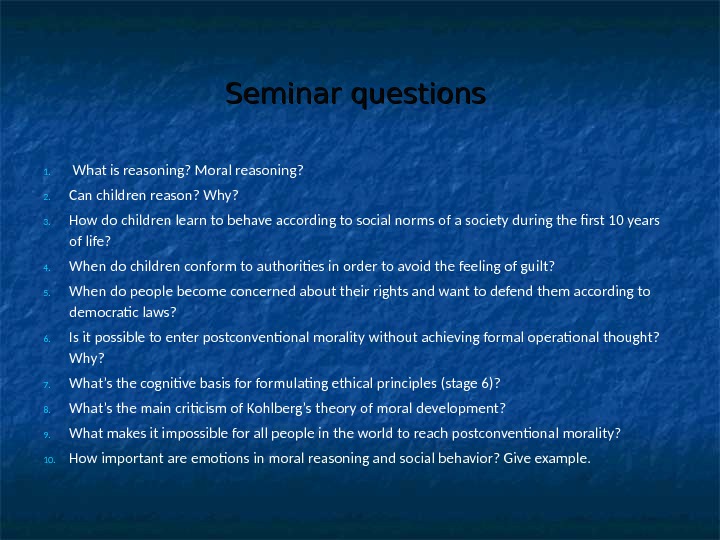 Can children reason? Yes — Babies’ exploration of their environment — Using past knowledge in analogical ways to solve problems — Can solve a problem: a. There is a link to past knowledge b. The problem is clearly understood c. Does not overload working memory No. No — It’s often weaker than that of adults: the younger the child, the poorer the knowledge about the problem. — It’s clear that knowledge has benefits for reasoning Increased knowledge is a key factor in the development of problem solving -Can be improved by making children think more strategically and methodically

Moral Reasoning The way a child reasons about right and wrong, his awareness of ethical behavior. Cognitive processes by which individually make decisions about moral issues and justify these decisions

Kohlberg’s theory of Moral Development Level I Preconventional Morality (children under 10) Stage 1. Children are afraid of punishment and obey the rules. Stage 2. Children want rewards and conform to rules.

Level II Conventional Morality (from 10 to app 16) Stage 3. Children want approval from other people. Stage 4. . Adolescence conform to authorities to avoid the feeling of guilt.

Level III Postconventional Morality (the highest level of moral thinking based on personal standards and beliefs) Stage 5 – concerned with individual rights and democratic laws Stage 6 – entirely guided by his own conscience According to Kohlberg, many people never reach Level III in their moral development.

Moral judgment development research study. (( Nancy Eisenberg, 1987 )) What? – one person’s wants conflicted with another’s wants Who? – groups of children How long? – 7 years Conclusion: 1) agreed that moral reasoning became more sophisticated with age. 2) Adolescent girls were more sympathetic and other –oriented than boys in their moral reasoning. 3) Empathy tended to lead to sharing behavior in older children. The research extends Kohlberg’s emphasis on cognition by demonstrating the importance of emotion in moral reasoning and social behavior.

Kohlberg’s reports: — Fewer than 10% of his adult subjects show. ‘clear – principled’ stage 6 thinking. (example: druggist, husband, duty to save from dying. The law of society? Or the law of nature or God? ) Criticism: male centered – because it places a masculine style of abstract reasoning based on justice and rights. While famine style – based on care and concern for others.

Seminar questions 1. What is reasoning? Moral reasoning? 2. Can children reason? Why? 3. How do children learn to behave according to social norms of a society during the first 10 years of life? 4. When do children conform to authorities in order to avoid the feeling of guilt? 5. When do people become concerned about their rights and want to defend them according to democratic laws? 6. Is it possible to enter postconventional morality without achieving formal operational thought? Why? 7. What’s the cognitive basis formulating ethical principles (stage 6)? 8. What’s the main criticism of Kohlberg’s theory of moral development? 9. What makes it impossible for all people in the world to reach postconventional morality? 10. How important are emotions in moral reasoning and social behavior? Give example.