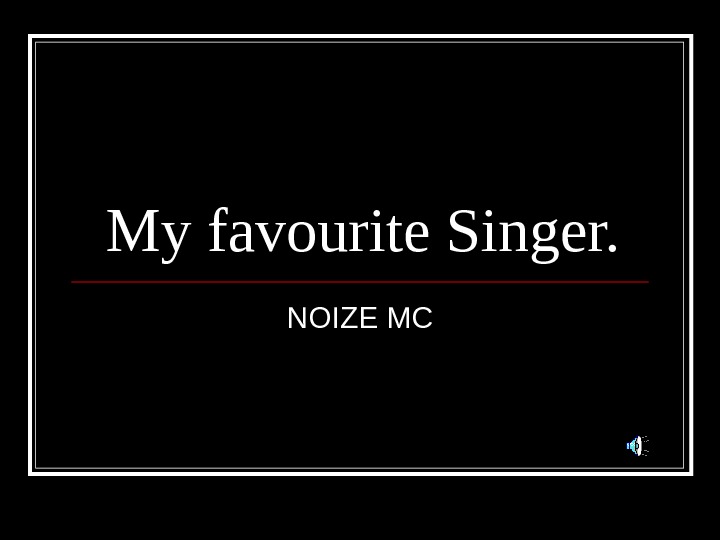 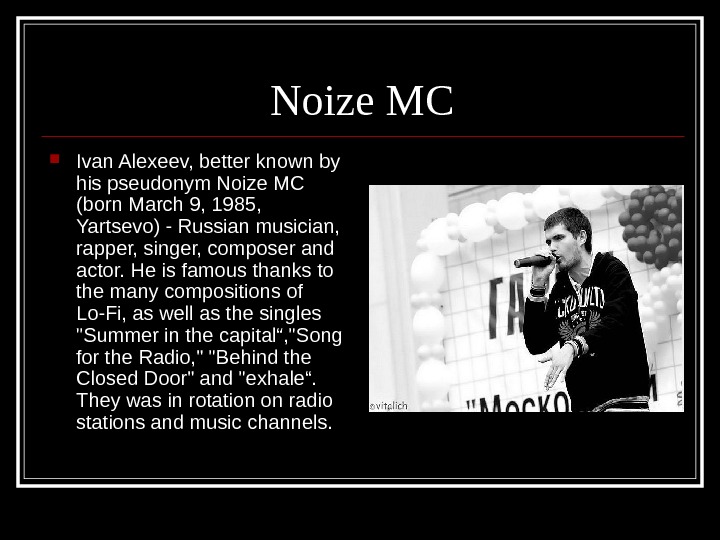 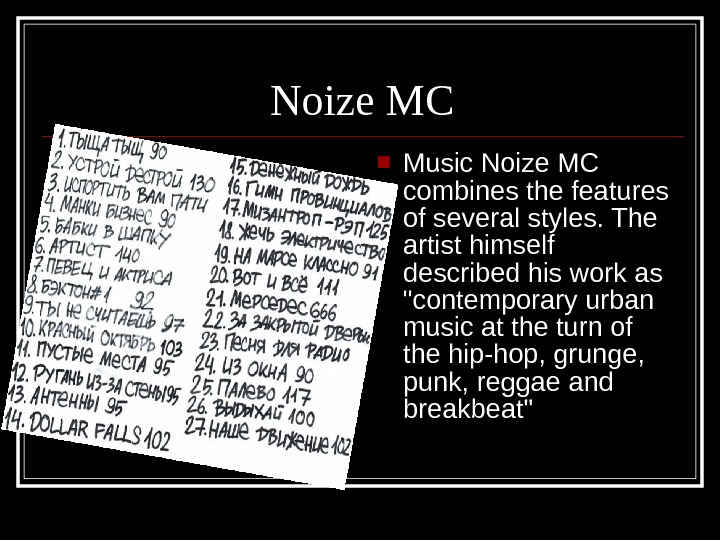 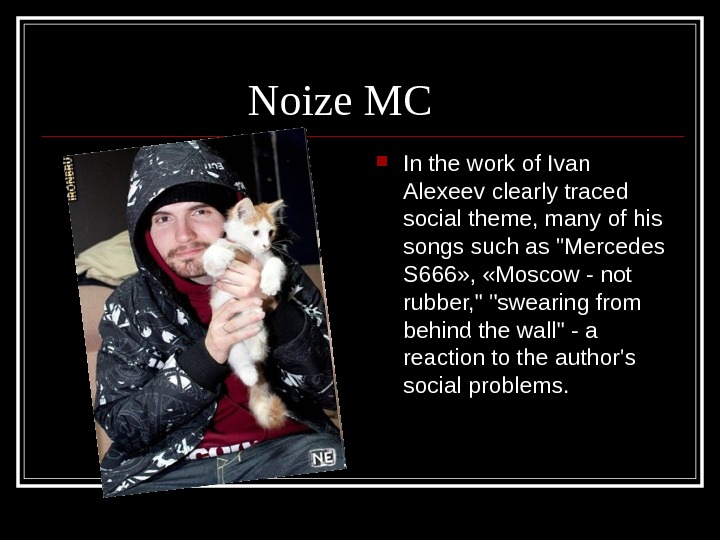 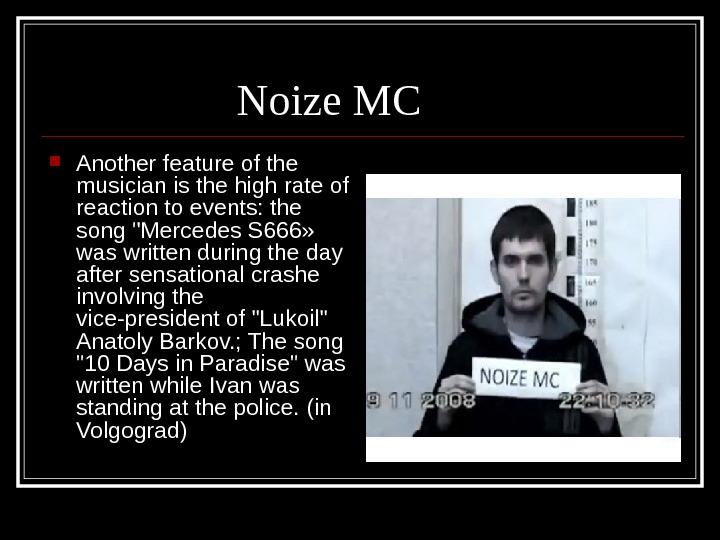 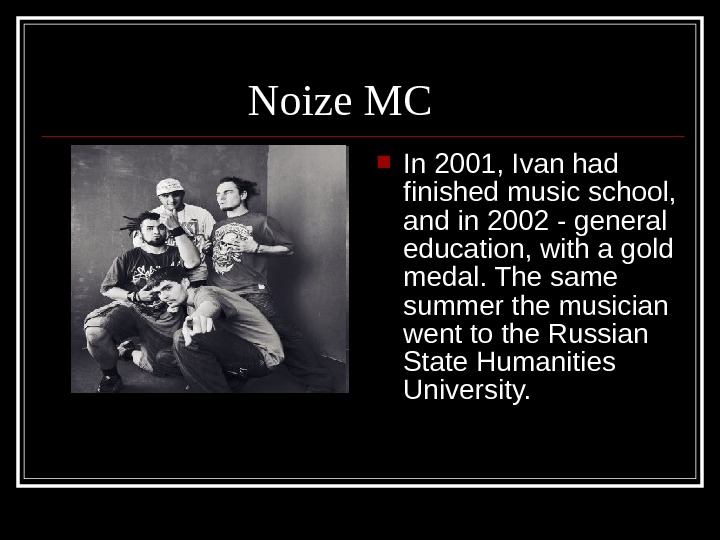 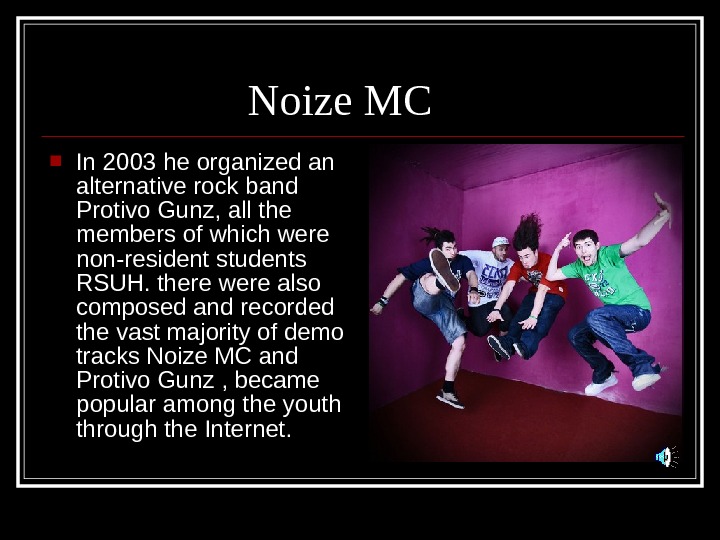 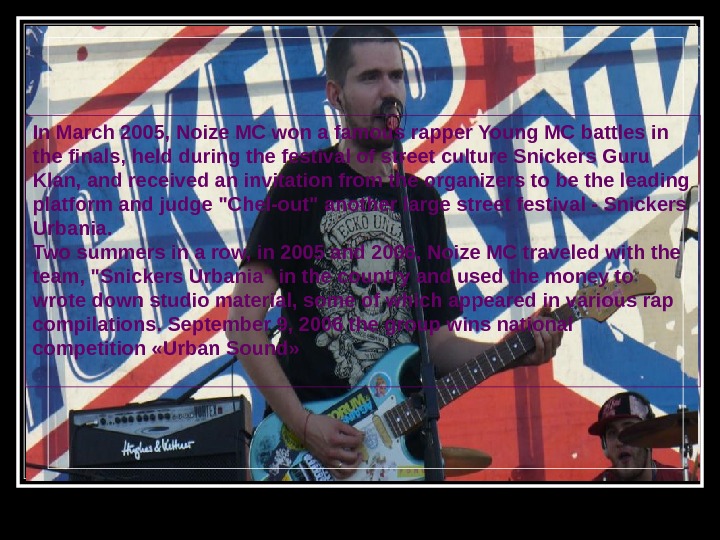 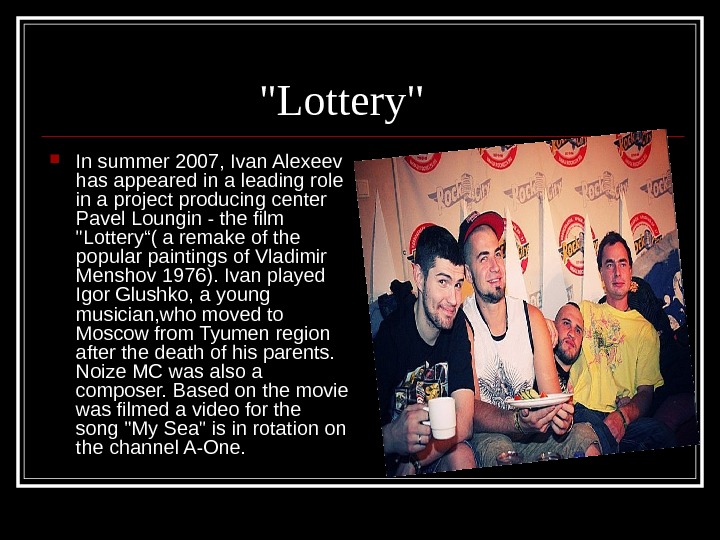 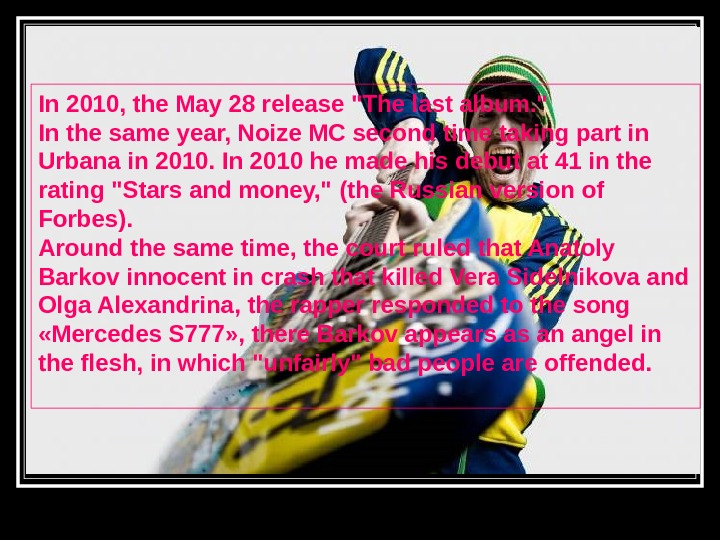 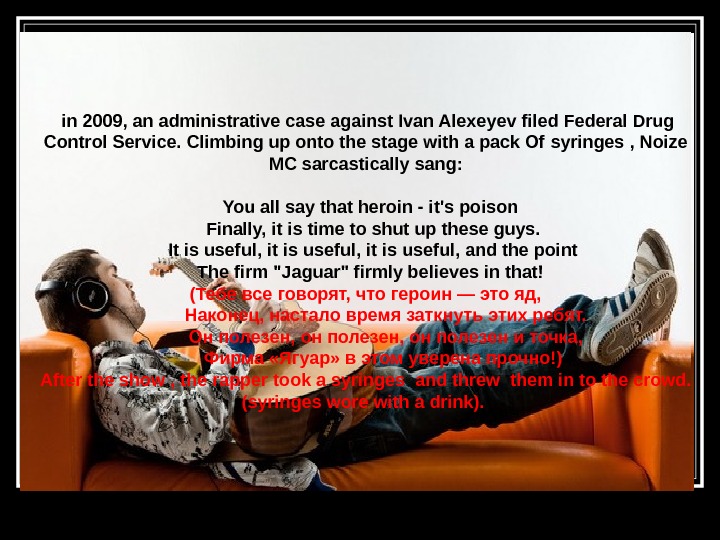 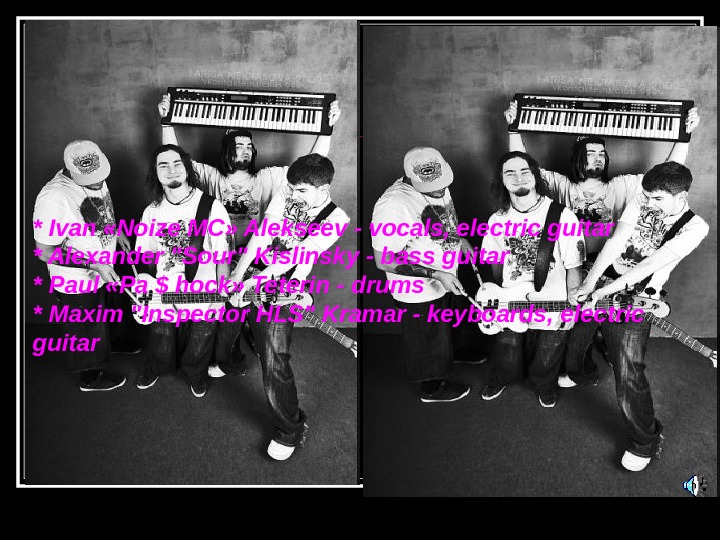 Noize MC Ivan Alexeev, better known by his pseudonym Noize MC (born March 9, 1985, Yartsevo) — Russian musician, rapper, singer, composer and actor. He is famous thanks to the many compositions of Lo-Fi, as well as the singles «Summer in the capital“, «Song for the Radio, » «Behind the Closed Door» and «exhale“. They was in rotation on radio stations and music channels.

Noize MC Music Noize MC combines the features of several styles. The artist himself described his work as «contemporary urban music at the turn of the hip-hop, grunge, punk, reggae and breakbeat»

Noize MC In the work of Ivan Alexeev clearly traced social theme, many of his songs such as «Mercedes S 666» , «Moscow — not rubber, » «swearing from behind the wall» — a reaction to the author’s social problems.

Noize MC Another feature of the musician is the high rate of reaction to events: the song «Mercedes S 666» was written during the day after sensational crashe involving the vice-president of «Lukoil» Anatoly Barkov. ; The song «10 Days in Paradise» was written while Ivan was standing at the police. (in Volgograd)

Noize MC In 2001, Ivan had finished music school, and in 2002 — general education, with a gold medal. The same summer the musician went to the Russian State Humanities University.

Noize MC In 2003 he organized an alternative rock band Protivo Gunz, all the members of which were non-resident students RSUH. there were also composed and recorded the vast majority of demo tracks Noize MC and Protivo Gunz , became popular among the youth through the Internet.

In March 2005, Noize MC won a famous rapper Young MC battles in the finals, held during the festival of street culture Snickers Guru Klan, and received an invitation from the organizers to be the leading platform and judge «Chel-out» another large street festival — Snickers Urbania. Two summers in a row, in 2005 and 2006, Noize MC traveled with the team, «Snickers Urbania» in the country and used the money to wrote down studio material, some of which appeared in various rap compilations. September 9, 2006 the group wins national competition «Urban Sound »

«Lottery» In summer 2007, Ivan Alexeev has appeared in a leading role in a project producing center Pavel Loungin — the film «Lottery“( a remake of the popular paintings of Vladimir Menshov 1976). Ivan played Igor Glushko, a young musician, who moved to Moscow from Tyumen region after the death of his parents. Noize MC was also a composer. Based on the movie was filmed a video for the song «My Sea» is in rotation on the channel A-One.

In 2010, the May 28 release «The last album. » In the same year, Noize MC second time taking part in Urbana in 2010. In 2010 he made his debut at 41 in the rating «Stars and money, » ( the Russian version of Forbes ). Around the same time, the court ruled that Anatoly Barkov innocent in crash that killed Vera Sidelnikova and Olga Alexandrina, the rapper responded to the song «Mercedes S 777» , there Barkov appears as an angel in the flesh, in which «unfairly» bad people are offended.

in 2009, an administrative case against Ivan Alexeyev filed Federal Drug Control Service. Climbing up onto the stage with a pack Of syringes , Noize MC sarcastically sang: You all say that heroin — it’s poison Finally, it is time to shut up these guys. It is useful, it is useful, and the point The firm «Jaguar» firmly believes in that! ( Тебе все говорят, что героин — это яд, Наконец, настало время заткнуть этих ребят. Он полезен, он полезен и точка, Фирма «Ягуар» в этом уверена прочно! ) After the show , the rapper took a syringes and threw them in to the crowd. ( syringes wore with a drink).