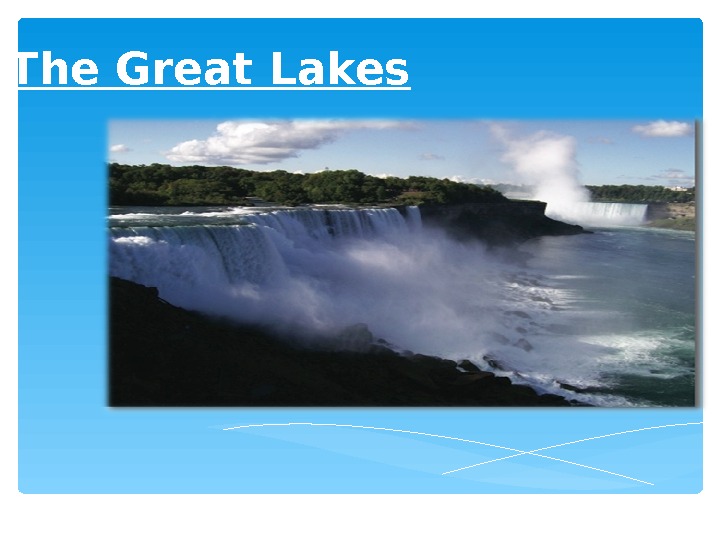 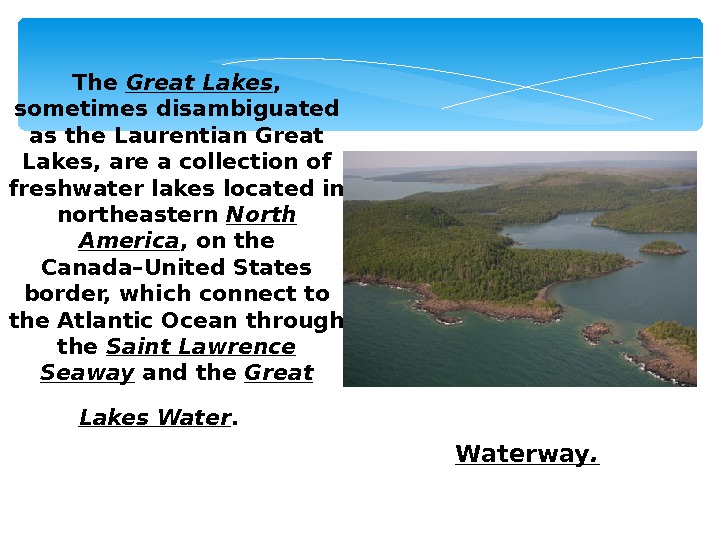 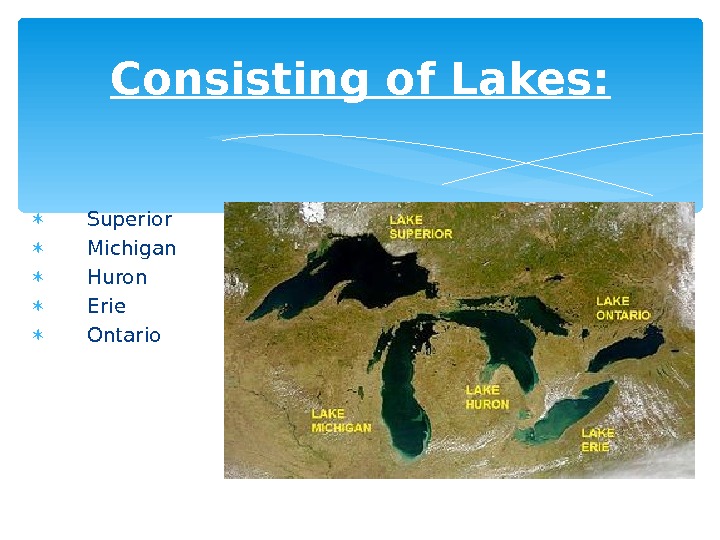 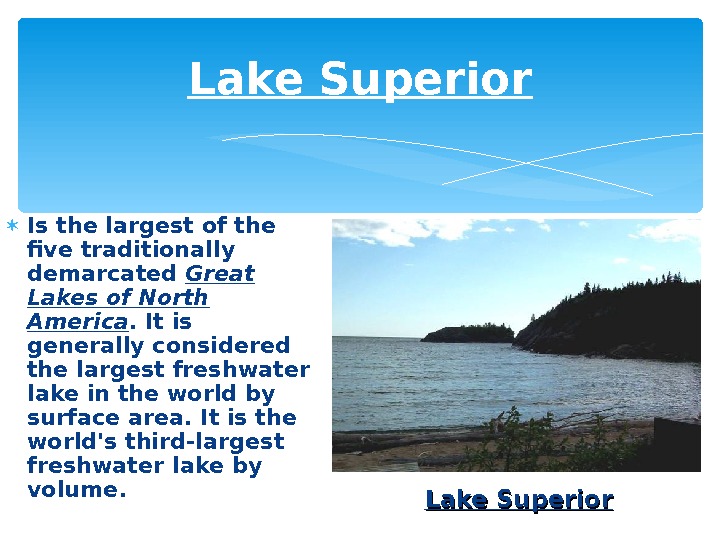 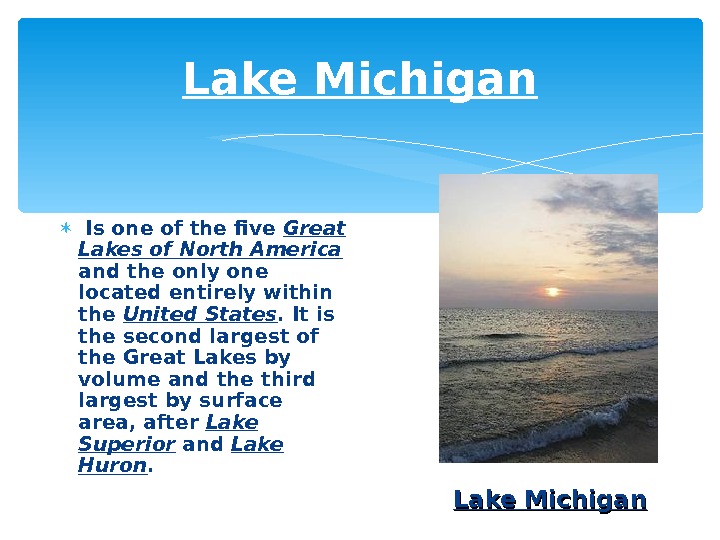 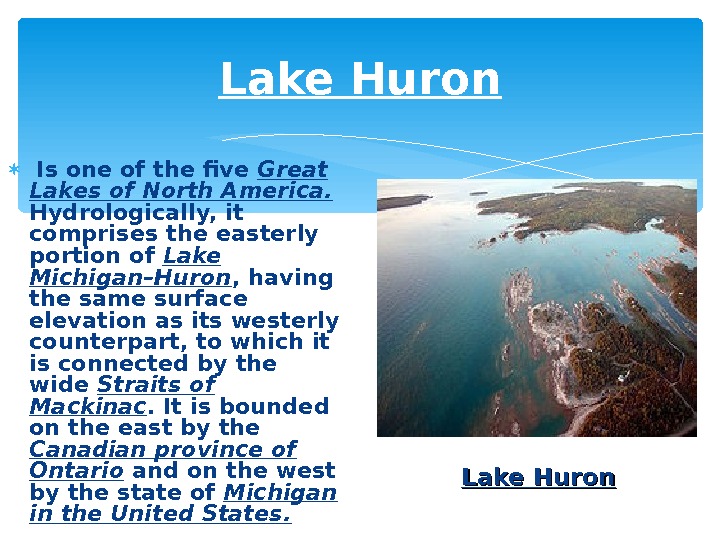 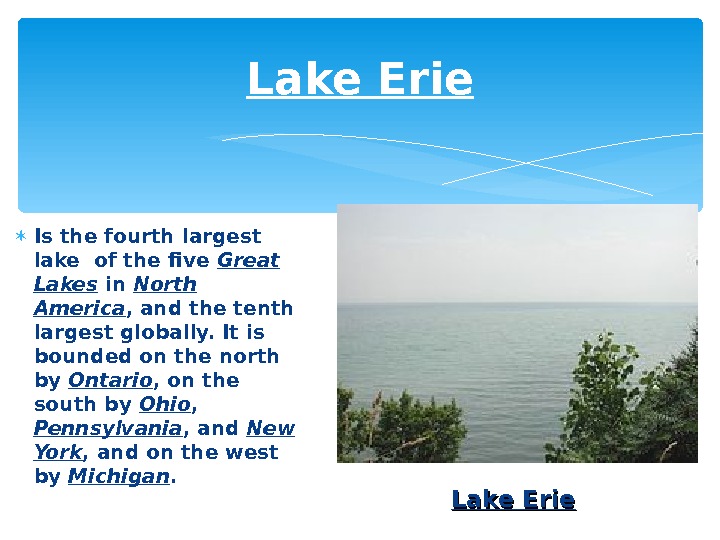 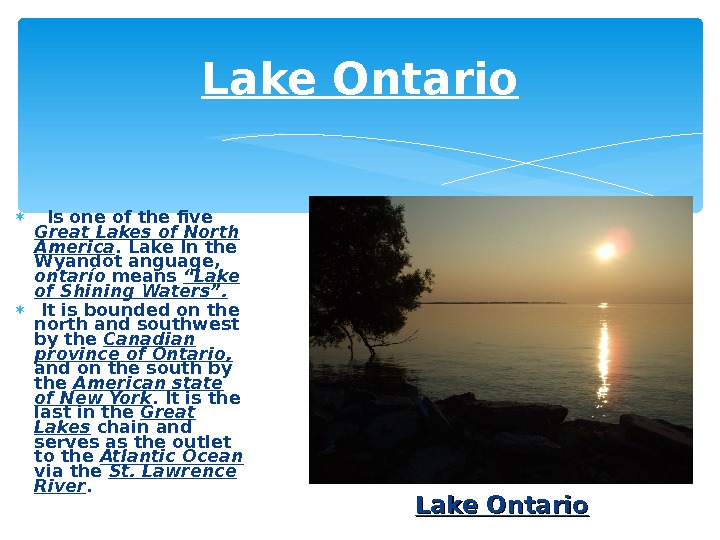 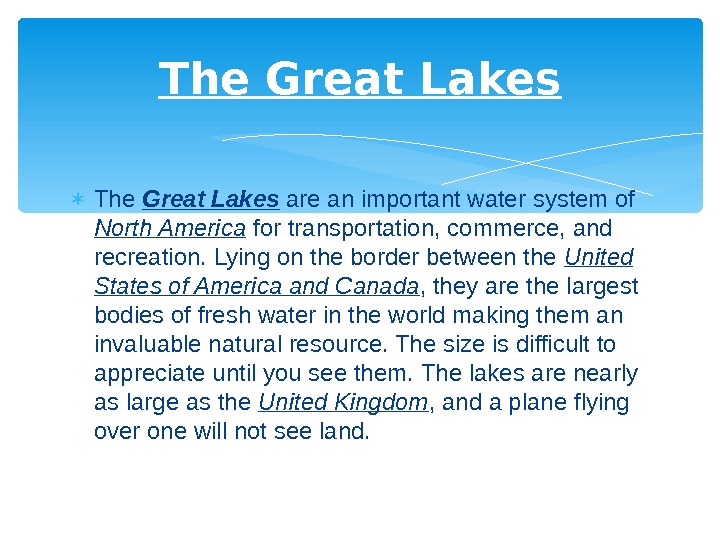 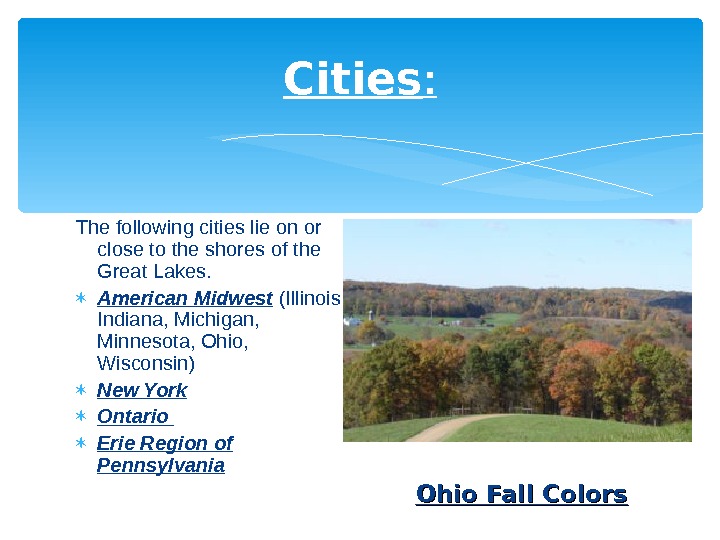 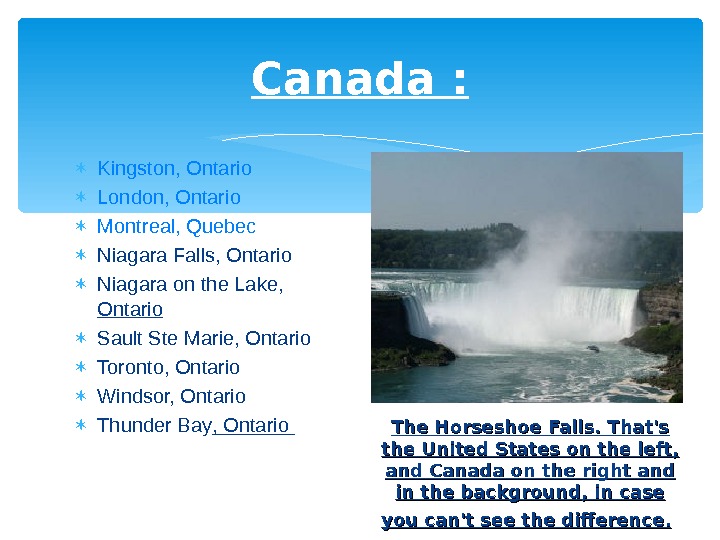 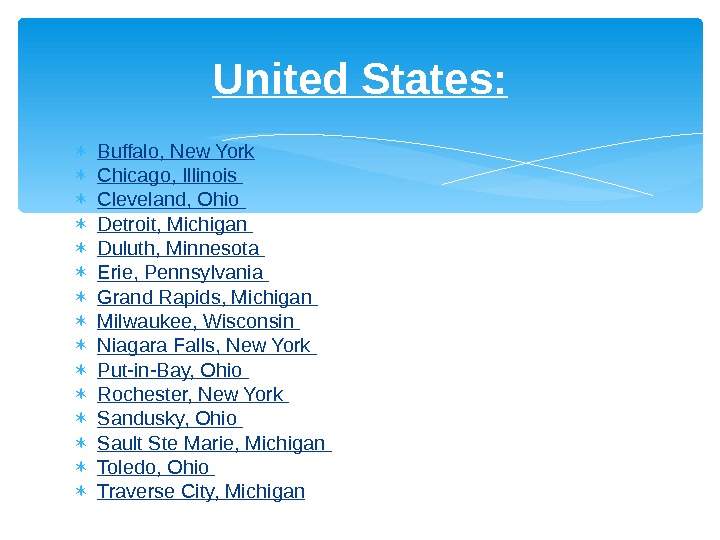 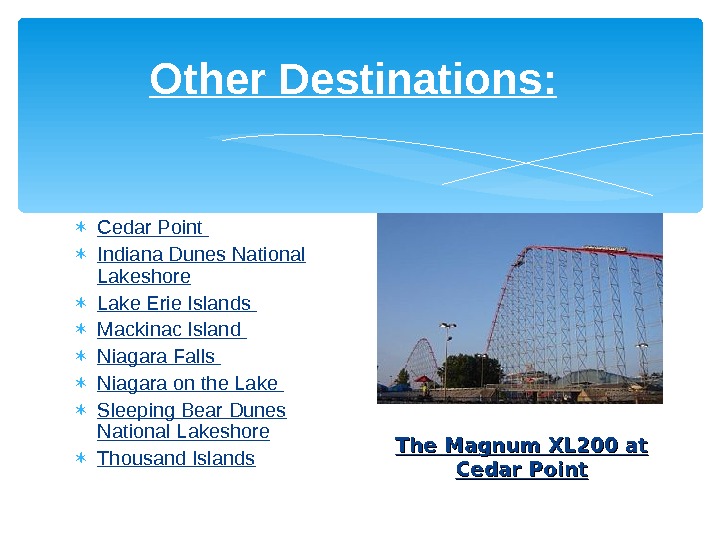 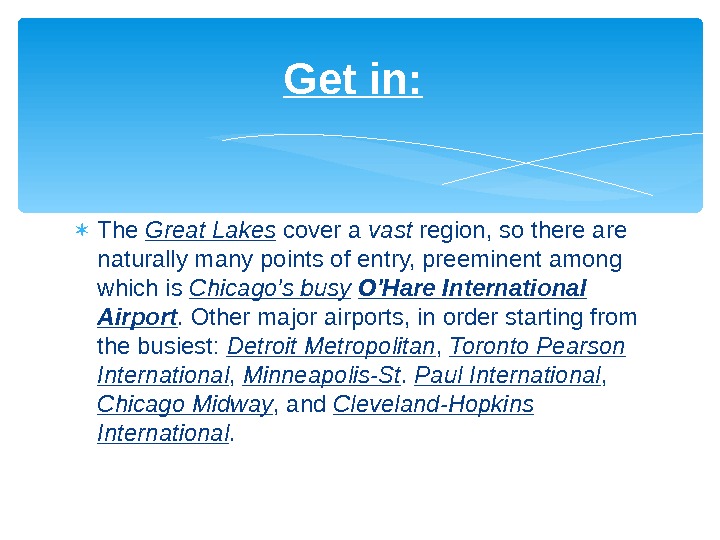 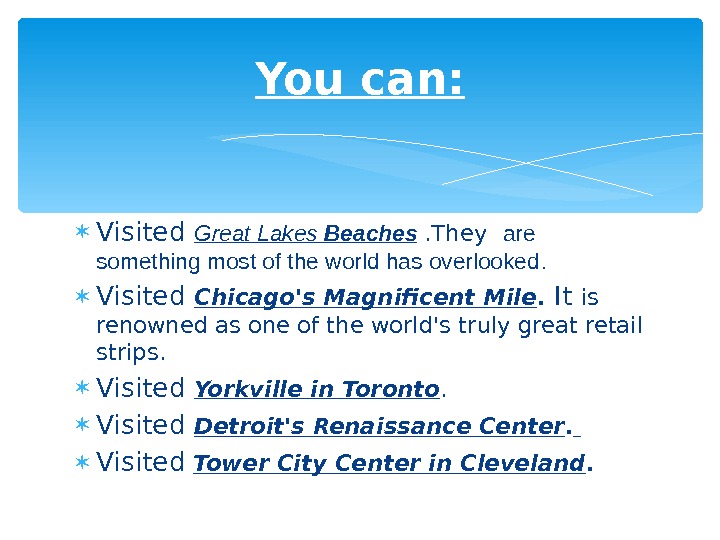 The Great Lakes , sometimes disambiguated as the Laurentian Great Lakes, are a collection of freshwater lakes located in northeastern North America , on the Canada–United States border, which connect to the Atlantic Ocean through the Saint Lawrence Seaway and the Great Lakes Water. Waterway.

Lake Michigan I s one of the five Great Lakes of North America and the only one located entirely within the United States. It is the second largest of the Great Lakes by volume and the third largest by surface area, after Lake Superior and Lake Huron. Lake Michigan

Lake Huron I s one of the five Great Lakes of North America. Hydrologically, it comprises the easterly portion of Lake Michigan–Huron , having the same surface elevation as its westerly counterpart, to which it is connected by the wide Straits of Mackinac. It is bounded on the east by the Canadian province of Ontario and on the west by the state of Michigan in the United States. Lake Huron

Lake Erie I s the fourth largest lake of the five Great Lakes in North America , and the tenth largest globally. It is bounded on the north by Ontario , on the south by Ohio , Pennsylvania , and New York , and on the west by Michigan. Lake Erie

Lake Ontario I s one of the five Great Lakes of North America. Lake In the Wyandot anguage, ontarío means “Lake of Shining Waters”. It is bounded on the north and southwest by the Canadian province of Ontario, and on the south by the American state of New York. It is the last in the Great Lakes chain and serves as the outlet to the Atlantic Ocean via the St. Lawrence River. Lake Ontario

The Great Lakes are an important water system of North America for transportation, commerce, and recreation. Lying on the border between the Unite d States of America and Canada , they are the largest bodies of fresh water in the world making them an invaluable natural resource. The size is difficult to appreciate until you see them. T he lakes are nearly as large as the United Kingdom , and a plane flying over one will not see land. The Great Lakes

Get in : The Great Lakes cover a vast region, so there are naturally many points of entry, preeminent among which is Chicago’s busy O’Hare Internationa l Airport. Other major airports, in order starting from the busiest: Detroit Metropolitan , Toronto Pearson International , Minneapolis-St. Paul International , Chicago Midway , and Cleveland-Hopkins International.

You can: Visited Great Lakes Beaches . They are something most of the world has overlooked. Visited Chicago’s Magnificent Mile. It is renowned as one of the world’s truly great retail strips. Visited Yorkville in Toronto. Visited Detroit’s Renaissance Center. Visited Tower City Center in Cleveland.